In preparation for Cesar Chavez and Dolores Huerta day, let’s learn more about two impactful  individuals who strived to improve the lives of working farmers in the United States.

Cesar Chavez was born in Yuma, Arizona on March 31st, 1927.  During the Great Depression, he and his family moved to California to become migrant farm workers. Cesar attended school until the 8th grade, but had to drop out to work full-time in the fields. In 1946, he After joining the U.S. army in 1946 and serving, he returned to the fields to continue work.

As Chavez and his family were farm workers, they witnessed and experienced the reality of unjust work conditions for the farm workers. Inspired by Gandhi and St. Francis of Assisi, in 1952, Cesar began to organize grassroots campaigns for the Latino civil rights group, the Community Service Organization (CSO). As a grassroot organizer, “he worked to register new voters and fight racial and economic discrimination”  (“Cesar Chavez”).  At one point, he became the organization’s national director but resigned in 1962 due to the lack of support for his efforts. Instead, he made a new path and founded the National Farm Workers Association (NFWA) with Dolores Huerta.

Huerta and Chavez worked side by side in the National Farm Workers Association ( NFWA), traveling to various regions with the intention of recruiting new members. As Chavez continued his work, his wife Helen stayed and worked in the fields in order to support their family.

By September of 1965, Chavez’s NFWA joined together with the Agricultural Workers Organizing Committee (AWOC), Filipino-American labor group. One year later, Chavez led a 340 mile march from Delano, CA to Sacramento, CA. In the same year, the NWFA and AWOC merged together to form the United Farm Workers Organization and in 1971, became known as the “United Farm Workers of America (UFW). Within the efforts of the UFW, the state of California granted farm workers the approval of unionizing and negotiating for better work conditions. 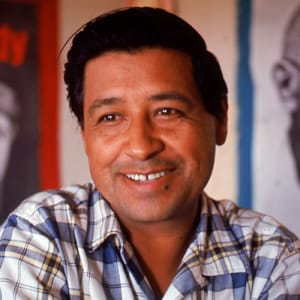 Cesar Chavez’s work throughout his life did not go unnoticed. Although Chavez passed away on April 23, 1993, “President Bill Clinton awarded him a posthumous Presidential Medal of Freedom, the nation’s highest civilian award”, and even former U.S. President, “Barack Obama borrowed a Chavez slogan — Si, se puede, or ‘Yes, we can’ — during his successful run to become the first Black U.S. president in 2008” (“Cesar Chavez”). Despite his work for the betterment of farm workers, not all in the Latinx community loved him; in particular, the undocumented community had mixed feelings about Cesar Chavez. According to Ted Hesson, “Chavez opposed illegal immigration” and, while Chavez stood up for farm workers, Chavez was against undocumented immigrants entering the U.S., so much so that he advocated that others join “wet-lines” to prevent the entry of undocumented immigrants  (Hesson, 2013). He did this because farm owners would employ undocumented immigrants to break union and protests that Chavez and the NFWA would employ, exploiting and paying the undocumented workers even less than the farmworkers. Although his work may seem contradictory, Chavez was able to improve the lives of documented farm workers. According to Mike O’ Sullivan, “He had a lot of flaws, and in some ways, he contributed to some of the union’s decline. But he was an enormously heroic figure whose achievements should be studied and celebrated” (O’Sullivan, 2018). 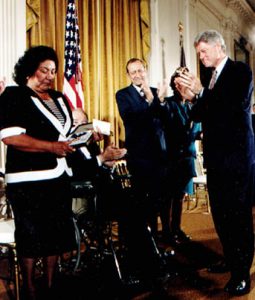 As Cesar Chavez made history for working farmers, he also stated: “I am convinced that the truest act of courage, the strongest act of manliness, is to sacrifice ourselves for others in a totally non-violent struggle for justice. To be a man is to suffer for others. God help us be men” – Cesar Chavez.

Dolores Huerta was a political activist who worked alongside Chavez to shape history for the betterment of farmworkers in the U.S. 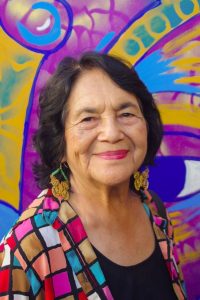 Huerta was born on April 10, 1930 in Dawson, New Mexico to Mexican immigrants. Growing up, she and her family experienced racism, from teachers not believing Dolores should be excelling at school assignments, to white men harassing her brother for wearing a popular Latino fashion, the Zoot Suit. These discriminatory events helped shape Huerta into the person she is today.

As a teacher in the 1950s, Huerta saw hungry farm children first-hand which influenced her to take action to improve the living and working conditions for farm workers and their families. Huerta co-founded the Stockton chapter of the Community Service Organization (CSO) which aimed to improve the economic system for Hispanics. In addition to the CSO, she founded the Agricultural Workers Association.

Huerta met Chavez through the CSO in the end and their common interest regarding workers’ rights continued to help the betterment of farmworkers’ conditions. Together, they founded the National Farm Workers Association (NFWA) in 1962 and later onto the United Farm Workers’ Union (UFW). Huerta served as the vice president of the UFW, but also took the lead in many of the projects she worked on throughout her life. Within the UFW, “Huerta organized workers, negotiated contracts, advocated for safer working conditions including the elimination of harmful pesticides. She also fought for unemployment and healthcare benefits for agricultural workers” (Michals, 2015).

Between the 1990s and 2000s, Huerta encouraged more Latinx individuals and women in general to join political offices and address women’s issues. In 1990, Huerta was presented with the Eleanor Roosevelt Human Rights Award and the Presidential Medal of Freedom in 2012. Three years later, Huerta expanded her professional career and worked as the Secretary-Treasurer Emeritus of the United Farm Workers of America, a board member for the Feministy Majority Foundation, and the president of her own Dolores Huerta Foundation. 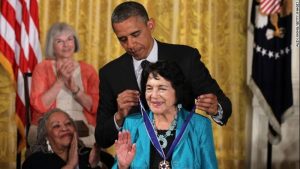 To this day, Dolores Huerta continues to hold speeches, virtual conferences, and talks, inspiring others to stand in support of the Latinx community, people of colors, the LGBTQ+ community, and more, believing that it is important for people to come together and advocate for each other.

Be sure to attend MU Avanzamos’ events on March 31st for the Cesar Chavez & Dolores Huerta Day: A Day of Advocacy to get more involved on the social justice issues within the DMV area. More details on the Avanzamos’ Engage page!