Ever since a young age, I knew I wanted to travel the world. Because of that, studying abroad had always been a dream of mine! Luckily, Marymount has a significant amount of countries one can visit to explore the world and develop cultural awareness which I took advantage of.

Last semester, I traveled to Medellin, Colombia. When I arrived, it didn’t take too long for me to understand the fact that Colombians are sick of being associated with “Narcos” because Colombia has changed significantly since the Civil wars between Narcos, the government, and paramilitaries of the last few decades.

The growth of drug trafficking and the Guerilla Warfare itself impacted Colombia negatively politically, socially, and economically. I remember when I was about to get on a metro cable on the trip, I asked one of our student leaders from Medellin about her thoughts on Pablo Escobar and what he did. I knew this was probably not a question to ask everyone there, and I had to be careful. However, I felt the need to ask because I wanted to be informed upon the perspective of the people in Colombia. She stared at me for a second and looked disgusted before she told me he destroyed a beautiful country. However, with time, the people of Colombia have reconstructed and advocated for a better lifestyle. While walking through Comunas, beautiful communities divided into neighborhoods, it was clear that their communities were being built with hard work even though there was a lack of financial stability.  Nevertheless, the lack of financial stability and resources did not stop the people of the comunas. 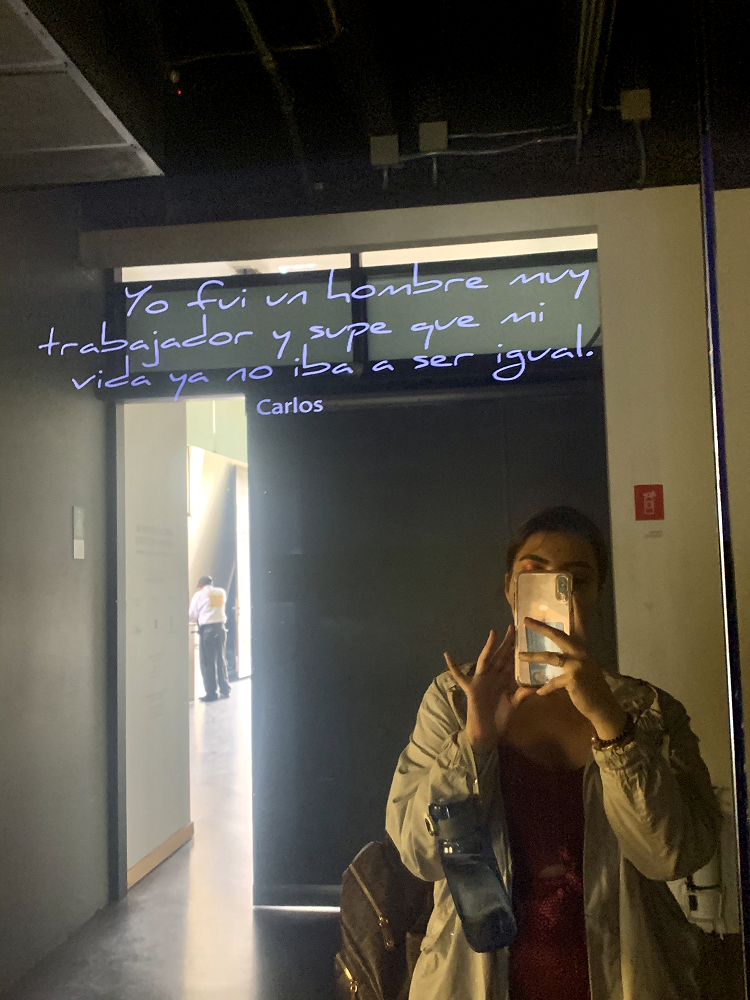 Museo Casa de la Memoria (Memory House Museum) slideshow of dialogue of individuals who were part of a Colombian war and armed conflicts. The text says “I was a man, very hardworking, and I knew that my life would no longer be the same”- Carlos

Having taken my Sociology 395 global classroom course “Cities in the 21st Century” with Dr. Lindsey, I learned about global networks of specific cities, changes in urban form, environmental problems, the role of technologies and knowledge with the big challenge of urban governance. We also learned how rapid urbanization worldwide implies an increase in the number of population in cities. I was ready to see that visually for our study abroad program in Medellin, Colombia. 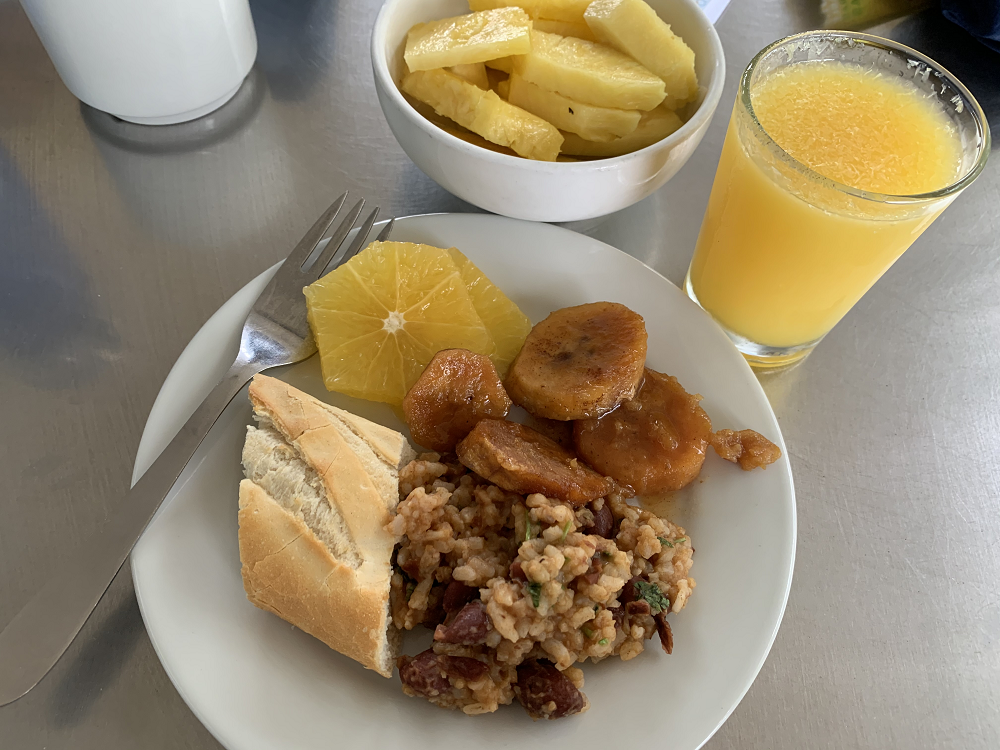 Visiting Medellin became a very inspirational experience for me because I learned that Medellin had always been shown to have a single story, one of violence, and while it may have been part of the story at one point, it was not the whole picture of what Medellin was or currently is. Walking around the different comunas of comuna 1 and 8, I quickly picked up that there was a community empowerment going on that was being built on by the residents. The study abroad group I went with and I were introduced to UVA’S. What are UVA’s you might be asking yourself? UVA’s are abandoned urban spaces that are created to create new public places for interaction, recreation, and community participation. Making complete sense due to the fact that UVA stands for Unidad de Vida Articulada or Articulated Life Unit. 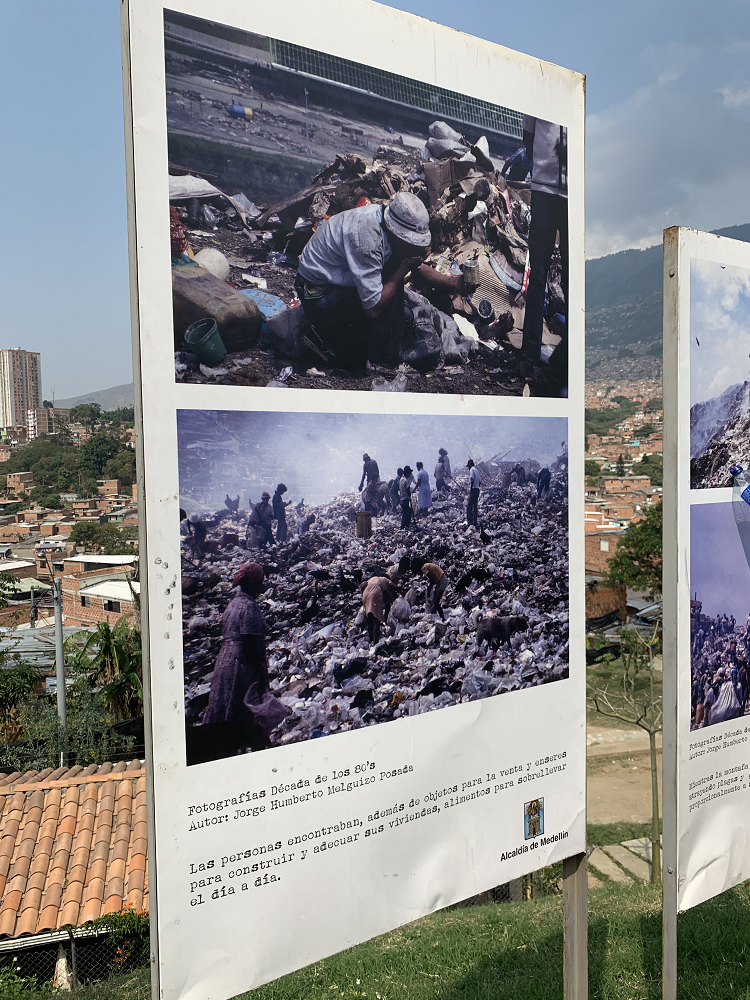 A poster I saw while roaming around in a Comuna that emphasized the history of their environmental issues and the progress it has made since then.

The most eye-catching UVA for me was the UVA de la Imaginacion which focused on comuna 8 of more than 26,000 people who were set to benefit from this wonderful project which officially opened on December 29, 2015. This was so inspiring because it was not only a new icon of sustainable design and urban architecture, but it led to a cultural transformation in many comunas, inspiring them to get UVAs too. I’m glad to say there is more than one UVA in Colombia because of this. It was shocking to listen to the story behind this UVA and how it positively impacted Medellin! 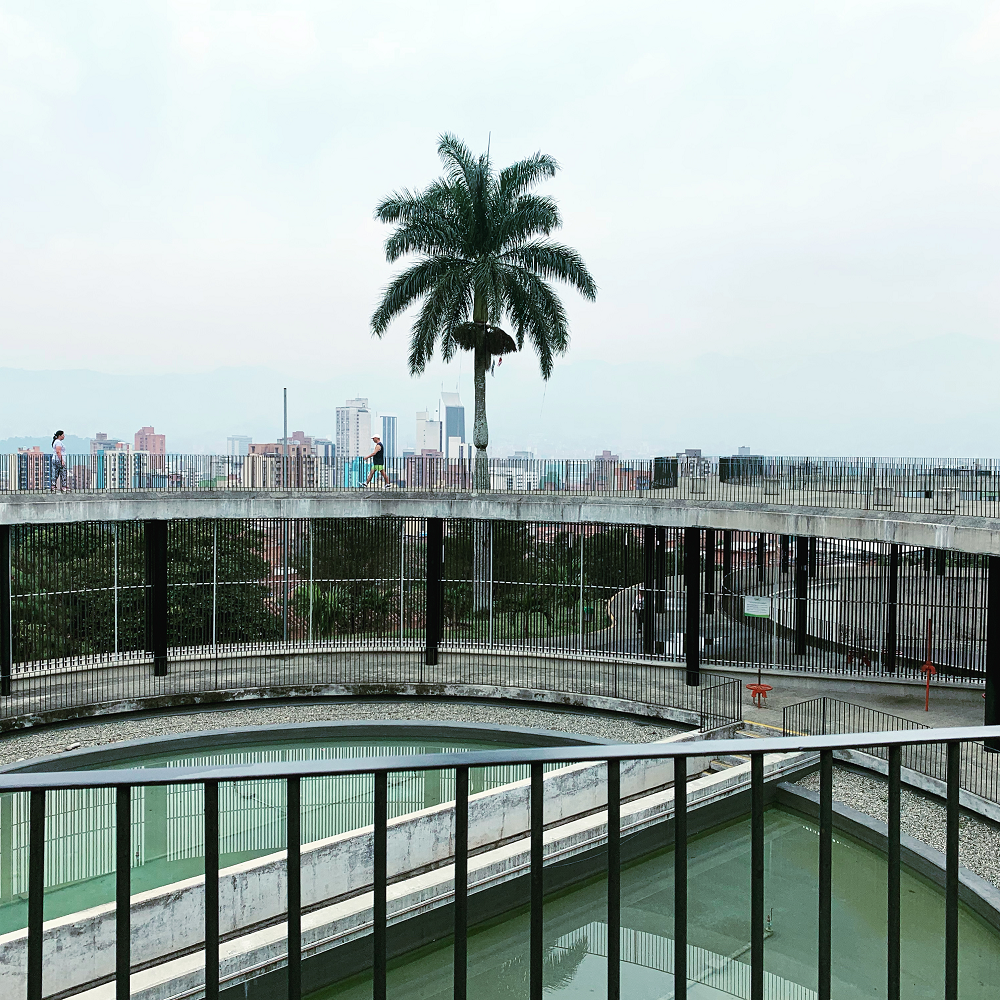 This is the la UVA de Imaginacion where the Colombian city’s infrastructure built a water tank to obtain and give access to the community around them. Every UVA has a water tank and in locations that once were very violent and acquired conflicts. With now, an inspiring, positive impact continuing to prosper.

Throughout the week in Colombia, I also met many students and staff at EAFIT University, “la Universidad Eafit.” There, we took a few classes and sessions where we focused on the environmental issues in Medellin and the urbanization that has been going on for years. The professor at EAFIT informed us about residents in some comunas and students in EAFIT’s goal of creating a better mapping of transportation and the causes and impacts environmental issues have in certain locations. In fact, they are currently trying to see how the city and transportation is impacting the environment and daily lives. Additionally, we were also always doing some type of fun and creative activity. For example, my friends and I created a blueprint of what a comuna should look like to inspire others. Reflecting on these projects, traveling to Colombia opened my eyes to new forms of development because the lower class neighborhoods started grassroots community projects to help each other before the government and higher officials constructed a better environment for them. Although some comunas aren’t the best and aren’t extremely clean and safe, there has been progress. Progress that has helped individuals in the community and their families. Progress towards a better life. 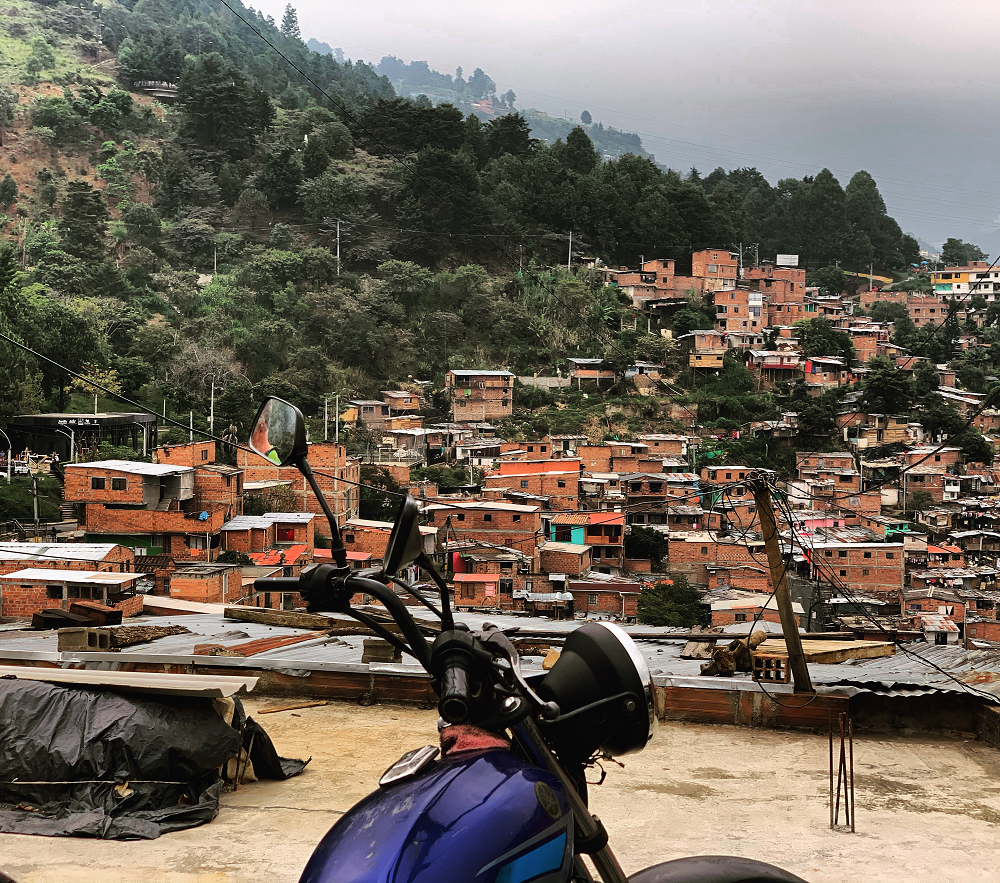 Overlooking a comuna in Medellin

The community itself was the highlight of my whole study abroad experience: to see how small each community and neighborhood is, yet how powerful they can be. It was inspiring to see how that power was created in a small moment. How every person there sacrificed waking up early to pick up any trash in the street for a better sanitized world and community. How each person looked out for one another. How there have been meetings and plans to make sure kids have free access to the internet and education. To see how nothing was taken for granted and everything was appreciated. Without having traveled to Colombia last semester, I would have not known how multifaceted and positive it was and would have believed that there was not much more to Colombia than the Cartel drug trade with Pablo Escobar. Colombia may have been damaged by the violence of the past, but through the hard work of the communities and many other factors, it has flourished. 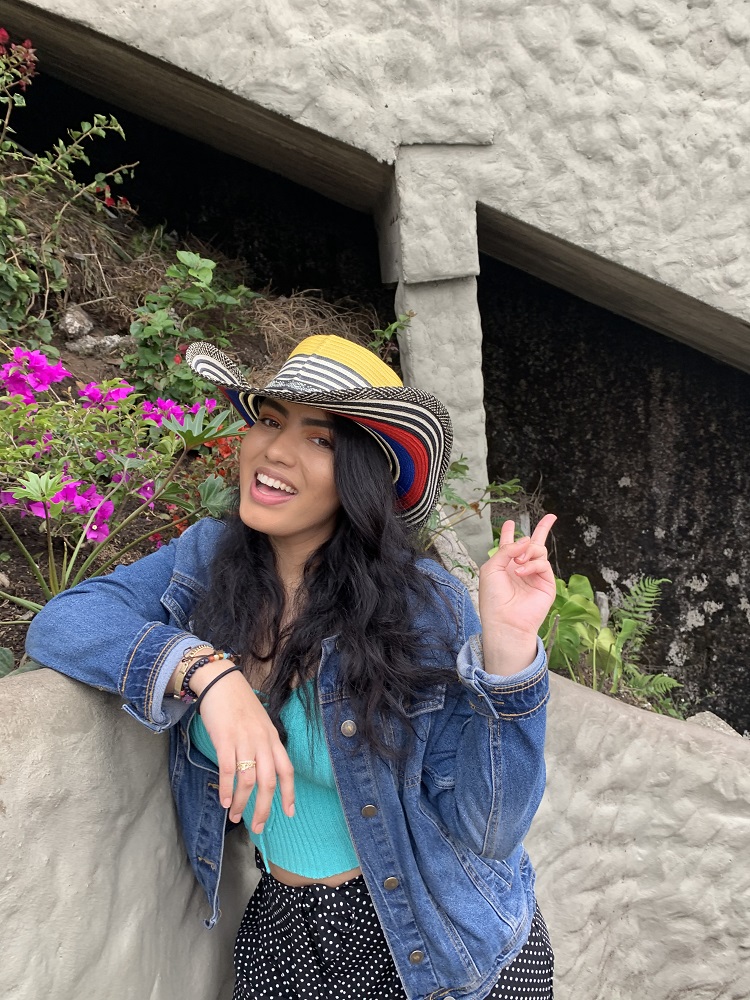 After I climbed El Peñol en Guatape, a giant rock hill in the department (state) of Antioquia. It’s over 650 feet tall 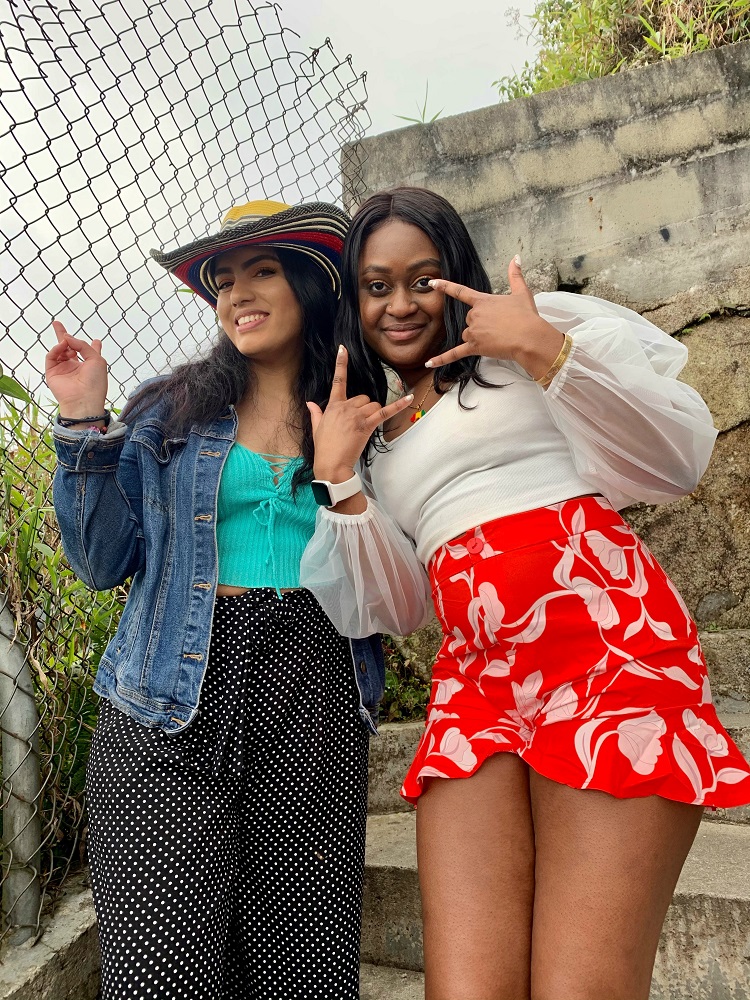 Enjoying the views and architecture of Guatape 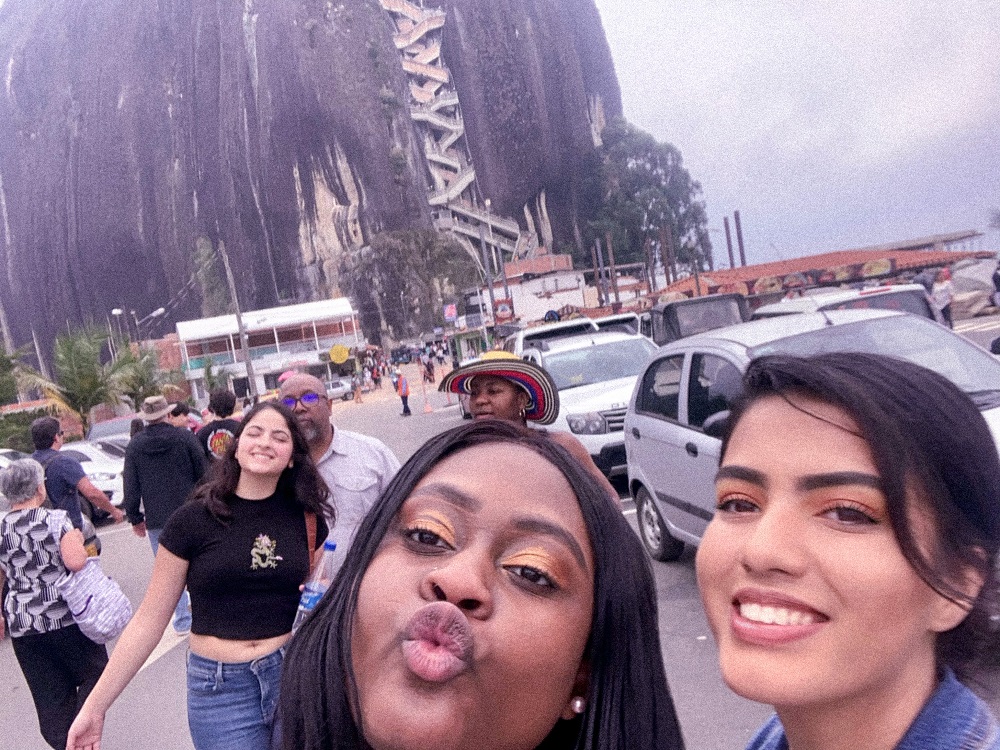 Dr. Lindsey, Sara, Sanasa, Grace, and I after climbing El peñol *which took about an hour or two*