Talia and Emma are senior interior design students who have been in the program together for the past 4 years. They had the exciting opportunity of going on a global classroom trip together to Barcelona to study historic preservation. The following blog post was a collaboration to describe a little bit about what made the trip so special to both of them, both visually and in writing.

Watch and read their blog and descriptions below

The countdown for spending spring break of 2019 in Barcelona began in the November of 2018, around 100 days out. Even though 100 days sounds like an unbearably long time to wait for something, it was sitting in Washington Dulles airport waiting to board our flight to take us over the Atlantic that felt like it lasted the longest of any of the other days that came before it. But eventually we boarded the plane and were up in the air.

To the south of Barcelona lies Tarragona, a medieval city that defines the Catalan region of Spain. To me, what set Tarragona apart from Girona was that it appears to be a new city that was shoved into the streets and alleyways of an ancient one. The city is filled with ancient Roman ruins, but also has a large “main street” that looks to be very 21st century as it is lined with boutiques and restaurants with apartment units above. I think it is this theme of incorporating the new into the old that makes the city so unique and makes the history more fun to learn and engage with.

To the north of Barcelona lies Girona, another medieval city that defines the Catalan region of Spain. Many of the public buildings in Girona had originally been built during the first century, but as each one came to an end it was common practice to rebuild the same thing (a cathedral on top of a cathedral) where the previous one had stood when the time came. I found this to be very interesting because centuries ago as these buildings were being rebuilt to fit community needs the city planners were probably unaware that they were doing a great service to the future community by preserving the layout of the original city.

The Palau de la Musica is a music and concert hall that was designed to be a place that would nurture the rebirth of Catalan artistry, and this can be seen through the symbolism that was incorporated into the design and ornamentation of the space. The design of the Paula de Musica included a lot of cultural symbolism as well. A majority of the colors used throughout the space, such as in the stained-glass windows, the carpet, the upholstery, and the decoration are hues of red, orange, and yellow and was done to represent the Catalan flag. In the center of the wall behind the stage is a large relief carving of a Catalan crest, located in the direction of the sight of every viewer. Seeing the use of Catalan cultural symbols in the ornamentation of the building was inspiring to me as I had never thought of using architecture and design as a means of supporting a nationalist movement. Today those living in the Catalan region of Spain are still fighting for independence from the Spanish government. I think having architecture that reflects these nationalist themes can only motivate the determination behind those fighting for political change.

What I found to be the most interesting aspect of touring the Gothic Quarter of Barcelona was that the construction of these gothic style buildings were not completed during the original gothic period that began in the early 12th century. The reasoning behind this decision was to give a city that had been broken, a sense of history through what appeared to be ancient architecture. I think the rebuilding of the neighborhood in this neo-gothic style was successful in many ways. First, the execution of the design was done so that the buildings truly appeared to be gothic. The stone used to build the structure referenced the masonry used by the original gothic designers and the ornamentation of the building blended into the structure as well. If I had not been told that these buildings were not built during the 12th century I never would have questioned it.

Getting to indulge ourselves in the artwork of Salvador Dali gave us the opportunity to skew our perspective on visual media. Visiting the museum dedicated to his artistic career allowed us to learn about the influence of Spanish culture in fine art and to step into the unique world Dali had created.

As soon as I first saw the Sagrada Familia I knew it was not like any other cathedral I had ever been in, and once I stepped inside and got to see and experience its’ interior I was even more assured in my belief that this church is a one of a kind. Aside from the religious themes of the Sagrada Familia, Gaudi represents the natural world through his intricately designed stained glass windows and in the curves of the walls, columns, arches, and ceiling. The stained-glass windows were designed to fill the cathedral with a lot of colored, natural light but specifically to cast the light towards the altar. On the side of the cathedral facing east the windows are primarily stained in cooler colors such as blues, greens with few reds and oranges. The opposite happens on the side of the cathedral facing west, where the glass is primarily stained with the warmer colors and only a few pieces are in cooler colors. The idea behind this was to have different moods reflected in the interior when the sun is rising and when the sun is setting, again giving visitors an extreme reference to nature while being inside. The walls, columns, arches, and ceilings are all shaped by curving planes that give them the organic appearance that Gaudi was so known for.

The days we spent traveling through Barcelona and the surrounding cities were such a blur. Everything happened so quickly, and the time felt like it was passing quicker than it normally does here in Arlington. The long flight home was the perfect opportunity to sit back and reflect on the past week. 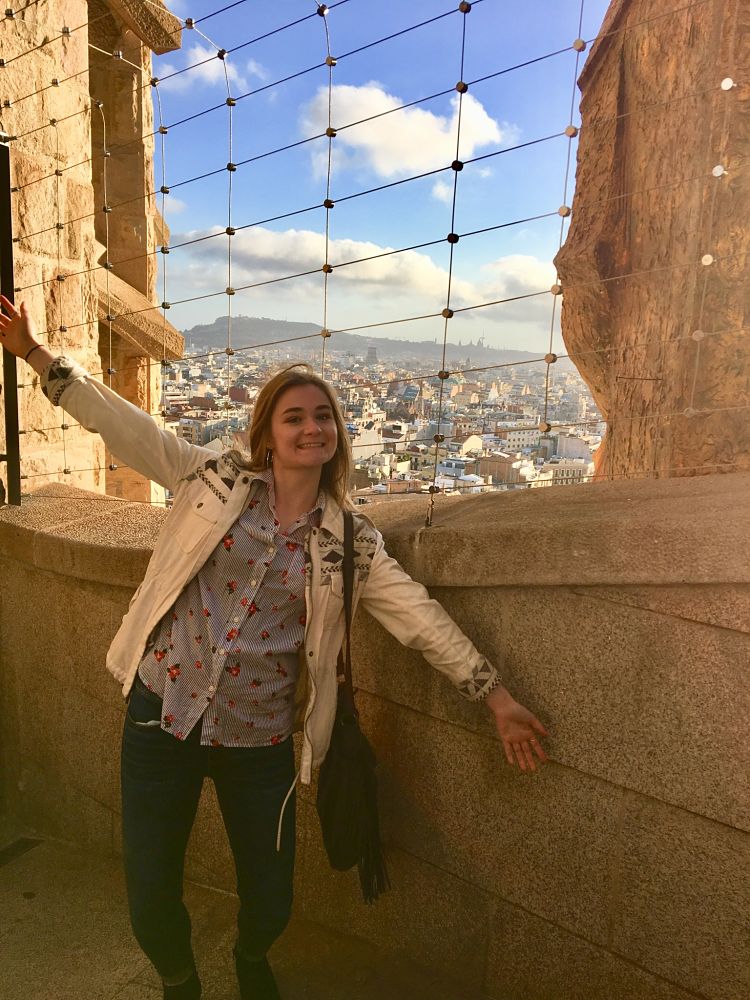 Emma Zombro on the program 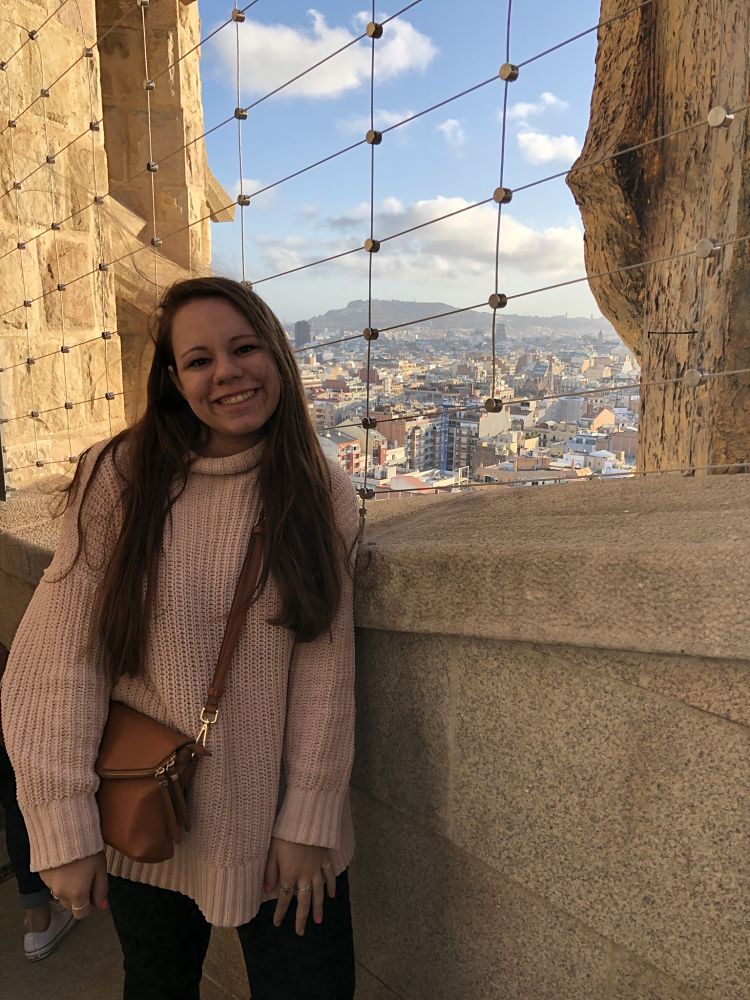 Talia Santiago on the program

Our historic preservation global classroom trip was an amazing experience. I never expected for one week to have such a huge impact on my life. I will forever be grateful for the amazing places and amazing people I encountered and have formed great relationships with. I truly feel so blessed to have had such an opportunity. Studying historic preservation gave us a unique opportunity to explore architecture and interiors that taught us so much about the history and character in Catalonia. Historic preservation allowed us to look from new perspectives at the built environment around us, giving us new ways to understand our field of architecture and design in the context of how it can teach us about the past.