My last journey through the diverse landscape of Peru was in a city called Iquitos. Iquitos is a city that is situated right on the intersection of the Amazon River and another smaller river leading up to the amazon. The streets of the city are filled with more motorbikes than cars; as they drive through the town, they ignore the lanes that are marked on the road. The humidity that hangs in the air is accompanied by warmth instead of the bone chilling coldness in Lima. We planned to spend the night in the city of Iquitos me and, the next day, to board a boat to arrive at our final destination, which was a resort on the edge of the jungle. 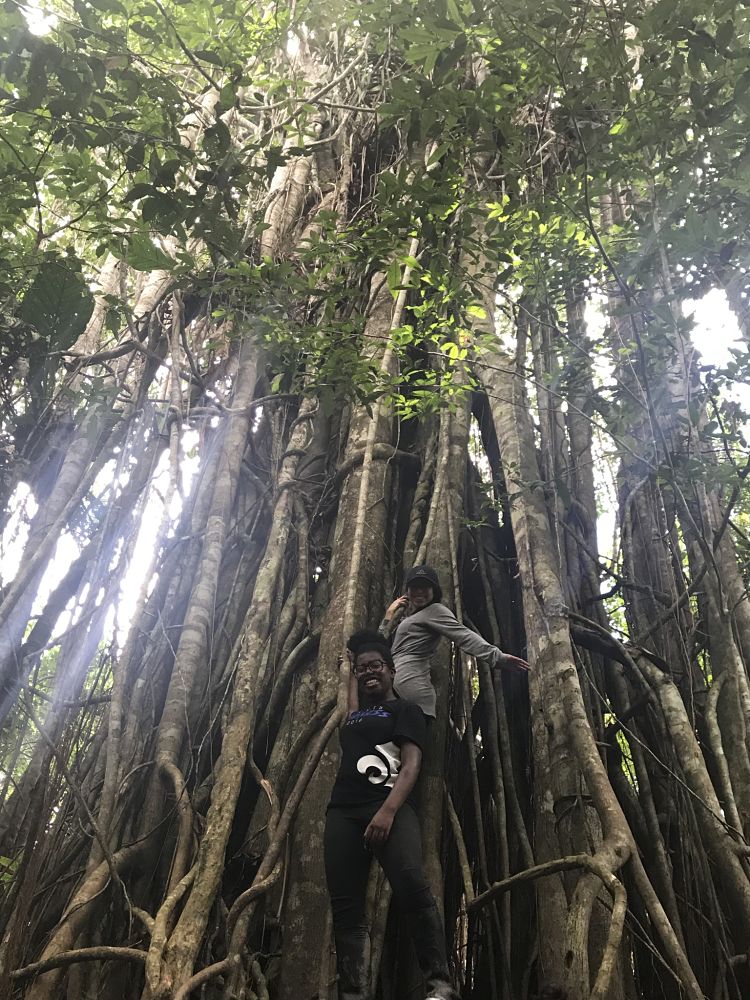 Climbing trees at the end of our walk through the jungle.

If you read any of my blog post from Costa Rica, you know how much I absolutely love the jungle. There were significant differences in the way the jungle was in Peru than in Costa Rica. Costa Rica felt lighter, almost like you could feel the trees giving you oxygen (okay maybe I am being dramatic). In Peru, the jungle has hot and thick. To be fair, the areas I visited in Costa Rica were a tad more geared towards tourists than the trip I went on in Peru.

The walk through the jungle I went on in Iquitos was less of a paved pathway and our guide carried a machete, which he used to cut down a small fallen tree in our path. He also showed us how to use termites as a natural mosquito repellent. Surprisingly, when he squished up the termites the smell was so similar to the smell of store bought mosquito repellent, that I was almost convinced to use the squashed bugs. Almost. The one adventurous thing I did do was drink water straight from the vine. The water was so sweet and refreshing, especially after sweating in the humid jungle climate.  With these two skills, I am pretty sure I will be able to last a season or two on the show survivor. 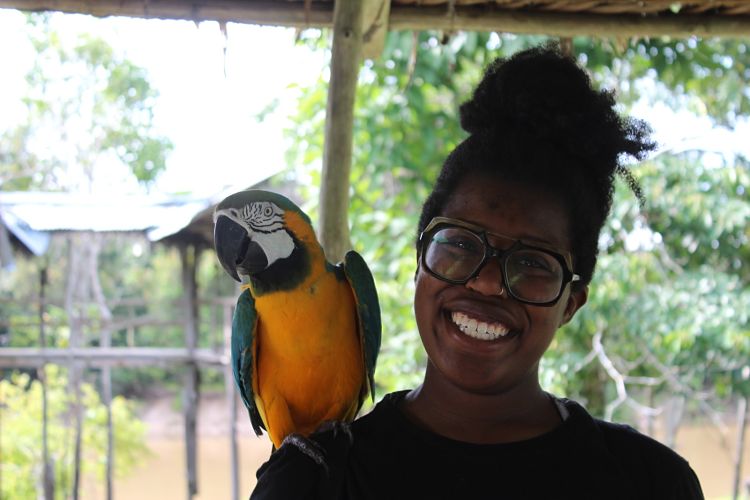 I am pretty sure this parrot did not want to be near any humans. As this picture was taken he definitely dug his nails into my shoulder.

The calmer activities that we planned included visiting rescue centers.  First, we went to visit an animal rescue center in town. This would be one of two rescue centers I would visit during my whole trip. These would also be the only animals I would see during my time in the jungle. I had conflicting feelings about the two rescue centers we visited. As we walked around the first rescue center, you could see the animals pacing back and forth in the cages. It was such a frustrating feeling to see an animal native to the jungle be right in front of its natural habitat but held back by a wood and wire. For some animals it was much more than a cage holding the animal back from being free. For example, there were these beautiful macaws/parrots in the middle of the first rescue center. The guide was telling us that the birds were rescued from individuals who were selling their feathers. The previous owners would pluck the feathers off the birds and sell them on the black market. Recently, the birds were able to grow a majority of their feathers back but were still unable to fly. Call me crazy, but I could almost see the sadness in the bird just sitting land bound. 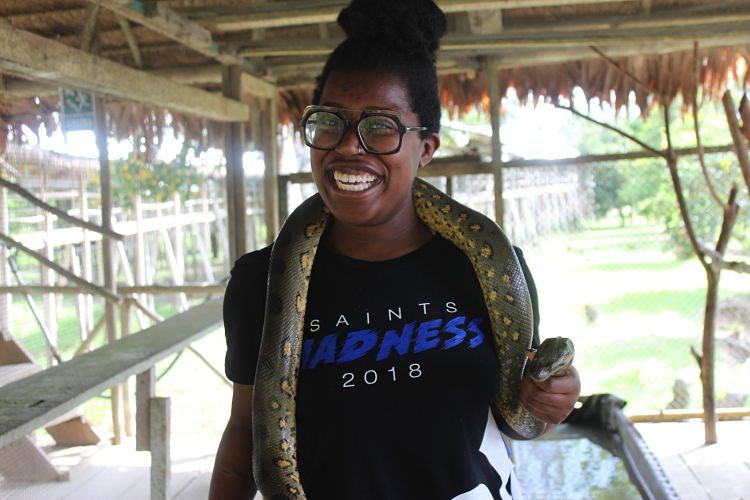 I really thought I would like holding this snake, but once it was on my neck I started freaking out. No me gusta.

On a happier note, the first rescue center did explain to us that a good portion of the animals they treat are released into the wild. One of the most incredibly moments I had at this rescue center was watching baby manatees. The center had three or four manatees in a pool with a bunch a vegetation for them to eat. It was so awesome watching their little noses and mouths come up for air and search for flowers to eat. I could have watched them all day; they were so incredibly peaceful. The second rescue center that we visited was a little more questionable. The first concerning aspect of the experience was the fact that we were able to hold the animals. While I was at the center, this thought crossed my mind, but of course, I was so excited to hold a baby sloth that I decided to be complacent in this problematic behavior. I know: I had a moment of weakness. I was a little comforted at the fact that tour guide told us that the animals we were holding were all domesticated and probably not able to go into the wild, but I could definitely tell that the animals did not want to be held by tourists. I could tell the animals definitely did not like the man that was handling them; the bird we were holding almost bit the man’s fingers.

To say the least, it was definitely a wild and interesting experience. We finished up the trip by traveling to the Amazon River to watch for the pink dolphins. The locals in the jungle are actually scared of the pink dolphins because legend has it that the pink dolphins turn into humans and trick people into drowning in the river. Legends aside, watching the dolphins in their natural habitat was so beautiful and enchanting. We were able to spot two or three come up for air around our boat on our way back to the city. 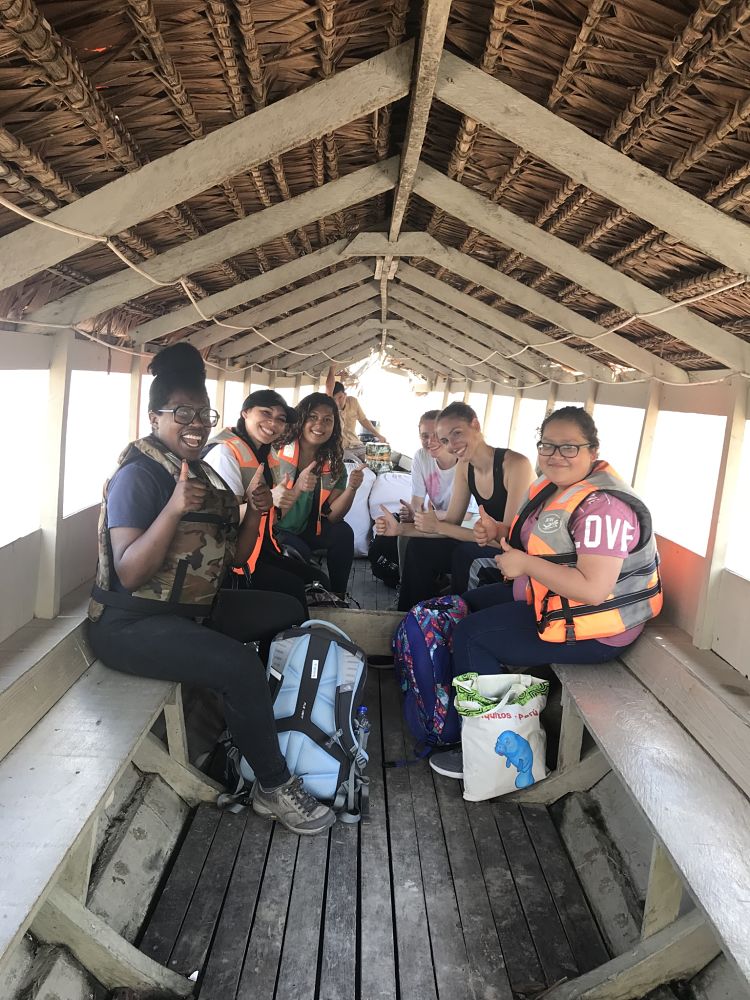 On our way to the resort for the first time.

It was the most wonderful goodbye to the jungle I could have ever imagined. My trip to the jungle, to the mountains, and to the desert of Peru has made me fall in love with nature and the diversity of the landscape of this country. I wish I had more time to spend here to revisit all of the places and immerse myself for months on end in every type of landscape. I will definitely be dreaming about the beautiful warmth of the jungle