Walking down the streets of Cusco me and my friends were shocked to see rainbow flags flying everywhere. On every corner and in front of every business there was a flag flying, including in the main square at the center of town. We thought we finally had found the holy grail of LGBTQ+ inclusivity. 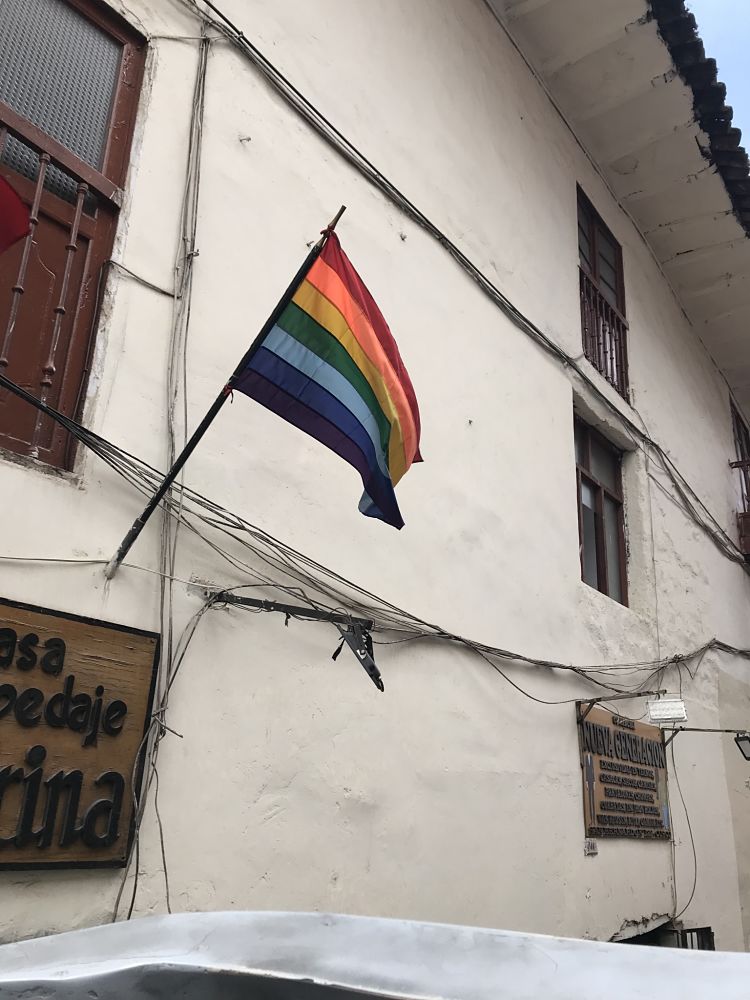 We were soon corrected when we went to buy a llama keychain with the multicolor flag and the saleswoman told us it was the Cuscanian flag, which is completely different from the pride flag. A wave of disappointment fell over our faces, and we quickly walked away feeling both disappointment and ignorant. It would have been some solace knowing there was a Pride heaven in the middle of the mostly catholic society, and due to the current events happening back in the states. Currently, In the United States there have been multiple cases are being presented to the Supreme Court in regards to LGBTQ+ rights, which has resurfaced conversations about LGBTQ+ rights. 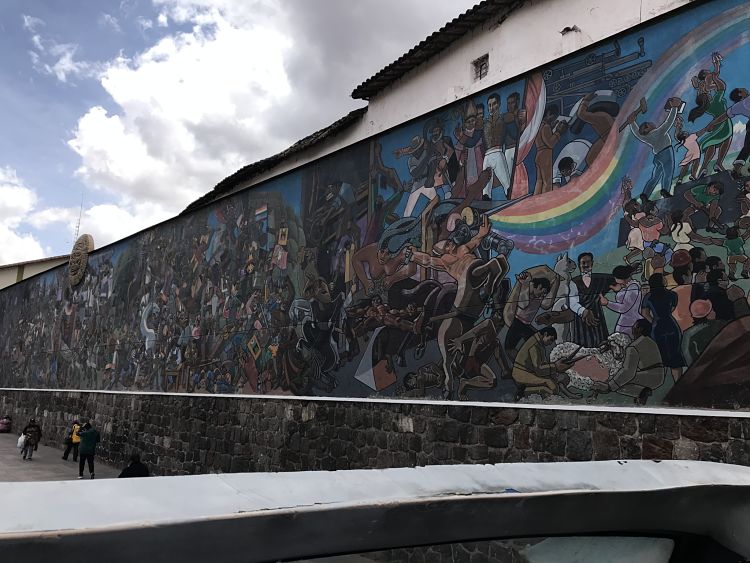 A mural containing the Cusco flag!

When traveling abroad sometimes you are under the assumption that you will be traveling to a country that will be your safe haven. There is a belief that some study abroad kids hold on to that we will find a country that has it all figured out, one country where we feel like we belong more than we do in our home country. For a brief moment I had that feeling in Cusco; it was especially relieving because in Lima I have felt the need to hide this part of my identity.

That feeling of comfort quickly went away. I soon began to reflect on something that I heard while interning at the Peace Corps this summer: “volunteers are sometimes advised to stay ‘in the closet’ while traveling to particular countries.”  Hearing this was appalling to me, especially since volunteers serve in another country for two years. Two years of hiding a part of yourself. Before I came to Peru I thought having to keep part of my identity a secret for 4 months, and that seemed like an eternity. While in Peru there is minimal danger in disclosing this part of your identity, it is not welcomed with opened arms. For me it is like being stuck between a rock and a hard place. 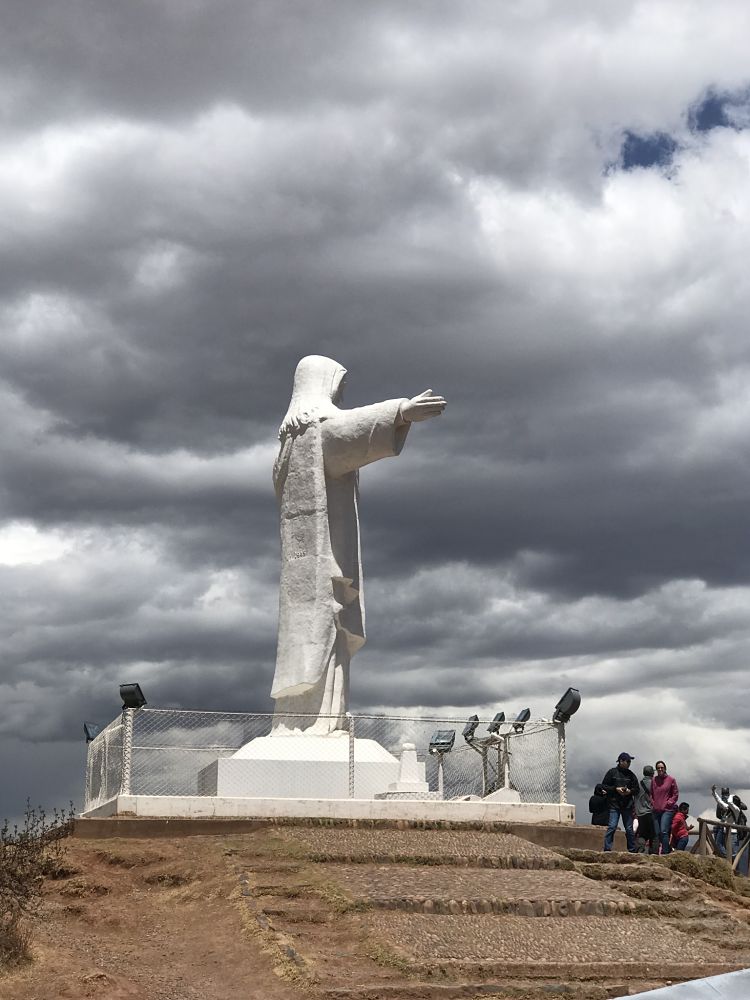 Representation of the catholic influence. A big statue of jesus is overlooking the city of Cusco.

In my own country there are frequently debates about whether or not the LGBTQ+ community should be treated the same as everyone else, as if we are not people. In the other half of the Americas, there is minimal acceptance of the community. While I have been in Peru there have been heartbreaking moments, like when my Peruvian friend told me she has been physically assaulted for being gay. There have been really weird moments, like when a guy tried to have a full conversation with me about how deal with his sister being gay in the middle of club. There have been more encouraging moments like walking down the street of a neighboring district called Barranco and seeing same sex couples holding hands. It is difficult to sit with the reality that due to one aspect of your identity people choose to treat you differently or not see you as a human, but it is relieving when there are moments of acceptance. 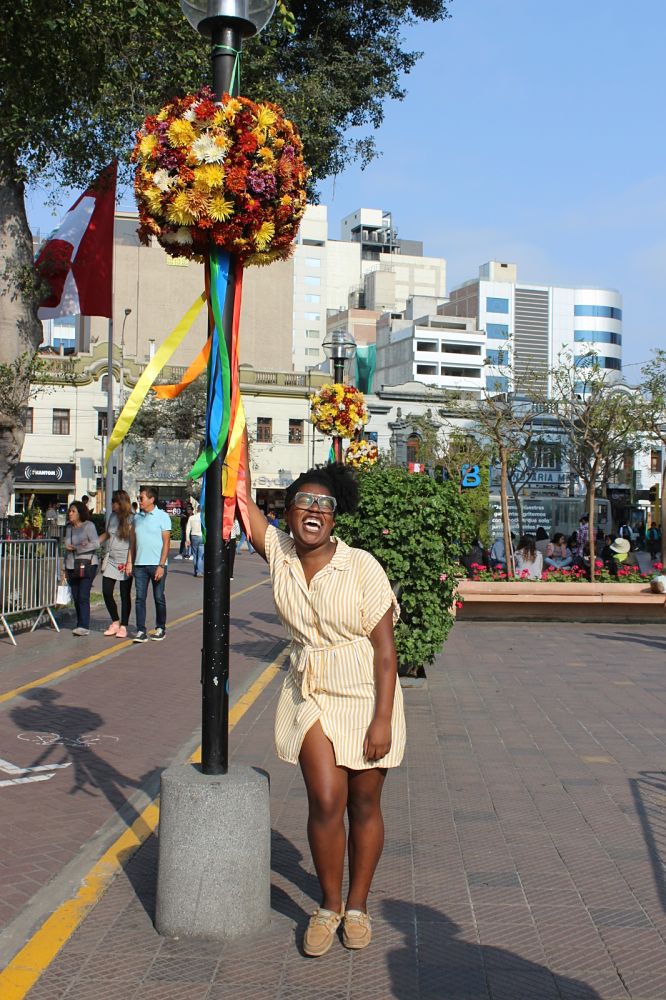 While I do not have all the answers of how to handle these difficult moments or harsh realities, I do know there are pockets of hope. For example, in my social inequalities class my group is working on a project that addresses what it is like to be part of the LGBTQ+ community in Peru. In working on the beginning stages of our project we found an organization in Peru that helps those youth that are part of the LGBTQ+ community. It is important to find little pockets of acceptances and moments of affirmation for all parts of your identity, even if it means in doing so misidentifying a flag.