To be completely honest, before coming to Peru, I did not know the Panamerican games existed.  I don’t think I would have even known what the Panamericans were if they were not hosted in Peru this year. All around the streets of Jesus Maria, I would see banners with the hashtag #jugamostodos and have no idea what the sign meant. Our program coordinator finally explained what the games were, and every meeting she would mention the games and how cheap the tickets were.

Due to the constant pressuring and signs, I felt that if I did not go to the games it would be a missed opportunity, but in the end, I put no effort into searching for tickets. I waited too late to purchase tickets for all the main events and was stuck watching the closing ceremony on TV at home. (If you are ever bored one day I would recommend searching the closing ceremony on YouTube because it was incredibly hype!). I reminded myself that I don’t even like sports and pushed it out of my head, until a week later when someone mentioned the Para-Panamerican games were starting. Again, I was not quite sure what the Para-Panamericanos were. I came to find out the Para-Panamerican games are specifically for athletes with physical disabilities. Once I realized that games were continuing, I knew I could not pass up the opportunity again, even if I hated sports. As my friends and I were looking for tickets to attend a game for the upcoming weekend, we noticed many of the games were sold out. There was only one game that had enough seats for us: Goalball. I had no idea what Goalball was, but it ended up being one of the coolest experiences I have had so far in Peru. 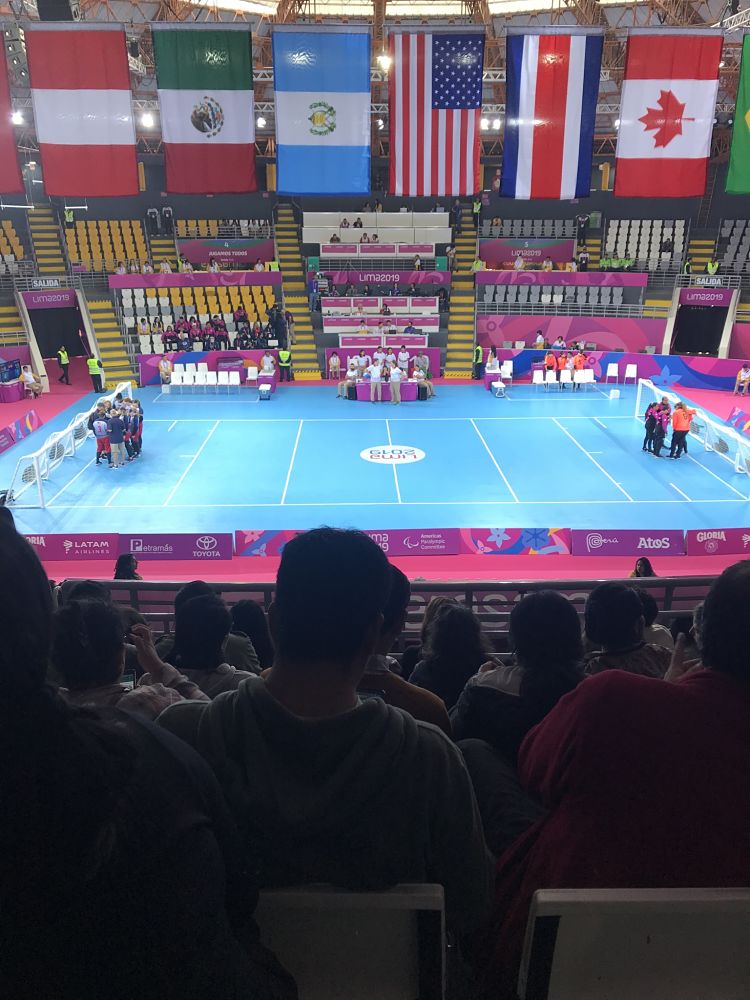 The US vs. Mexican teams getting started

Goalball is a sport specifically for individuals who are blind or visually impaired. The best way I can describe it is a cross between soccer and dodgeball. There are three players on each side of the court guarding a large goal. The team that has the ball rolls it across the court to try score it into the goal. The other team protects the goal with their bodies and tries to stop it from entering. Players wear protective goggles over their eyes which are completely black. Inside the ball are beads that help the player know where the ball is when it is rolled around the court. In order to make it easier to hear where the ball was, everyone in the audience had to be quiet. The most interesting part of this event for me was the fact that every single person in the stadium was completely silent. Everyone respected the players and the sport enough not to be disruptive. The only time the noise got a little too loud is when the ball was incredibly close to entering the goal and the audience would either cheer in excitement or anxiety. 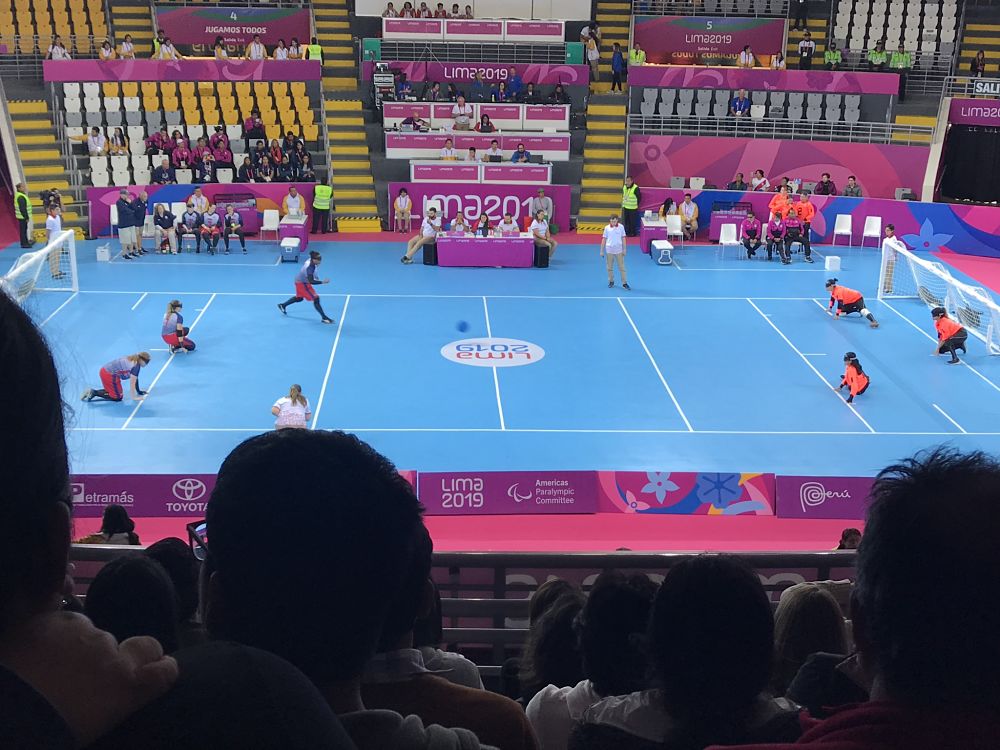 The US and Mexican teams in action!

This is the only sport I have fully enjoyed watching because of the difference of the energy in the stadium. There was a calm excitement in the stands that was not too overwhelming, which contradicted my opinion that people got too excited over sports. All the basketball games I have attended were too noisy and packed with bodies. Goalball was the only experience I have had that did not exhaust me after leaving. Instead, I had such admiration for the amount of training and dedication the player put into the sport; it is absolutely amazing to me what our bodies can do when we push ourselves. 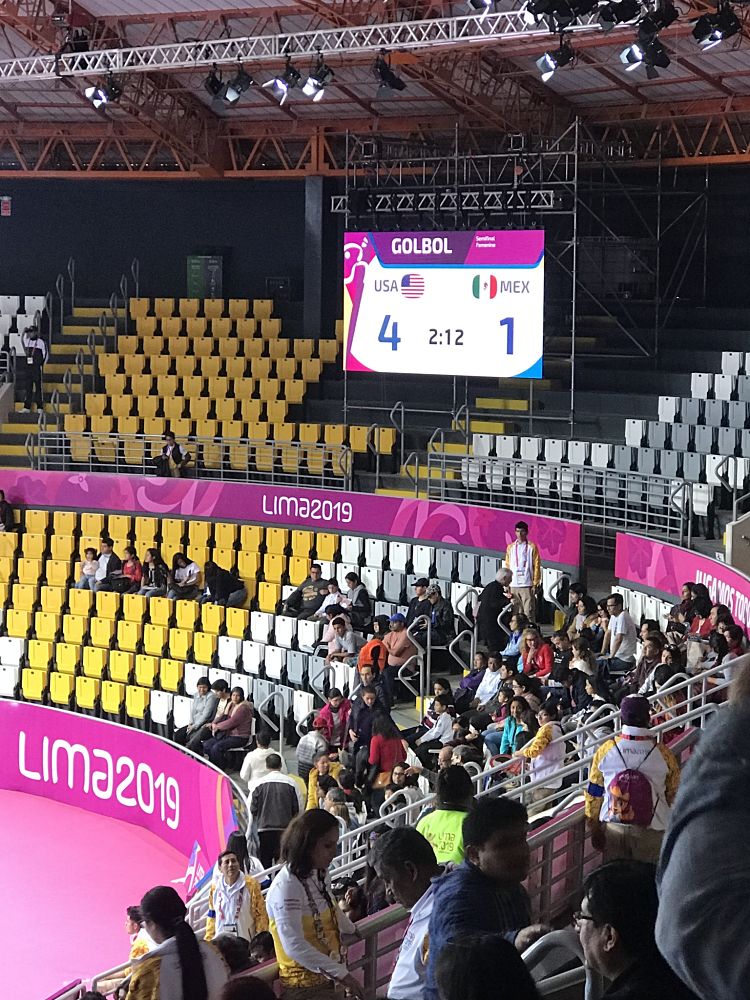 The last match we watched was between Canada and Brazil, and when Canada lost, I watched one of the player break down and cry in the middle of the court. This showed me how much athletes put into each practice and each game. Athletes dedicated their lives to their sport. After leaving this sport, I am able to say I appreciate all sports, but especially athletes that compete with physical disabilities. Next year, I will be sure to pay attention to the Para-Panamerican games and find at least one sport I keep up with, because in the end what would sports be without the fans.