My decision to study abroad was mainly influenced by my desire to learn a language. The reason that I have only studied abroad in Latin American/Spanish speaking countries is because I believe in order to have a truly authentic experience one must know the language or have an idea of the language, but that is a topic for another blog post. My strong feelings about language learning pushed me to have a learning experience outside the classroom. I felt in the US learning a language was such a sterile process. I would sit in the classroom and listen to a professor speak only in Spanish to me, and maybe I would decide to speak back to her in Spanish, but it wasn’t a requirement. In order to pass, I would study some vocabulary for a quiz that week and cram for the exams like I did all my other classes. Once I walked outside of the door of the classroom, rarely were my skills put into practice or challenged. I am fortunate enough to have met some friends at Marymount who speak both Spanish and English, but rarely would I speak to them in Spanish because of my fear of getting something wrong or my limited skills in communicating what I wanted to say in Spanish. I would not take advantage of opportunities to practice outside of the classroom, which is what I told myself I wanted. My fear stopped me from pushing myself to learn in both traditional and relaxed settings. When beginning to truly assess my skills and thinking about how far I wanted to go with Spanish I knew the only way I would learn was to push myself way outside of my comfort zone and put myself in a position that forced me to demonstrate practical application of what I had learned over the years. I had to put myself in a situation where I had no other choice but to speak Spanish. 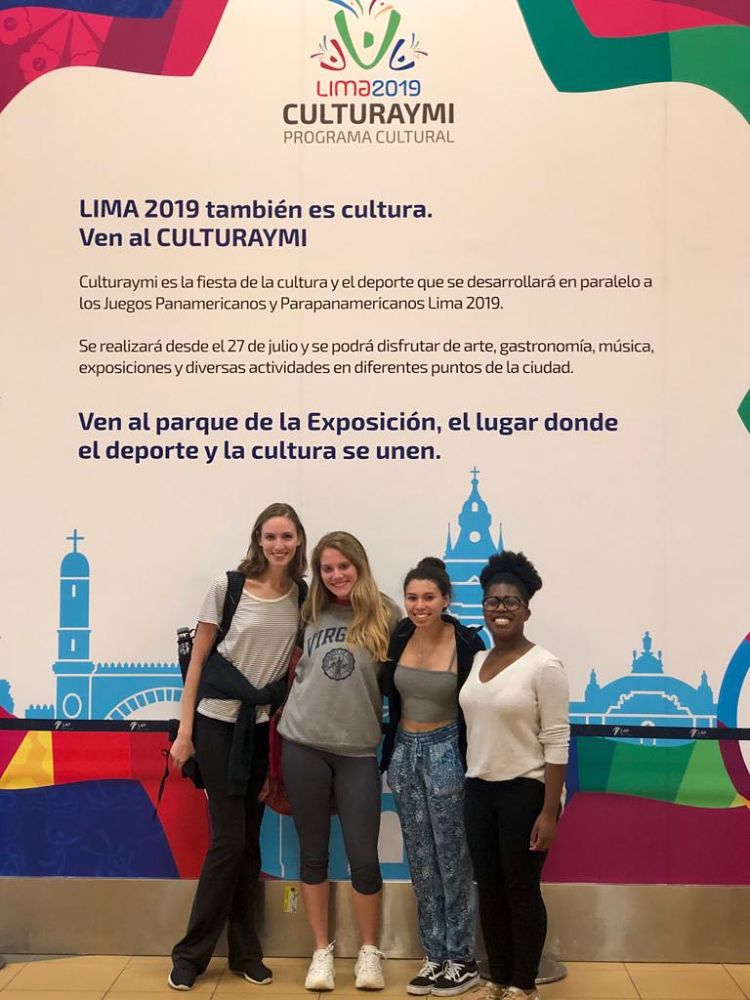 Me and the lovely ladies from my ISA program arriving late at night in Lima. (minus two people)

By studying abroad in Lima, Peru, I have been constantly asked to apply my knowledge of Spanish in everyday situation. If I want to try local food, of course I have to speak in the local language. If I want to buy something or ask for a specific product at the store, I have to ask in Spanish. I know it sounds like a very elementary concept, but I think before a lot of students go abroad, they are not cognoscente of the fact that there may not be English speakers in country. I think, being American, we take for granted our powerful position in the world and automatically think that English is spoken globally. Here in Lima, there may be a few occasions where you’ll meet a Peruvian who speaks English, and even then, they rather speak in Spanish because that is their first language. Choosing to study in Lima has so far pushed me out of comfort zone, but while I think I may made a few steps in the right direction, I think I still have a marathon to run. 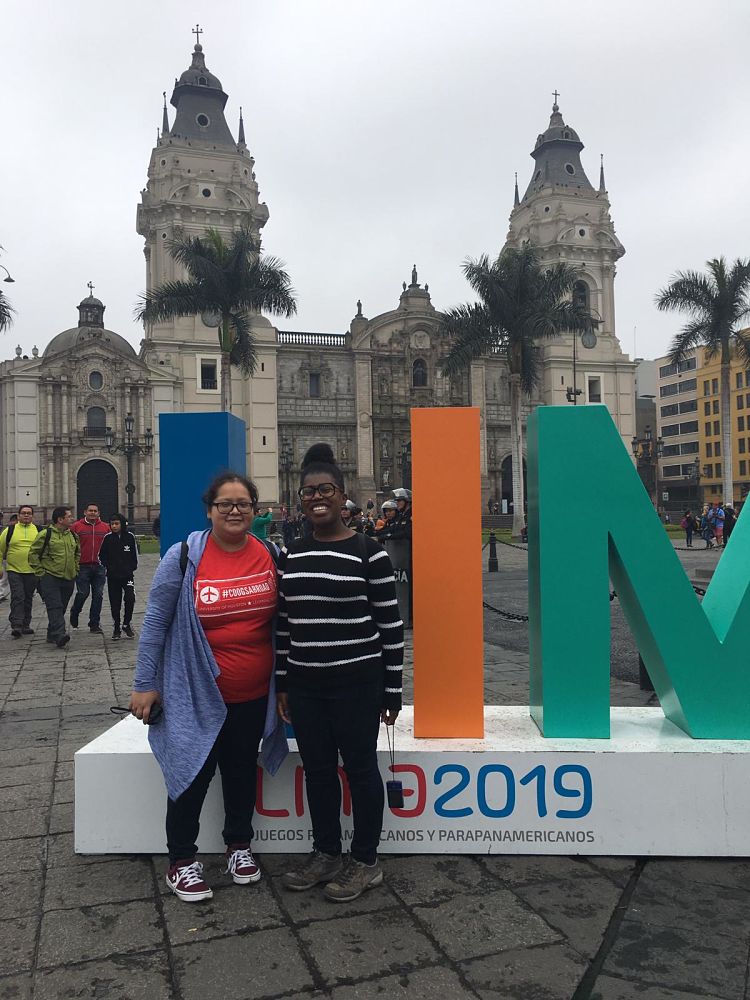 Photos with my roommate in Downtown Lima. 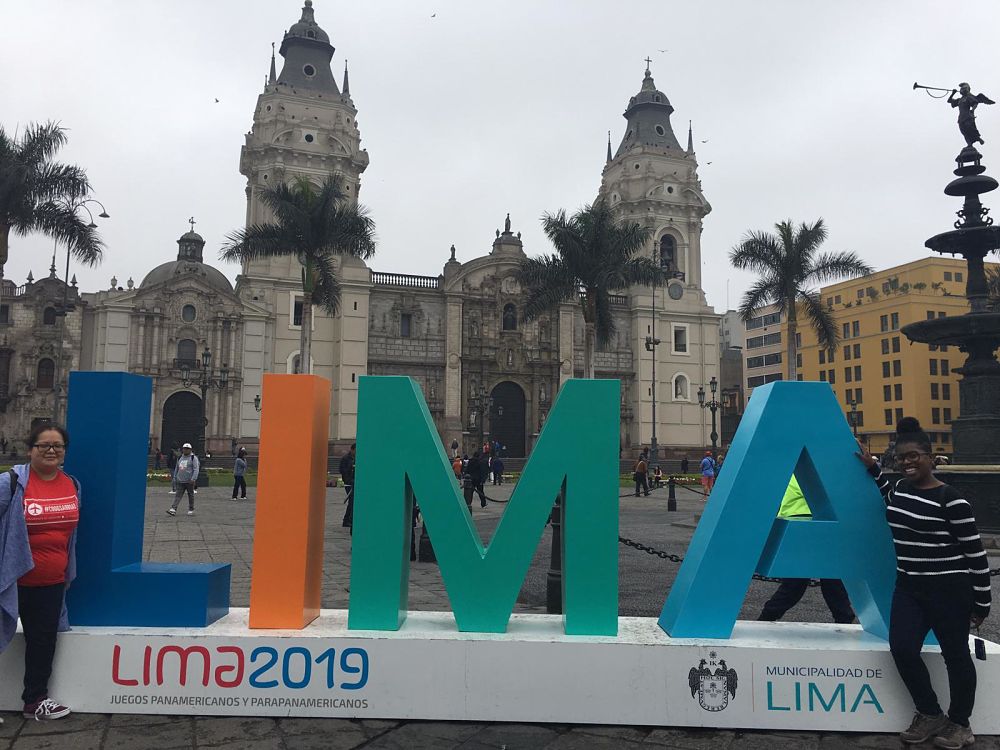 We had to take lots of pictures in from of the Lima sign.

Do not get me wrong, I am incredibly grateful for those years learning Spanish in the US because all those years of sitting in a classroom and listening to someone speak to me in Spanish, along with watching a Netflix shows in Spanish (Money Heist/La Casa de Papel is amazing please watch), and traveling to two other Spanish speaking countries, I believe I have strong listening and comprehension skills. I do not want to overestimate my abilities, so let’s just say if someone is speaking to me in Spanish I will understand about 75% of what they are saying, and 15% percent I can fake with context clues and the last 10% I am lost. I believe comprehension will definitely come with time. The real struggle is being able to respond back in Spanish. There is a huge difference between being able to recognize the words that someone is saying as opposed to producing those words yourself. Along with producing, you must conjugate correctly, pronounce correctly, and have correct sentence structure otherwise what you’re saying may not come across correctly. It becomes easier to say the basic sayings in Spanish that everyone understands such as “sí” or “no sé” rather than having a real conversation. For me, whenever someone spoke to me in Spanish, it felt like a final exam worth 50% of my grade, and simply responding by saying “sí” was passing and it was a relief. In the United States, any Spanish speaker would almost treat it like a test. The conversation would go “Oh you speak Spanish?” *Says something in Spanish* “Did you understand what I said?” These interactions with, of course, the constant Spanish exams my brain treated Spanish as another subject that I needed to get an A in. In Lima, that view is definitely changing. I am not having as much of a mental block due to fear and Spanish is not just a subject, but a living breathing language. 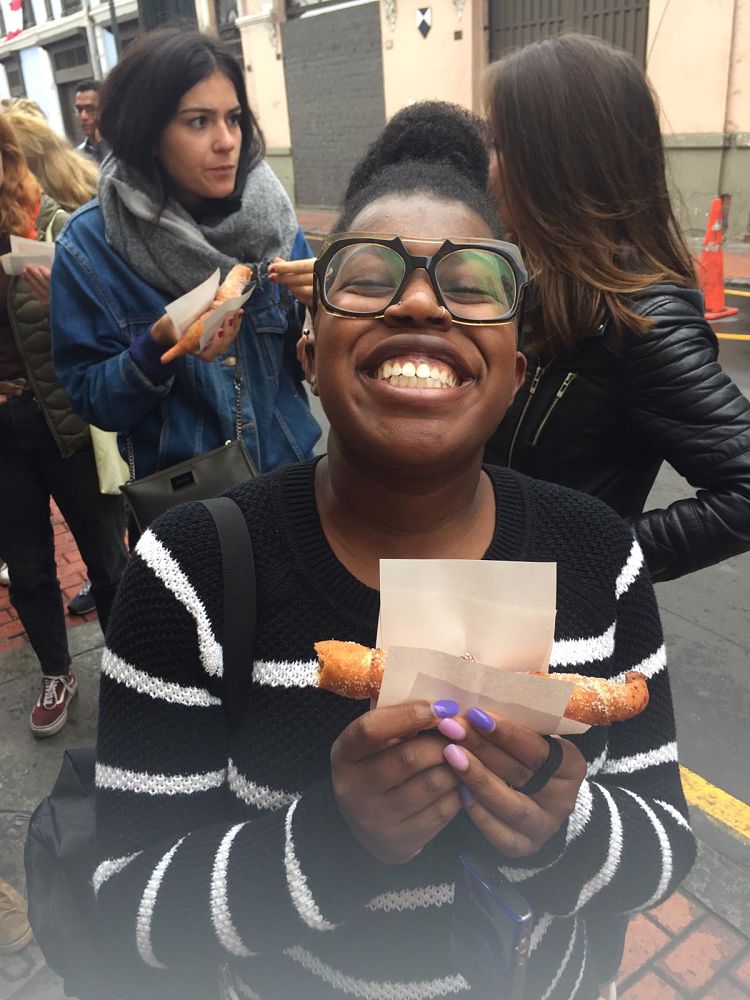 I was incredibly happy with this fresh churro in downtown Lima.

Now that I am in-country, I am beginning to view being bilingual as part of my identity. I view my host family’s home as my home, and, in my home, we speak Spanish. Outside of my home, I am beginning to accept that it is not a given that most people speak English and I am starting to accept the weird looks I get when walking down the street speaking English to my other American friends. I love the beautiful sound of Spanish and the familiar sound of English that tend to be mixed together in one conversation. Although, it still makes my head spin sometimes, I think the important part of learning of language is taking ownership of the language and beginning to claim it as a part of you, otherwise you begin to think of language as this academic hurtle as opposed to a form of connection to a different cultural and different ideologies.