Hi again! Luckily enough for myself, I recently got to go on the marine biology trip with Dr. Rimkus and, not to be dramatic but, it was one of my favorite trips I have taken.

If you want to be immersed in a foreign culture, this is definitely the program for you. Dr. Rimkus worked closed with Ms. Nancy, both the owner of a small hotel we stayed in and on the board for his organization, Hawksbill Hope, that works both on tagging, tracking, and protecting the Hawksbill sea turtles of Gales Point, Belize, and aims to raise money for scholarships for the local children to enter high school. Anyways, Ms. Nancy made most of our itinerary around the both the best and more culturally immersive activities in Belize. We were able to go snorkeling, go manatee watching, go tubing through caves, walk through a savannah, and jungles, find the first green turtle tagged in Belize (big shout out to Rimkus’s favorite class), and so much more while we were there. 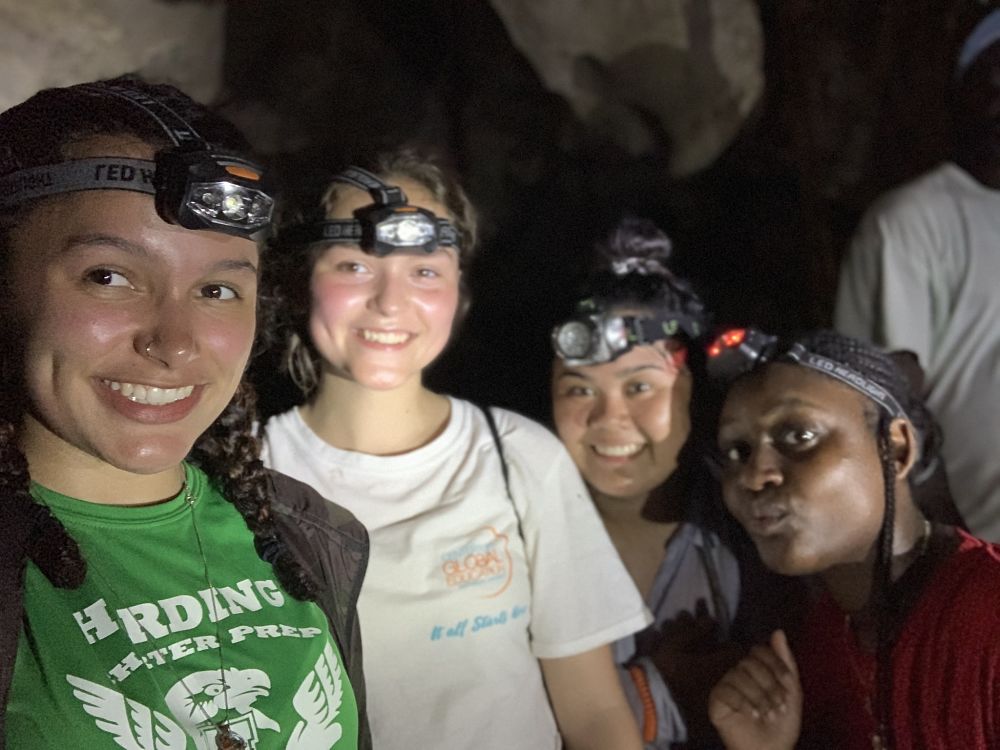 Friends and I in a cave past the jungles of Belize.

With all of these in mind, even back at the hotel we were experiencing Belizean culture as well. Gales Point is a small, fairly remote Kreol village along the coast of Belize. Here, we were able to interact with a lot of different people and to see how they live. A few of us got our hair traditionally braided by the women that worked in the kitchen. They taught us how to make baskets out of the scariest jungle vine I’ve personally seen (think rose vines times a million) and we learned how to make traditional meals, all from different villagers living 5 minutes walking distance from each other. Later in the trip, we were able to do little interviews with the kids in the village, and let me tell you, they are just as vibrant as their parents we met.

On the last day there, we all did a samba party, essentially just a get together of all of us and most of the people we met from the village. The kids were very intrigued and willing to talk and interact with us once they were more comfortable. We all started dancing dancehall and punta (a personal favorite) together and singing. A couple of the villagers were even teaching us how to play the drums. Something I definitely noted while there is that the more I interacted and put myself into the culture, the more I got out of it. I, being human, got tired a couple of the days there and would sit out on the activities or at least be less interactive. I noticed there was a direct correlation to my effort that I put in and what I had gotten out of it. Don’t expect to have fun there; make the fun while you’re there! 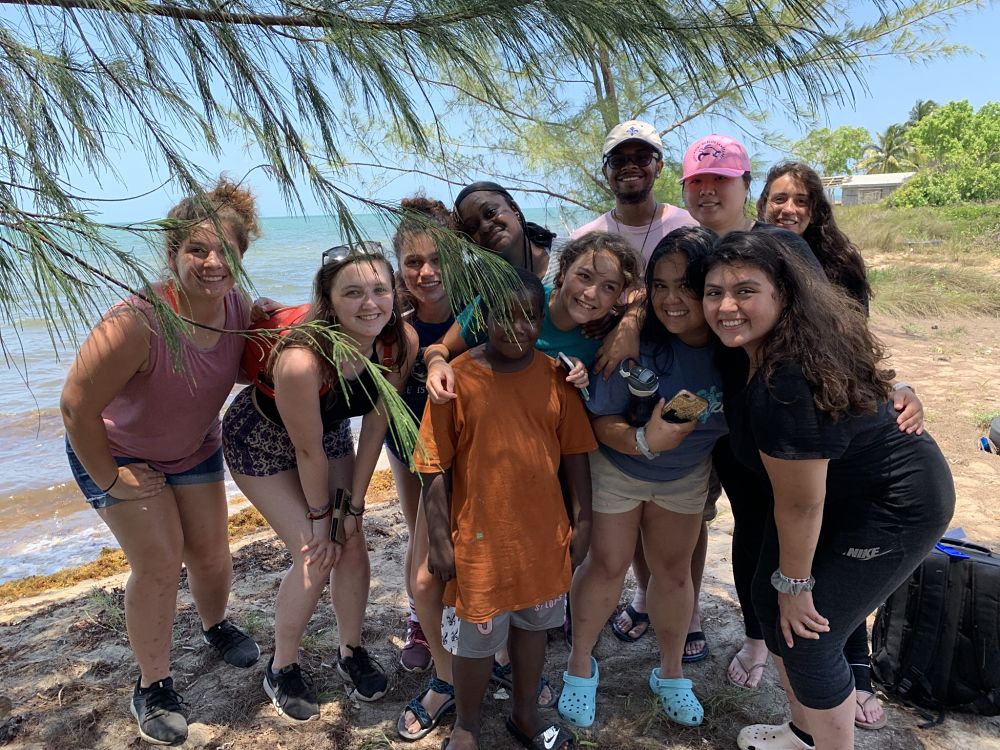 Some classmates and I with one of the local village children, Kelvin.

I actually found this experience specifically interesting for me, because of the great diversity I saw in my classmates who went with me. With both our diversity as a group and the diversity of cultures we saw in Belize, it was interesting to compare and contrast one another. Belize is different in that it is much more diverse than other Latin American countries. There were Kreol communities, Garifuna communities, Mayan communities, and just Belizean communities. With this in mind, both myself and another classmate of mine were both Central American as well so we had an interesting outlook on the situation, being able to see what was familiar to our own cultures and what differed. There were also several students that had close roots to Africa and it was interesting to see how that same African culture held up in the Kreol and Garifuna communities, two groups of people that had migrated from Africa centuries ago. And finally, Belize was actually colonized by the British and so there is much less of a Spanish influence there. Because of this then, everything was in English and the Queen of England is even on Belizean money. This was very different than my travels to other Latin American countries where the only European influence there was from Spain.

On one of the last days in Belize, we went to some Mayan ruins and I got talking to the tour guide about the differences he saw as a Mayan to that of the rest of Belize, or even Central America in general, as the Guatemalan border was within walking distance of where we were. He explained many differences in how he grew up to how others in Belize did and it made me realize that many of the similarities my friend and I had both noticed, such as the food that we ate (all deliciously homemade by the cooks I may add), were of Mayan culture, not Spanish ones. This made me reflect on myself, on how well I know my own culture. My family had much more ancient Mayan cultural influences than I had previously known about. This also made me think on how exactly does older, Columbus-time colonization affect us today. The sad truth that many people forget about is that Indigenous people across the world all had their own ways of living before Columbus and, due to colonization and its violence, many of them are either non-existant or close to it. Keeping close to one’s own culture is important to be able to understand yourself and where your family came from, not where your colonizer came from. 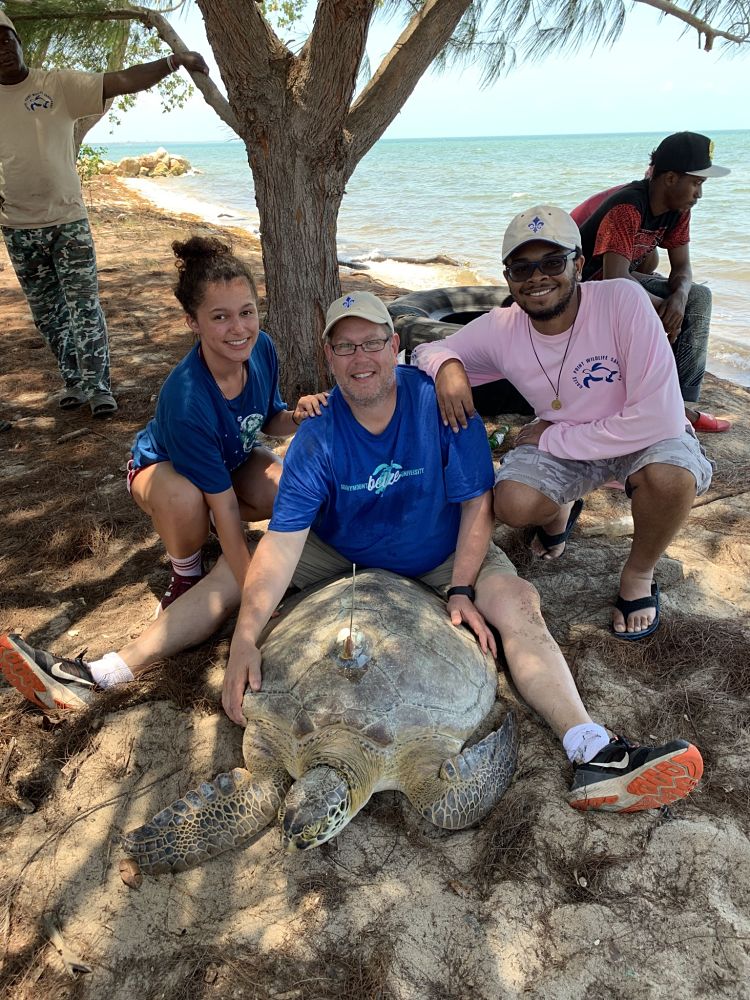 Dr. Rimkus, Darius, and I with the newly found and tagged green turtle, Time

On this similar topic of influences, the culture was multifaceted. Something I found interesting was the Kreol language itself. Everyone spoke English in Belize so language wasn’t a specific struggle for us but Kreol was a cool aspect of my experience there. Kreol is a mixture of their ancestral African languages and English. Because of this, when Belizeans speak, you will be able to hear familiar sounds and words and you may even feel like you almost understand, but trust me, you don’t. Both the cooks and the children we met were teaching us small words and phrases from the Kreol language and, once its explained, it feels like a big ah-ha moment that you never would have gotten before. Having family down in Louisiana, I’m fairly accustomed to American Creol, which is very different from its French influences. Always keeping this in mind while there was interesting as I was able to see how Creol and Kreol differ from each other. 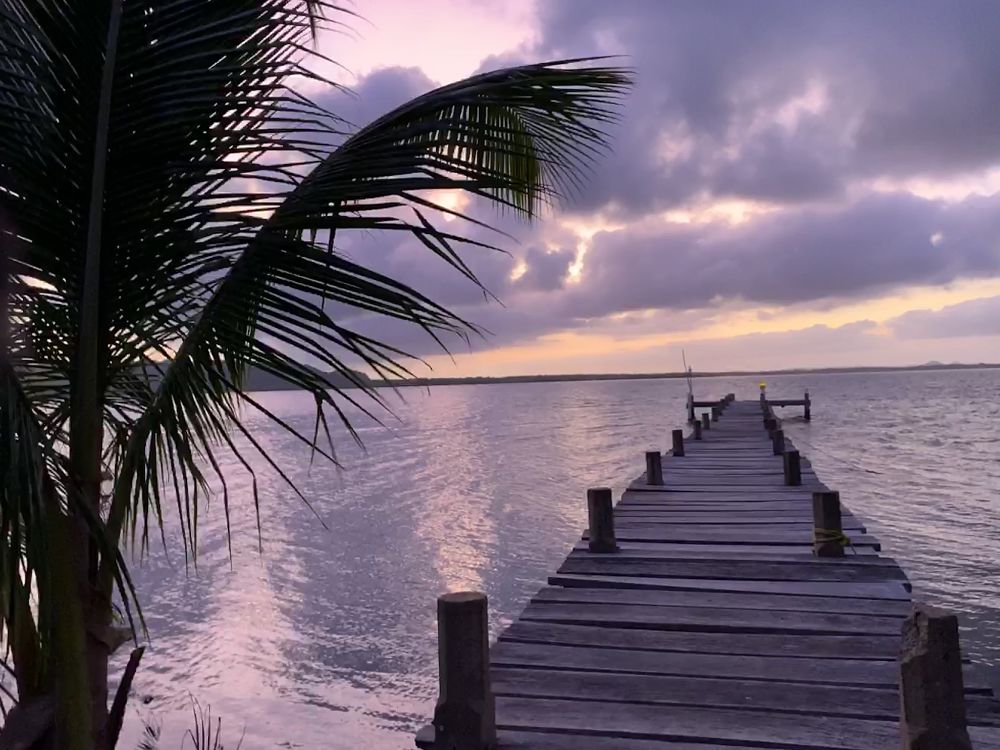 A beautiful sunset over the Gales Point lagoon.

I find all this kind of funny and ironic because choosing this study abroad was an extremely last minute decision for me. Frankly, I just needed my natural science credit and I figured, “why not do it in Belize; that seems cool.” I did not know anyone going in. I had no idea what the day to day was going to look like, and apparently I didn’t even know what airport to show up to (I had to learn the hard way to re-read ticket and know the difference between DCA and IAD). Despite all this, I met some of my favorite people at Marymount so far, had new, amazing experiences every single day, even ate homemade Belizean food for every meal, all in one of the most beautiful places I’ve been to. Like I said, this was one of my favorite trips I’ve taken in my short 19 years on Earth so far. As a psych major and sociology minor, I loved being immersed in a culture and country so different than any I had seen before. As someone who loves animals and nature, just the views alone were worth it. Sometimes, my impulsive decisions are not always the best, but I’m beyond grateful this one laid out as perfectly as it did.