Hi there! For just a quick introduction, my name is Sofie Gutierrez and I am an upcoming sophomore newly majoring in psychology and minoring in sociology. I have always been interested in cultures and politics; they always seemed much more relevant to everyone’s day to day lives than people give them credit for. Anyways, when I found the global classroom series for Portugal, I was ecstatic. I was able to study human rights, specifically with immigration, and I was able to finally get myself to Europe, a long time dream of mine.

The class was with Dr. Bakker, both a well known and super fun professor to go with. The course itself was very discussion based, letting the students both find and change their own opinions on topics many of us never even put full thought into. Being able to go on the trip to Portugal definitely made the class way more enhancing. During class times, we had talked about the integration of the Portuguese culture but actually being able to see more than 150 cultures all living peacefully within the same 3 mile radius of each other in Europe was a completely different experience. This was something I had actually been very interested in for awhile now. Though we live in America, the land of the immigrants, as much as we were integrated, we are an extremely divided country. However much we are integrated, we as humans love our niches and someone would be lying if they said they were unable to see the clear differentiations between our White, African American, Latino, Asian, and many other communities. People across the globe do this as well; people simply find comfort in their own likeness. This, however, can cause there to be separations in a country and culture when there are too many of these niches with their own set of food, morals, religions, etc, disputing one another. 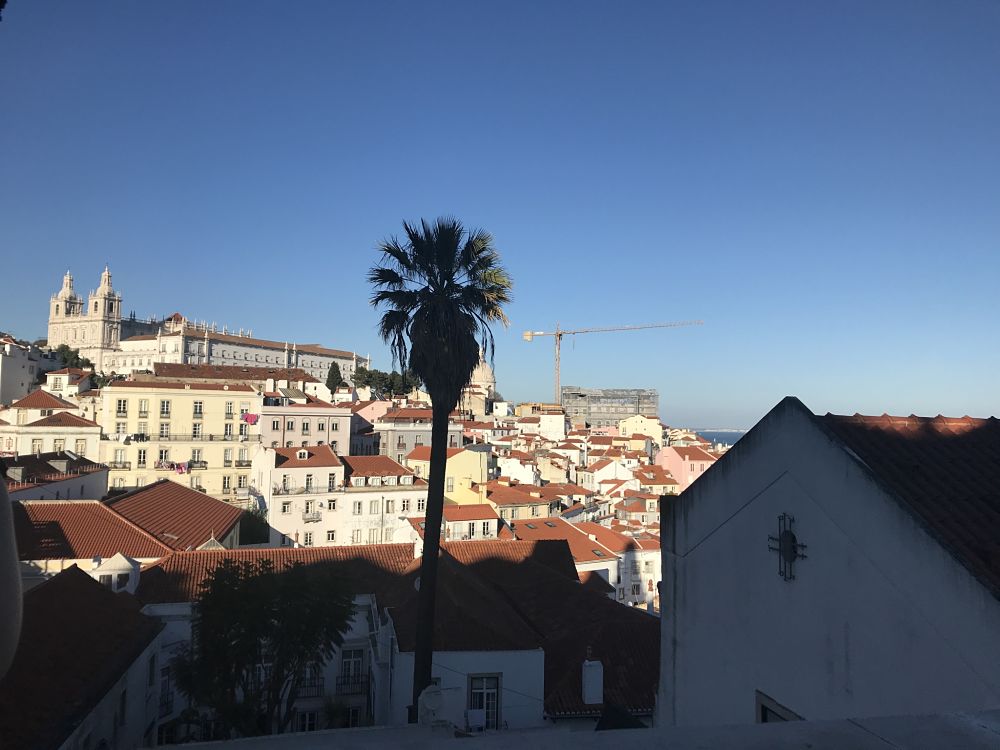 The landscape view of Barrio Alto, Lisbon, beautifully portraying the unique architecture of the city.

With all this in mind, Portugal has been setting an example for countries around to follow. For all the immigrants that come into their country, they make sure they are assimilated into the Portuguese culture enough to be comfortable with their new home but not in an all too well known colonial sense attempting to take away their individuality. People should still be able to keep their autonomy of choosing the culture they wish to align themselves with, whether that be their old culture or the one they walked into or even a mix of both. Regardless of which they choose, the ability to feel comfortable in their home should not be something that is based on where you are from and what ideas you follow; it should be received anywhere they choose to be. 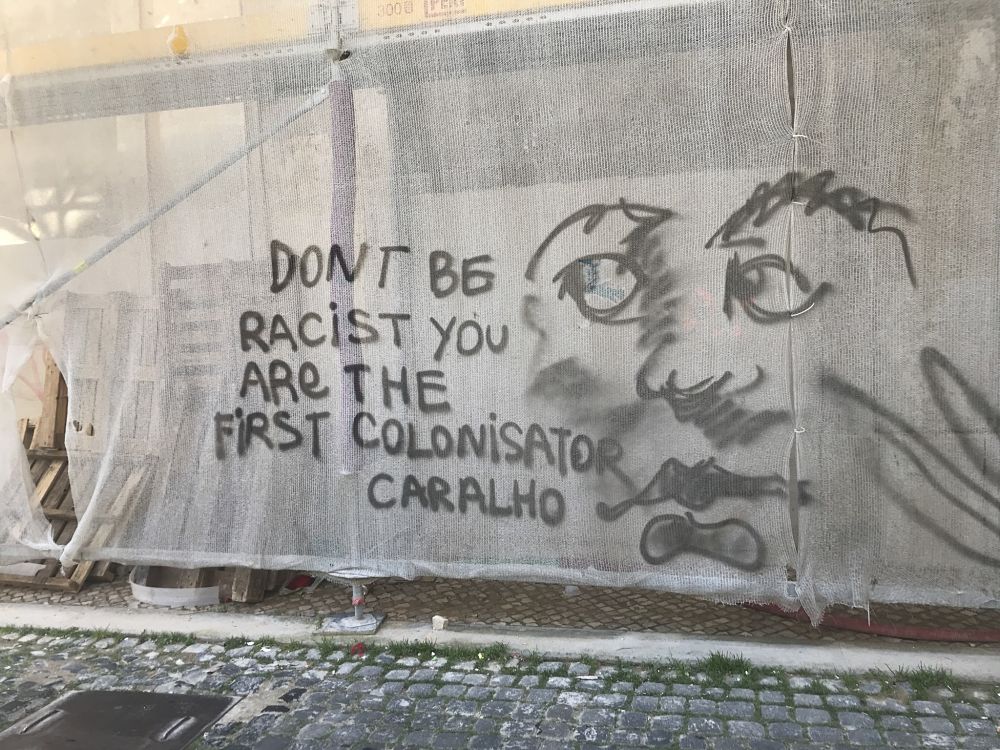 Graffiti street art along the Mouraria streets, a neighborhood known for its diversity.

During my time there, some friends and I had gone to Cascais, a beyond beautiful beach away from the city. As we were trying to return to the hotel we were staying at in the business sector of downtown Lisbon, we had gotten ourselves a little stranded on the beach, but by the good grace of Uber, we were picked up by my soon to be favorite Lisboner. He was extremely personable and friendly (actually a commonality I found among many Portuguese) and began by showing us his photography Instagram account that was essentially an homage to Lisbon street art, which is truly something to revel at. Anyways, we were chit chatting and we were telling him our predisposed opinions on Portugal: that though its immigration policies were welcoming, their economy was not stable enough for their ever increasing influx of people, especially with previous refugee crisis of the 21st century. Though he never told us we were wrong, he was able to tell us his own story of immigration and perspective that completely changed my opinion. He gave us a better insight on how well the interconnectedness of the country actually works and how immigration and integration into a society is a slow process and we would be naive to believe that all of societal, economic, and political issues would be fixed within a few short years when it often takes generations to truly see the finished picture, such as with their now long time Chinese immigrants that are in an obviously different place than the much more recent Iranian immigrants; and that’s okay! I was able to take this that he was telling me and use it to reflect it on my own country. 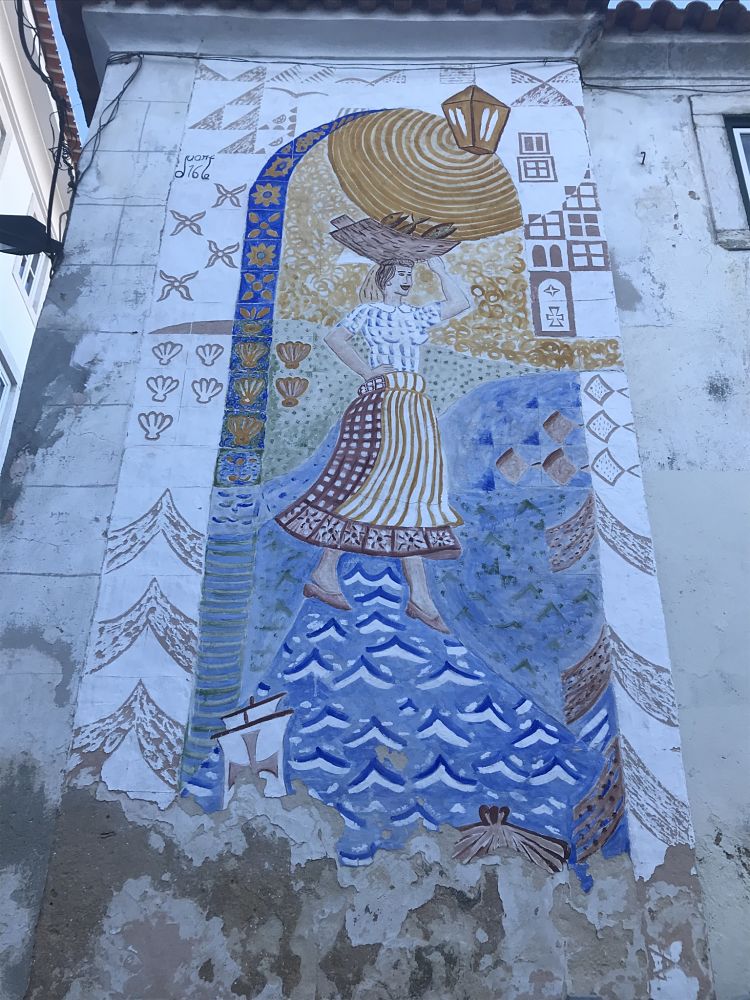 Some of the well known street art in the heart of Alfalma, Lisbon, one of their oldest neighborhoods.

America does little as a country to integrate their people into the society and thus the many niches aforementioned gets created and held up for years on end, but this does little to advance the country. If we were all able to learn from each other and gain from one another we would be able to have a much more fulfilling experiences as Americans and a better country at the end of the day. We also must learn to have patience; integration takes comfortability, both economic and societal, and just time. If a group of people are ostracized from the existing cultures and if they are not given the economic means to success, they will never be able to prosper. Through individual prosperity of people, we will be able to see that eventually the millionaires of the country will be many different shades instead of just one. Traveling in general is an important thing for anyone to do so that they may be able to see and experience more of the world around them, but it can also change the views on your own home if you let it.