I ran through the crowds, pushing past people as politely as possible and trying not to overturn any strollers.  Around me I heard shrieks and roars but I ignored them all.  Even though the zoo was open late certain habitats still closed early, which meant I had less than thirty minutes before I lost what could very well be my only chance to see a kiwi in the land of the Kiwis.

I eschewed every other animal, running past inhabitants of the African savanna with barely a glance.  My traveling companions were not as mission-focused as I was, and stopped at every loping giraffe or scurrying meerkat.  I must have seemed like a lunatic, rushing through the exhibits, stopping when I realized I was alone, running back, and dragging reluctant, paying customers away from the very animals we were supposedly there to see.

But every judgmental look from other zoo-goers was worth it.  I saw a kiwi!  There are several at the zoo, but whether or not any are visible at a given moment is a bit of a gamble.  It was pure luck (or the universe rewarding my efforts) that there was a kiwi right against the glass as soon as we walked in.  It shuffled around the front of the enclosure for five minutes or so before retiring to one of its little huts and staying there.  Had we lingered at the giraffes just a little bit longer, we might have missed it!

Kiwi birds really are odd creatures.  Despite being covered with feathers, their round bodies have a furry, fuzzy appearance.  They are the only bird with nostrils at the end of their beaks.  They can’t fly.  They shamble awkwardly when they walk; I saw no evidence of the alleged fact that they can outrun a human.  One of the information placards described them as “shy and secretive, yet feisty and territorial.”  I can’t really explain what’s so appealing about them, but there’s definitely something – a single glimpse of that mud-colored ball made me as giddy as a child on a merry-go-round. 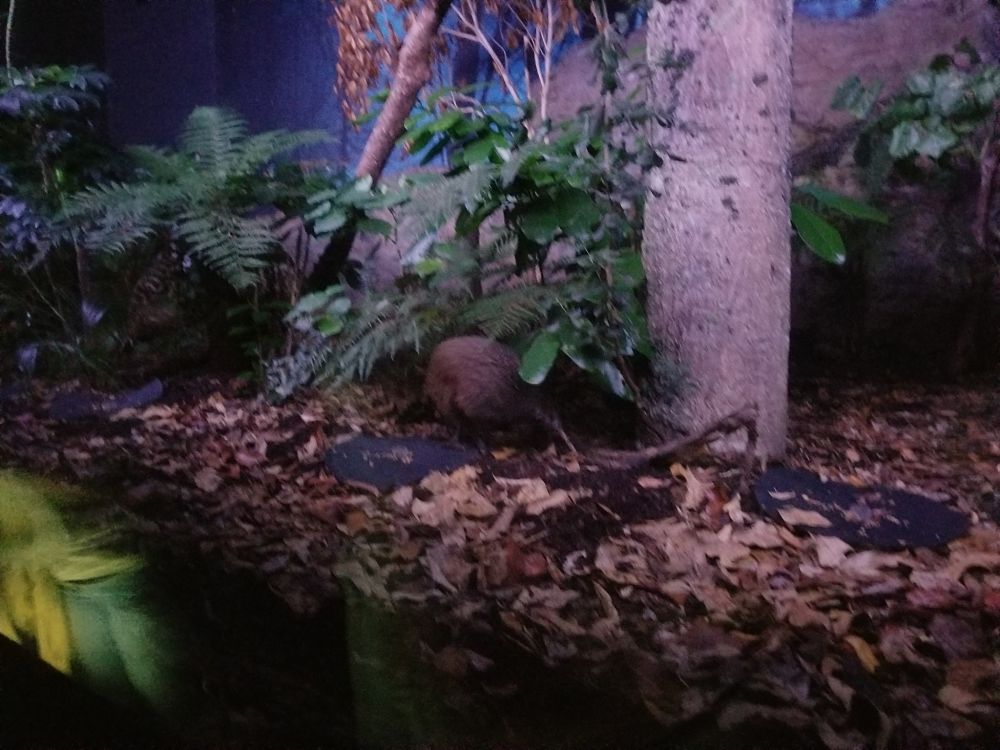 The elusive kiwi! My time in New Zealand is now complete 🙂

Having achieved my main goal of the day (and, in fact, one of my main goals of coming to this country), I was free to thoroughly enjoy the rest of the zoo as well.  Auckland Zoo is wonderful, a huge place with extremely impressive animal habitats.  One cool thing they do is combine in the same enclosure animals that would normally interact in the wild.  A single, expansive enclosure housed a rhino, a small herd of nyala deer, some rabbits, and some ducks (the ducks may have been intruders).  In the area next door, the giraffes and zebras shared a living space as civilly as possible while completely ignoring each other.

One of the zebras was a baby, Eve, so named because she was born this past Christmas Eve.  She caught my eye because when I got to her enclosure she was spasming wildly in the dirt.  At first glance it was actually quite alarming, and I was very grateful for the zoo volunteer who chose that moment to approach and assure me that Eve wasn’t having a seizure.  “She’s having a bit of a play before bedtime,” she said, and with that in mind Eve’s thrashing suddenly seemed less like she was dying and more like she was a little kid having a blast.  She eventually got up and switched to sprinting randomly around the pen.  She didn’t handle corners very well, but the enthusiasm sure was there!  After poking and running around her mother and aunt for a while she wore them down enough that they started trotting around with her. 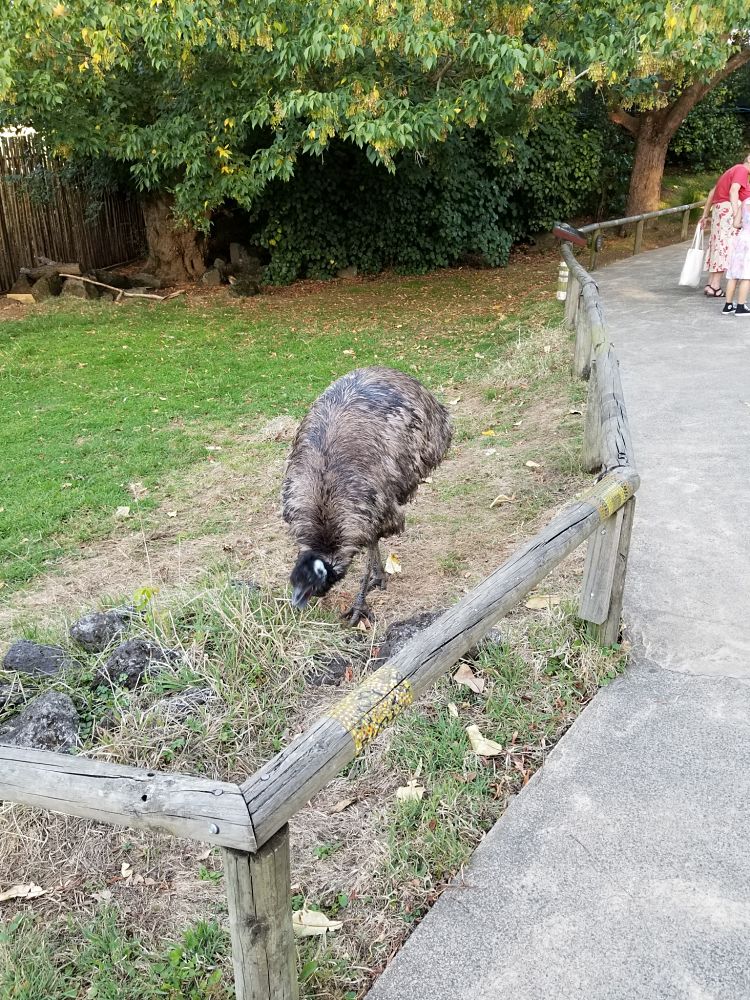 This “fence” was the only thing between us and the emus and wallabies!

In the Australia section the wallabies and the emu are together, except in this enclosure they’re also with the humans!  You enter the pen through two sets of doors, and follow a path through to the other side.  The path is “walled” off by a short fence made up of one level of thin log set about a meter above the ground.  This works to direct the humans, but there is literally nothing else to stop people being mauled other than the animals’ whim!  Wallabies might not be natural maulers but the emu could certainly do some damage if they wanted to.  Fortunately none of the enormous birds chose to attack us this particular evening – I attribute this to their ability to sense our respect and adoration for their fuzzy, flightless cousin.