This past weekend I had the opportunity to visit the beautiful Bay of Islands in the north of New Zealand.  My traveling companions and I booked a day tour on a forty-person boat that would take us through a bunch of islands, through the Hole in the Rock formation, let us help drop off supplies at some of the more remote islands, and to swim with dolphins if we could find any.  Unfortunately, the sea was incredibly rough that day and we didn’t get to a lot of our itinerary.  We did not get to swim with dolphins.  We did not get to go through the Hole in the Rock.  We did not get to make deliveries to any of the islands.  We did, however, get to go boom netting.

I had seen pictures of this activity online, and it looked like a delightful sort of makeshift pool set up in the ocean.  Two long poles extend out from the side of the boat, holding between them a loose net that falls half-submerged in the water.  It seemed to be the perfect way to experience some ocean water without any of the inconveniences of actually being in the open ocean (like drowning or drifting too far away from the boat).  Out of all the tourists on our boat, about a dozen of us elected to try it.

The first step was jumping in.  The edge of the boat was about seven feet above the water, and apparently the ladder that was right there was only for getting out, not getting in.  This meant that there was no testing or easing into the freezing water, or keeping from being completely submerged on the jump.  Last in line and regretting the choices that had led me here, I was urged (read: ordered) in by the crew, and was actually feeling pretty good about the whole thing when I sputtered to the surface without losing a contact lens.

Then the boat started moving.

As the boat started moving forward, water rushed through the net pushing us all back towards one end.  Since that end was already full of people, I held on to the net where I was in an attempt to keep my place and not crush anyone.  As the boat picked up speed, though, the water became harder and harder to resist and the fingers and toes I’d laced through the net started to ache and burn. 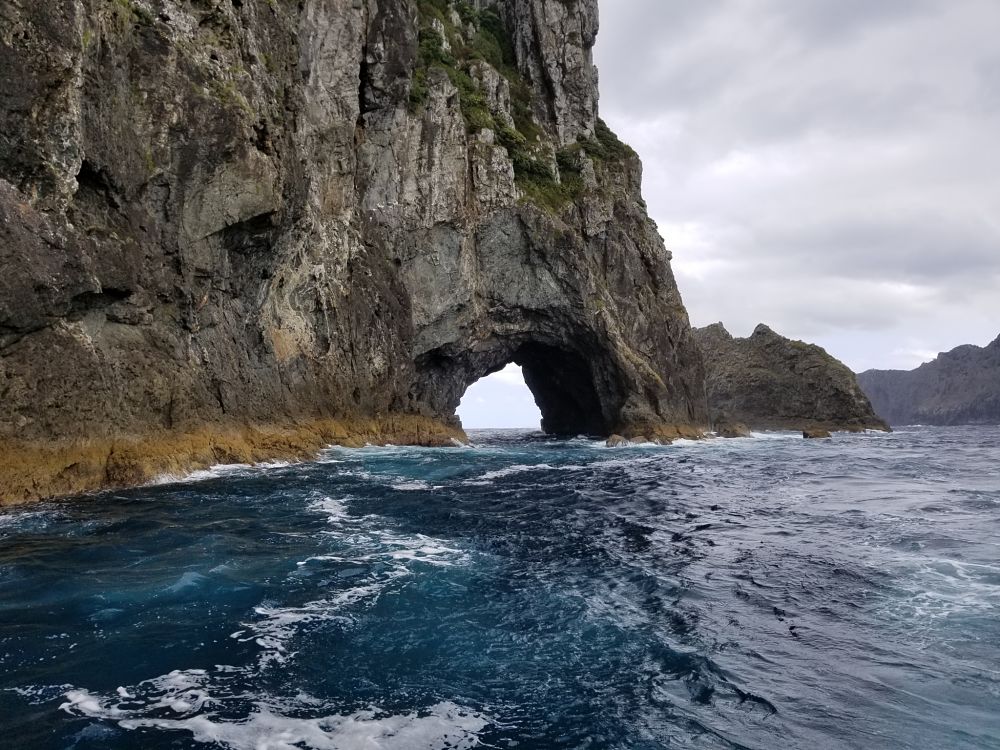 The Hole in the Rock. The multi-tone water is exemplary of the whole area.

All I could picture were horrible scenarios of someone (probably me) losing a finger or toe in the netting, because there was absolutely no way that my knuckles were stronger than the firehose-like blasting water.  I was so convinced that a dislocated finger was imminent that I was actually relieved when, at the next big current, my fingers gave out without being ripped off and I was flung back into the wall of people lining the end of the net.  They could see me coming, and I’d started yelling, “Sorry, sorry!” as soon as I’d lost hold of the net, but with the boat powering ahead them moving out of my way was as impossible as me not slamming into them.  Seemingly in slow motion, I crashed into two college-age girls, and all I could do was keep yelling “Sorry!” into the ear of the unfortunate girl whose head I was pressed against.  She didn’t answer, which looking back I preferred because the other girl I was crushing started screaming, “My leg, my leg!”  I could feel her leg between me and the net, but for the life of me I couldn’t push myself off of it.  I was reminded of those amusement park rides where you’re kept in your seat by centripetal force alone, unable to move as you’re flattened into your seat or anyone sitting behind you.  All parts of my body that were below the water line were completely immobile against the net (and that girl’s leg).  After what felt like years but was likely only about ten seconds, the boat stopped moving and the crushing water eased as abruptly as a faucet being turned off.  Whether the timing of our reprieve was due to luck or the crew deciphering the mixed screams of “Sorry!  My leg!  Sorry!  My leg!” I have no idea.

In our moment of still water we rearranged ourselves against the net wall, and it did not appear, thank goodness, that I had broken that poor girl’s leg.  I had half a moment to heave a huge mental sigh of relief before the boat started moving again, but in reverse. You might think, as I initially did, that this would be better, but it was not.  The water shooting in from behind me was now doing its best to throw me down the entire length of the net into the opposite end, where there was a man perched holding his toddler daughter.  I wasn’t eager to break a baby’s leg, so without thinking I did the same thing that got me in trouble in the first place: I laced my fingers and toes into the net in an attempt to out-muscle the water.  I did manage to stay anchored to the wall this time (though I was picturing detached fingers floating in the water again), but then another danger reared its head: rising water.  Repositioning myself while the boat was moving forward or backwards was impossible, and during the brief breaks there was only so high up the net I could climb.  The boat started moving faster and faster, which meant the frothing waves came through the net higher and higher.  My head was never fully submerged, but the water did bubble up over my face on one stint, leaving me gasping and sputtering and thinking how this was exactly what a Bond villain would do. 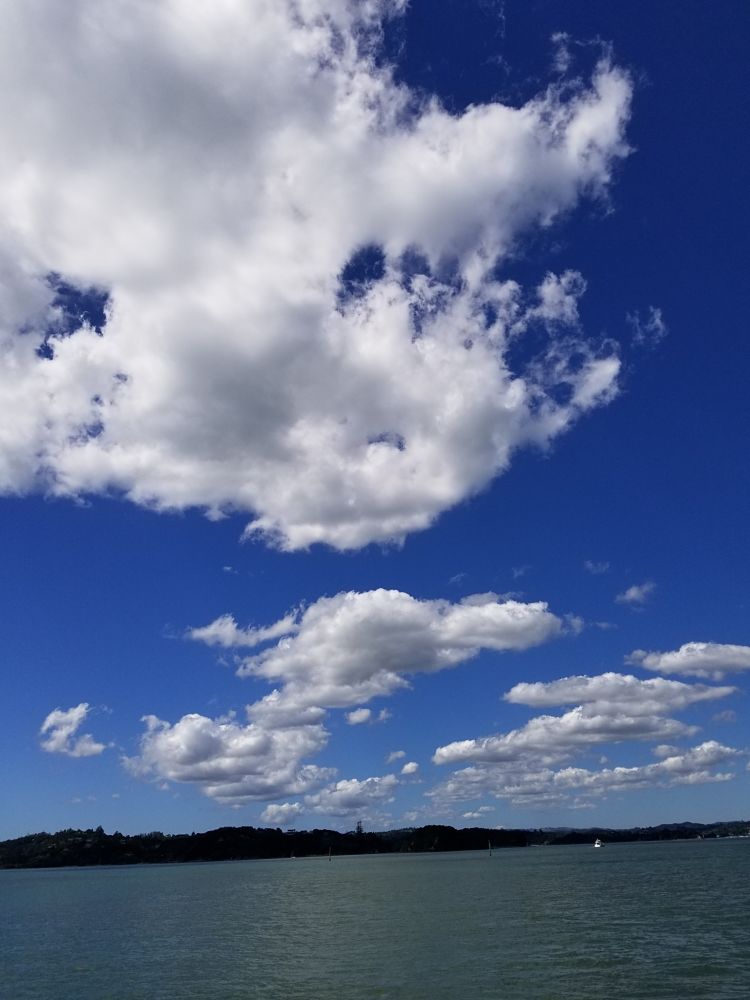 The clouds seemed to hang directly over us.

Ten hours later (or, as I was told, about six minutes), our fun little excursion came to an end.  We were permitted to use the ladder to get back onto the boat, where we all stood shivering to catalogue our injuries.  We were covered in scrapes and blossoming bruises.  One of my friends had gotten herself a great spot by hanging on the thick rope at the very top of the net, but it cost her a spectacular bruise that took up half her bicep.

Once it hit me that I was out of the water and hadn’t drowned and still had all my appendages, I got to enjoy a delayed sense of exhilaration.  The friends who’d talked me into doing this in the first place even got me to admit that I was glad I’d done it.  And I am glad I did it – it was a unique experience that I now never have to do again.  In fact, I highly recommend boom netting to everyone.  Once.  And not in the middle of the net.