I have discovered many wonderful things about New Zealand since arriving a few weeks ago.  The people are incredibly welcoming and friendly.  The accents are delightful.  The weather is gorgeous and everywhere you look the scenery is like something out of a movie.  Schools provide dental care for elementary schoolers.  Currency actually has kiwi birds on it.  There are no snakes anywhere in the entire country.  And every morning, at ten-thirty AM, Wakaaranga School has morning tea.

The bell rings midway through the morning to signal the start of a twenty-minute morning tea.  The students grab their hats and snacks from home and run outside to eat and play.  The teachers – every single teacher who is not on duty monitoring children on the playgrounds that day – meet in the lounge.  I’ve heard my school’s lounge is considered a little small, which shocked me on my first day because it is easily more than twice the size of my school lounge in the U.S.  I couldn’t imagine why a lounge this big was needed until I realized that it had to fit the entire staff at one time.  Breaks aren’t staggered by grade level here like they are at home.  Morning tea is not only a wonderful break in the morning for both the students and the teachers, it’s communal and practical for all the teachers to be gathered in one place at the same time.  Principals make announcements, teachers confer, and new student teachers get to meet everyone at once. 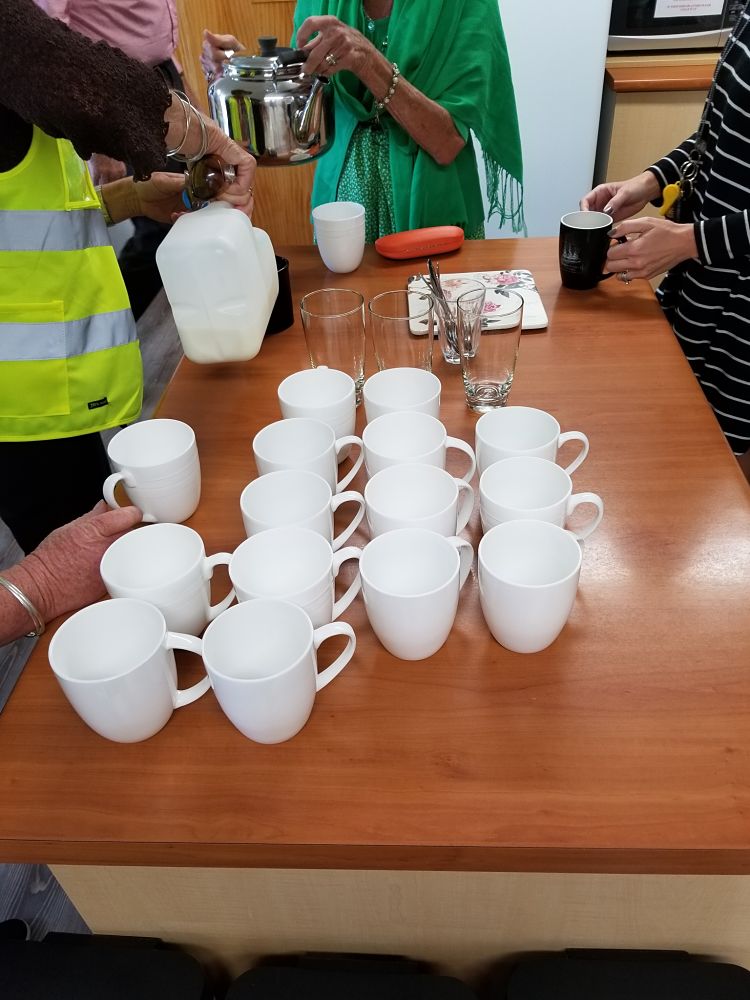 The morning tea setup: the watering hole of Wakaaranga School.

Morning tea at Wakaaranga begins with everyone who walks into the lounge grabbing a mug.  There is a hot water faucet over the sink and a box of assorted tea bags, a large kettle of ready-made tea just waiting to have some milk poured into it, and an espresso-like machine that dispenses hot chocolate and multiple kinds of coffee.  I have never seen anyone without a mug of something at morning tea, with tea-with-milk being by far the most popular choice.  Then, at each table around the lounge, there are plates of snacks.  The snacks change every day but always include some kind of cracker with slices of cheese, biscuits, cookies, and sometimes pieces of candy.  I’ve been introduced to several “Kiwi snacks” at morning tea, such as Jaffas (balls of dark chocolate with an orange-flavored coating), Pineapple Lumps (chocolate coated chunks of taffy that taste much better than the name would suggest), and Chocolate Fish (pink marshmallows shaped like fish and coated in chocolate).

Each week, though, the splendor of regular morning tea is eclipsed.  Every Friday there is a full English tea, and the grade levels rotate who puts it on.  At the full tea there are all the normal drinks but way more food.  There are homemade cakes instead of cookies, fruit instead of crackers, and mini savory pies.

Pies are probably my second favorite discovery after morning tea.  They’re not like the pies I would think of at home, which are desserts and are usually made with fruit.  These pies are filled with all manner of meats and serve as full meals all on their own.  My absolute favorite is bacon and egg pie, which is made exactly the way it sounds: pie crust is placed in a pan, a mixture of egg and bits of bacon (or sometimes larger chunks of ham) are poured on top, the top layer of pie crust is laid on, and then the whole thing is baked in an oven.  It is to die for.  This kind of pie is often made at home or found in bakeries and cafes, rather than at morning tea.  Mince pies are more popular there, and they’re absolutely delicious even though I’m still a little weirded out by biting into a pie and having meat stew spill out. 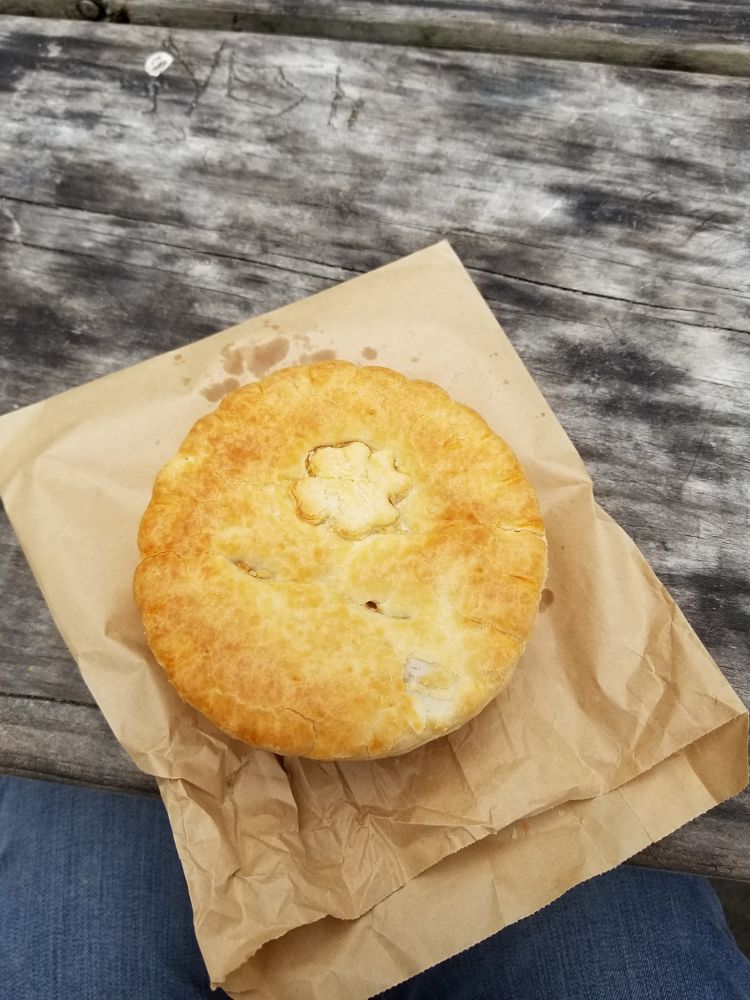 These pies can be found at almost any bakery or cafe, and may be served hot or cold. Inside is nothing but bacon and eggs!

None of my colleagues here can believe we don’t have morning tea in the U.S. (“But what do you do between breakfast and lunch?” they ask with a mixture of pity and horror.).  They’re all encouraging me to bring the tradition back and introduce it to my school.  I doubt it will work, but I fully intend to try.  I’m going to be very unpopular at my school when I get home; every day at ten-thirty I’m going to be that teacher wailing about morning tea.