As you can imagine, panic has finally settled in. Not only do I only have two weeks left in Korea, but I have to spend most of it studying for finals, packing, and preparations for next semester. Korea has become another home, I’ve built a bond with the school, the students in my classes, and overall I’ve built friendships. I’m worried these last weeks will be so hectic, I won’t be able to reflect on all the people and places I’ve bonded with. I’ve had my ups and downs here in Korea, but overall Korea has been a positive and amazing experience. I’m not going to lie: I miss my family and friends back home so much! I’m excited to get back home to California, and then Virginia for school, but I know I will begin to miss Korea. I wonder what it will feel like to be back in the US.

Before arriving to Korea, I had specific assumptions and goals. Finals week is arriving so I decided to spend some time looking back at what I had written down at the study abroad orientation, and discussed with friends and family. I still remember the specific blank and personal goals I had written down. It’s strange imagining myself back before I arrived, focusing on the steps I needed to get done to enter the country. Looking back at my (professional goals) academic goals, I wrote down my desire to learn what different political views students and regular citizens had both on their current administration, and democracy in general. Though it didn’t happen right away, after getting more comfortable with each other in class, it was apparent how pro democratic the students are. 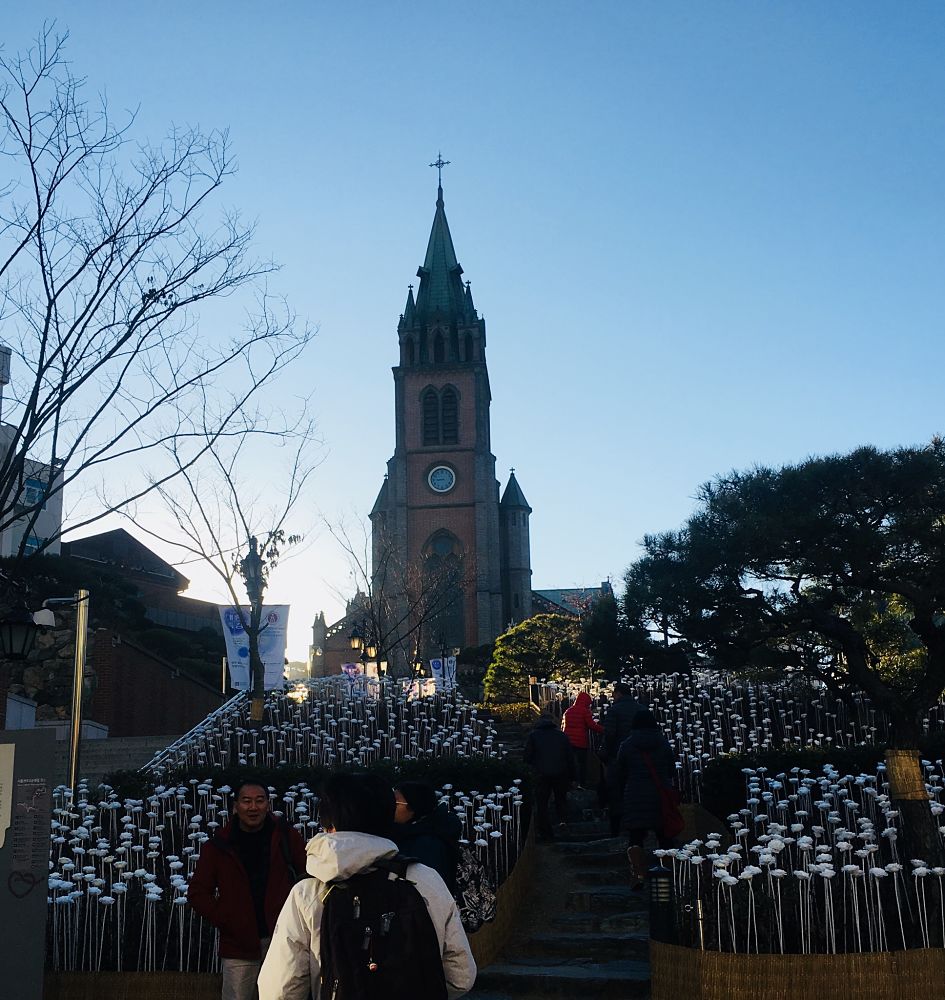 Taken recently after they placed these white flowers on the Myeongdong Cathedral lawn for Christmas.

For a country that wasn’t a democracy until 1948, you come in contact with adults who knew what it was like before Korea became democratic, and the young students that were born into democratic Korea. It wasn’t until 1987 that the electoral system was viable, but really South Korea wasn’t a fully democratic country until 1997. Being such a new democracy, there is still lingering evidence of contrasting political views. With my prior knowledge of their history, I assumed the citizens were more protective of their political system, demanding a great amount of transparency. Unlike Americans, many citizens have personally witnessed the transformation of their government. I didn’t just pull this assumption out of nowhere, but real life can sometimes fulfill 100% of expectations. 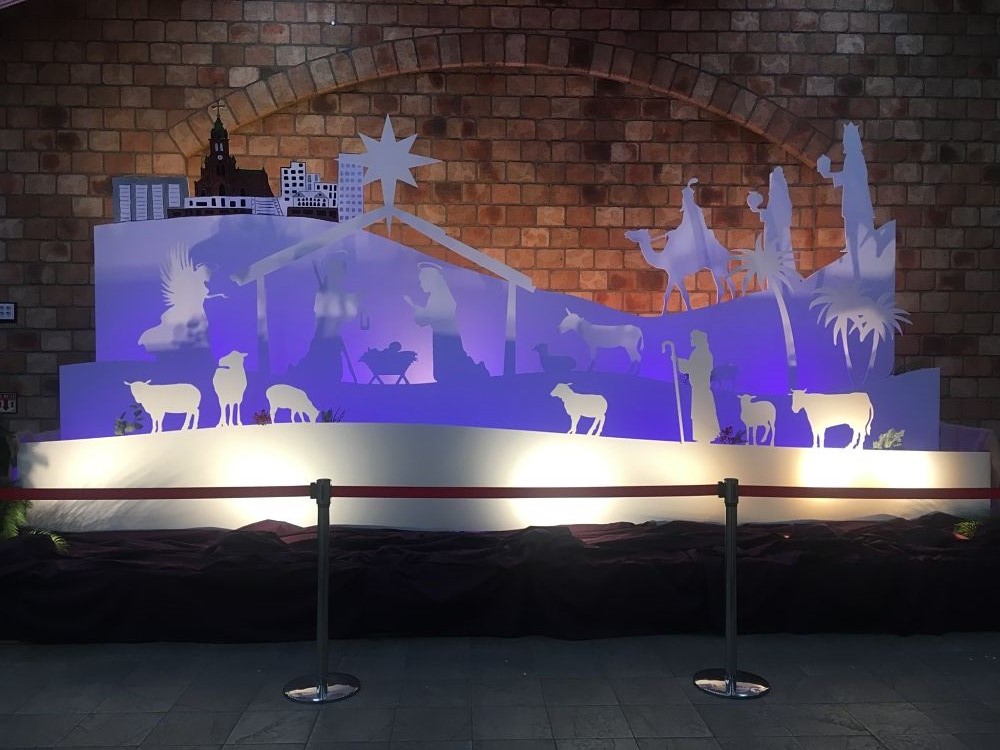 In the Myeongdong Cathedral shopping center, I came across this beautiful set up of the nativity.

Upon arriving, I didn’t have any conversations about politics, because I doubted that would help me make friends; I may have freaked someone out if I just ask a cafe barista their views on their current government. Though I didn’t hear opinions vocally, I did come across evidence of their democratic beliefs taking place. The TEAN program put us up into a hotel our first week here, which was located near City Hall. When my friend Leanne and I were walking around there, there was a march to city hall going on. It’s illegal for me to get involved as a visitor, but I did stand aside and observe. It reminded me of the different marches I see in the Washington area. Cops were not stopping them; they just peacefully marched around the area up to city hall building. I found it fascinating to watch something very democratic happening in a country on the other side of the world with a whole different culture/ history.

Throughout the semester, a few of my professors have brought up current and past political issues. Encouraging participation, I have been able to hear different opinions from both on the past election and current administration in their country. My Political Institutions professor has stressed to his students how lucky they are to live in this legitimate democratic time, while he had to grow up in fear to speak ill of the government. Just yesterday, he went on to express how proud he is of what his country has accomplished both economically and politically. It’s been amazing listening to his stories of the past and present living in Korea. I can honestly say that goal has been fulfilled. 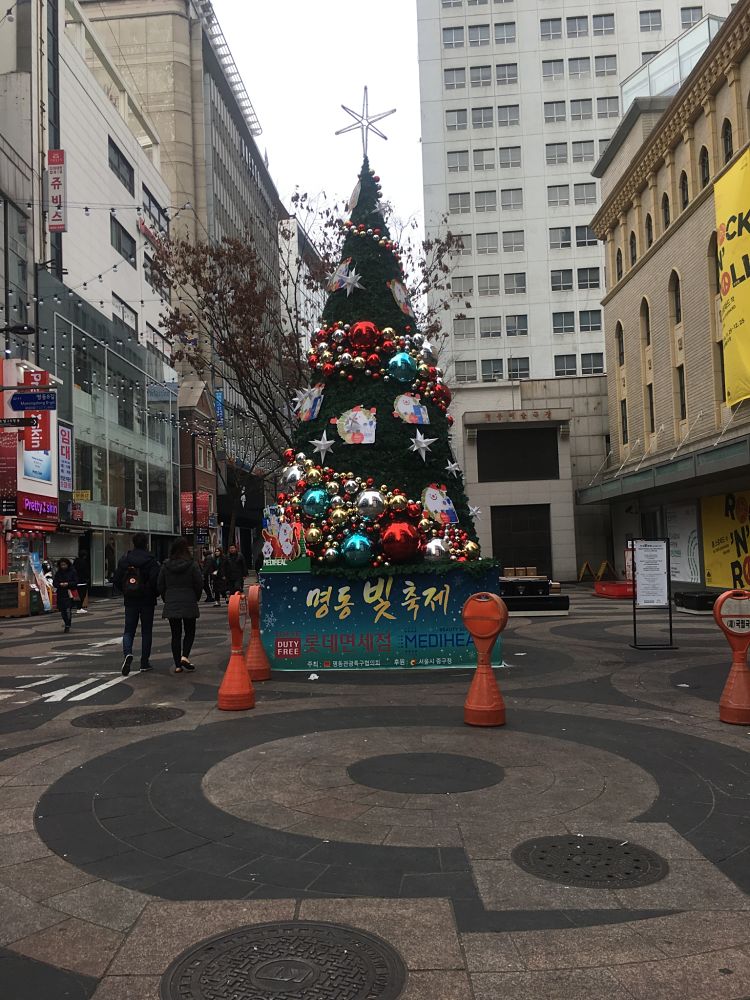 On a personal level, I wrote my desire to form friendships and become engulfed in the local culture. Though I haven’t picked up the language as much as I hoped, it hasn’t stopped me from experiencing their culture. I have realized that as the semester went on, I became more confident to communicate with people even with the language barrier. Many of my friends become awkward or too afraid to ask questions, but I told myself to try my best to use the language, but if I couldn’t, I wouldn’t let it prevent me from communicating with locals. I found that as long as you try, most citizens will be happy to help without judgment. I’ve never been afraid to talk to people I don’t know, and traveling to a new country is the last place you want to keep to yourself. I know that if my future career entails communicating with Korea, I have the ability to understand where they come from socially and politically. In four months, I can’t say I have experienced all aspects of their culture and country, but I can say it has definitely helped. Though I’m going to miss Korea and their people, I’m excited to apply what I’ve learned to both my everyday life and the future. I was actually surprised how many people came to Korea just because they wanted to go to Korea. I can’t lie and say that was the majority of my reasoning too, but I also made the decision based off what could help me with my politics major. This may make me seem lame, but, honestly, I was both interested in the social and the academic part of the program. Both are important to grow as a person and a student. After these months, I know that even if you come just to experience the culture, not academics, you will still learn so much. 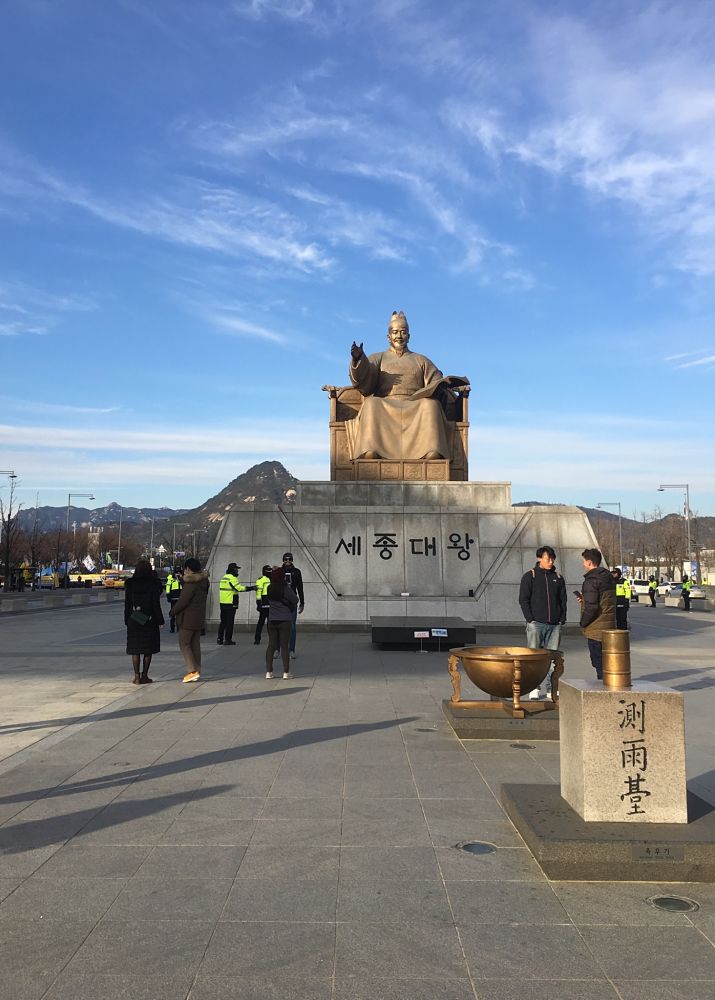 Found in central Seoul in Gwanghwamun Plaza is the statue of King Sejong. Dedicated to the 15th Century Monarch, known to be on of Korea’s most famous historical figure.

Overall, I can say I’ve accomplished all my goals! And now I just need to decide what last-minute places I need to visit! As I write this, I am already starting to miss things. If I had to choose what I will miss the most as of right now, it would be getting served kimchi at almost every restaurant because, dang, it’s so good. I’m overall excited to use what I’ve learned to both my personal and professional life. I came here with a political goal, and though it hasn’t changed my overall political career goal, it has changed how I see different department options. I wouldn’t trade this time I’ve spent here for anything. The next time I write a post, I might be back home, and that’s scary but exciting to think about.