On November 16th, Korea University held their annual International Cultural Festival. This festival is held to give all international students opportunity to share their culture with both the Korean and other international students. To share one’s culture, it was asked to provide food and drinks mainly. Each culture that volunteers for the festival is given their own booth. It was encouraged to decorate and/or provide fun games about their homeland. With permission and help from the KUBA team, the students meet up and plan what they want to serve the students and what products they will need to fulfill their plan. As advertised, the Facebook announcement expressed it as a “opportunity to share and experience cultures from all around the world”.

The day of the Festival had finally come, and I was extremely excited. As someone who is mixed, I grew up eating foods from different parts of the world. Missing my food from home, this was a way for me to get a small taste of it, while experiencing cultures I didn’t know much about. The festival took place in the main outside patio. it was beautiful to see a huge crowd of students from all different countries become more informed of cultures around them. Being a homogeneous country, meaning very low ethnic diversity, this festival is very important. In America, we take for granted how ethnically diverse we are. South Korea is rarely exposed to a vast amount cultures, this is a fun way to give the students a small glimpse. 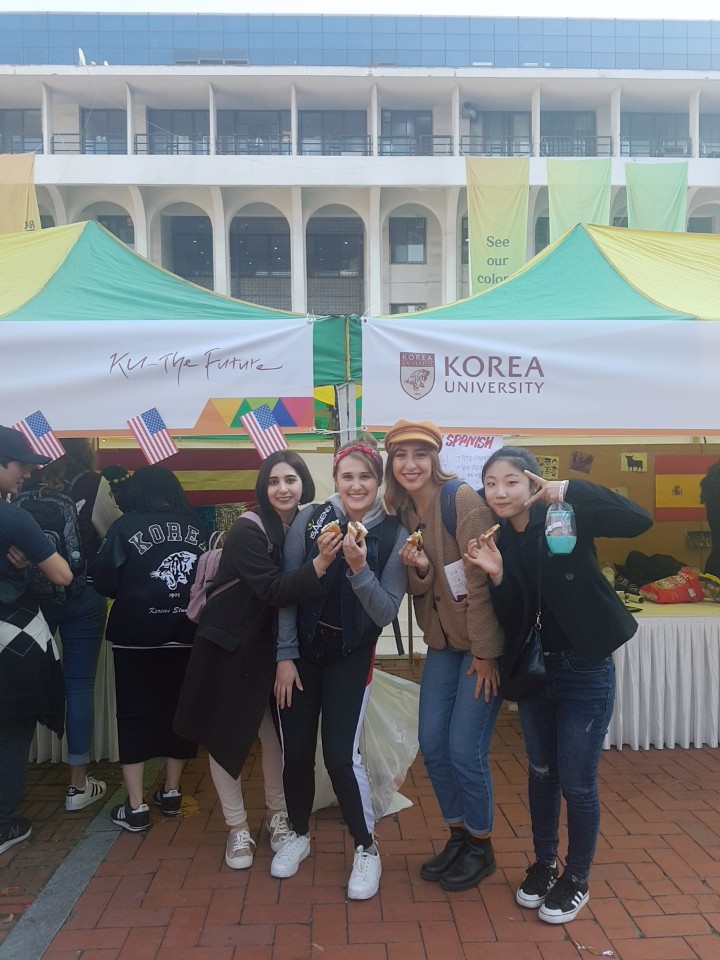 Each booth had a few international students serving drinks (both alcoholic and non-alcoholic), and snacks. Making my way around, each booth was so welcoming and all the students were so excited to share even the smallest glimpse into their culture. In the center their was a stage where a fashion show was held, students dressed in cultural garments from their home country. The fashion show was more just a fun light-hearted one, where the students would get on stage and either dance around or walk around to show their outfits. Obviously you can not show every true aspect of ones culture with food/snacks and some drinks, but it didn’t keep everyone excited to share what they could.

Each booth seemed to run smoothly. From what I experienced, there were no evidence of political views or stances at any booth. Each booth had more traditional decorations and some provided trivia games consisting information on their slang or celebrities. Places like Australia and England had fun quizzes to test people’s knowledge of their slang words. Russia and india’s booth provided paper so you could practice writing your name in their language. Each booth stayed away from displaying political positions or images of their leaders. After I made my rounds and talked with friends at each booth, I was so happy that Korea University gave us all an opportunity to express our cultures and show how diverse we really are. 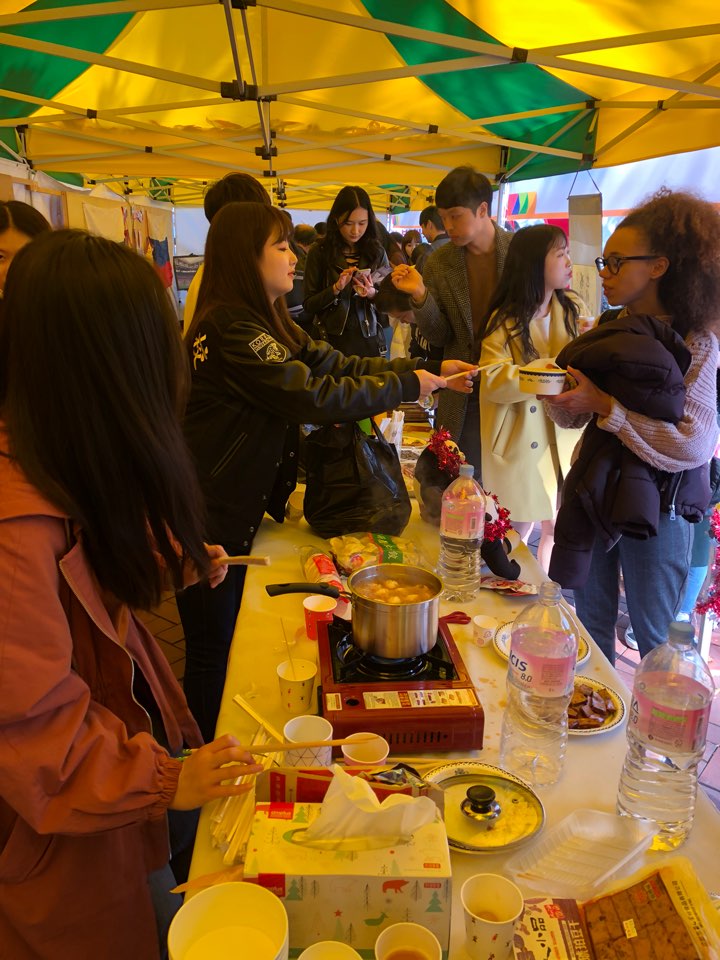 Taken at the international student festival

The next morning I woke up with 116 texts in my group 3 KUBA chat. Waiting till I was fully awake, I finally decided to tackle the texts. Starting from the first unread text I came upon a very long one starting with “dear all KUBA”. I prepared for a long thank you text to all the KUBA leaders for such an amazing event. The text did begin on a positive note, exclaiming gratitude for an open and welcoming event. The gratitude did end though, about halfway into the text, the sender brought up an issue they had with the festival. Without exposing any personal information of the sender, I wanted to bring up the controversy they brought upon a great event. The text contained complaints concerning one of the booths. The sender was speaking for the China booth, and was upset that Tibet had a separate booth. They felt the separate booth showed that Korea sides with Tibetan rebels, who have been protesting for sovereignty. All the texts that followed were responses from all group 3 members. It would be an understatement to say majority of the members were upset with the sender for bringing his/her concern upon a fun clubs group chat. At first I thought it was just one upset student in my particular group, but more students from the China booth wrote a similar message on the whole KUBA Facebook page. The students were upset that Korea University allowed Tibet to have a separate booth, when they are part of the Peoples Republic of China. 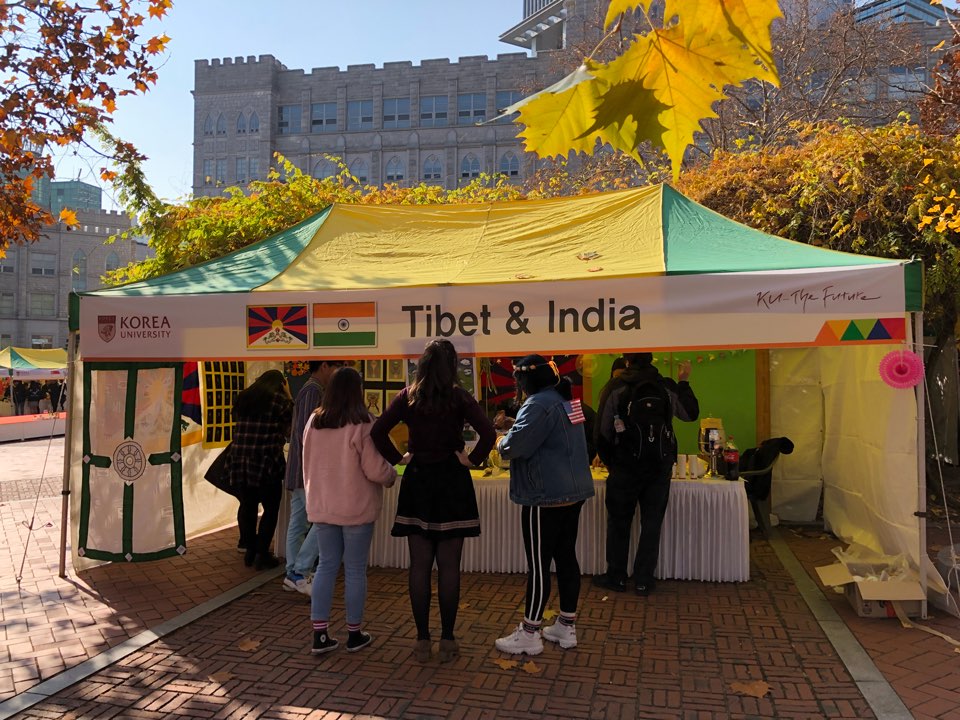 The Tibet booth which didn’t have a lot of students, shared the booth with India

In response, the KUBA leader tried to explain that they didn’t do it to bring up any political issues, and Tibetan students wanted to show their different culture. The few students who were upset, continued to go to the Chinese embassy and a couple news agencies to complain. How could a cultural event become so political? I think it’s great that college students are so open to have discussions about world issues, but I don’t know if a fun event was the place to do so. If not a college festival, I wondered if there was any way we could have these discussions.

It still saddens me that a wonderful event has turned into a controversial one. As a political science major, I took this event as an opportunity to look more into the China and Tibetan issue. I didn’t give any opinion on social media, because I am not well informed on the issue.  This made me realize that there are many issues around the world I am unaware of, and I think it is important to change that. Though I didn’t want to get involved, it was eye opening on many view points of students from around the world. Students from different types of governments banded together to diffuse the situation. With such a big group of international students, I was worried this complaint would bring up more controversial issues, but instead we all agreed that the festival was extremely fun, and allowed us to share our cultures without politics. Though I believe students need to have discussions about what is happening around the world, I hope that we can keep politics out of cultural celebratory events.