I’m here to take you on my diet journey. So technically, I wouldn’t say I’m a vegan, but for about five years I’ve cut out red meat and prefer to choose dishes without animal products. This decision was made to improve my overall health, specifically my heart. I began making my own meals and developed a preference for the different replacements. It goes back to one Lenten season, a Christian tradition, taking place six weeks before Easter. My sister and I went vegan. After Lent was over, I didn’t realize I had developed a preference for vegan replacements and meat wasn’t as delicious as it was before. Until I came to Korea, I hadn’t realized how easy it was to be vegan in America; and even easier in my hometown in Southern California. Spending summer in California didn’t necessarily prepare me for the diet change I would have to make in Korea.

When it was confirmed I was going to be studying here, I made a decision to give up any diet restrictions. This was a conscious decision made for two reasons. Korea doesn’t have many vegan options available; most meals offered contain some type of animal product. It could be fish, beef, chicken, eggs etc. Koreans love red meat; some places I’ve been to don’t even have chicken options. I don’t think this is necessarily a bad thing, but for those who are more health conscious, it can be a struggle. The second reason is that their food is delicious! I would be dumb if I came to Korea without indulging myself in their popular dishes. I’m sure most of you have heard of, or eaten Korean BBQ. Though that isn’t the only thing they eat here, it’s a good representation of their love for meats. 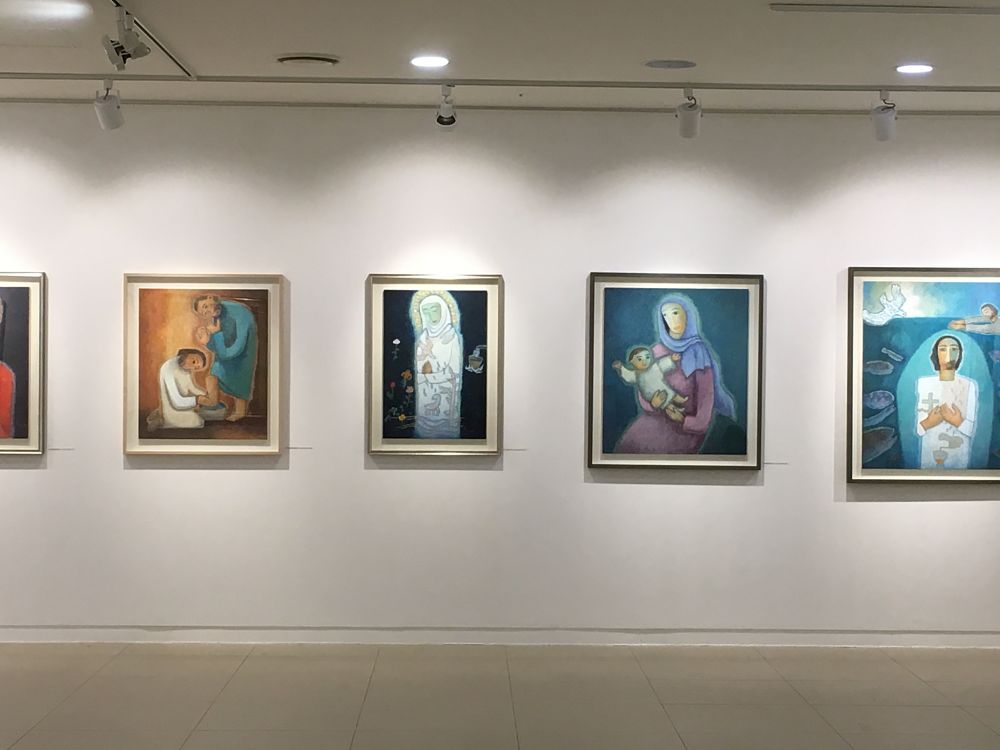 This was at the Myeongdong Cathedrawl Museum at a temporary art show this past weekend.

For the first month here, I went all out! I probably had more meat and dairy in this one month than I had in the past five years. My favorite meal has been Jjimdak: a big dish made up of chicken, veggies, a specific sauce, and then any other meats and toppings you desire. My friends and I would usually get it with glass noodles, rice cakes, and cheese melted on top. This dish is served in a huge pot on your table, and is a big shared dish. As you can see, not very vegan. I started to realize that maybe it wasn’t the smartest idea to just dive right into a completely different eating lifestyle. I began to feel the effects of too much sodium in my system. This may be a placebo, but I’ve decided not to risk it.

All the art was done by one nun. I was able to meet her and she explained the different art pieces to me.

I’m not gonna lie: it’s been a struggle. I’ve been going to nearby markets and buying my own groceries. The produce here is pretty expensive compared to the US so it’s pretty expensive to eat plant based. For example, a watermelon here is on average, $23! I bought a watermelon this summer for $2 back home! The positive has been that I have been able to make foods with new ingredients. Each plant based meal I know how to make contains multiple Korean grown produce that I wouldn’t likely use back home. I’ve made salads with Korean vegetables such as bok choy, shiitake mushrooms, bean sprouts, Korean cabbage. All these ingredients are delicious and great for you. I’ve drank pear juice that is made specifically with Korean pears. I’m happy to find great produce from Korea that can help change my diet. At moments, it can be hard,  walking past delicious street food for only $2 and I have to pay $20 for a small amount of groceries. 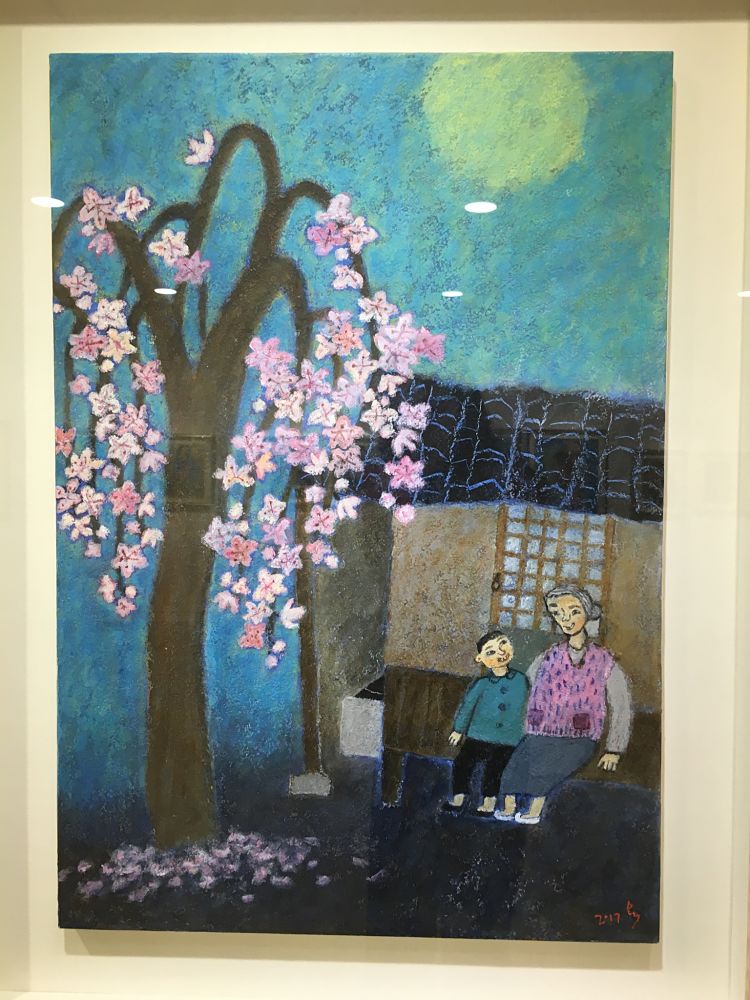 There were Biblical story pieces and traditional Korean story pieces. There were so many beautiful paintings and she painted them all within three years.

So I’m not stuck in my dorm room making dinner as all my friends go out, I’ve been on an intense search for vegan restaurants. Besides a juice stand near my dorm, I found a vegan restaurant somewhat close to my school. The restaurant is called Cafe Vegan, it’s a small, cute cafe run by one woman. The menu is very diverse and satisfies any craving. They have everything, from shrimp pad thai to cheese burgers and if you are feeling for dessert, there is even ice cream. The best thing is there are coffee drinks available with soy milk replacements. I’m super stoked about finding this place, but it is a little pricey. Each meal is $11, compared to the cheap large dishes I can get everywhere else; it does hurt the bank a bit. 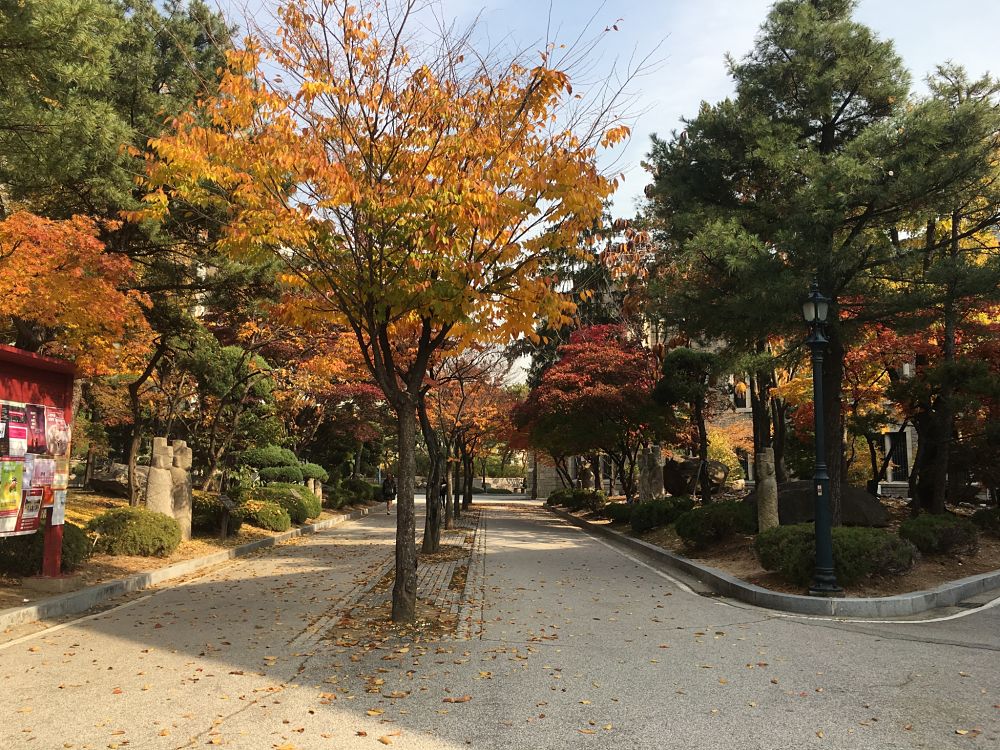 These photos were taken by my dormitory.

Most of the restaurants I’ve found are placed in Gangnam and Itewan. Gangnam is a wealthier area and has a more western city vibe. That said, most of these vegan restaurants can range up to $25 for a salad. It’s a little disappointing that it’s pretty expensive to eat healthy. Itewan is similar to Gangnam with it has more of a western feel, and happens to be where many foreigners who have immigrated to South Korea live. Itewan is the place to go if you are searching for more international options. It’s funny to think that it’s a western culture to be vegan. Though these vegan restaurants are rare and further from my dorm than I would like, it has allowed me to travel with friends and experience different cities. Itewan has become one of my favorite places! I will have to look into it on why, but there is a huge Turkish population there. I bought my first Turkish delight at a cute Turkish bakery. Who knew my first purchase at a Turkish bakery would be in Seoul. Overall, my search is still continuing, but it’s become easier. 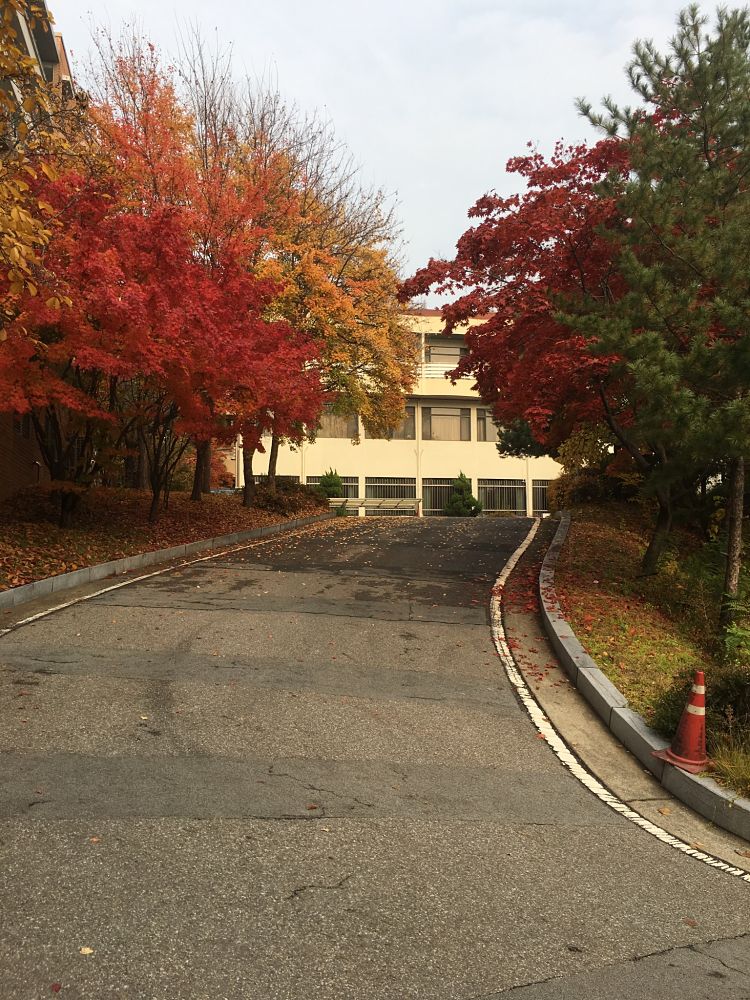 Fall is my favorite season and I couldn’t be happier with the change of leaves here!

For anyone who has been thinking of visiting or studying in Korea, but is a vegan, I am not saying it’s impossible. I would admit it is more difficult than maybe places like France or Germany, but it is possible. The country itself will make up for the different lifestyle changes you have to make. Wish me luck on my vegan journey! 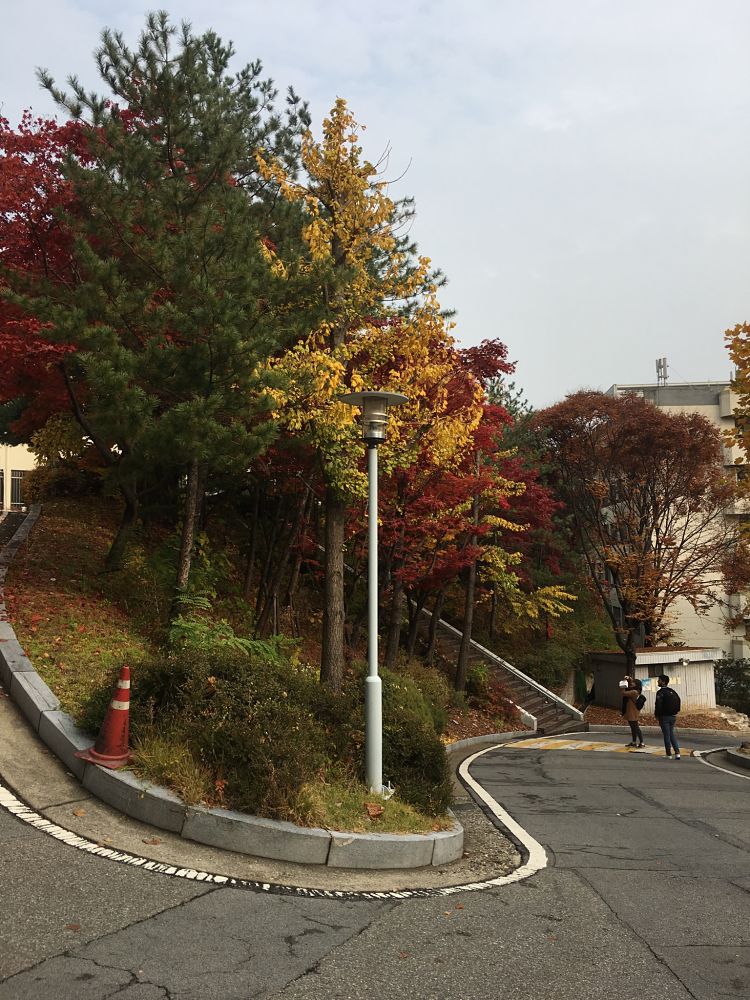 I’ve seen more variety of color and sizes of leaves here than I have my whole life.