I was sitting with my friend Keli at one of our favorite campus restaurants, when we stopped talking and started people-watching.  I would like to say I’ve creeped out many people by staring at them, but most of them are just on their phones distracted. That is my point of this blog: human interaction. Going back to my friend Keli and I, we both turned to each other and went on a whole rant about how much we miss talking to strangers.  I don’t know if it is just us, but we found ourselves in multiple situations back in the states where we would strike up conversations with complete strangers. Maybe it was at a shopping mall, or in line at Trader Joe’s,  making a joke or a comment to the person near you. 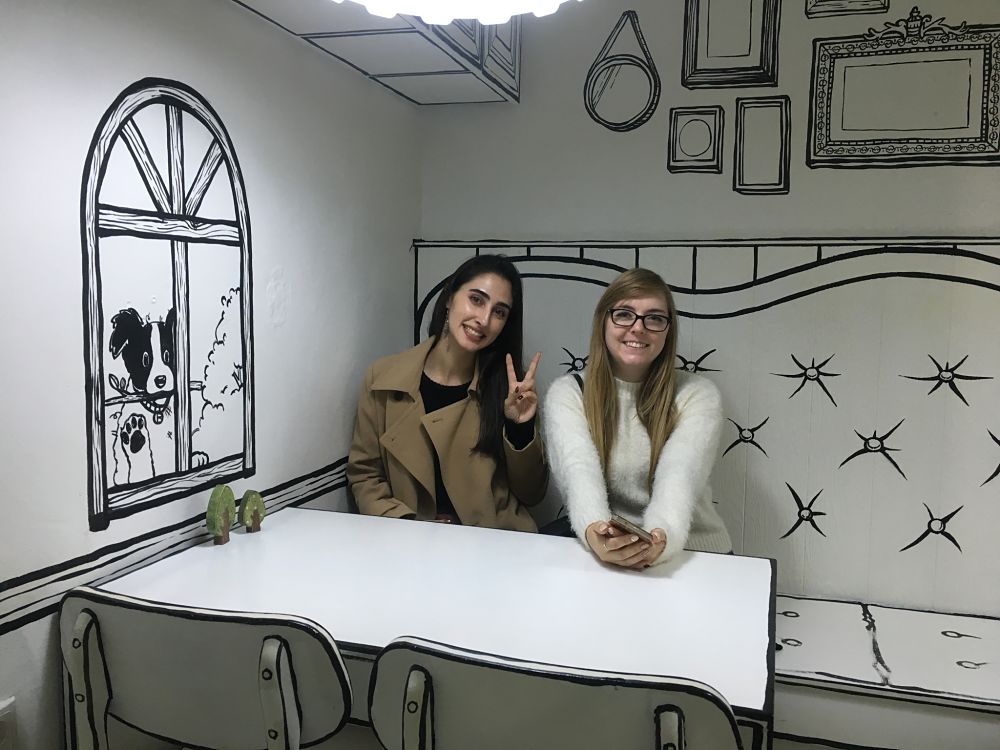 A couple of my friends, Jordan and Alyssa, at a popular cafe named CAFE 연남동. 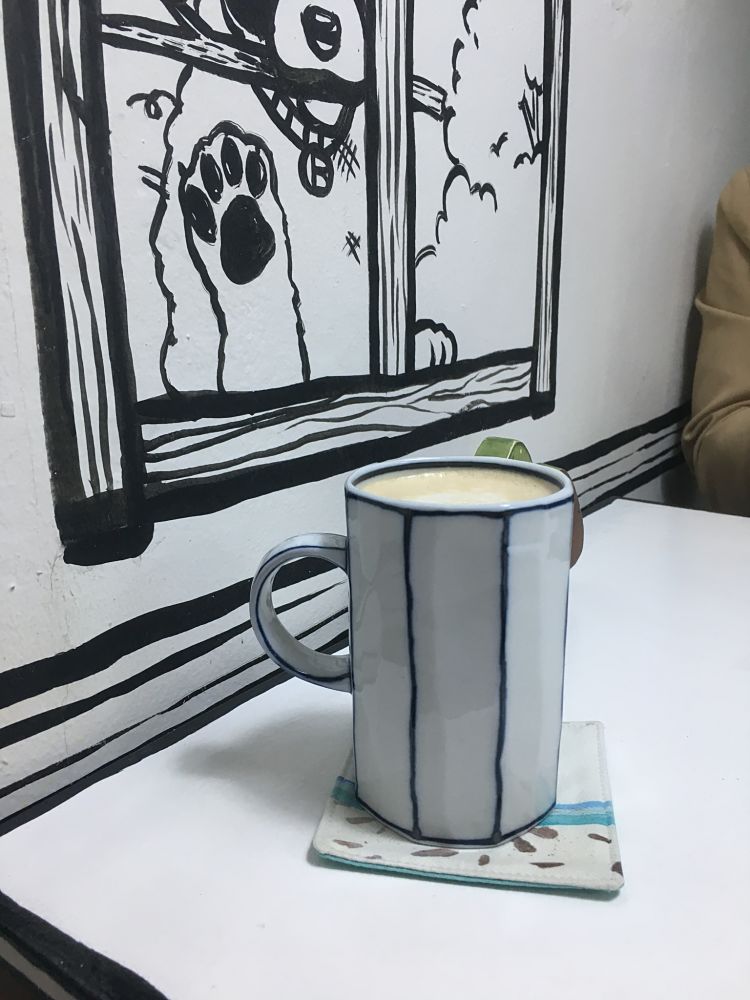 The small cafe was made to look like a drawing. It was super cute and delicious, but only has two tables so you had to drink fast due to the long line waiting their turn.

Though many complain that people have become attached to their phones and have become less aware of their surroundings, I would say it definitely more common and obvious here in Korea. Keli and I first discussed the server-customer relationship. In the states, most sit-down restaurants assign a particular waiter to your table. Here in Korea, you don’t get one waiter for your table; the servers usually walk around waiting to be called. Though I’m unsure if this difference is the reason why, but here in Korea, the customers and servers don’t interact as much. In the States, it’s seen as rude to ignore the servers. When I’m at a restaurant back home with friends or family, we generally feel the need to have conversation with our personal waiter. The most interaction I’ve witnessed between a server and a customer here is saying thank you went the food arrives; and that is rare. At first, I assumed it was because I was a foreigner, but now I know it’s normal. It’s strange to think that just because you don’t have personal service, the culture of talking to the workers doesn’t really happen. I wouldn’t say  people  are more rude here. Instead, the way service is organized here prevents a more personal interaction.

The TEAN program I am a part of went to a cooking class at the Food & Culture Korea Academy. We were taught to make the popular meal, Bibimbap. It consists of rice, colorful vegetables, and a fried egg.

Keli and I then got on the topic of how much we missed interacting with both workers and customers while out shopping. It may seem strange to miss, making random conversation with strangers, but I do. Most transactions we make at the register are at a grocery store or a store. When in line, I feel this urge to say something to the others in the long line, or have small talk with the register worker. Everyone is so kind and accommodating, but it is still frustrating to lack the ability to start a conversation. To be honest, when I moved to Virginia to Marymount University, I met my first couple of friends at the Tyson’s Corner mall. One was at a Barnes and Noble, the other at a Sephora. I have never been shy to strike up conversations with whomever. I have had many exchanges with Koreans on the streets, generally because they are curious of where I am from; I wish I were able in return make further conversation with them in Korean.

This meal was served to the Kings a long time ago and was meant to look colorful. Many celebrities have attended this company, such as Martha Stewart, and Jimin from the Korean boy group BTS. It was super fun and delicious!

In response, I have been practicing my Korean extra hard lately. Even with the little Korean I know, I have tried my best. I feel guilty that most of my conversations have to happen in English. I have come across multiple Koreans trying to talk to me in Korean and I have to just respond “몰라요”, which means “I don’t know”. Ive mentioned my frustration with many KUBAS, but they don’t understand why I would want to learn their language, when English is the universal one. Hopefully the more my Korean advances, the more possibilities open for small talk with strangers.