The big Korea Vs. Yonsei University rivalry games finally arrived! These games are known to be one of the only huge college rivalries in the country. The games consist of five sports: football (soccer), rugby, baseball, basketball, and ice hockey. The games took place on the fifth and sixth of October. The games are not part of the regular season schedule, it’s just a traditional weekend of competitive and fun games. Not only do current students participate cheering on their school, but all alumni come with their families to join in the tradition. The winner of the entire competition weekend is determined by combining the loses and wins of each game. Though an overall winner is selected, what’s most important is to have a light hearted fun weekend with friends supporting your school. 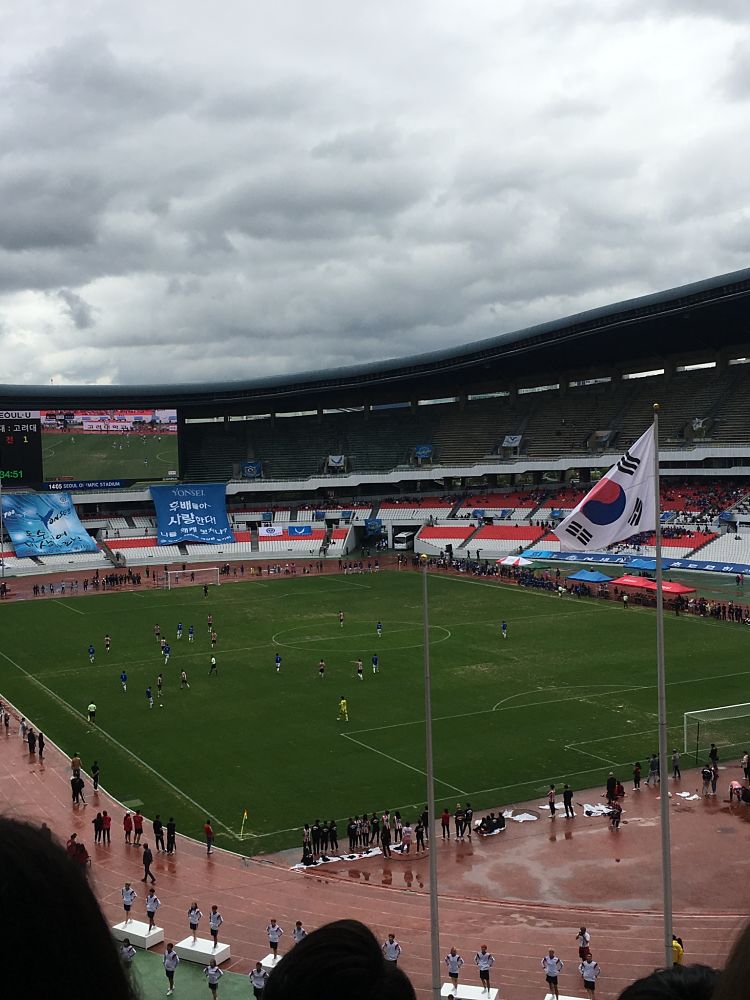 I wanted to get a photo of the football game while the Korean flag was blowing beautifully in the wind.

As a super competitive person when it comes to watching sports, I was so excited that the games were finally here. I was both looking forward and dreading doing the learned cheers I previously wrote about. I wasn’t sure what to expect when I arrived at the stadiums, but if I learned anything from the month I’ve spent here, the school pride is beyond anything imaginable. For the baseball and football (soccer) matches, you didn’t need to get a ticket to attend. For the other games, a ticket was required, and, sadly, I couldn’t acquire them. The first sport was baseball on Friday. I woke up to heavy rainfall. Without any expectation of it being cancelled, I journeyed my way to the Olympic Stadium Sports Complex. Though I love the rain, this rain put a damper on the day and the journey to the games. Once we arrived, it was announced that the game would be delayed due to the rain. For about an hour, we just continued to do our cheers. I was honestly impressed with the cheer team, they didn’t waiver in spirit the whole time. Around an hour and a half upon arrival, it was then announced the games were cancelled. I was honestly a mix of both dread and happiness. I was happy I’d be able to get out of the rain, and out of my soaked tennis; but also upset because I love baseball and was genuinely looking forward to it the most. The positive thing was that they provided lunch and snacks, that made up for it a bit. 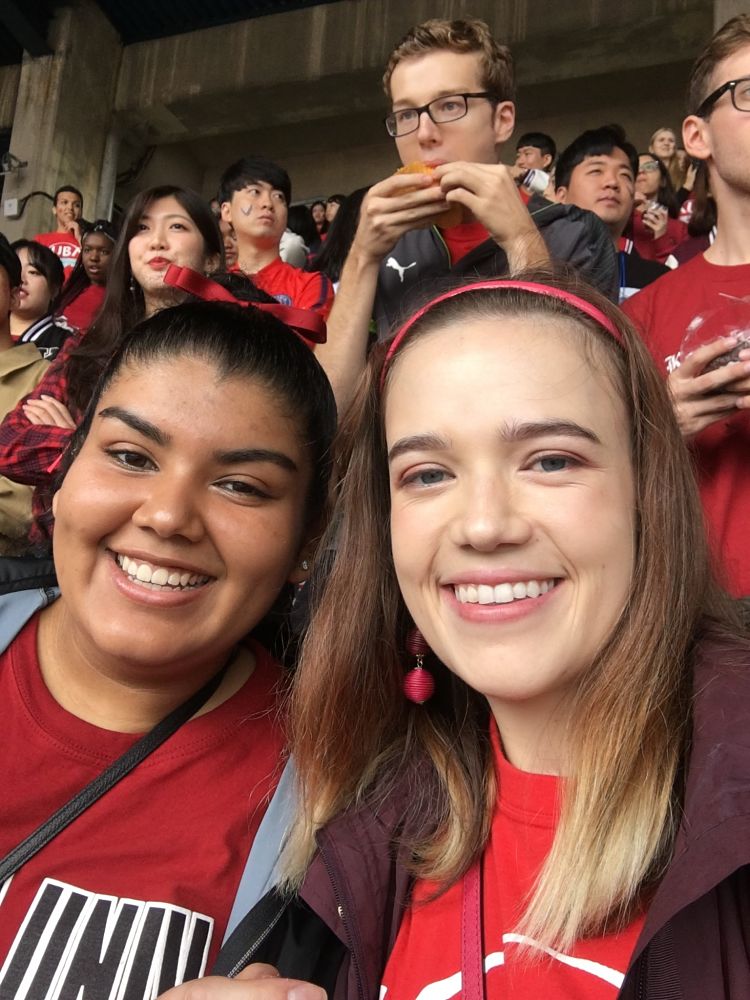 My friend Stephanie and I at the football game. This photo was taken while Korea University was winning.

The next day was Soccer. To be honest I am not a huge soccer fan; but like I said, I am competitive in any sport I watch, especially if I have a team to cheer for. It was drizzling on our way there, but cleared up fast upon arrival and was legit a beautiful day. The stadium was completely full and you could feel the KU energy! I couldn’t wait! Once the game began, most students couldn’t follow each cheer all the way through; the game was too intense. I personally almost fell over the edge three times because I was too into the game. I was happy it wasn’t forced upon us to be consistently doing the cheers 24/7. I’m that person who usually freezes and intensely watches. KU scored a goal in legit the first five minutes of the game, but it was sort of downhill from there. The game was still close the whole time, but after the second half started, we barely got the ball on Yonsei’s side. We had fine defense but lacked offense. I was consistently on the edge of the seat covering my eyes. It was a fun-spirited game for the full ninety minutes. After the final, we had lost 1-2; Yonsei cheered, but to my surprise there was no sore winners or losers. Both teams continued to just cheer on and have great spirits. 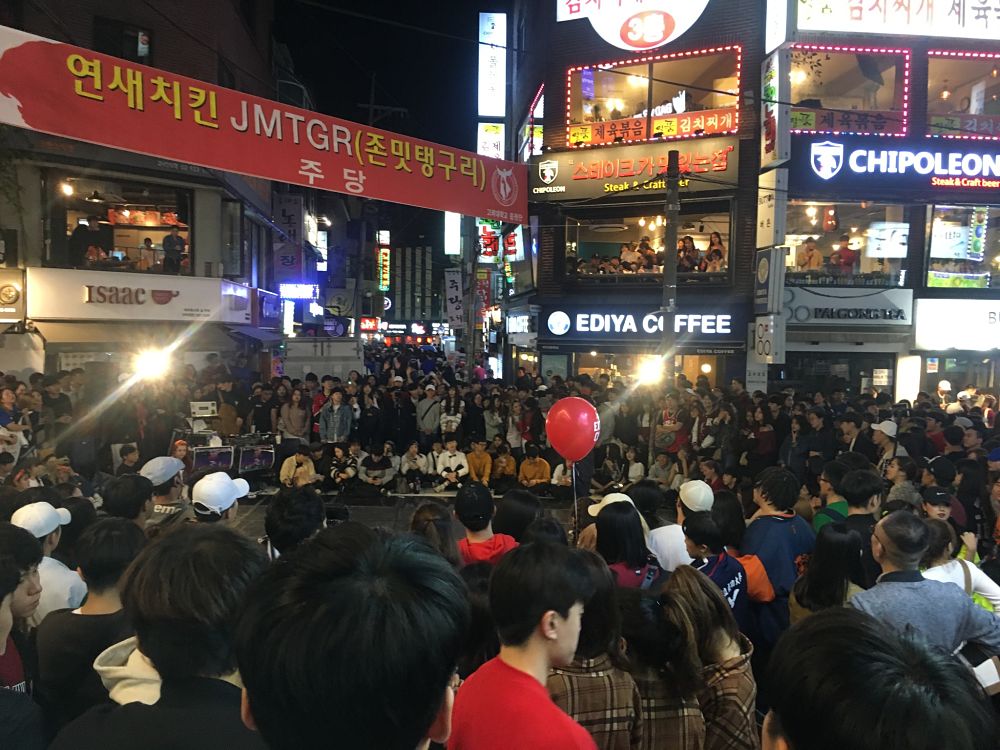 This picture is only a small glimpse of how crowded the streets of Anam were for the after party!

The annual street party started at seven that Saturday evening. I was told beforehand that each year the party switched between Anam (KU’s town) and Yonsei’s location. Both Korea and Yonsei university students gathered in the blocked off streets of Anam to watch live dancing groups, join in the cheers, and eat with the alumni. There is a strange, but cool tradition that started about twenty years ago. The alumni of different classes will buy out certain restaurants near campus (where the party is held), and students get in human trains to ask for free food at these specific restaurants. If the alum is impressed by the way you ask, they will give your group free food. It’s such a random tradition to me but it really shows the bond the alum and currents students try to keep up. 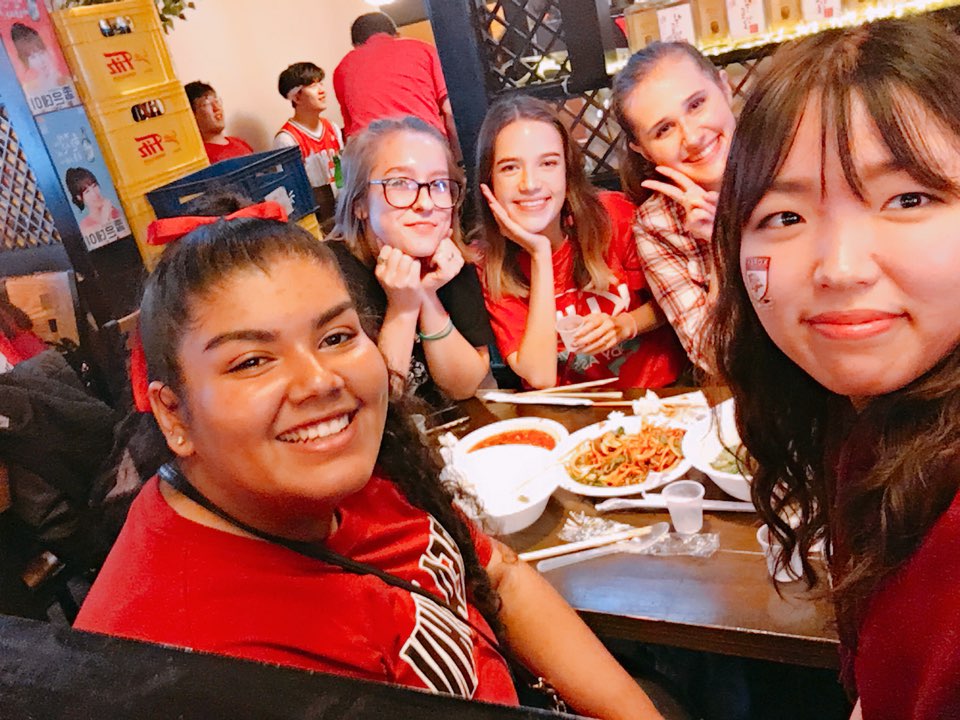 Some of my friends and I at one of the restaurants the Alumni gave us free food! Many of the alumni sat down with us and we had great conversation! They were all so welcoming.

Overall, the weekend was by far one of my favorite here in Korea! It made me feel more a part of the school as a legit student. Though I’m only here for a semester I truly feel like this is my second home university.