Having been interested in Korean culture way before I decided to study here, I had noticed how much Koreans love going and staying out late with their peers. What I now have been trying to comprehend is just how much they do go out. For anyone who doesn’t have any knowledge of Korea at all, let me inform you that Koreans go out no matter the day, or the hour. I don’t exactly know what influenced this cultural aspect of Seoul, but I believe the layout of the city definitely helps. Seoul is made up of roads going in every which direction, while all the buildings are stacked up going up and down these roads. Due to the lack of available land, street shops and restaurants run one after another down the streets. The area by Korea University is no exception.

This photo was taken in the town of Dongdemun in Seoul. I came across this little man-made river as I was walking to the movie theater. I couldn’t help but stop and watch the father help his daughter cross the rocks. I don’t know the name of this area. But I plan to go back.

Korea University is located in the town Anam; there are multiple long roads lined up and down with shops, cafes, and restaurants. Throughout the day, there are students consistently hanging out in the variety of buildings and walking around. When I first arrived in Anam, not many students had moved in yet so it was pretty empty for the first couple days. Once everyone moved in though, Anam transformed into a lively town that literally never sleeps. Both students and locals were out all night; when I say all night, I mean until about 2-4am! I told myself it was because it was still summer and they wanted to get out of it as much as they could before school started. I was surprised that these restaurants were even open until then. Unless it’s a bar, most restaurants and cafes close no later than ten in America.

Here is the streets of Anam, where Korea University is located. Here you can see the multiple shops and restaurants along the roads.

School had finally started, so like anyone, I expected the streets to be dead by ten o clock. Boy! Was I wrong! Starting my second week, syllabus days were over and lessons had officially begun. On Monday night of the second week, I was sitting up in Gong-cha, a bubble tea cafe. I was reading some of my assigned articles at the window seat observing the streets. As time neared around ten-thirty, I saw groups of students sit at a restaurant table; they then ordered some food and drinks. Call me an old lady if you want, but the first thought that went through my head was “Don’t you have class tomorrow? Shouldn’t you either be doing some studying or sleeping?” I don’t know if I just had no life at Marymount, but I wasn’t just starting my night at ten-thirty on a Monday.

Students aren’t the only ones who stay out all night (because that isn’t very convincing to show the night life of Korea, since college students don’t always make the most rational decisions when it comes to sleep and school work). I more often than not come across many businessmen and women going out all nights of the week. When I say go out at night, I don’t just mean go out till ten or eleven, I mean out till two in the morning. When looking out my dormitory window, I consistently see co-workers out roaming the streets of Anam. I was hesitant to mention it, but generally Koreans are out drinking. I’m not trying to convince you to come to great Korea; I’m just speaking the facts. I think what surprises me the most is not only are these grown businessmen and women are out very late, but they are out drinking on a work night. 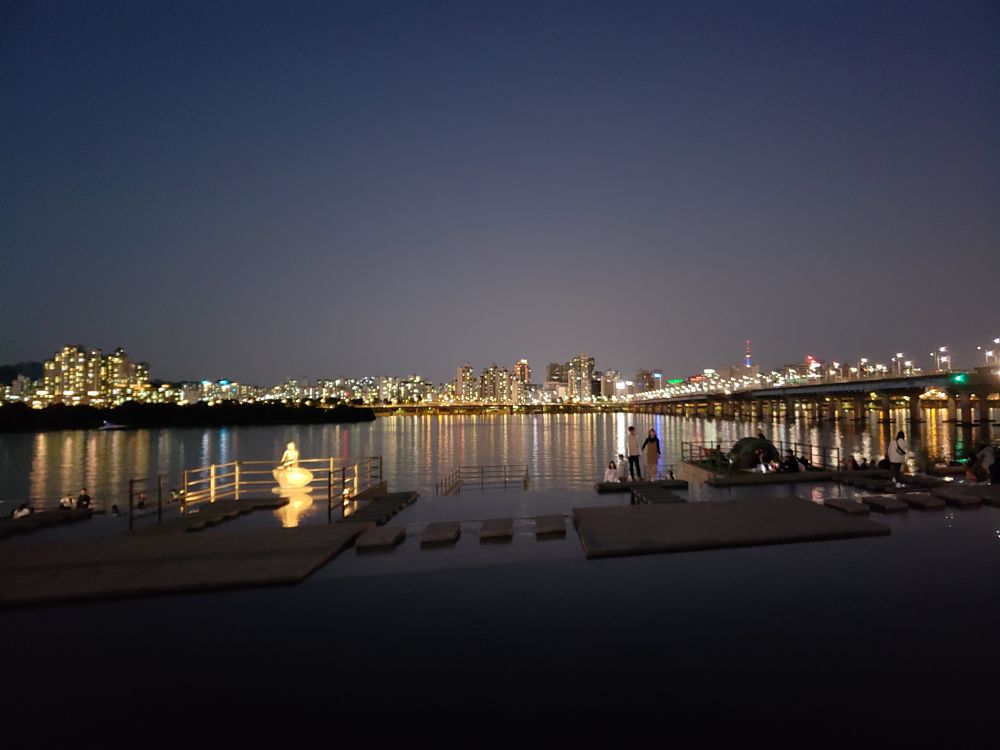 This is Han River, a major river in South Korea. My KUBA group and I went to have a picnic by the river. A picnic at the river is a very popular day out in Seoul.

The night life is real here. I tried to keep up, but I’ve decided I’m only here for four months and I don’t want to adopt too bad of habits (hehe). I do love to take advantage of cafes staying open late to grab a coffee and study in a nice environment. Back home, if I needed to stay up studying, my best bet was either the library or my dorm room. Here, if I need to study, but want a comfortable environment, I can find it. Seoul is definitely the place for night time studying. My friends and I will meet at a coffee shop and just work away. 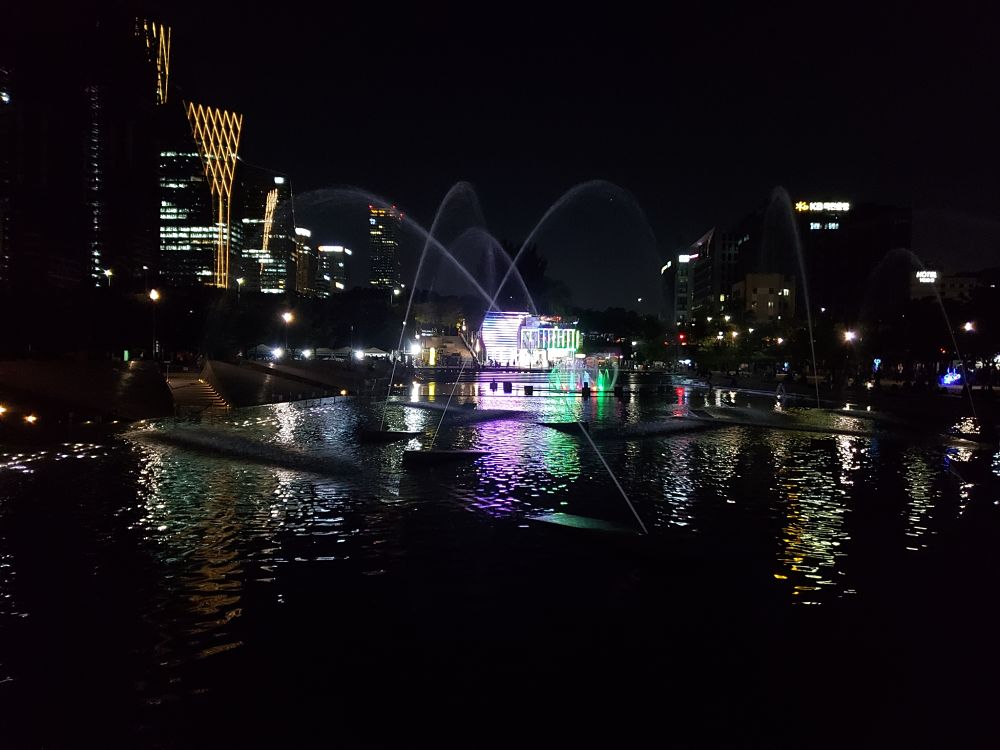 It was so beautiful looking upon the city across the river. At night, the bridge lights up and there are water fountains with colored lights.

The night life fascinates me, and really gives Korea a great feel. Whether you have food cravings late at night or just want to go out for a late-night stroll, Seoul is perfect. My number one complaint of my hometown has always been how early everything closes, but here I can just sit at a coffee shop and read till midnight if I desire. I would recommend Korea for the night owls like myself. Seoul for sure beats New York as the city that never sleeps.