So for most people maybe Myeongdong isn’t the best place to tackle on your first day in a new country where you barely know the language, but for some it may; for me it was. As someone who absolutely loves shopping and has almost made a sport of it had figured that I could do it successfully anywhere. If anyone knows, Myeongdong is a a huge area (maze) filled with everything imaginable. They have clothing, makeup, skincare, health, food, shoe stores etc.

Once my friend and I arrived at the Myeongdong station, we first exchanged our money into Korean won and set on our journey. I have to admit I was completely overwhelmed: I’ve been to New York but this was on a whole different level. We arrived around 3pm and there weren’t too many people that gave us the false impression that since it was a weekday it wouldn’t get any busier than this. After entering the first skincare shop I was greeted and I think it was at that moment that it hit me completely of where I was and how similar and different it was from the States. I became filled with excitement of how this great country has let me come to not just shop but go to school here. It seems weird that these thoughts came after entering a skincare shop, but shopping makes me emotional (hehe).

After I calmed down, we continued on our way going in and out of shops. Now when I say “tackling” in the title of this blog, it’s because before I knew it, Myeongdong became the hardest maze I have ever seen. After crossing the same store about three times, I started to feel I was either in a twilight zone episode or someone was pranking me. What I started to learn is that Seoul uses every alley way, floor, and crevice to place a shop or restaurant; so even once the sun was going down I had only been to about 1/3 of Myeongdong. 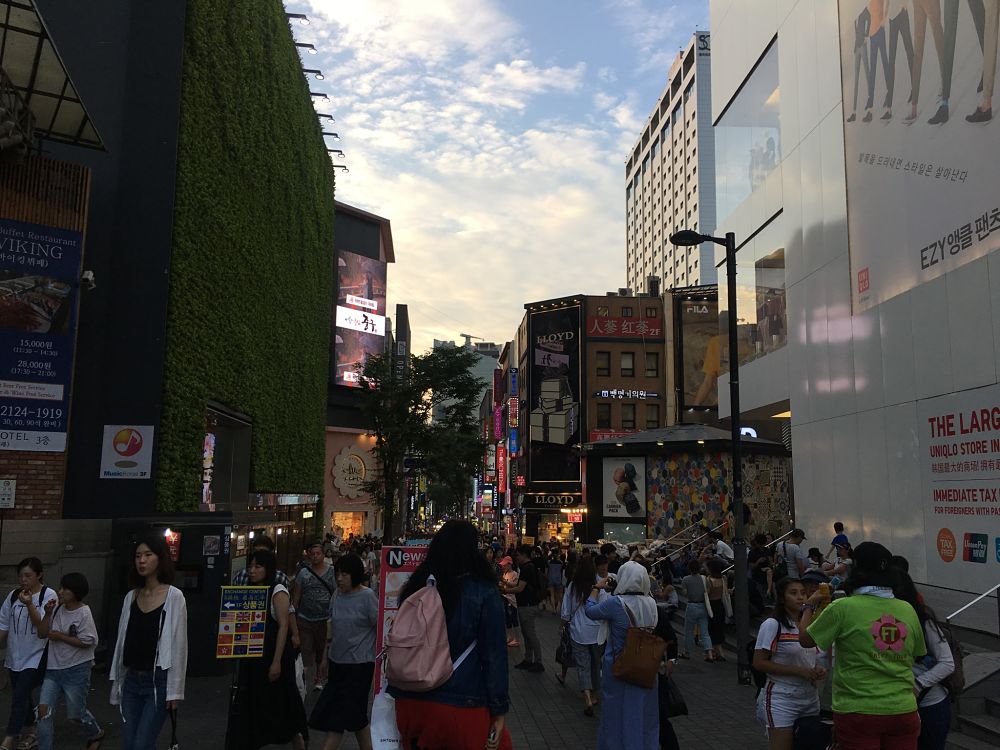 As night falls in Myeongdong, the area comes to life

In the States, we are told or at least advised not to go down dark alleyways between buildings so I brought that mindset to Korea. After spending most of the day dodging all dark alley ways I started to realize that in order to actually get to every part of Myeongdong it was needed. I know most of you guys are still questioning my intelligence by telling you guys it’s completely normal to walk through the alleys to find more shops and more people, it’s completely understandable.

It wasn’t until my stomach growled and we started to search for some food that I entered my first alley way. After passing by multiple restaurants, we finally came across one that looked more than delicious. The restaurant was located between the sides of two clothing stores and was only seen by the sign light. My friend and I looked at each other and braced the danger that we assumed would present itself as we walked down. Surprisingly we just came across crowds of people around our age just walking down it and entering the shops along the path. I was shook: it was just another street! We ate the delicious 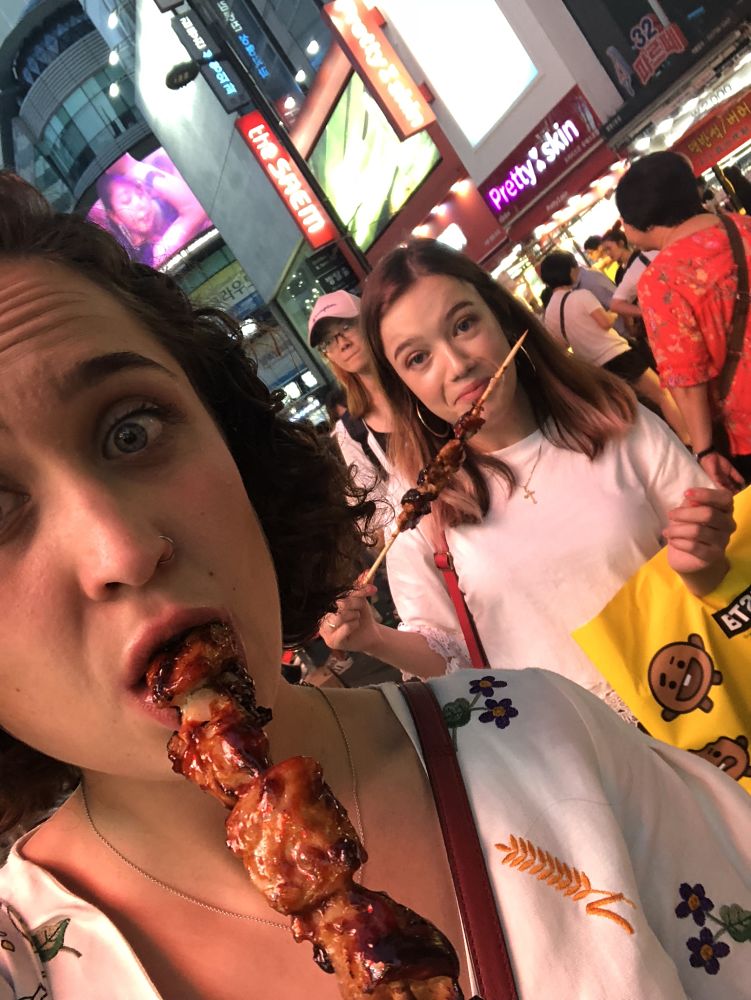 and then headed back. We started to realize that everyone was going in and out of the different alleyways to the different shops which still after a few days still confuses me. I’m usually the person who walks down dark alleys knowing that it may be dangerous but doing it anyway, but here everyone does it without the fear of danger.

Around 7pm, the place became extremely crowded! Myeongdong was filled with tourists from all places and locals just wanting to shop and eat. Street food carts filled the streets and alleys. Obviously wanting to eat everything offered I followed the path of carts along the streets and alleyways, because nothing can get in my way when it comes to the delicious street food. Each cart is brightly lit to show the display of food that brightens the alleyways in a beautiful and fun way. While I write this, I still picture anyone who reads this thinking about how dumb I am to say that the dark alleys are safe and filled with more shops; yes, I may sound like an ignorant tourist who assumes everywhere is safe. I assure you I came in to Korea with every intention of avoiding areas with little light and hidden away, but if you were only here with me you would understand.

The reason why I focus on these dark alleys is because I am a lover of the thrill and so anyone who knows me knows I am the first to take the more dangerous path to where I need to go. Considering this I cannot stress it enough that I came to Korea with the intention of leaving that back home and going around with every precaution. It isn’t my fault that here in Seoul that to get around you can safely enter these dark alley ways. I’m ready to tackle more safe dark alley ways throughout my time here in Korea!

PS. I was so busy running around Korea I forgot to write stuff down in my journal, so next time I hope to present everyone with a deeper blog about my thoughts and feelings in the future.