One of the main themes I have noticed while being here in Iceland is the immense trust among all people. The low crime rate and genuine integrity is something all Icelandic people are very proud of. While studying sustainable leadership here at Bifrost, the topic is something that comes up a lot in conversation. With this being said, I put my trust into the hands of strangers this weekend and the outcome was incredible.

Bifrost is located in a very isolated area. The campus is surrounded by miles of lava fields and the closest town is about 30 miles away. It is safe to say that this experience is a lot different from my experience in Rome last fall. I would even go as far as saying these experiences are complete opposites. Being the environmental nerd that I am, I am absolutely loving the tranquil environment and breathtaking vistas. But after two weeks in Bifrost, my two friends and I decided it was time to make our way to the closest city to experience the Icelandic city life.

My friend, Rose, and I as Vikings

Reykjavik, the biggest city in Iceland, is about 60 miles from Bifrost’s campus.  Our options for getting from point A to point B were slim. We could either take the bus that ran only once that day and cost 3.000 ISK one way, approximately $30, or we could hitch hike. Being the broke college students we are, as well as being in Iceland with its crazy high cost of living, we decided that hitch hiking was the most economic option for us. One of my friends, Lena, told us that she had hitch hiked before and it isn’t as dangerous as the horror films would like you to believe. I have to say I was skeptical and a little nervous, but I thought to myself, “Ya know, this would make for a really good story”. 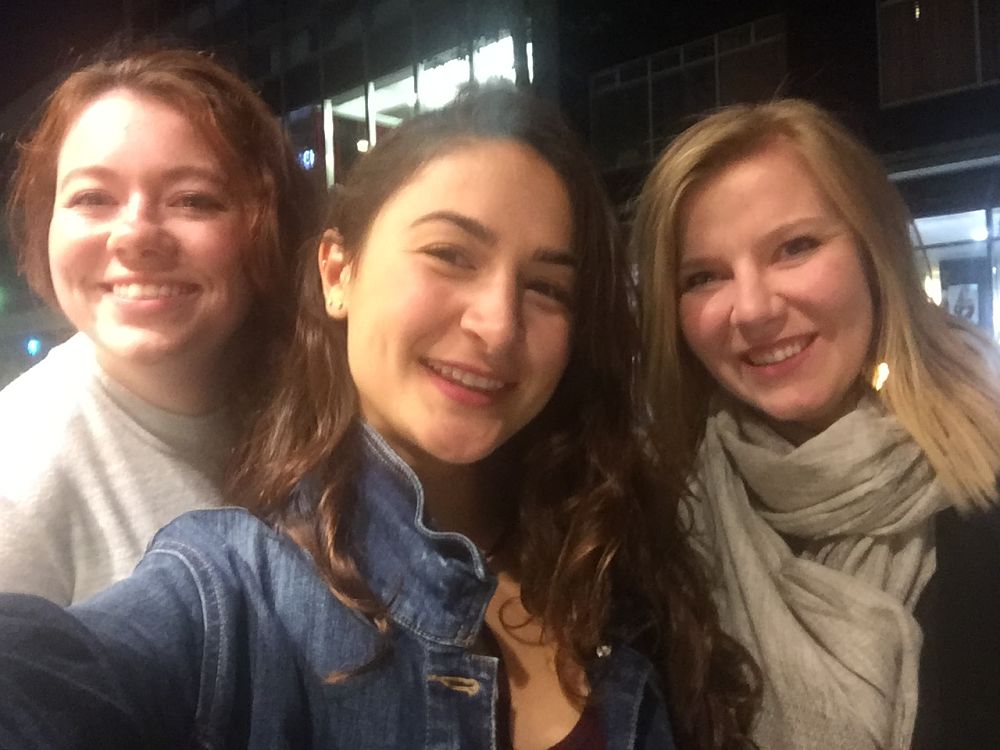 Rose, me, and Lena enjoying Reykjavik, 60 miles from Bifrost

After discussing our decision to hitch hike with one of our advisors at Bifrost, he re-assured us that this was something very typical in Iceland. He explained that Iceland is full of backpackers who are looking for rides, and he never hesitates to pick up someone on the side of the road. This ties back together with that Icelandic culture I was talking about before. There is so much trust that all members of the community will do the right thing. At this point, it was clear to me that we would be safe as long as we used our common sense and listened to our intuition.

So, there we were, standing on the side of a main road in Bifrost trying to hitch a ride to Reykjavik, 60 miles away. We walked the side of the road with our thumbs up smiling and waving at the passing cars. We were giddy with giggles from the excitement. Although it was 8 o’clock at night, the midnight sun hung in the sky at a point that made it feel more like 4 o’clock. 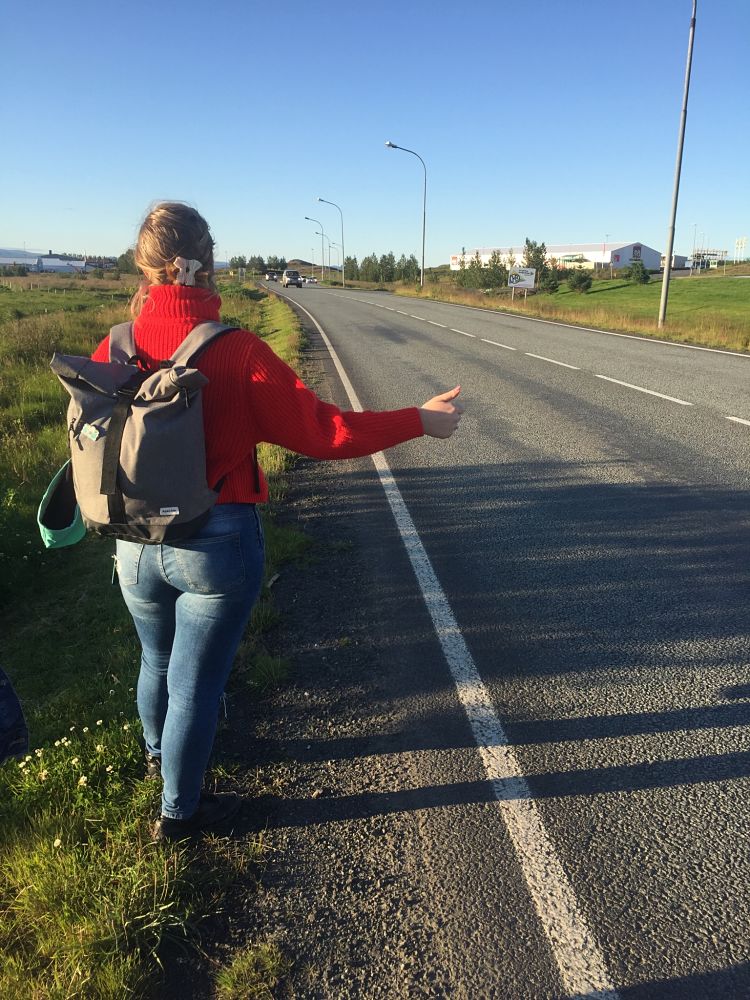 It only took about 20 minutes before someone pulled over. A young man with a little puppy in the passenger seat! We were ecstatic. Our intuition was good and we felt safe. We asked him where he was heading and he said that Reykjavik was on the way and he would love to bring us. Without hesitating, he got out of the car to help us with our stuff. He told us his name but I don’t dare to try and pronounce it, all I know is that it ended in Thor. So, we called him Thor. He was a local, about 25 and driving home from his parent’s new house. His dog that was decked out in all pink was named Arya. She was named Arya after Arya Stark from Game of Thrones! After he told us that, the conversation took off and it didn’t stop until he dropped us off in downtown Reykjavik. We thanked him graciously and with a smile and wave we wished us well and left. 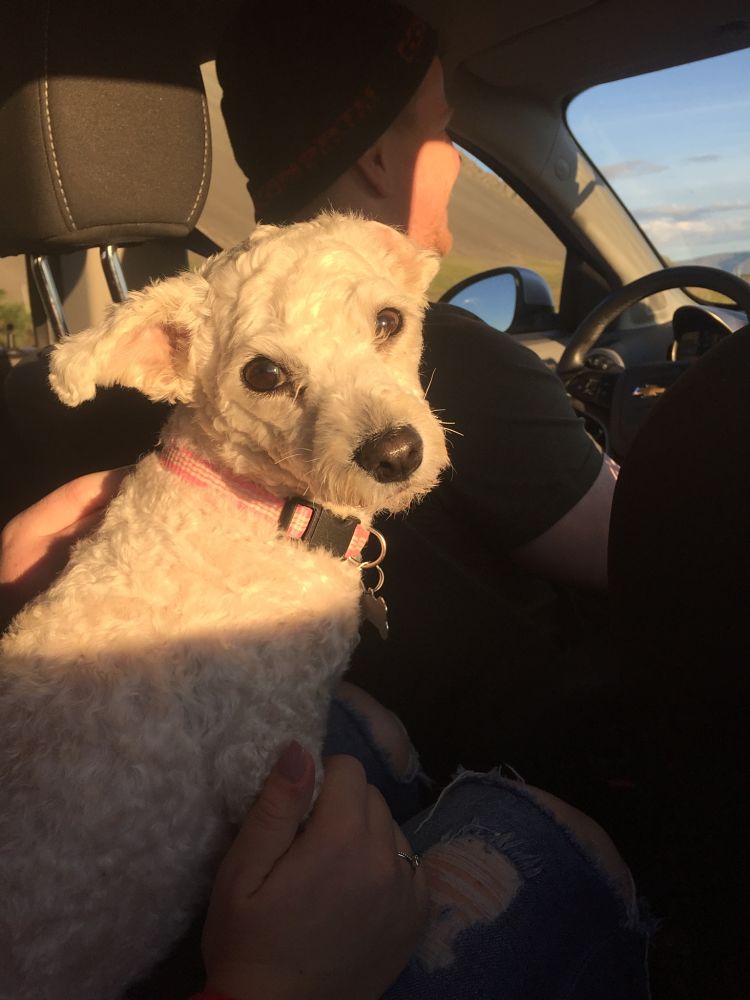 From there we spent our night in Reykjavik exploring bars and restaurants. The next morning, we got breakfast and explored the city some more. Before we knew it, it was time to head back to Bifrost. Instead of trying to hitch a ride from the middle of the city, we decided to take a bus to bring us closer to the highway. To our surprise, it was actually harder to find a ride on a busy road. 30 minutes in we decided we needed to be creative. We walked to the nearby gas station and made a sign that said Bifrost in big letters. All together, it took about an hour until our next driver picked us up. His name was Thomas and he was from Hungary. He told us that he had been living in Iceland for a few years now. He explained to us that when he first got to Iceland he didn’t have a car and he traveled on foot and by hitch hiking. He explained that now that he has a car, he enjoys helping other travelers.

Lena, Rose, and me relaxing in Reykjavik

Hitch hiking back to Bifrost

This experience really opened my eyes. It made me realize that there is an unspoken kindness in most people. It is easy for us to ignore those in need, but amazing things can happen when you help a stranger. This experience has inspired me to help others and open my heart to stranger, because at the end of the day we are not all that different. I am not saying that hitch hiking is always the best way to travel. It is important to always act smart and keep yourself in safe when traveling. But under these circumstances, with the prior knowledge that this is a common thing in Iceland, I felt safe trusting the kindness of strangers.