The drought is over. The real Irish summer has arrived. It’s unlike any season I’ve ever experienced. The skies have a habit of going from blue to gray just to dump buckets of rain and freezing winds on you during the walk from your bus-stop to office, and then becoming clear and sunny again right as you step in the door. True story. But it only took me a few days to get used to being cold and appreciating any time that I wasn’t, and I’ve even started appreciating the grand unpredictability of it all. I am no longer a person who lets a little downpour stop her from going out and living life, because the odds are that the rain won’t last long anyways. 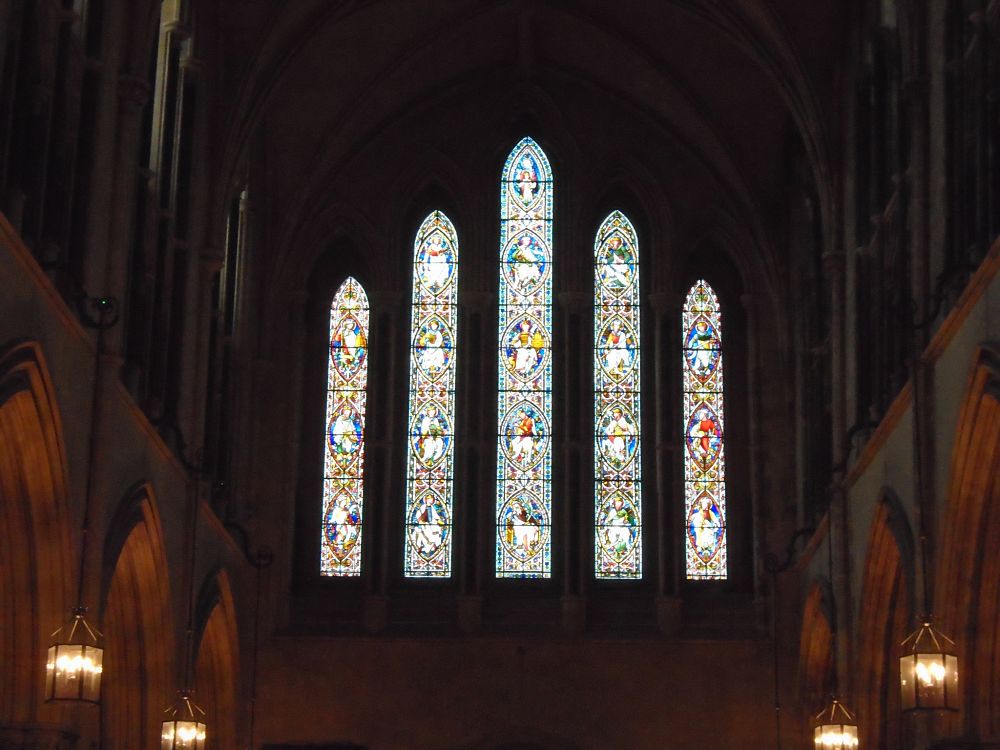 The beautiful stained glass windows in Christ Church Cathedral, where my visiting friends and I took refuge from an afternoon downpour.

However, this weather change did cause me to catch a bad cold, so the past week has been pretty uneventful and low-energy. I did have an old friend pass through Dublin on Sunday and had a wonderful time showing her around the city that is now one of my homes-away-from-home. Walking about in the rain on my day with her, even while being “great craic” as the locals say, made my cold even worse, so I took one day off from my internship for some much needed rest. I am now a week and a half from the end of my internship with Respond Housing Association, and I’ve realized that I’ve written about anything under the sun (or rain) in my weekly posts this summer, but have yet to fill in any details about the main reason I’m here! 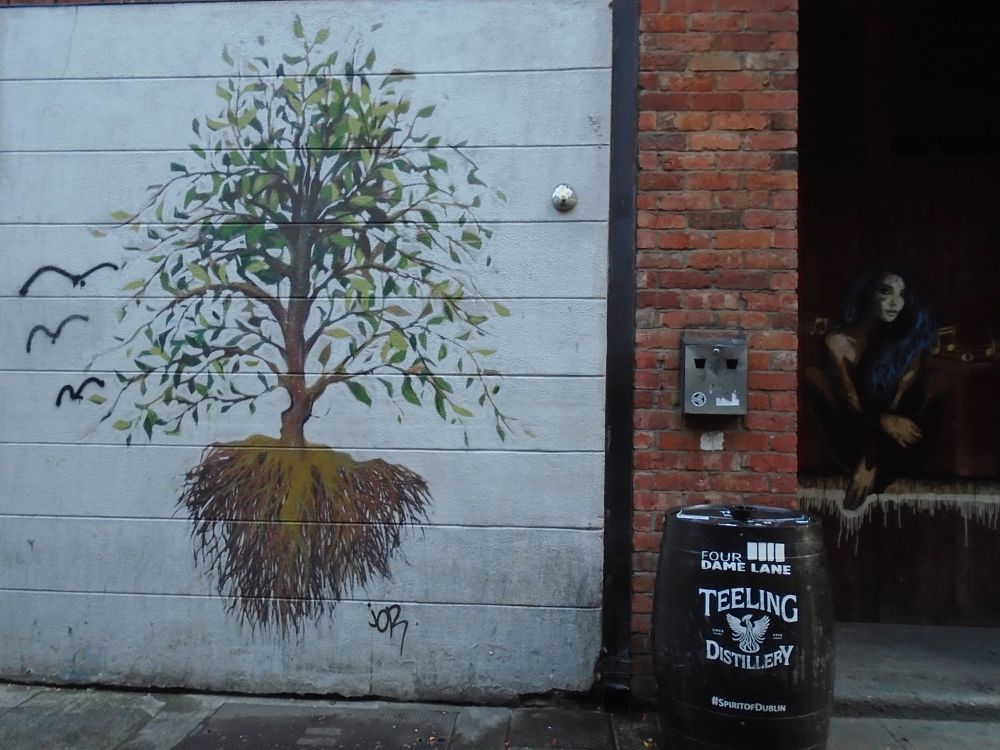 Some street art near Dame Street; the street art all over Dublin is one of my favorite things about the city.

Before coming to Ireland this summer, I also spent a previous semester studying abroad, and ever since then I’ve taken every opportunity to promote the experience; whenever it comes up in conversation I’ll tell my friends “Do it!! If you can, do a semester abroad!” And now I must say I’ll encourage an internship abroad just as strongly, perhaps more so. Now that I’m at the point where I can reflect back on these weeks, I can see that I’ve learned so much at this internship, in such a different way than I would’ve if I’d chosen to work somewhere close to home. Working for an organization in a completely different country, you’re able to better focus in on what you need to learn for the job: namely, what are your organization’s goals, what purpose does it serve, and in what area? And especially, how can you contribute? 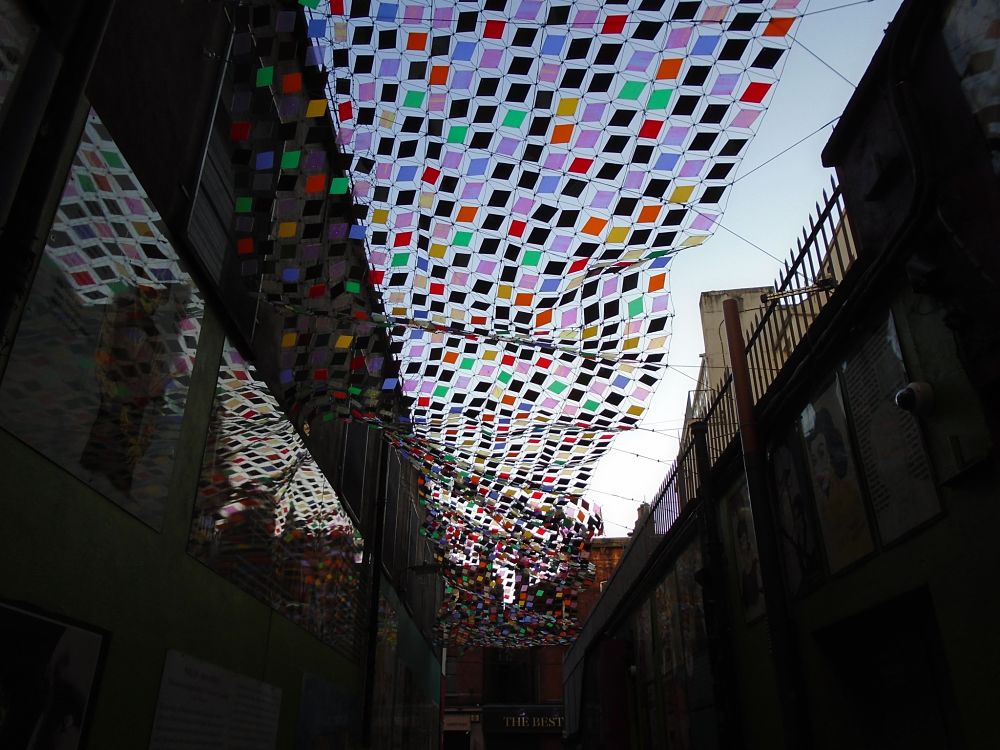 This alley in Temple Bar area is called the “Irish Culture Walk”, and along with this gorgeous hanging mosaic, the alley is lined on either side with tributes to Irish cultural icons, Irish sports, and Irish history. It was incredible to read about the reasons for this alley being built, one of which being that, the country being a fairly young independent state, Irish cultural identity is still being continuously formed. The walkway invites newcomers to learn about Irish culture and become a part of it.

In my case, Respond is a nonprofit that addresses the social problem of Ireland’s housing crisis and subsequent homelessness crisis. There is a serious lack of affordable housing in Ireland – just to let you know how serious, the average percentage of a person’s income that goes to rent every month is 40%, and in Dublin that number can be as high as 55%. When middle and lower-middle income families are struggling to make ends meet in the private rental sector, that means that the low-income and most vulnerable are going to need support from elsewhere. That’s where the government has a duty to its citizens (under the UDHR adequate housing is a human right). In Ireland, a public-private cooperation between local governments and nonprofit organizations has developed in an effort to develop an adequate supply of social housing as well as respond to the dramatic increase in homelessness by providing emergency temporary accommodation. So far, things could be going better, and that’s why it’s really beneficial for me to be working in the Dublin office of a nationwide housing association, because I get to see the organization’s interactions with its government at a crucial time. There are many homeless advocates pushing for reform in the way emergency accommodation is run, there are many ideas for revolutionizing the provision of social housing, there are many people calling on the government to “build more houses!” Yet there are also some very cynical attitudes as to whether the crisis is solvable, and the government has many times been criticized for its lack of urgency on urgent matters such as how many people there are rough sleeping every night in Dublin.

Part of what Respond does is to build more social houses, but Respond also provides supported temporary accommodation to homeless families, including what is called the Family Hub at our office here in Dublin. The Hub is not adequate housing but it is supposed to be a very short-term solution for families. Because of the long waiting list for social housing, it often ends up becoming a long-term situation, and it is apparent in the office that both staff and residents of the Family Hub are not content with the way things are. The residents are unhappy with the conditions in which they are living, the staff are unhappy that they don’t have the resources to improve anything, and both problems are out of anyone’s control. Why? Because the larger problem at hand is that not enough government funds are being dolled out to improve the Hubs, and not enough social housing is being built to cause them to be an actual short-term solution. It’s kind of like a “chicken or egg” thing; which problem should be fixed first? But the conclusion is that neither will be. 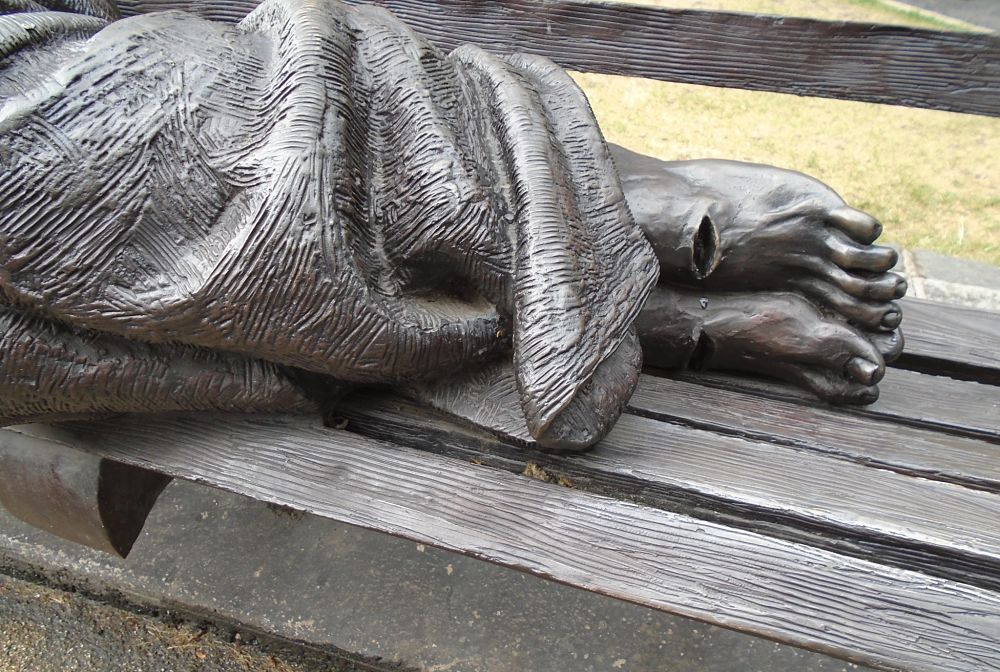 These are the feet of Homeless Jesus, a statue depicted sleeping on a bench outside of Christ Church Cathedral. The statue is wrapped up in a blanket and the only way the person is recognizable as Jesus is by his pierced feet. Sleeping on a bench would be called “rough sleeping” and is unfortunately a common occurrence for many individuals in Ireland, Dublin especially.

I’ve talked to a lot of people who’ve said you can get kind of “burned out” working in the nonprofit sector, whether you’re trying to alleviate poverty/fight for justice/house the homeless/whatever you’re struggling for. They’ve said that day-to-day experiences can be discouraging, you might fail to help someone as much as you want to, and that things might be out of your control more often than not. I’ve really heard this ring true at my internship, but working in the policy office, especially with my awesome supervisor, I see how it’s so important to not get “burned out” because what we’re working for is so much bigger than us as individuals, and so much bigger than just Respond. So instead of worrying about getting burned out by failure, I’ve decided that in this career I’ll probably get rained on a lot, but the sun will shine sometimes too. The rain (and lack of control over it) might be super discouraging at times, but even then I’ll be working for something that’s definitely worth getting rained on for. And even if I never see huge success, there will still be many small victories. 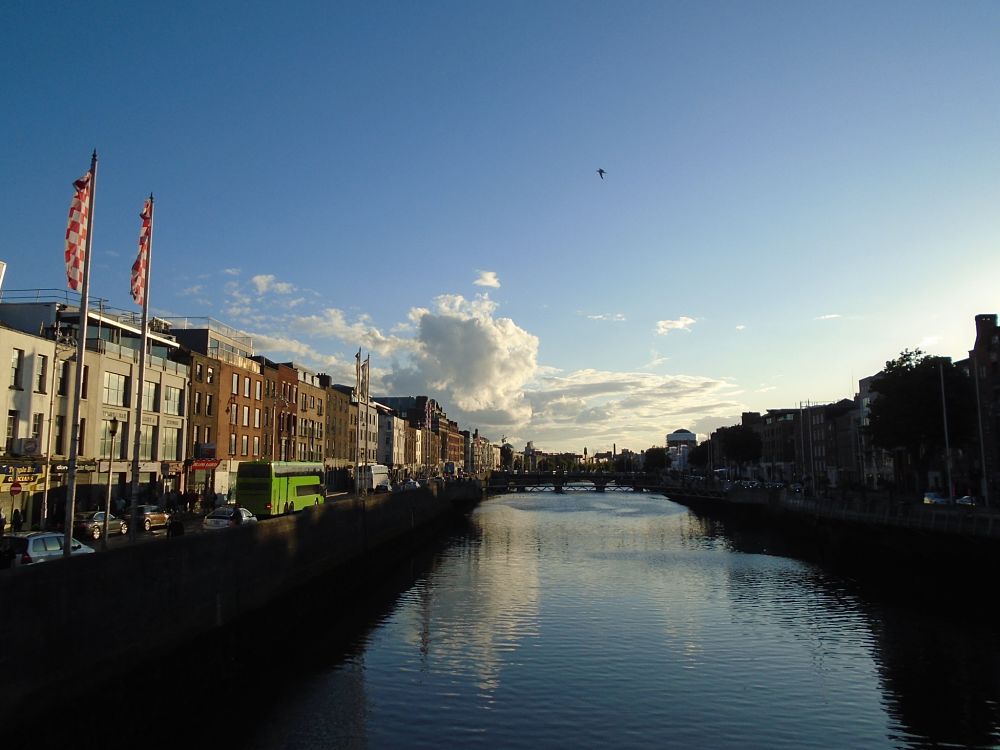 The Liffey from the Ha’Penny Bridge…starting to think of all the things I’ll miss about this city, and this view is definitely one of them.

One of my favorite spots in Dublin is the Ha’Penny Bridge; it’s very picturesque and has a great view of the river Liffey and various pubs along shore. It is also nearly always inhabited by a member of Dublin’s large homeless population, sitting against the railing and greeting passersby. You can’t tell from the photo but I will never forget standing beside a woman not much older than myself, shivering in the wind blowing off the river as I tried to hold my camera still and capture the view. I will never forget the guilty feeling in my heart when I told her “sorry” I didn’t have any change to give her. The memory of what’s behind this view is one of many things about this summer that will cause me to remember the importance of organizations like Respond, anywhere in the world. No matter how hard it is, it is so important that we have these groups making an effort to push towards a more just system and to improve the lives of those who have fallen through its cracks. I am so excited to devote the rest of my life to these same efforts, come rain or shine.

2 thoughts on “Rain or Shine”