I’ve been feeling really homesick the past few weeks. Sometimes this happens while you’re abroad, people will tell you, but I never thought it would happen to me…I love traveling! However, I found myself getting more and more tired of things and people here, and more and more impatient for things and people that I’m looking forward to when I return home. This past weekend, however, totally lifted my spirits with a trip up to Northern Ireland along with the fifty other interns in my program. We climbed across a rope bridge, took in some beautiful views at Giant’s Causeway, pretended to be in the world of Game of Thrones, and explored a whole new city! Belfast, the capital of Northern Ireland, is nothing at all like Dublin. 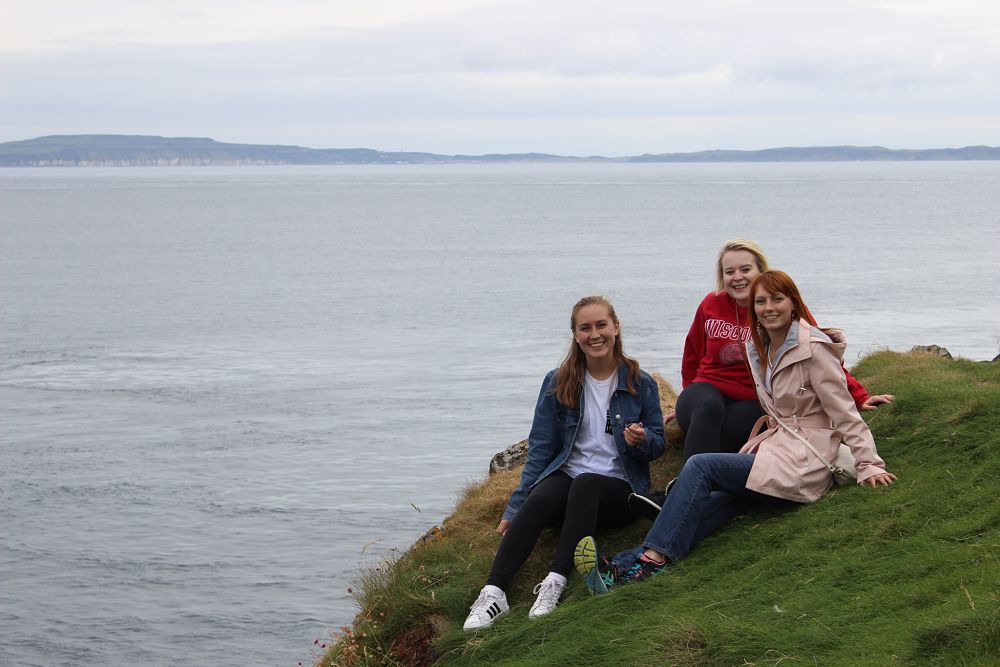 My friends and I enjoying some time in wide open spaces after walking across the Carrick-A-Rede Rope Bridge!

One of the things I love about Dublin, and that I’ve loved since my first day here, is that it is a truly international city. I can get on the bus in the morning and hear Spanish, French, Italian, and about ten other languages that I don’t even recognize. Dublin kind of reminds me of D.C. in this aspect; people live here from all over the world, and it’s exciting that way. Honestly, when I think about how homesick I’m feeling here after only a little over a month, I can’t believe how much worse it must be for anyone who’s actually living internationally, such as all my friends who are international students at Marymount, or more drastically, anyone who ends up leaving their home for another country because they have no other choice. Experiencing homesickness myself has made me even more convinced of how important it is to embrace those who are making a new home across the world. It’s a small world and it’s only getting smaller, and this is something to be celebrated! 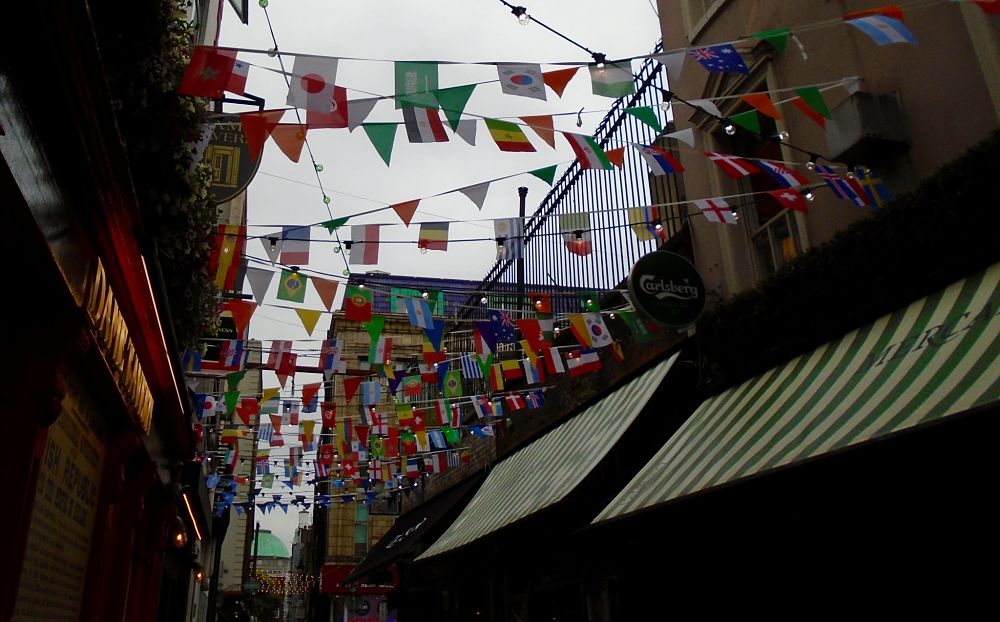 Dame Street decorations celebrating everyone who comes from everywhere to celebrate on Dame Street.

Another reason Dublin is an international city is because of the number of tourists who come here from all over the world, especially now during the summertime. This is exciting and all, but it also makes the city extremely crowded all the time. Belfast, on the other hand, has almost no tourist industry whatsoever, because until very recently the city was in the midst of a violent conflict called The Troubles. In fact, visitors to the whole of Northern Ireland are just now beginning to return. Because of this, while we were exploring the city on a Sunday, the streets were fairly empty, which was a nice break from the hustle and bustle of Dublin. As tourists ourselves, however, we didn’t know what to plan on our itinerary other than the two things Belfast is known for: The Titanic Museum (because the tragic ship was built in Belfast’s port), and a Black Cab tour to learn about The Troubles. 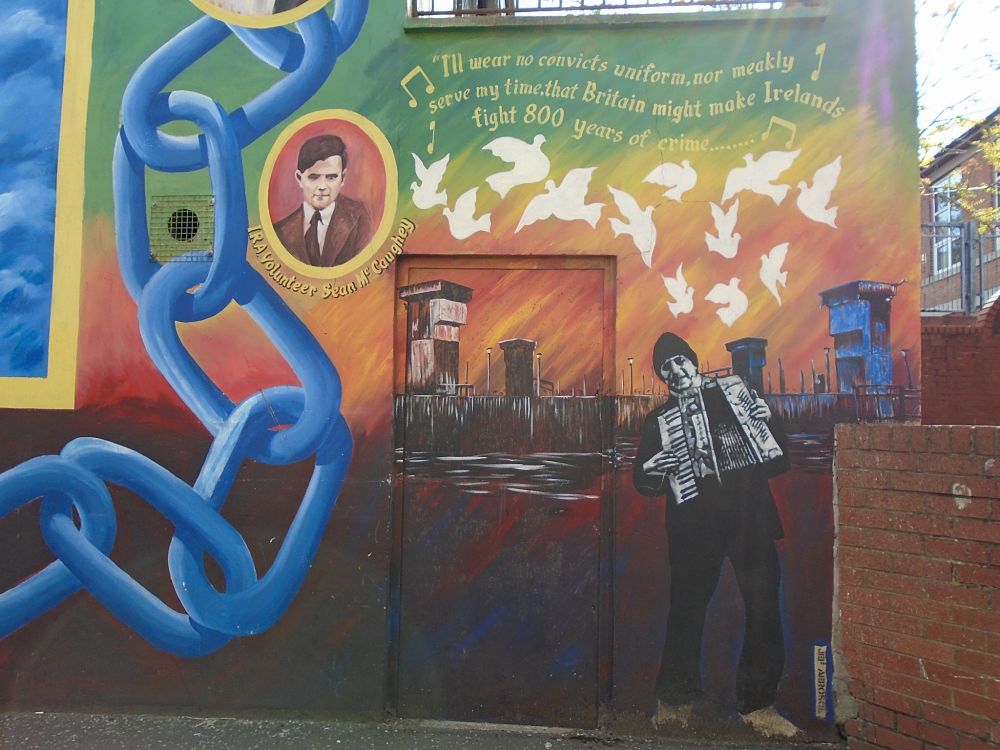 This is a Banksy mural that is part of a memorial wall for the 10 Irish Republicans who died in 1981 while on hunger strike in Maze Prison in Belfast.

While much of the tour was over our heads (a lot of information about a conflict for which we had little context), or unintelligible due to his thick accent, I will never forget the old man who was brave and generous enough to confide his personal experience of The Troubles and the trauma he still feels because of those events in Belfast. This man drove us through a neighborhood between the Catholic street and the Protestant street, and as we stopped and he showed us a memorial garden and mural, he proceeded to tell us about the bomb that went off as he was driving another cab down that very same street only a few decades before. The cab driver and his family survived – but he told us that he had witnessed the death of another woman on that street. After this event, he sank into a depression that could have been similar to survivor’s guilt, and he could no longer drive his cab anymore. It was his young six-year-old son who pulled him out of this spiral by asking him to go to counselling. Decades later, he drives a cab everyday and educates people from near and far about the political conflict that had Belfast shut off from the world for decades. He educates people about the negative effects of the violence there and the steps that have been made towards peace which could so easily be destroyed. And he told us that he has only just recently been able to begin sharing his personal experience, which in its own way is also a large step towards peace. 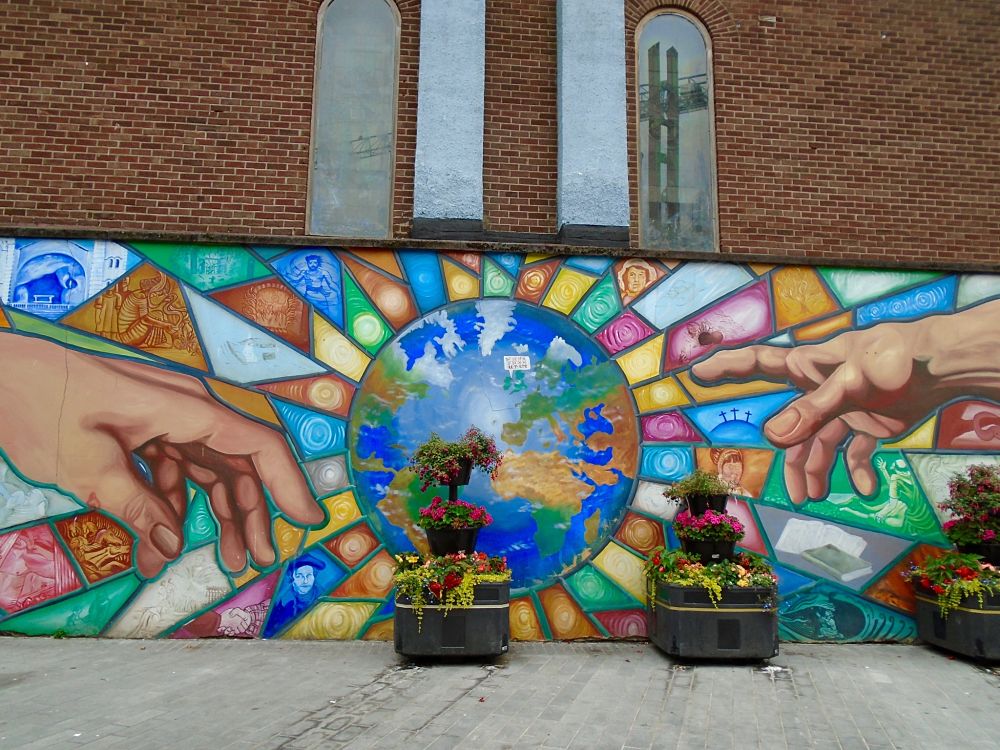 This mural in Belfast shows the globe in between two hands representing Michelangelo’s “Creation of Adam”, and on the Northern Ireland part of the globe there is a tag saying “You are Here”. Really puts it into perspective, doesn’t it?

The next stop on our tour was the Peace Wall which divides the Catholic and Protestant sides of Belfast, and which not only had a ton of really cool murals, but which also had space with graffiti where visitors always signed their names and wrote quotes encouraging the continuation of peace. One quote in this area said “Your neighbor is your other self dwelling behind a wall.” This, along with another really beautiful mural in Belfast, served as a reminder that no division (of a physical wall, political border, or even an entire ocean of separation) should ever cause us to lose sight of our common humanity. 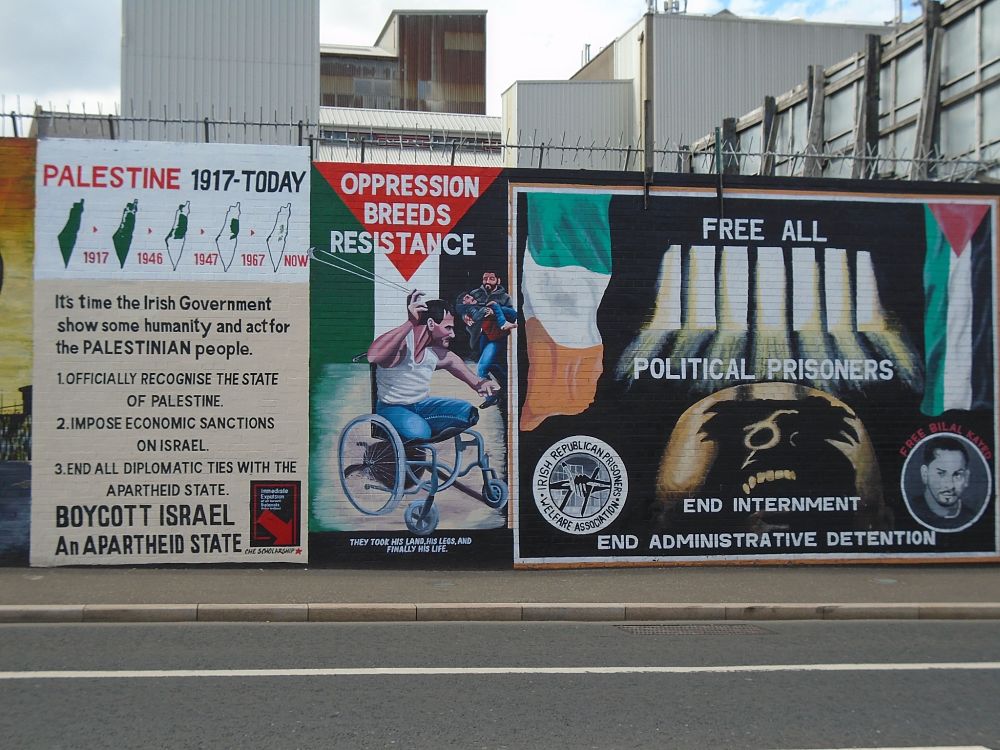 These murals are some of the most recent additions to the Peace Wall which still stands separating the Catholic and Protestant sides of Belfast. The gates of the wall are currently open all but two days of the year (closed on big holidays for safety reasons), but our Black Cab driver repeatedly emphasized that while there is peace and unity today, no one knows how things will turn out.

After getting back from Belfast, I visited the Kilmainham Gaol, which was an even deeper lesson into the history of Ireland and its journey to independence from Britain. This was very enlightening, especially as Ireland’s declaration of independence is so much more recent than that of the United States. However, the biggest takeaway from my visit to Kilmainham doesn’t actually have anything to do with Ireland. At the Gaol right now, there is an exhibit about Nelson Mandela’s years in prison in South Africa, because he was a political prisoner just like those held there during the Irish Civil War. The exhibit includes many quotes from both his time as president of the nation and his time in jail, ranging from political to philosophical to incredibly personal quotes. Just as the museum was about to close, I was skimming through the last few walls about Mandela, and I saw two quotes about how much he missed his wife and daughters. They were excerpts from letters to his wife, and they were heart-wrenching. But for some reason, coming from a place of missing my home and family as well, reading those quotes was oddly comforting. Mandela, while in prison for attempting to improve the state of the country he was in, sent messages of hope and change and spoke of his political goals going forward, but in addition to all of this his greatest pain was being separated from those he loved. It is the most human feeling in the world to miss being near the ones that are closest to us in our lives. Even one of the greatest leaders of all time got homesick. 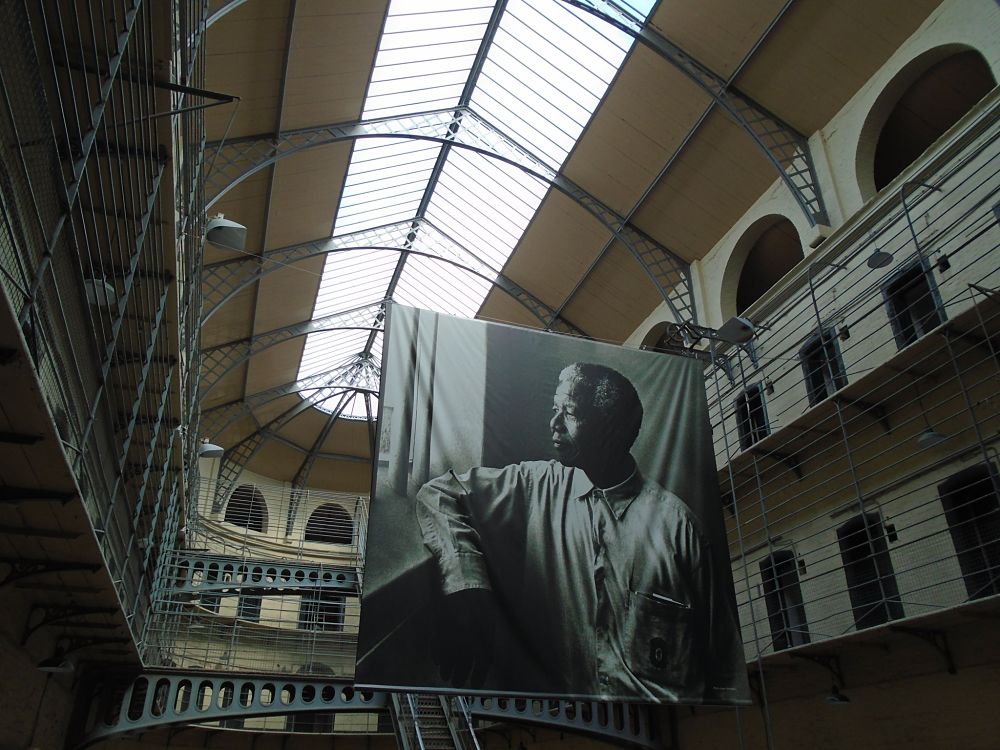 At Kilmainham Gaol right now they have an exhibition about Nelson Mandela and his time as a political prisoner in South Africa. The reason for this exhibition is twofold – it is in celebration of 25 years of diplomatic relations between Ireland and South Africa, and of what would have been Nelson Mandela’s 100th birthday this month.

Mandela was in prison and didn’t know if he would ever see his family again – I know that I’ll be going home in just a few weeks. Every time I get homesick from now on, I’m going to think of the mural in Belfast telling me “You Are Here”, and that I won’t be here for much longer, so I might as well make the absolute most of it. That goes for my time after this summer as well; I might never be a great world leader like Nelson Mandela, I might not cause great strides toward peace to be made anywhere on that globe, but I can do my best to make my little “You Are Here” tag a more peaceful and loving place, wherever I am.