This has been a big request for a while now. One of the most popular aspects of Japanese culture is the food, and I knew that a blog post composed of the types of things I’d eaten would be inevitable. When I told people that I would be studying in Japan, one of the most common responses- and questions- would revolve around Japanese food. Either about how they loved it or wanted to know if I liked it. I do love Japanese food, but now that I’ve been living here for so many months, I see it in a different light. It’s no longer “exotic” or “specialty” to me, because it has become a staple in my everyday diet. Not to mention the fact that there are so many types of dishes- some that I had never even heard of until arriving here- that I’ve only started to try. As there are many great things to eat, I realize that one blog post will probably not be enough. Perhaps I’ll add more in the coming days, but for now, enjoy some of my favorite dishes that are common in Tokyo. 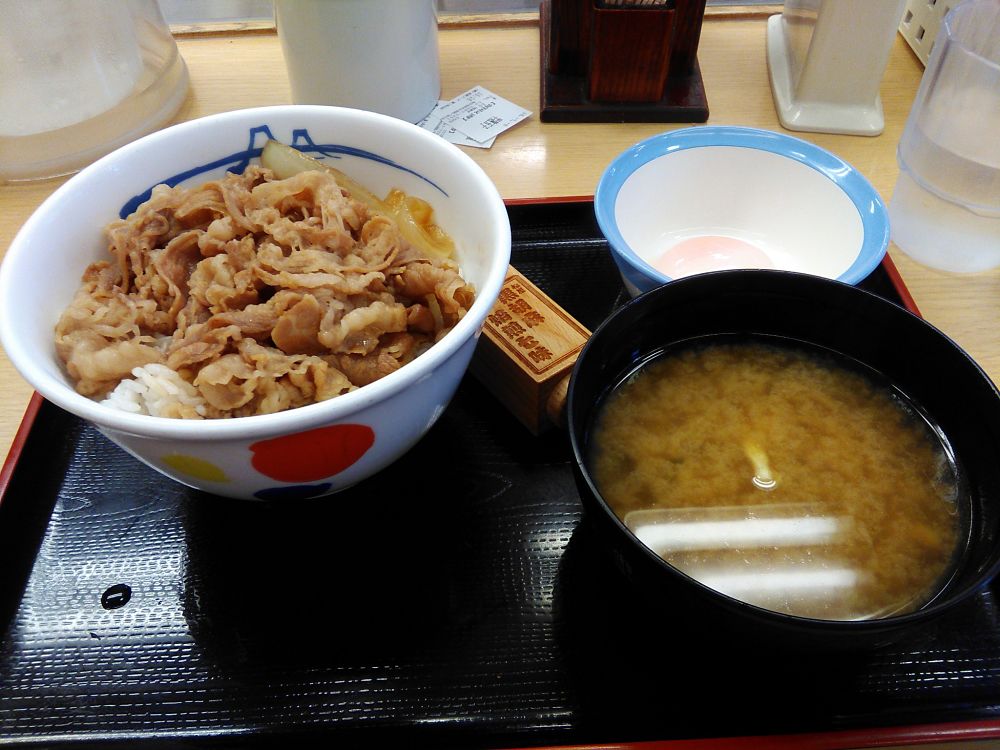 Gyūdon with miso, one of my favorite Japanese meals

Quite possibly the dish that I will miss most upon my return to the states, despite its simplicity and easiness. Gyūdon has become one of my favorite Japanese meals, and for several reasons- it’s cheap, it’s fast, and it’s filling. If you haven’t heard of gyūdon, hear it from me: gyūdon is the ingenious concept of having a bowl of rice, topped with beef and onion, and simmered it in a mildly sweet sauce. It sounds simple, but it tastes terrific. And with several chains that specialize in the dish, it’s a great and affordable option when you’re looking for a quick bite. Not only is it faster and less crowded than McDonalds, but it’s also a healthier option (as far as fast food goes at least) and satisfies the stomach without making you feel bloated. A large bowl can also be purchased for as little as 300 yen (about $3.00 USD), and it is usually accompanied with a bowl a miso soup, so it’s one of the better options if you’re running low on cash. I would like to think that the United States might discover gyūdon one day. Maybe it has and I’m just uninformed, but I never heard of it until coming here. That said, these type of chain restaurants would make a bundle back home. 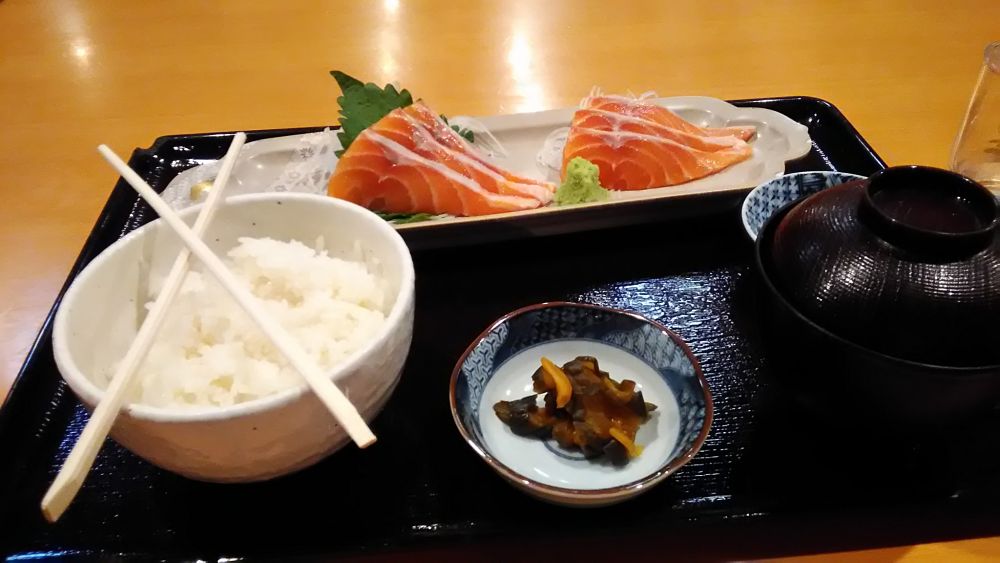 One of my favorites, and probably the favorite for many others as well. There are so many positive aspects to having sushi in Japan as opposed to having it in the United States. While the quality certainly varies, as it would anywhere else, the cost and quantity is much more compromising. Sushi is an expensive dish in the United States- it’s not uncommon for only a few pieces to go for over $15. In Japan, however, that same price could pay for almost three times the amount you would get back home. None of my sushi meals, including all-you-can-eat buffets, have exceeded the $20 mark. Of course, some restaurants and dishes (red snapper, for example) can command high prices, but the overall price, quality and quantity is much better than you would find anywhere else. So, yeah, I may have paid $5 for two pieces red snapper, but it’s well, well worth it. 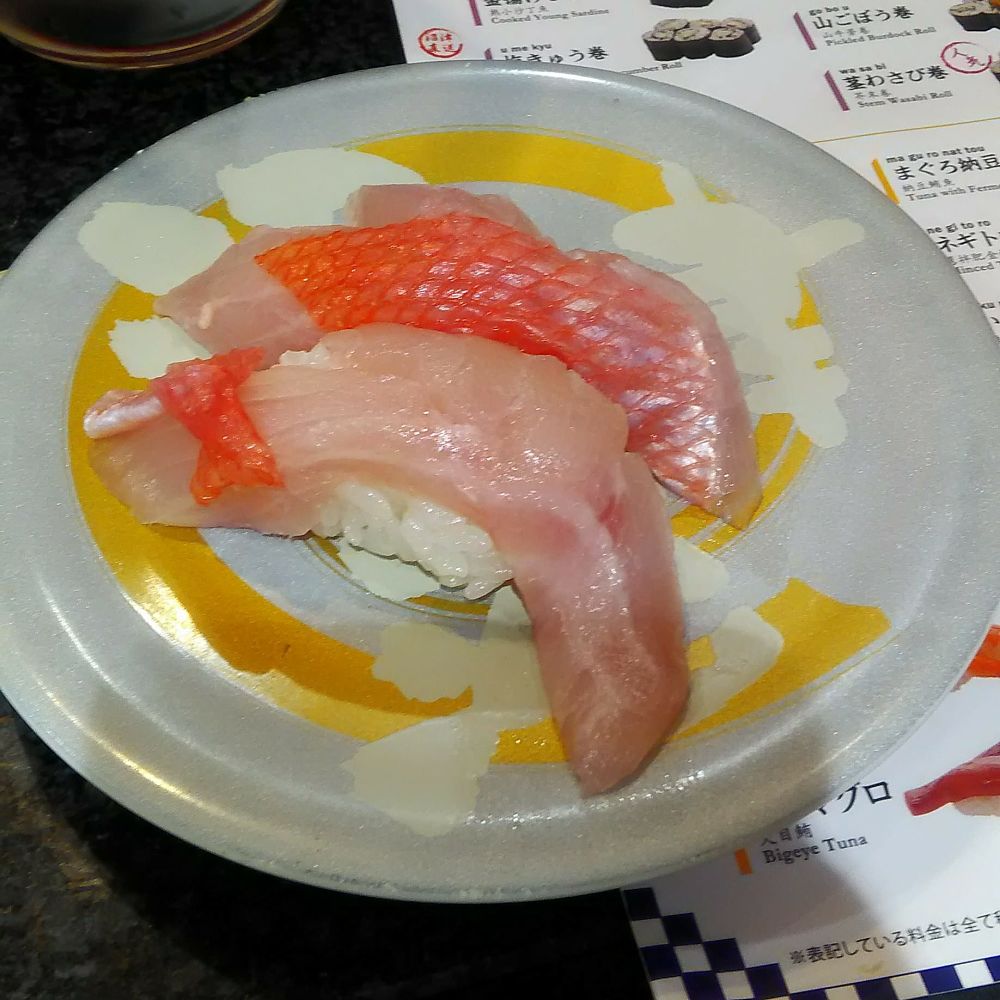 The sushi itself is also quite good, as one would expect. I mentioned that the quality varies depending on the restaurant, but fish in Japan is usually very delicious. There is a much larger emphasis on “nigiri” sushi here (fish packed on top of rice) than there is with “roll” sushi, as is the more common style in the United States. Most restaurants also work with conveyer belts that carry dishes to your table, although the customer may also order what they’d like through touch-screens or asking the chef directly. In my experience, it’s much better to do this than to wait for it to come by on conveyer belt, as the made-to-order dishes are made fresh and immediately.

This is the big one. Arguably bigger than sushi. But in sushi’s defense, it’s hard to top a food that can be both a quality restaurant dish as well as a bottom-of-the-barrel supermarket necessity. Prior to my trip, I’d only gotten to eat “authentic” ramen once or twice. Now, I have it at least twice a week. Between the low cost, serving sizes, and various options to choose from, it makes a solid (and filling) meal. There are many options to choose from, but I have two that have become “the usual” choices: Tonkotsu Ramen and Abura Soba. 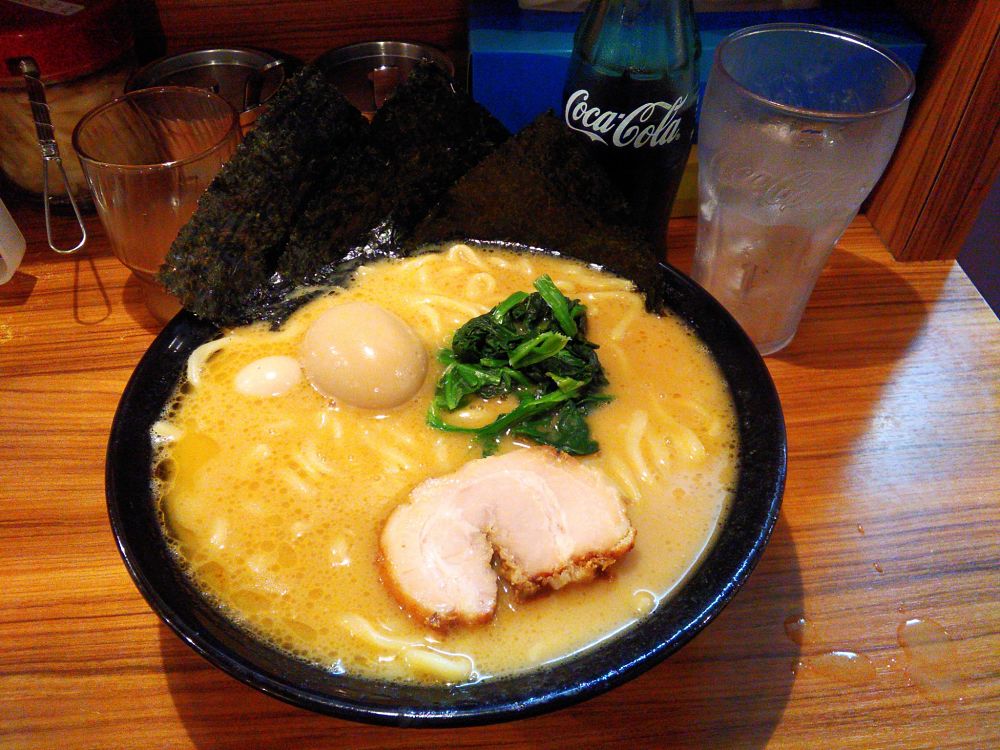 Tonkotsu Ramen is probably the most commonly-consumed style of the dish. The noodles are traditionally served in a thick pork broth, with slices of seaweed, pork belly, and an egg added on top. As someone who never really liked soup, this particular meal wasn’t my first choice, but it’s since grown on me, much like miso has. After a Japanese friend recommended it, and took me to a restaurant where it was the most popular item on the menu, I’ve changed my mindset. My only regret now is that I didn’t start eating it sooner. It’s really quite delicious. 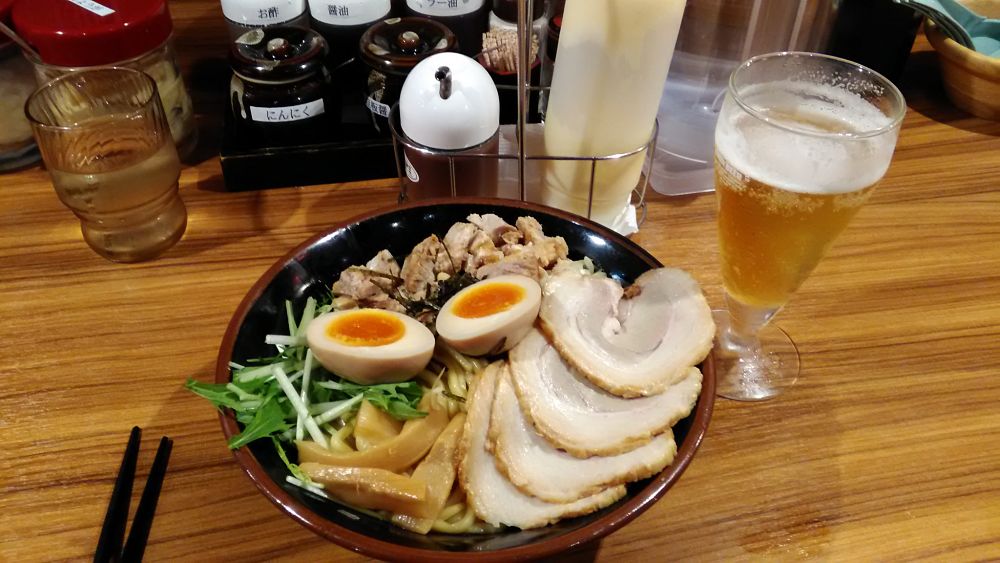 The other style of ramen, Abura Soba, is what is known as “soupless ramen.” As I mentioned earlier, soup wasn’t my favorite food when I first arrived in Tokyo, so this option was the natural choice. When comparing both, I do ultimately think that tonkotsu is better and more flavorful- but abura soba offers a slightly larger portion of noodles in exchange for broth. There are also additional toppings that are added, so the meal has its perks if you’re in the mood for it.

Eating ramen in Japan is quite an interesting experience. Ramen shops are common, but the best ones are small and out of the way. You’re usually placed at the bar, where you can see and hear the chefs cooking the dish right in front of you. Making ramen seems to be both a messy and hectic job. There are always tons of pots and pans of every shape and size, and the kitchen is constantly engulfed in hot steam, as everything is made fresh and on the spot. It’s a wild job to have for a chef, but you can be sure that you’re getting the most authentic meal possible. So far, I haven’t had a bowl of ramen that I didn’t like. 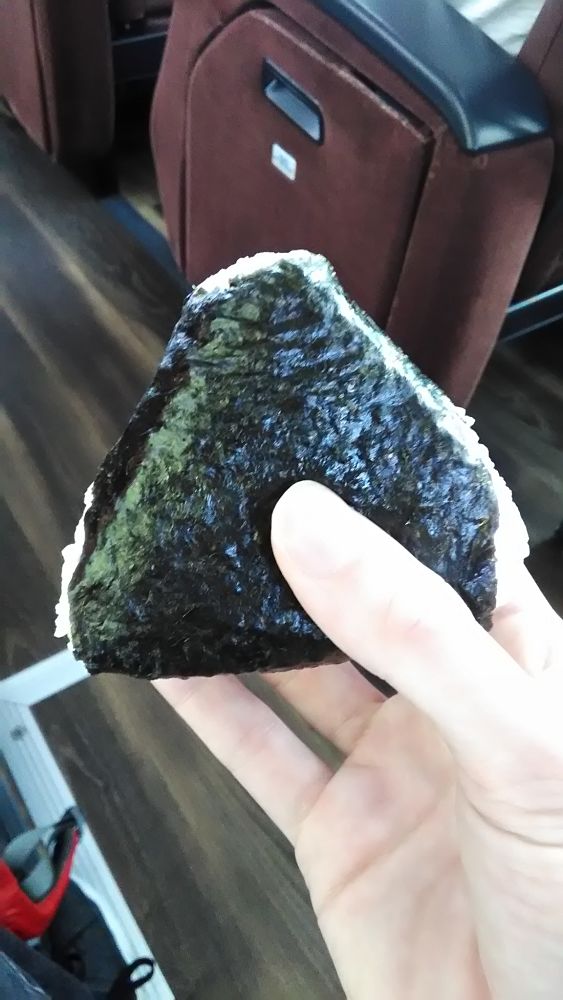 This one is a lifesaver. You might be familiar with the image of onigiri; that small, triangular-shaped mound of rice, usually wrapped in seaweed. It appears in a lot of cartoons. This is a common and quick snack that is very popular and convenient in Japan. It’s perfect food for on the go, as it is cheap and easy to carry, but it also fills you up and can keep you stable until your next meal. Onigiri is always packed with a filling- usually cooked fish, like salmon- and can serve as both a snack and a meal, depending on the size and quantity. I had never had it prior to my trip, but if you enjoy fish, it’s a pretty great concept. Onigiri is available at convenience stores all over Japan (I’ll touch on those later), and have gotten me out of many tight situations where I was either low on money, in a rush, or needed a quick bite before a presentation or exam. I need to learn to make these for myself! 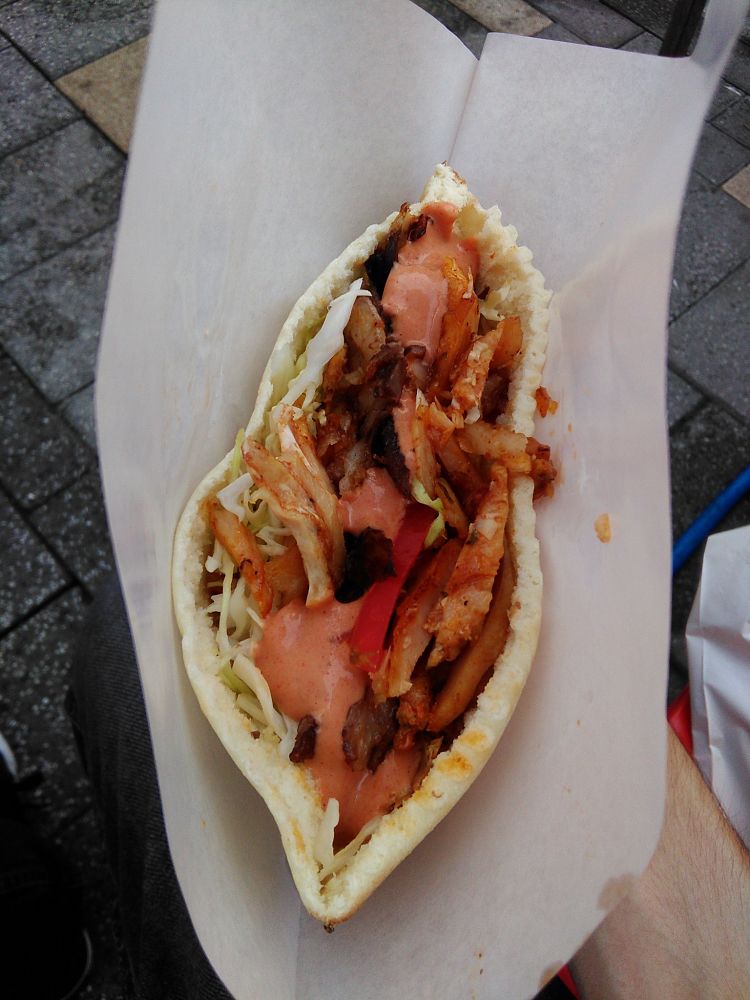 This might come off as an odd entry, but hear me out. I was surprised to see that Tokyo has a pretty solid number of people from Middle Eastern countries. Consequently, there are dozens of Halal restaurants, falafel stands, and food trucks. And they are good. They are really good. What makes this type of food great is that it’s the perfect escape when you feel that you’ve had “too much” Japanese food, and want a change of pace. Tired of fish, rice, or noodles? Falafel. Want flavors that are zestier than soy sauce? Falafel. In a hurry or low on cash? Falafel. You just can’t go wrong. In all honesty, the falafel has saved me a number of times and it’s foods like these that keep me from going crazy. I think that falafel is a good addition to this list, because, despite the great traditional food that you can try in Japan, it’s always good to have fallback to other cultures and styles. Sometimes onigiri just isn’t going to cut it, and you need to have falafel for a change. Or McDonald’s. And you can badger me all you want about getting McDonald’s when I should be eating more traditional food, but look- if I’m presented with the opportunity to have a Gudetama McFlurry, I’m going to have a Gudetama McFlurry. 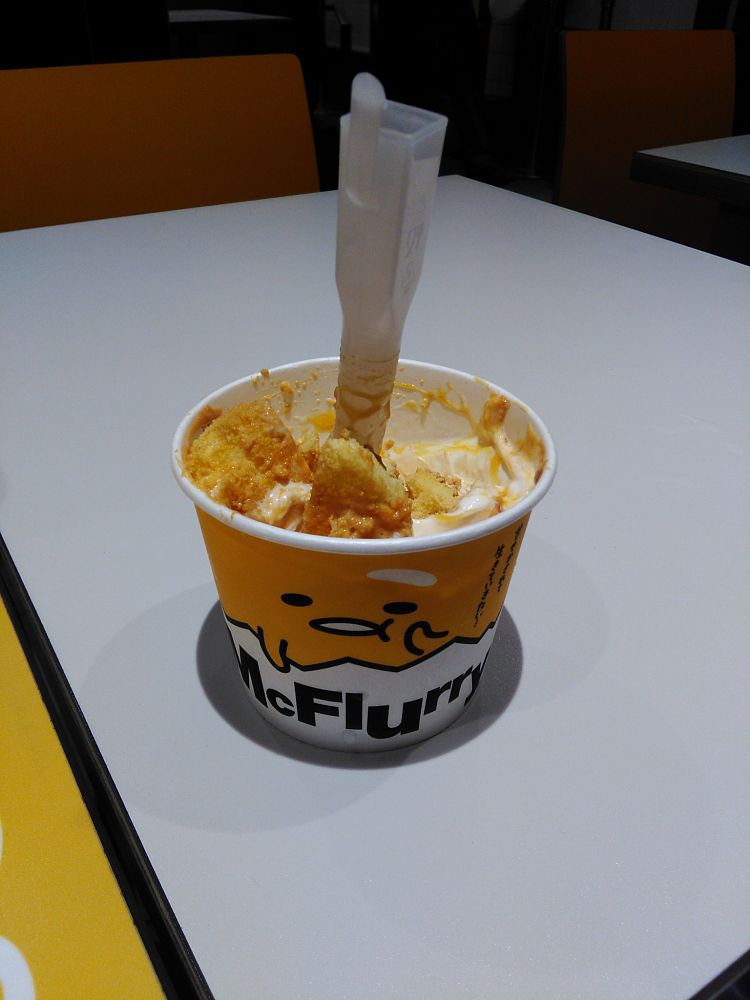