Days are passing by as if in a blur now, and at the end is that inevitability: the departure. It is perhaps somewhat telling that I think about the end of my program not as my “return” as many of my fellows have spoken of it, but that “departure.” I think very little of what I’m coming back too, and constantly of what I’m leaving behind. The friends I have made here hold a special place in my heart; if the old wisdom that college friends are more likely to last because of concentrated and better aligned interests is true, then language immersion friends ought to last to the moon and back, as precisely aligned as we are— and yet we’ll maybe never be together like this again, with miles, and miles, even states between us. The market that can be found near every morning in the streets of the town center hums with something comfortable and eternal that so many will see every morning, and which I may likely never see again after this Friday. The penetrating, pervasive ring of church bells in class, at lunch, on walks, on benches with late-night gelato, and the assurance that they can be music and nothing more because no one’s in any hurry here will soon be just a recollection. 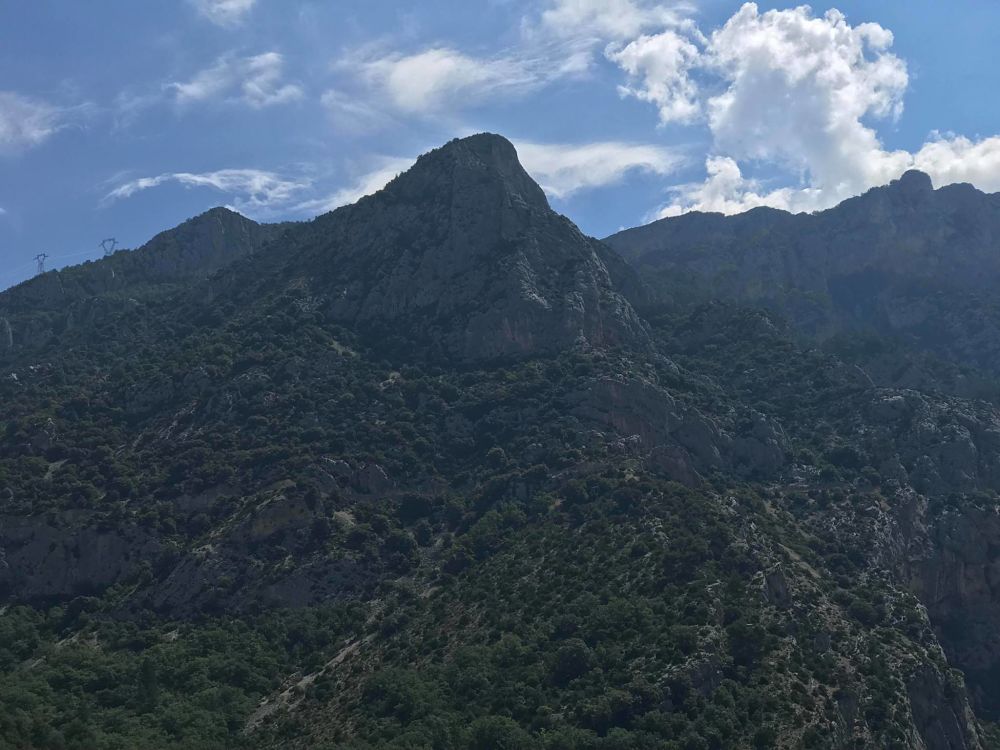 The mountains that hug our little city, and which I may be seeing for the last time. 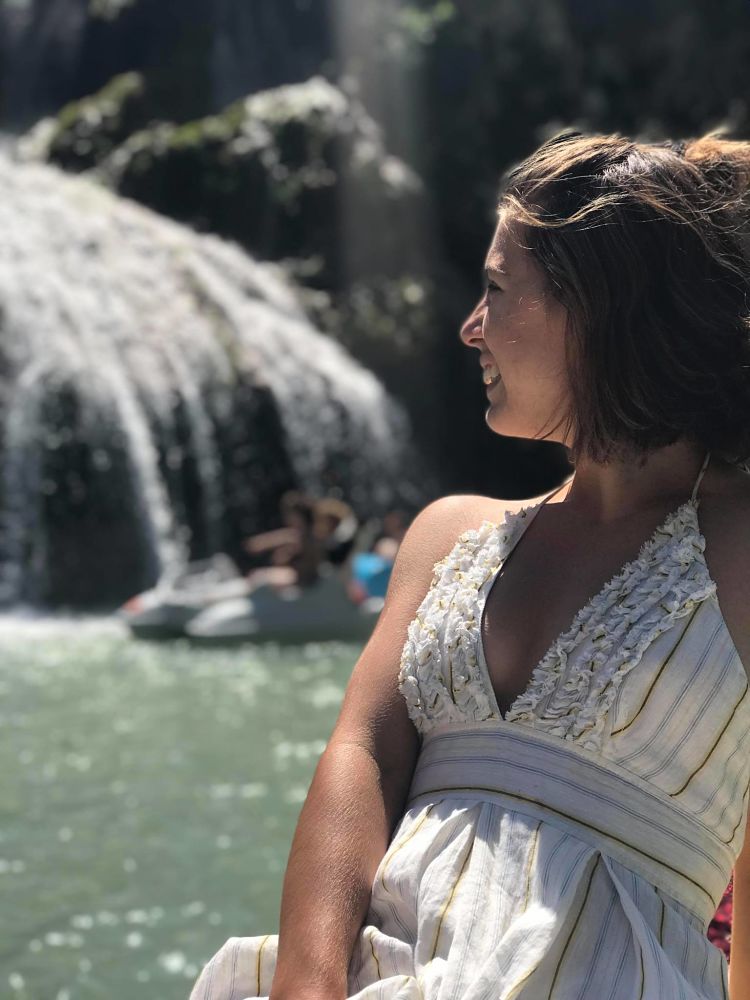 My friend Anna Margaret, soaking in her own memories of Provence and a healthy dose of summer glow.

All I can see it what is fast slipping into the rearview mirror.

My host house is 40 minutes outside central Aix, and it’s a comfortable and welcome part of my routine to take the bus each morning to class. My housemate leaves early in the morning for her own class, and I follow at the leisurely hour of 11am. I’m of the peculiar sort that likes long car rides, and so a half hour on the bus with air conditioning and my headphones is really just the bee’s knees. I happily join the neighbors at the bus stop and have learned to thank the bus driver as I descend, wishing him well until next time (because despite my very real and very loudly ticking clock, it still seems there will always be a next time). Typically, this voyage is silent, with a sparse “Pardon” or “Merci” thrown out, but this particular day did not follow the well-established pattern.

A woman waited on the stop’s bench, glancing in anticipation in the direction from which our bus would come. “The 8,” she asked the girl standing next to me, just by the times tables, “When does the 8 arrive?” She was told, and took this answer with some dissatisfaction. This dissatisfaction was apparently because she had no clue what time it was now and so the information of the arrival time meant nothing to her. She asked another girl with her phone out: “The hour. Do you have the hour?”

It seemed at first she didn’t hear, that her headphones prevented it, but after an embarrassing number of repetitions and variations on this question, it became clear that she did not speak French. The woman scraped together a messy sort of English to ask her again, and at last had the face of the phone turned to her in silence. She was satisfied, but it seemed that the agitation could only be displaced, because she now examined the girl in curiosity. She remarked on a tattoo on the girl’s arm, asking what it was. “A dog?” she guessed in French. The girl was lost. She nodded and murmured an agreement in the half-hearted way one does when one has absolutely no idea what’s been said to them and no hope of asking again to hear it.

“A wolf,” I offered to the woman, in French. And then to the girl, in English, “Your tattoo, she wants to know what it is. It’s a wolf, right?” And in this offhanded statement I positioned myself, quite by accident, as an interpreter between the two. A conversation followed, in which the woman offered too much advice on how the girl should handle her body, and vague bemusement from the girl. The bus came, and went, and we went with it. As we boarded, the girl caught my eye. “Are you a student, too? With the university?” I said I was, and that I was with the French Honors Program. “I could tell,” she joked, and she was gone. The woman sat next to me on the bus, and when I had been quite ready to whip out those headphones and zone out, she spoke. “That girl, she doesn’t speak any French?” I said no. “And you, are you English?” I said I was American, that both of us were students in town. She took a brief interest, and we spoke a while. She wanted to know, without any reason I could see, what the English word for ressembler was. “To look like,” I told her, and we hushed as the bus filled at the next stop. 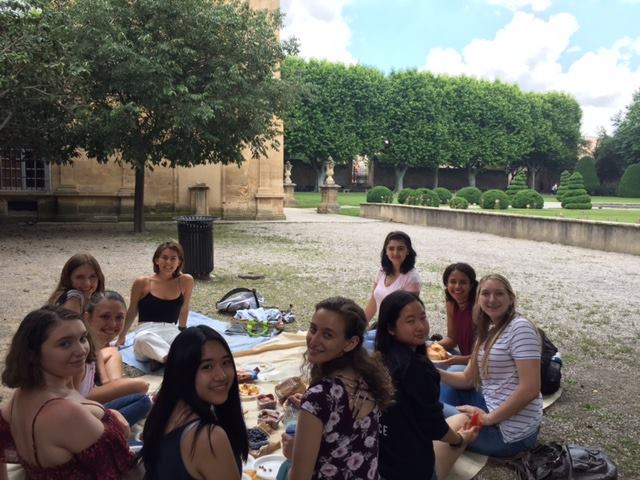 The full roster of the French Honors Program, with whom I have grown undeniably these past six weeks.

I chose the program in Aix — chose to study French as a whole — because of a desire to pursue a career in translation. It was a necessary step to my fluency before it was a real place with people and streets and culture that I would miss, and as I sat on that bus in the quiet that followed this interaction, I remembered that: Aix is a step toward more. At a chance bus stop meeting, I’d mediated a conversation, and it was easy, it was natural. I didn’t think, as I often worry for my future, about how much I should maintain of a speaker’s attitude, how much I should soften phrases or give sympathy to either party. It just flowed, and it worked, and I did that.

I’ve been so caught up in the things I leave behind me here that I’ve forgotten what comes back with me and to what end. I return with knowledge, with experience, with honed intuition. I return to pursue that career in translation, and to bridge communications, maybe mundane like this chat, if I wind up a personal interpreter, or formal and yet similarly diplomatic, if I wind up in government, or in business.

Dans ma vue, Aix a ressemblé la fin de l’histoire. To me, Aix had looked like the end of a story. But ressembler, to look like, is not être, to be. 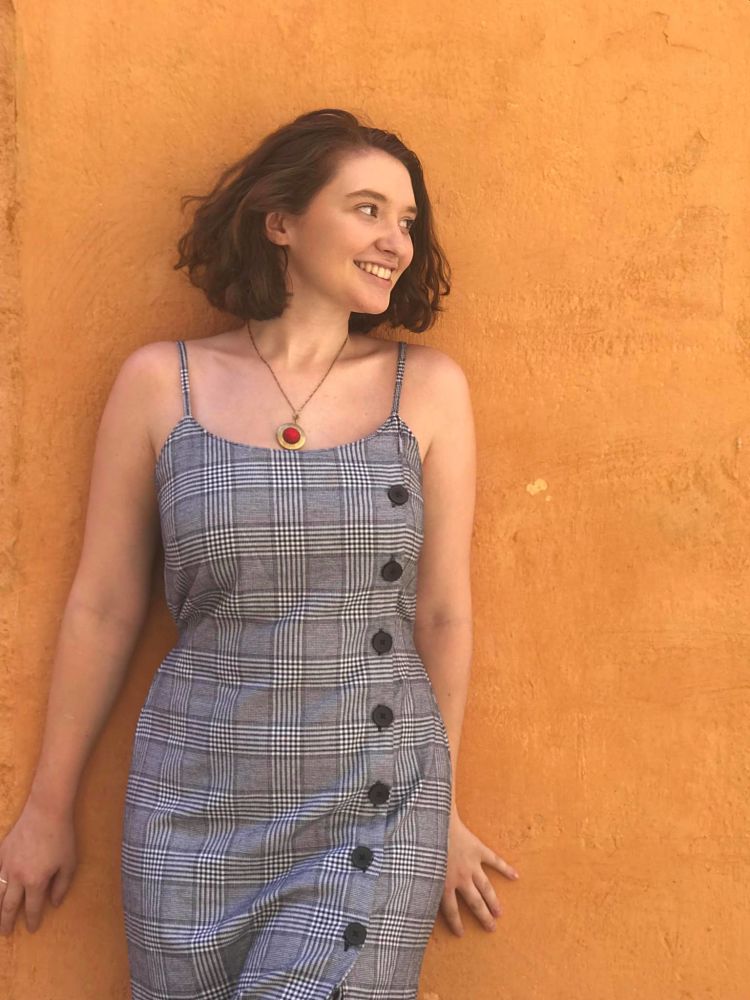 Looking off camera right to that big, bright future, and also probably the friend laughing while I have my picture taken.

I still look to my departure with sadness and with apprehension about my continued growth and learning in the French language. How will I ever keep it up when I’m stateside? Ah, but those friends of mine need their French fix too, and there are weekly café video calls in sight for us. There is more to come, always more. I need to accept the approaching end of this phase in my journey, and yet hold fast to it as I meet the next, a better person and a better francophone for what I’ve achieved this summer.

It might well look like the end, but this is only a taste of the broad and indeterminate future.