Your first instinct on seeing this title was, perhaps, to imagine the fun and popular party game limbo, in which competitors aim to shimmy beneath an increasingly lowered pole without falling. You maybe imagined some kind of allusion to how as time goes on and language skills get better I might be expected to perform more and more complicated linguistic hurdles as fluency improves. You hoped that maybe I’d make some kind of fun allegory out of the game to explain the continued and continuously harder approach to fluency. I’m sad to say this is more the “uncertain and pseudo-hellish waiting room” kind of limbo. (That first idea sounds better, huh? I think I made the wrong commitment on the direction for this entry.)

Limbo has the unfortunate burden of meaning two very different things, and of, possibly, being the reason you’ve been tricked into reading this journal. But while you’re here, why not prenez place and faire un petit peu de thinking with me about the weird and wild no-man’s-land between monolingualism and bilingualism? 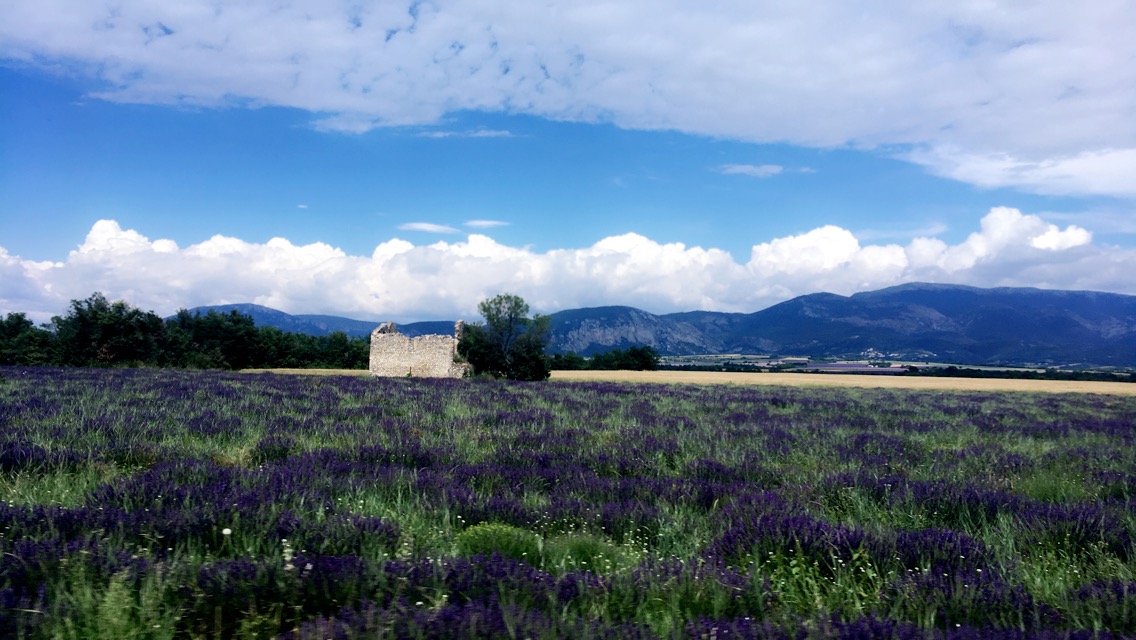 Provence is known for its beautiful lavender fields, as well as a thick accent that tortures French students.

In the language learning process, my friends and I are discovering that there’s no streamlined path to your fluency card, but a series of waiting rooms (pseudo-hellish or otherwise) in which you get held up and from which it feels you’ll never escape. Our most recent and more amusing discovery is a shuffled mélange of our two languages. This is not to be confused with a relapse into English. That traitorous habit presented its problems for some time, and the urge still strikes fiercely every now and then, but when this first challenge is overcome, there follows another tendency, stranger than its predecessor — the mixing.

“Je think,” I say when switching between languages too fast.

“I need to make un petit voyage à cette ville,” another says, and we laugh at the sound of it.

“Yeah, c’est difficile, mais on doit le faire, you know?” It’s said with a shrug, and we don’t even notice the error as it happens. 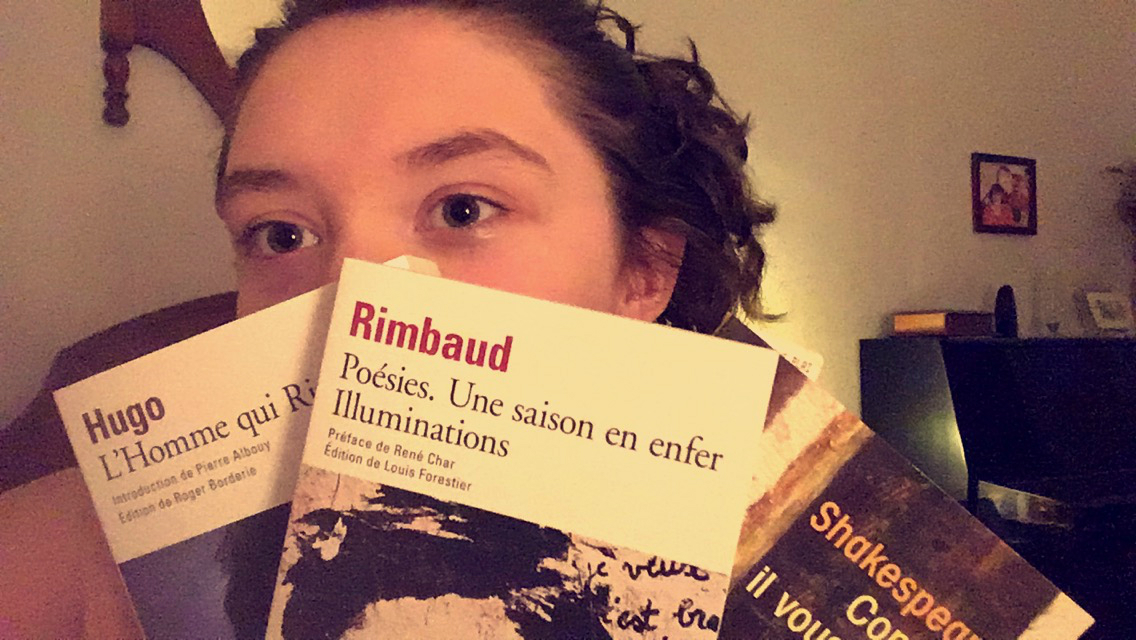 Maybe the reason I can’t figure out how to talk like a normal person in French is all the stuffy, old literature I’m reading.

No, this habit is distinct from a relapse into English. In fact, it’s more common for us to add French words into the middle of English phrases. Oh, you say, so this is a backdoor brag about how good you all are now! I know your game! Well you’re wrong for one, and for what it’s worth I told you at the start there’d be no games (I know, you’re still disappointed). But quite seriously, none of us feel good about our French skills, and still frequently are left in the stuttering, stumbling dead air before an inevitable “Désolée, je ne sais pas comment dire…” (“Sorry, I don’t know how to say it…”). None of of us would call ourselves fluent, not seriously, but we’re left sort of stunned and pleased by this invasion of French in our casual speech. We don’t quite know what to make of it, but it’s infected my group of friends dans son itégralité. My housemate even evidenced how we forget how English works on occasion in saying: “He asked me if I spoked English,” to which, I assure you, we all answered that no, apparently she did not spoke English.

I spoke with my housemate with past Saturday night at the empty bus stop about this now well documented and well understood habit, and she expressed real frustration with the progress she still had to make to reach fluency. She, like all of my friends and I, had been told in our American classrooms that we were great students, and just on the brink of the breakthrough that is fluency. “After a month in France, you’d be completely fluent.” Well, it had been a month, and my housemate was not feeling that miraculous proficiency washing over her. There’s no way to really know how close you are, she explained, and there are no good road markers between our fumbled French and real, authentic français. 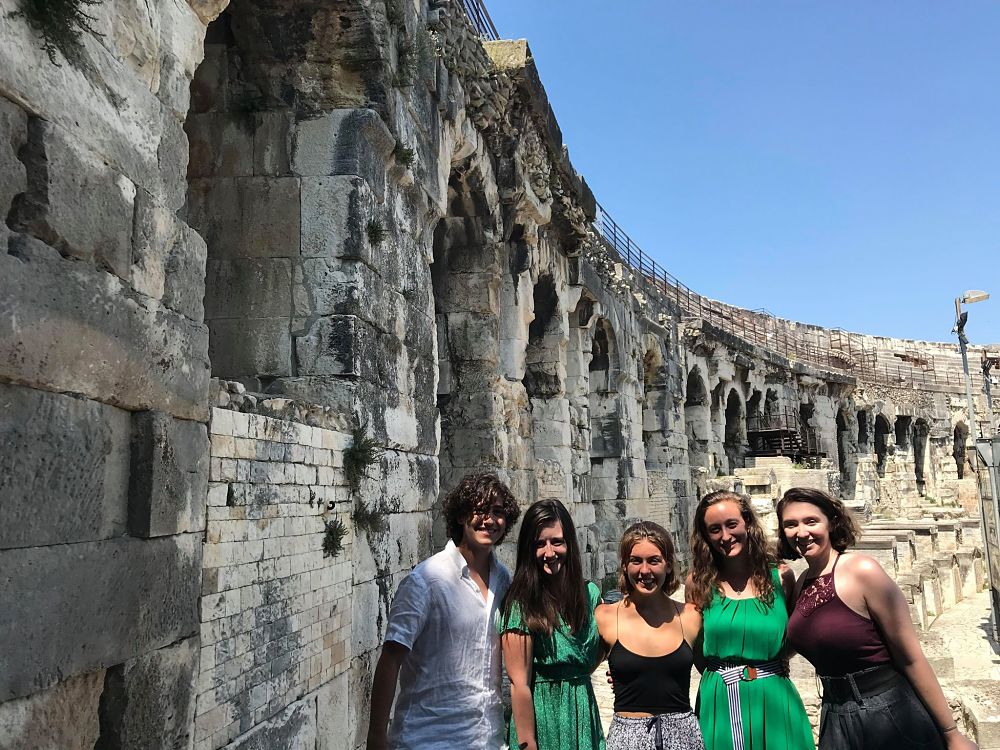 The “Franglais” squad; possibly bilingual, possibly a complete mess in both languages.

It reminded me of something I’d once heard from a teacher. Not a French teacher, oddly enough — not a language teacher at all, but a theology professor, polylingual himself. He’d explained as a throwaway, minor addition to some funny story a thought that has remained with me since I heard it. Fluency is often hard to define, as my friend observed, but is often quantified as a point at which you stop having to “translate” concepts in your head to find words. For example, to look at a chair and find the French word, for a non-fluent speaker, would be a association of “material object = chair in English, chair in English = chaise en français.” For a fluent speaker, the concept of the object does not need to make the pitstop at English to find the French word. The association is with the object itself, and not reliant upon an equation to English.

I explained the professor’s thought to my friend. It didn’t exactly quell all her agitations, but it seemed to be reassuring to the both of us as we reflected on the nature of our now frequent linguistic mishaps. We were making immediate associations to French words instead of translating in our heads. These little flukes are evidencing the beginning of our passage into bilingualism (or else they herald the complete meltdown of our brains that seems imminent at the end of long, hot days). Like some cultivated, niche code, this hodge podge of words requires us to think in both languages almost simultaneously, and while it renders our conversations more difficult to follow, and more obscure in meaning to outsiders, to those who are in the same headspace it renders then clear as day. Nous trouvons notre chemin vers le français, and soon we’ll be there.

This intermediate step has confused and sometimes frustrated us, though perhaps we shouldn’t be seeing it as some kind of aberration in our learning — a limbo we’re stuck in without end and without sense — but as a logical step toward the end goal — a purgatory, instead. Our imperfections are still being tweaked, and our mistakes straightened out, but it’s not an end, it’s a preparatory phase. And the promised land of fluency is still to come, with hard work, but recognizing and appreciating where we’ve already gotten is important too.

So we laugh when our sentences wind up some kind of English/French tossed salad. We continue to point out errors and amend them with seriousness in conversation but when a quick “Merci !” is given for the tip, you’ll hear a friendly “J’ai gotcha” in response.