I’ve found that it’s difficult to write blog posts, despite having so many things to talk about. Usually, I don’t have enough free time to do it. When I do, I get writer’s block. I’ll partly blame the busy schedule to midterms, which are right around the corner for us, but there has been another, more recent factor also bogging me down with deadlines and due dates: cartooning.

At the start of my semester, the university held a huge club fair that lasted several days, and it was recommended that all students- international ones included- go to find one that was a good fit for them. There were a lot of options to choose from, more than three times the number of clubs back at Marymount, so being able to settle on and commit to one was incredibly difficult. Many students found the fair to be a great opportunity for trying various types of Japanese sports. With options such as aikido, archery, and judo, I was tempted to do the same, but my interest in drawing was ultimately the deciding factor in which club I chose.

It turns out that my university publishes its own magazine, and was looking out for illustrators and cartoonists to contribute work. To make a long story short, I get to officially be a cartoonist again, something I haven’t gotten to do since high school. What makes this experience more unique is that I’m drawing for a magazine that is entirely in Japanese. Only one person in the club can communicate with me, and we have literally been sending our work back and forth to each other via email. The writers hand her their Japanese stories and poems, which she translates, and sends over to me. In turn, I read the pieces, draw illustrations for them, and send it all right back. It’s not unlike my past experiences of drawing for newspapers in high school, but the idea of having my work published in a magazine across the globe- one that’s not even in English- is quite a surreal feeling. It’s amazing that I’m able to collaborate with people, even through non-direct means, that live on the other side of the planet. 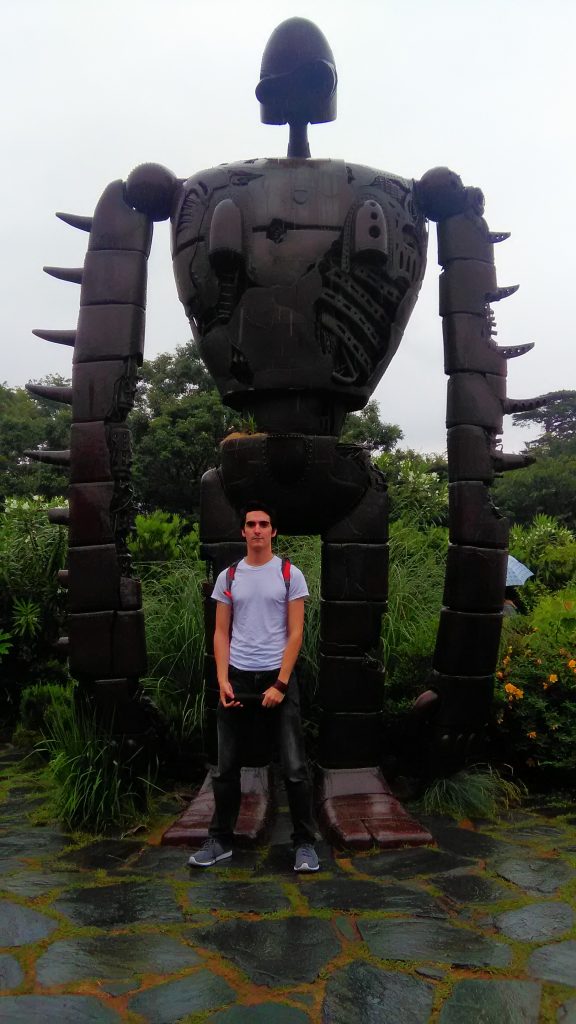 The Laputa Robot from Castle in the Sky, and me

On the subject of cartoons, it’d be a sin not to talk about my experience at Ghibli. Aside from midterms, which have kept my classmates and I busy, the only other thing worth marking our calendars for was the program field trip to the Ghibli Museum. While Hayao Miyazaki isn’t quite Japan’s answer to Walt Disney (that would probably go to Osamu Tezuka), I’ve found that Studio Ghibli has many similar qualities to the animation studio Pixar. Both started as small-run companies, paying attention to detail and only cranking out a film every few years. Despite this, each new release seems to break ground, and is often met with critical acclaim. Both studios can also hold their ground as independent companies, despite their ties and connections to larger, mainstream fields (Disney and anime, respectively). 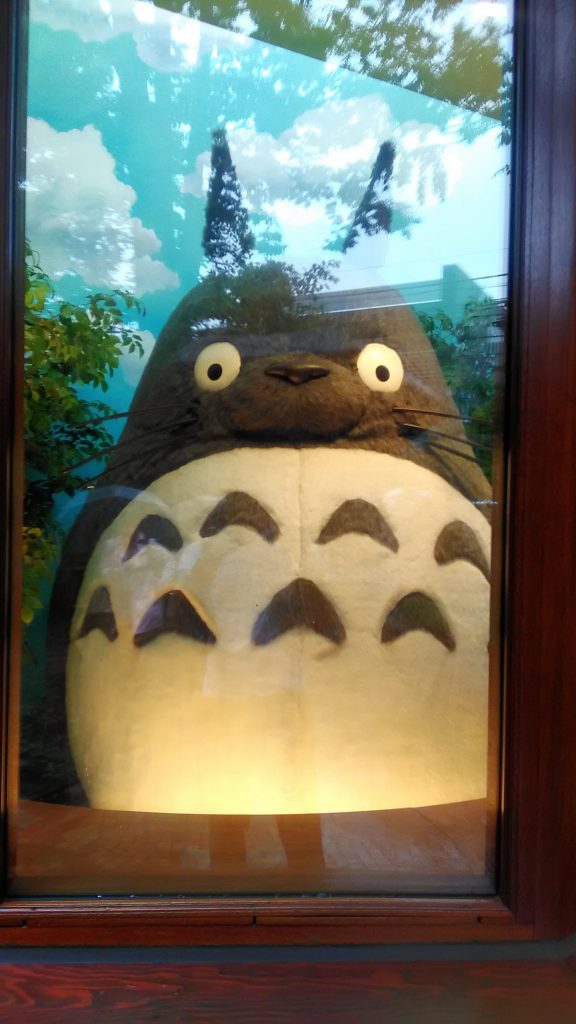 Totoro guards the front entrance of the Ghibli Museum

What I liked about the Ghibli Museum- and something that I think proved to be very effective in its layout- was its way of being able to show without telling. The Ghibli films are known for their attention to detail and visual aspects, and the museum is designed in the same fashion. No signs or descriptions are plastered on the wall; instead, you’re treated to drawings, concept art, and models adorned in areas that resemble Miyazaki’s personal office, as well as locations from specific Ghibli films. Visitors can look at and touch items such as old film projectors, photo albums, and flip books, getting a much better idea as to how the filmmakers might have found inspiration. Even the ticket to get inside the museum can be examined, as each visitor receives a small film strip from one of Studio Ghibli’s many features that can be held up to the light and looked at (mine was Howl’s Moving Castle). As a whole, the experience tells you all you need to know to understand how much work and effort goes into making these films reality.

We were also treated to a special short film, Boro the Caterpillar, which was made exclusively to be shown at the museum. In traditional Ghibli fashion, the short was well-animated, charming, and incredibly enchanting, proving that the studio is still on top and has no shortage of clever ideas. Boro stuck with me for the remainder of the visit, and I ended up leaving with a keychain of the character from the museum’s gift shop. But Ghibli wouldn’t be the only art and animation exhibit I would get to see. Only a few days after my visit, a Japanese friend from my building invited me to check out a special Shonen Jump exhibit, commemorating 50 years of the famous Japanese manga magazine. 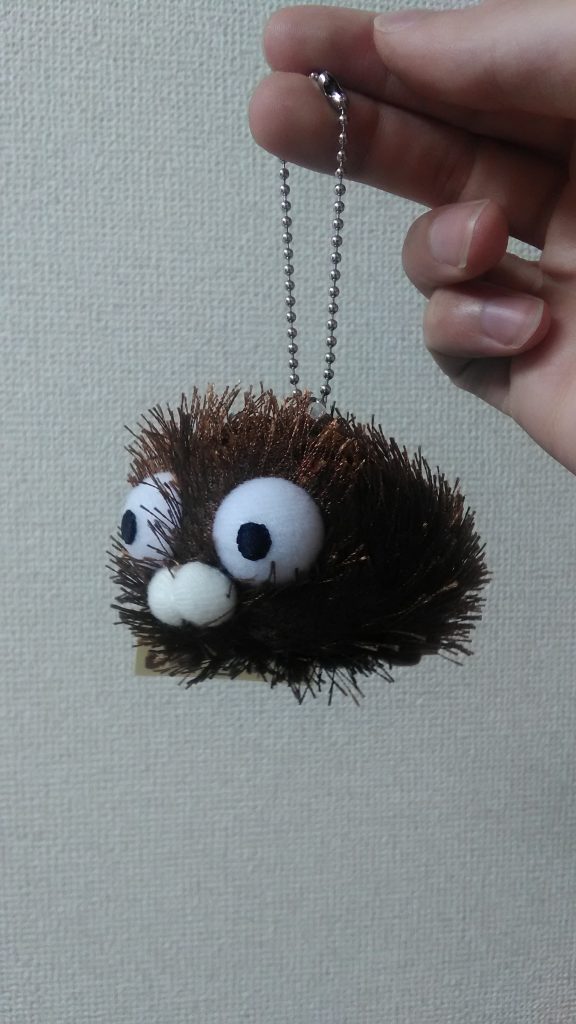 Boro the Caterpillar, whom I brought back from the Ghibli Shop

While not as “critically acclaimed” as the works of Hayao Miyazaki, the characters and comics published in Shonen Jump are just as renowned and well-known, perhaps more so than Totoro or Kiki or Ponyo. This is where Dragon Ball, Yu-Gi-Oh!, Naruto, and One Piece all had their start. Even though I’m not a huge anime fan, and haven’t read much in Japanese manga, I can’t deny that I haven’t heard of these titles. And while getting to walk through an animation museum and seeing concept art and paintings in one thing, getting to see the original comic drafts – and I mean the exact pages that are sent out to be published- is quite another. It’s a surreal feeling to walk through an exhibit dedicated to Dragon Ball, and look at the original pages from a comic you checked out of the library and read in middle school. It’s even crazier when you take a closer look and get to see the original pencil lines, the brush strokes, and the amounts of ink needed to make each page reality. “Most manga artists need to draw 22 pages a week,” my Japanese friend commented. “It is a very long job.” I don’t doubt it. 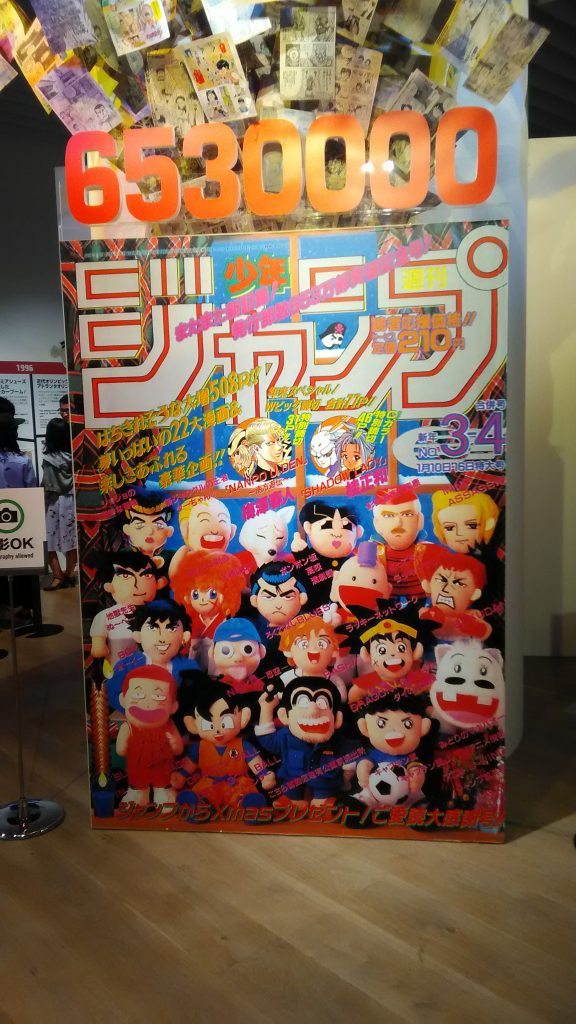 A cutout from the 50th Anniversary Shōnen Jump exhibit

While my experience at the Jump exhibit was not quite as memorable as Ghibli, it was an excellent way to cap off a week of Japanese animation and artwork. Getting to see what it takes for Japanese manga and animation to become reality was a mind-opening experience. And while I might be nothing more than an amateur right now, I’m more enthusiastic than ever to continue drawing and practice with the tips and tricks that I’ve picked up. What an adventure this week has been.