On the rare occasion that I’m free from classes and don’t have any assignments that bog me down, it’s fun to get out of the dorm and explore with friends all the areas in Japan that aren’t on my route to school. Whether it’s window shopping in Harajuku, a Virtual Reality event in Shibuya, or conveyer belt sushi in Ikebukuro, every district of Tokyo seems to offer something fun. One of the most popular destinations, however, are the arcade stations in areas like Nakano and Akihabara. Now, I’ve brought up the arcades, taken some photos, and briefly described them in previous articles, but the scope of these places is so much bigger that simply “mentioning” them isn’t going to cut it. There’s enough about these places to fill an entire blog post, so that’s exactly what I intend to do. 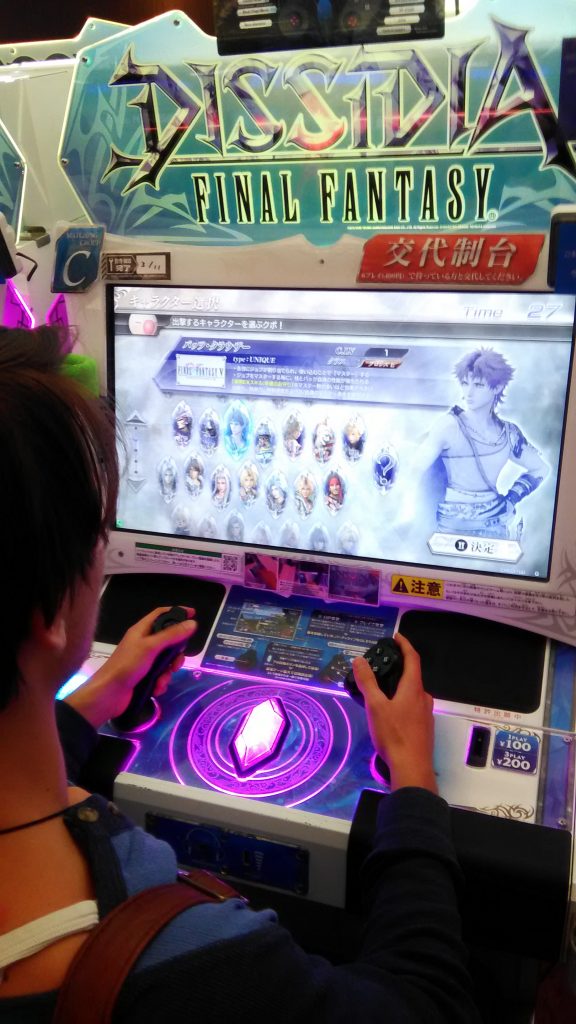 Arcade games in Japan are decades ahead of what we’ve got in the United States, and they are much more popular as well. The fact that there exist buildings with six floors of nothing but video games is proof. Conversely, arcades in the United States seem to be all but extinct. When I think of an arcade cabinet in America, I get the mental image of a dirty old “Ms. Pac-Man” machine in the back corner of the pizzeria downtown, with its tiny faded screen, grimy controls, and fading decals. Occasionally the cabinet will also have a big sheet of printer paper taped to the front of it, with OUT OF ORDER scribbled onto it in big, bold letters.

Compare that to what you see in Japan, and it’s another story. The arcade games aren’t “cabinets” so much as they are “machines.” With flashing neon lights, loud sound effects, and futuristic designs and controls, they look more like a set piece for “Logan’s Run” than a game that you can insert money into. The Japanese have adapted with the times. A friend of mine explained to me that, while arcades in America remained pretty much the same (and were consequently “killed off” by the competition of home systems as a result), the Japanese seem to do a better job of keeping their games both relevant and exciting. Something new and innovative is released on almost a yearly basis. And as a result, huge crowds of customers keep coming back, and business is bigger than ever. 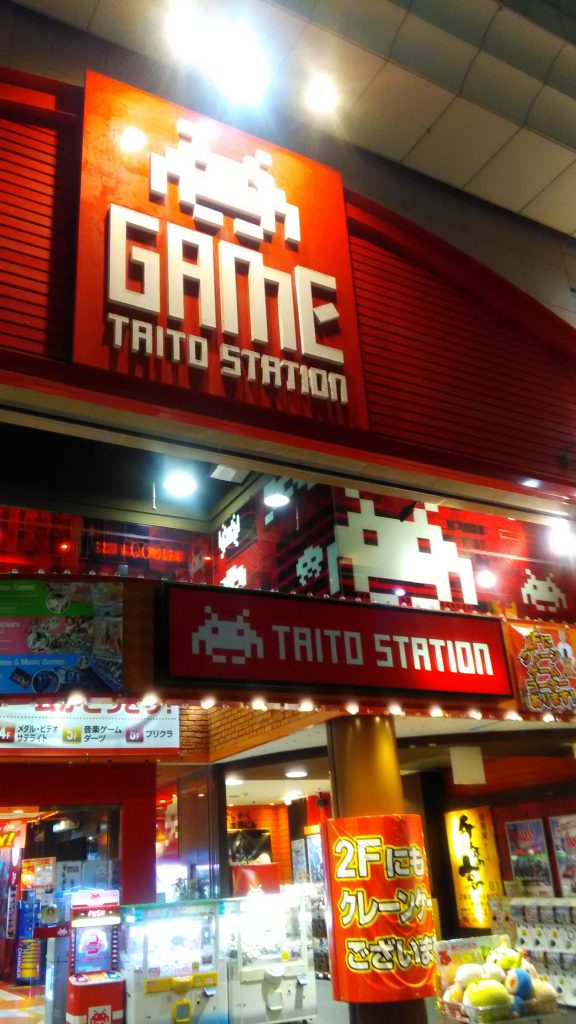 And that’s only the tip of the iceberg- the games themselves are the real attraction. Even as someone who has never been much of a “gamer,” I’m still impressed by the overall layout and execution that Japanese arcades have. Each floor will be dedicated to a certain “genre”- one might have nothing but music-related games that rely solely on touch, reflex and rhythm. Another might be dedicated to nothing but fighting games that promote Final Fantasy and Pokémon. And there are also floors that include games dedicated to racing, cards and strategy, pachinko, and other novelties like vending machines and photo booths. The most impressive thing I’ve tried, however, are “Panoramic Optimal Display” stations. These pod-shaped cabinets are designed for players to sit inside of, and work as a simulator for piloting a robot (in this case I was playing a game promoting Gundam). The chair vibrates, reacting to terrain and enemy fire, while a screen projects the action from all angles to make it feel as if you are literally in the cockpit. With a 500 yen playing fee (about $5.00 in the US), it was a bit steep, but definitely worth it.

And now that the subject of money has been brought up, I think that it’s time to mention what might be the most popular type of game featured in Japanese arcades: the UFO Catcher. 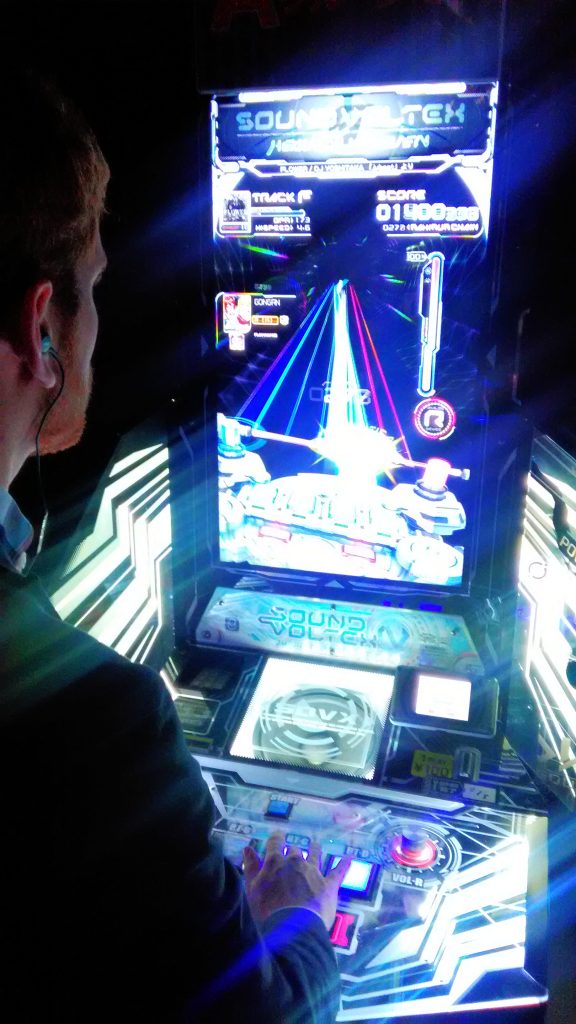 UFO Catchers are basically the equivalent of American claw machines. The goal is pretty much the same in both countries- to ultimately win a prize- but the ways to win can vary by the type of machine and its layout. And the prizes! I can’t go on without first mentioning the prizes. These aren’t the cheap generic stuffed animals that you find in American claw machines. In Japan, prizes are of very high quality and are actually worth trying to win. There are large pillows shaped like Pokémon, enormous stacks of Pringles, huge tins of gourmet chocolates, and t-shirts featuring popular anime characters. Strangest of all, some machines even feature “boxed” prizes, containing detailed statues and figure kits of characters from popular movies and TV shows (including Dragon Ball, One Piece, and, to my excitement, Godzilla). The prizes hang from a metal branch via a small looped string, and must be pushed off by the claw and into the prize slot to be won. As a result, they are among the most difficult items to win, but that makes the experience even more rewarding.

I’ve noticed over time that there’s an actual strategy to these games, and that most of them cannot be won in a single try. If you choose to play them, you’ll be expected to drop a couple of dollars unless you’ve learned the tips and tricks to become a master prize catcher. At least, that’s what I’ve been telling myself, because I dropped about eight bucks on one of these things just so I could win a foam rubber red snapper. It started off rather innocently. One of the cabinets had a display of realistic-looking fake fish, laid out to resemble one of the many counters that one would see at a frozen fish market. The idea wasn’t to use the claw to pick up the fish, but rather to strategically push them off the ledge and into the prize slot when it was lowered downward. As the prizes were unique and the concept seemed easy enough, I decided that this would be the claw machine I’d have a go at. 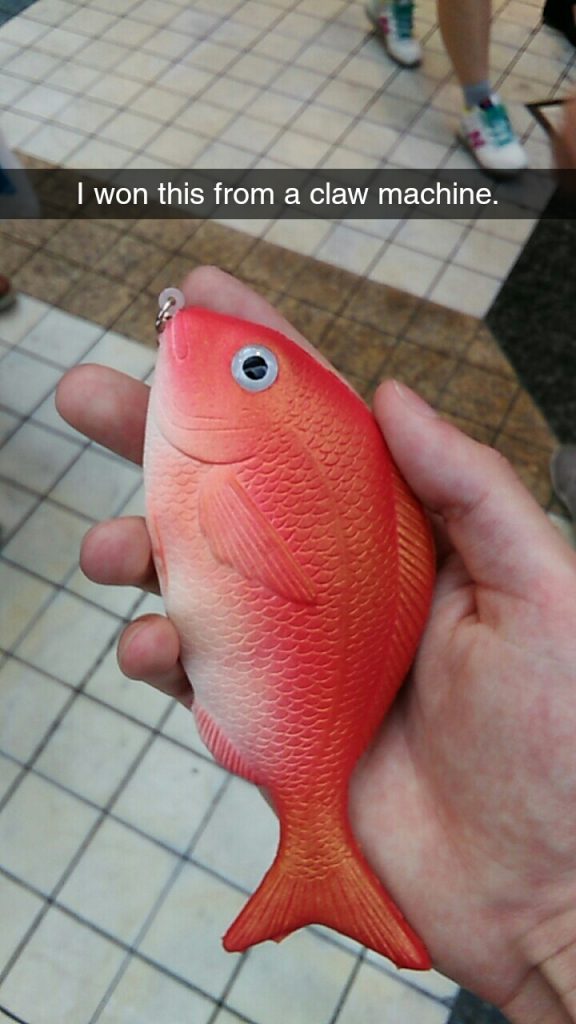 And there you have it. Eight bucks. I couldn’t help it. The toy was practically teasing me, the way it barely hung from the ledge, just waiting to be pushed into the prize slot by the next person to stroll along. After already feeding the machine about three bucks, I made the decision then and there that I was in too deep, and that I was going to win this fish and take him home, no matter the cost. Like Hemingway’s Old Man at sea, I dropped my bag down, dug into my pocket for the last of my change, and spent the next 6 and a half minutes pursuing my prized bounty. And you know what? It was worth it. It was so worth it. If not for the sake of this blog post, then for the sake of my pride. I’ve come to realize that this red snapper, with its dead googly eyes and shimmering red scales, may very well be the greatest thing I’ve acquired since coming to Japan. It’s improved my life. And every time I look at it, I’ll remember the Japanese arcades and the games that you could play and the fact that I put my heart and soul into winning a dinky keychain. Memories like that are priceless.