That’s the only word I could think of to describe my trip to Hiroshima. Thought-provoking. The study group that I came to Japan with is privileged in the fact that there are specially planned events for us to sign up for. These vary from small occasions such as shows or bus tours, and “day trips” to various museums and cities. The biggest and most anticipated trip of the semester, however, is the weekend trip to Hiroshima. Just getting to the city is an event in and of itself- buying bento boxes to eat while riding the infamous bullet train past Mount Fuji is almost memorable enough on its own. But once you arrive in Hiroshima, it’s a completely new experience. Not only did we have the privilege of getting to see the city, but also the honor of getting to hear a lecture from an actual survivor of the first atomic blast. So the trip was quite an eventful and memorable one to say the least. Today, the city is completely new, rebuilt after the war into a bustling and cheerful town. There is an outdoor mall with all sorts of fun shops and restaurants. Cartoon characters like Goku and Pikachu grace the posters and store windows. It was in no way gloomy or depressing- the sun was shining, birds were chasing each other across the sky, and kids were running around with their parents playing tag. It’s a refreshing thing to see, especially considering what had occurred here so many years ago- but its inhabitants also do a good job of making sure the past is never forgotten.

Hiroshima’s outdoor mall, a fun and entertaining maze of stores and restaurants.

Hiroshima, while peaceful and mostly untroubled today, has a permanent scar as “the city that blew up”- a rather gloomy association that will stick with it forever. To be in the city and to see it- and I mean to really see it- is a surreal feeling. I am no stranger to World War II, the Manhattan Project, atomic bombs, or the impact that they had on the world. But arriving in Hiroshima, riding its trolley cars, walking its streets, and standing at the hypocenter where the bomb went off causes you to think back to what it must have been like all those years ago. You’re walking through a city that was once, quite literally, wiped off the map. All its history and artifacts gone with the snap of a finger, and no warning or hint that it was going to occur. The fact that it also happened in the morning- 8:15 a.m.- is especially eerie to think about. Some people might have still been asleep for all I know. In that regard, it’s strange to visit an area and know that so many people died in the very spot where you stand. They were cheated out of a life. But meanwhile, here you are, visiting as a tourist and complaining about petty things like the fact that they put too much ketchup on your burger at McDonald’s. 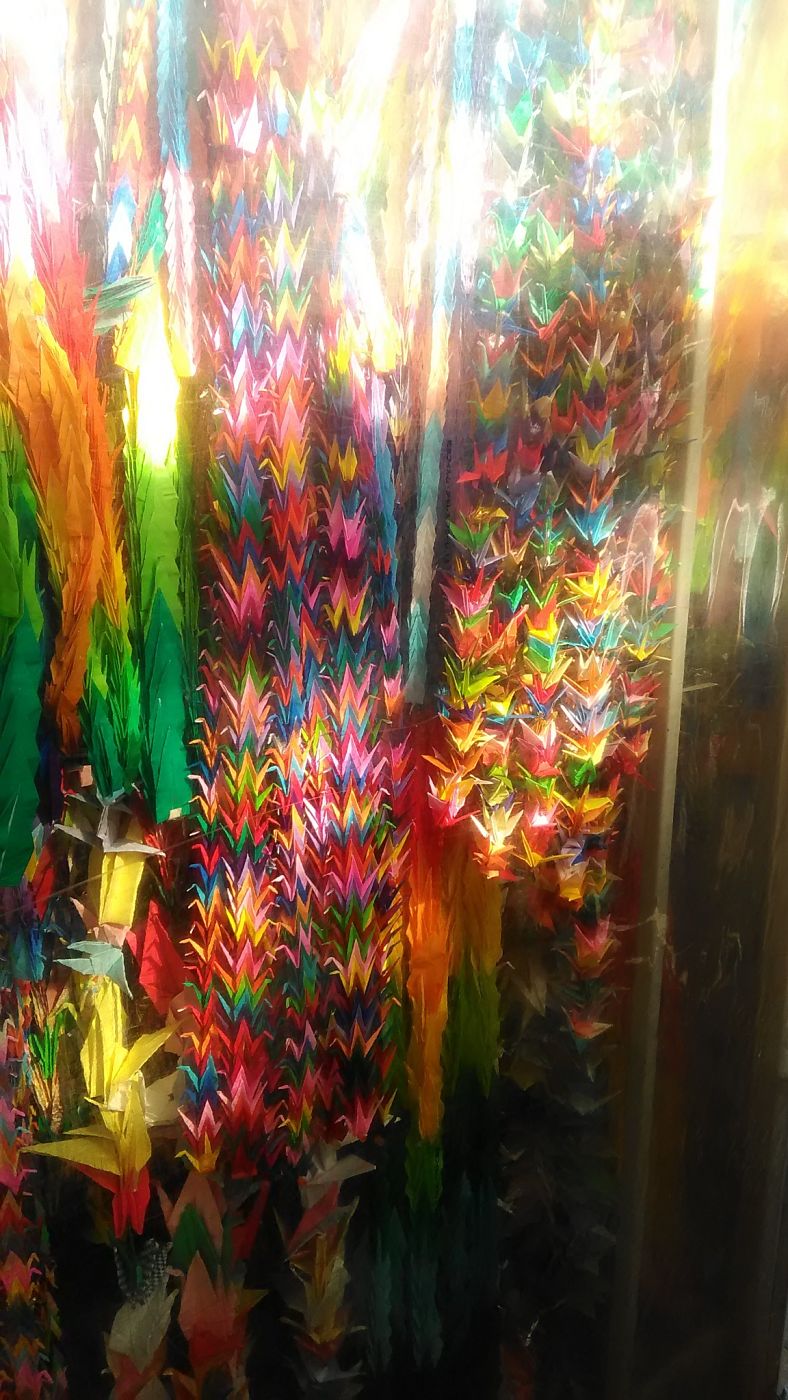 Some of the many paper cranes at Hiroshima’s Children’s Peace Monument. 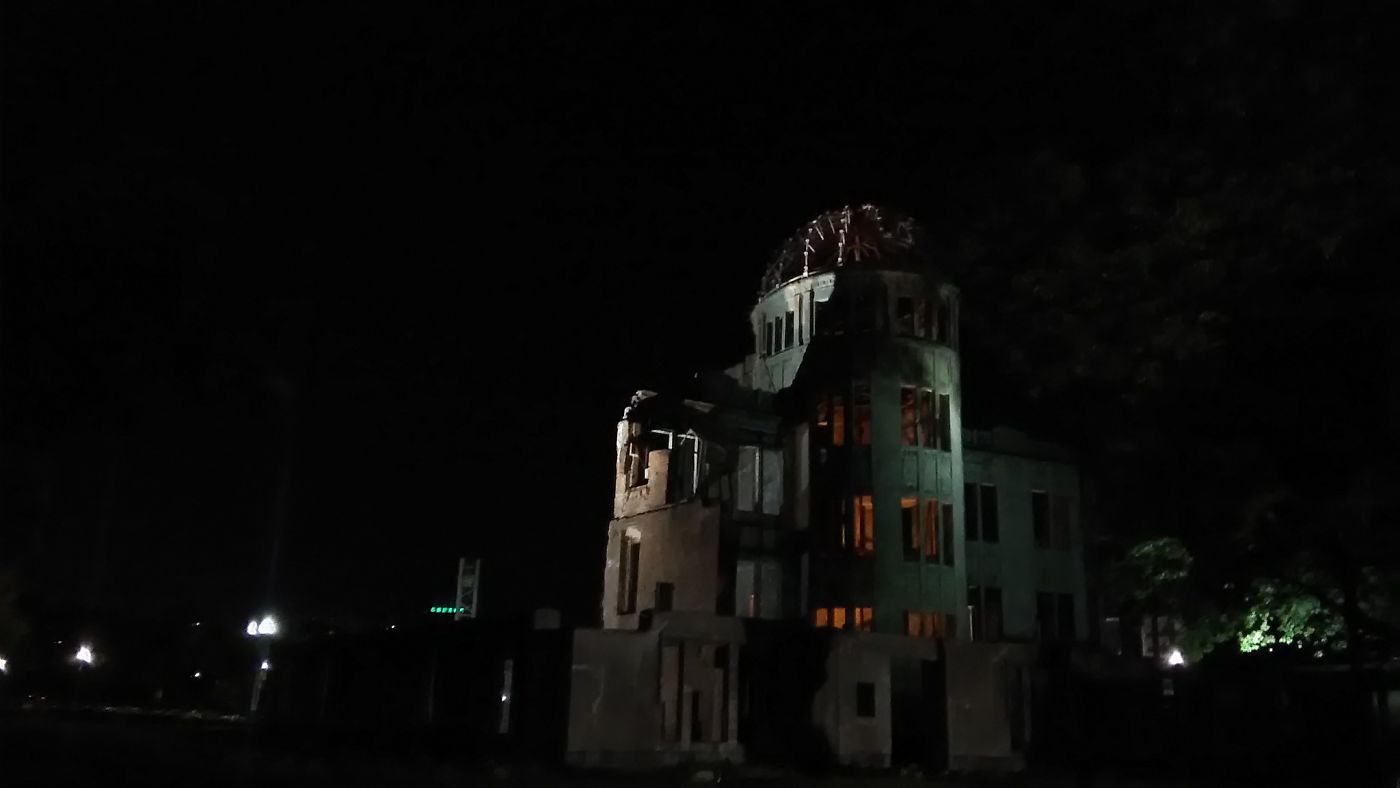 The Atomic Bomb Dome, a structure that survived the atomic blast but was kept as a memorial.

Seeing what people went through and what was left over, such as the Atomic Bomb Dome (a concrete structure that survived the blast but was left as-is and converted into a memorial) or the colorful paper cranes that people leave behind, really gets you to think about the wider scope of things in life. The survivor that spoke about her experiences was incredibly welcoming and delighted that so many students were interested in what she had to say. Before we left the lecture hall, she gave sage advice to take back with us- the importance of living long and happy lives, remembering the impact of the war and what nuclear weapons can do, and not taking anything for granted. It was a lot to take back with me. In that regard, I would argue that Hiroshima, while somewhat of an emotional visit for some, is an important one if you ever get the chance to visit Japan. It’s important to not forget what happened here, but to also have a respect and appreciation for what you have.

I never thought I’d get an opportunity like that.