Hello everyone! I’m back after another action packed week with the family. After such a fantastic weekend in Cataluña, I was ready to relax for a little in Madrid before doing it all again. While I had classes and homework during the week, my family was going on day trips to nearby cities. As much as I would have loved to tag along, school always comes first. I did have some free time throughout the week which we spent exploring Madrid enjoying the culture and of course, showing my brothers why Madrid’s nightlife is so famous. Then, when Friday morning came around, we embarked on our journey to the south of Spain. 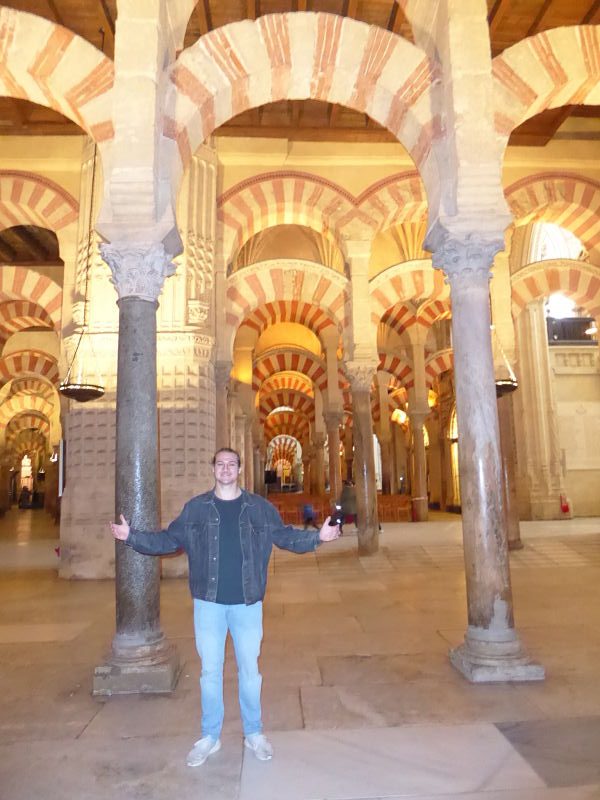 Inside the Mezquita de Cordoba

Early Friday morning we packed up the rental car and took off for Cordoba. If you don’t know, Cordoba was once the Caliphate of the Muslim empire from 929 to 1031, and at one point Europe’s largest city with a hefty 500,000 inhabitants. It was miles ahead of other cities in terms of technology, with illuminated streets and fresh running water. Every corner we turned there was another historic cite to admire, but the Mezquita is no doubt the most impressive attraction. The Mezquita de Cordoba is a mosque that was built during the Muslim rule in Spain, and later during the Christian Reconquista, a roman-catholic cathedral was built right in the middle of it. It is truly an incredible sight to see. When you first enter, there is a large open space with a sea of arches dancing above you. It was very dark since there wasn’t much natural lighting, which was traditional in mosques. As I walked around the mosque, I couldn’t help but notice the fact that right in the middle of the building there was plenty of light. Intrigued, I walked over to find myself standing inside of a traditional cathedral, and let me tell you that the change in scenery was crazy. The cathedral was so white and open, filled with traditional catholic paintings and natural light sources, creating a completely contrasting vibe from the mosque. Although the contrast between the two was eye catching, what interested me the most was the fact that two separate religions could share such a sacred building. During the Christian Reconquista, mosques were usually destroyed with the rest of the city, but the Mezquita of Cordoba was so beautiful that instead of burning it down, they conquered it and built their church inside of it. I have never seen anything like this before. I was so fascinated by it that I am going to write my final paper for my history class about how the architecture in medieval Spain was a prime contributor to Convivencia between religions. Once we left the Mezquita, we spent the afternoon walking around the city. I kept thinking about how historic this place was and the impact it had on the development of Spain and how fortunate I was to be able to enjoy it with my family by my side. 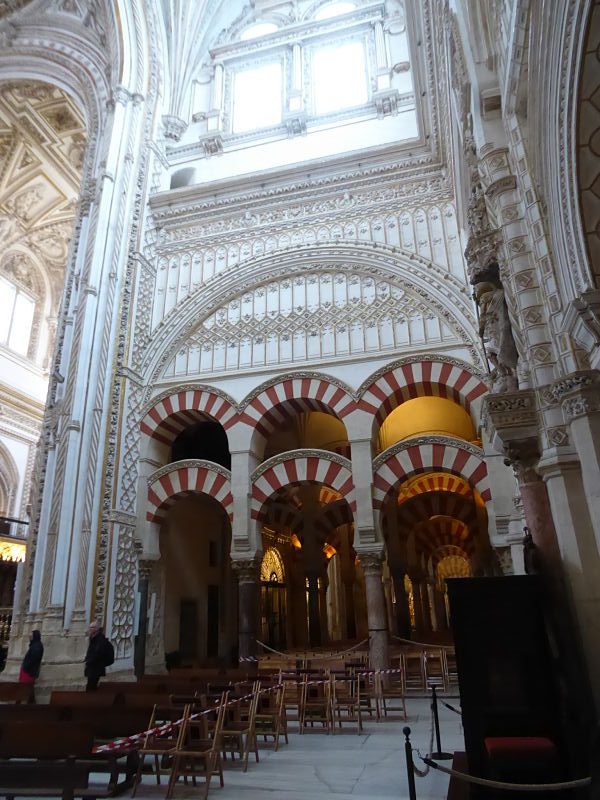 Contrast between cathedral and mosque

We had an early dinner that night to gear up for our big day in Seville. After a very early wakeup call from pops, we packed up the car again and headed for Seville. Besides the fact that Seville is one of the most beautiful and historic cities in Spain, we were all excited since we had tickets to see Seville play Valencia. Those reading who are fans of soccer know that these are two of the best teams in Spain and that we were in for a show. 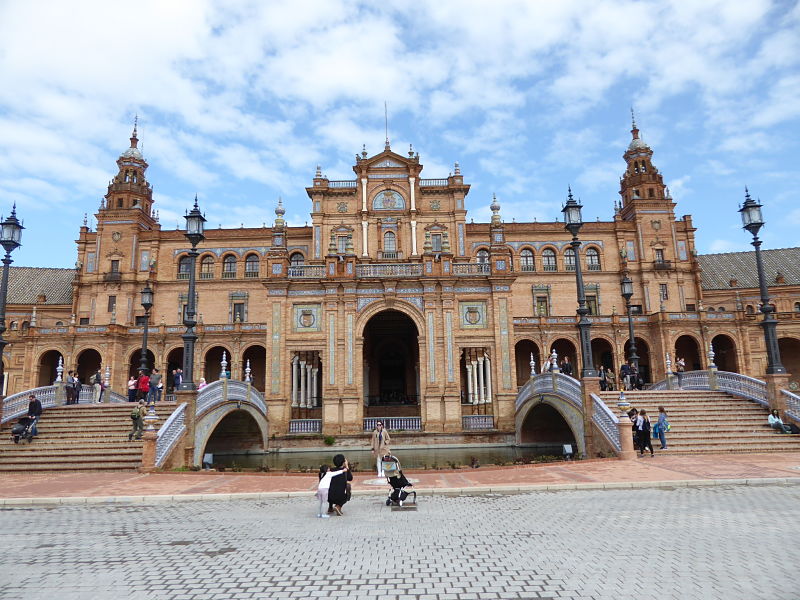 We had some time to kill before kick-off, and lucky enough there was some pretty cool sites to see. We were limited on time so had a little self-guided walking tour through the historic part of the city. My favorite stop on our mini tour was Plaza de España. This is one of the prettiest spots in the city, and is so elegant that it was used for a scene in Star Wars! 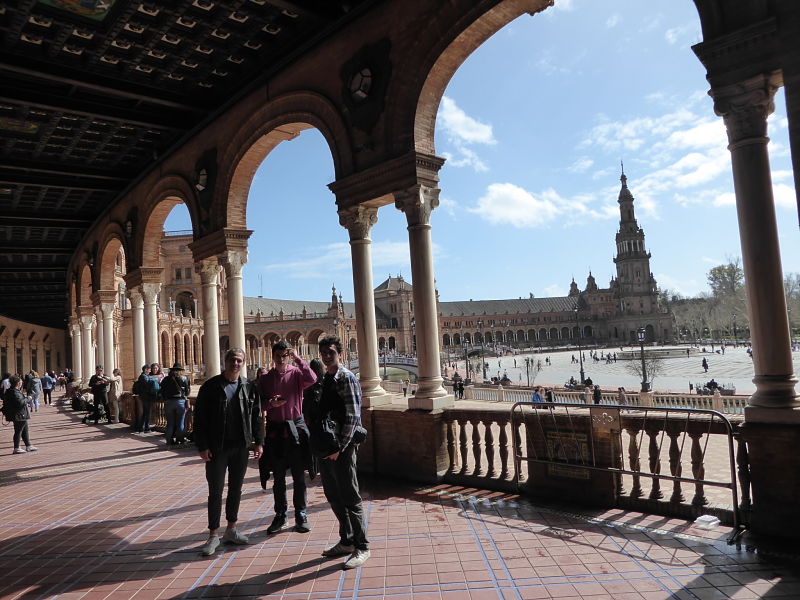 From there we made our way to the stadium. Since its been a while since I’ve written about soccer, I’ll give a nice little recap of my experience at this new stadium. 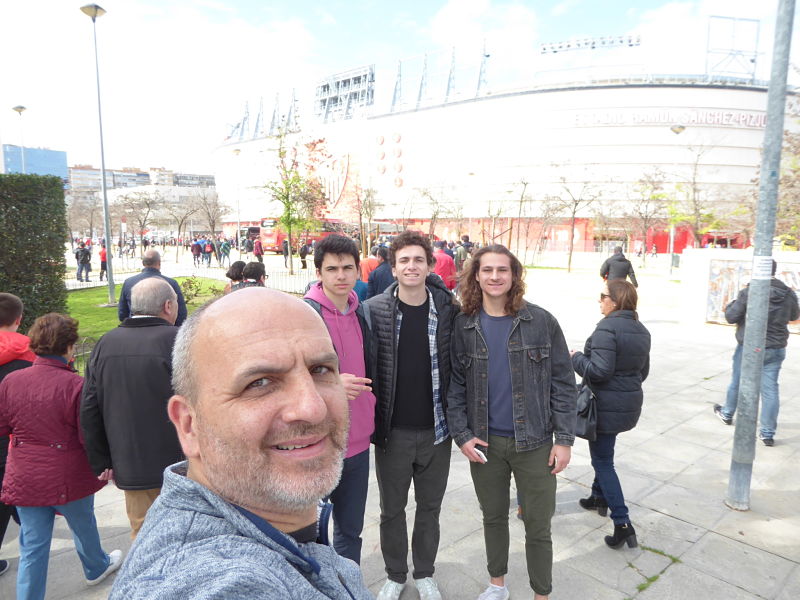 Outside the Ramón Sánchez Pizjuán Stadium

Unlike the other games I had been too so far on this trip, I knew this one was going to be special. First, I was with my brothers and my dad, and let me tell you that there is nobody else in the entire world that I would rather watch a game with then them. Secondly, I was going to experience a completely different atmosphere compared to the games I had been to in Madrid and Barcelona. Unlike those teams, Seville is a much more local club with a very passionate fan base. Actually, passionate is an understatement. These people were absolutely head over heels in love with this team. Before the game, they played Seville’s anthem. The stadium only played one verse, and when the music cut off, the entire stadium stayed on their feet and proceeded to sing the rest of the song acapella. I had goosebumps. I have been to many soccer games and seen videos of fans doing this before on the internet, but experiencing this in person was a sensation I had never felt before, for those two minutes I was a Sevilla fan. The fans kept their level of support throughout the entire game. Every time the ref would make a bad call, everyone would rise to their feet and scream every insult you could ever imagine at the poor guy. They kept cheering their team on, but unfortunately, Valencia struck first. This was my favorite moment of the game because after about ten or fifteen seconds of silence, the entire stadium began cheering their team on, letting them know that they were still behind them no matter what. You can tell that this inspired the players but unfortunately they weren’t able to equalize before halftime. Sevilla battled to equal the score in the second half, but simply couldn’t find the back of the net. Valencia eventually doubled their lead, and were simply the better team that day. They closed out the game, and even though Sevilla lost, they were once again shown undying support from the fans. They chanted a song saying that no matter what, they would support the team and that it was time to focus on the next game. Even though the home team lost, I left the stadium with a huge smile on my face. I had just watched one of, if not the best, live game of soccer in my life so far, and had my family right there next to me the entire time. Moments like those are ones I will never forget. 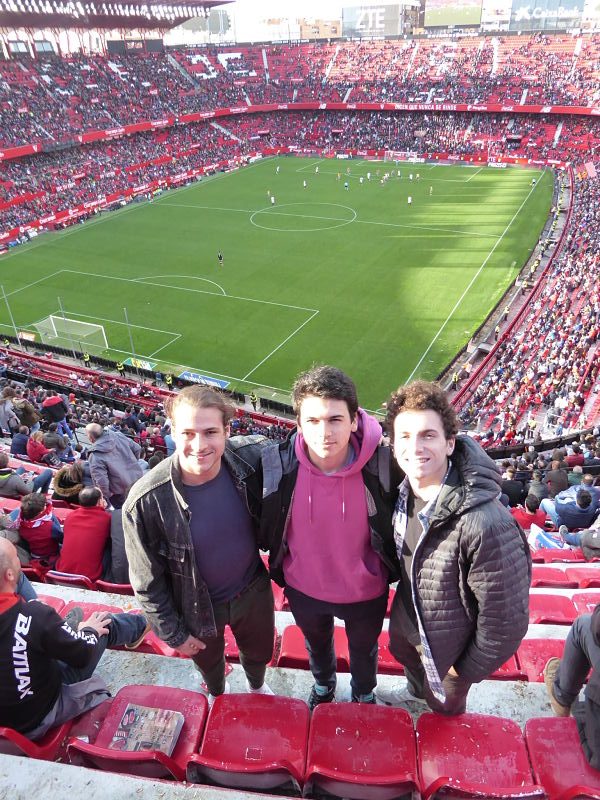 Inside the Ramón Sánchez Pizjuán Stadium

That night, we ended up going out with the older man who checked us into our Airbnb, who took us to his private club and bought us a very nice dinner. Once we were fed and well rested, we took off for Granada. The main attraction in Granada is the Alhambra, which is a royal palace with incredible designs and artwork on the inside. Unfortunately, we were not able to get tickets, which really dampened the mood for the day. We decided to not let that ruin what could otherwise be a great day and had another self-guided tour of the city. It was cold and rainy so we kept ducking in and out of coffee shops for shelter and fantastic little coffee’s to keep us going. Eventually we decided that it was time to head back to Madrid. We packed up the rental one last time and hit the road. 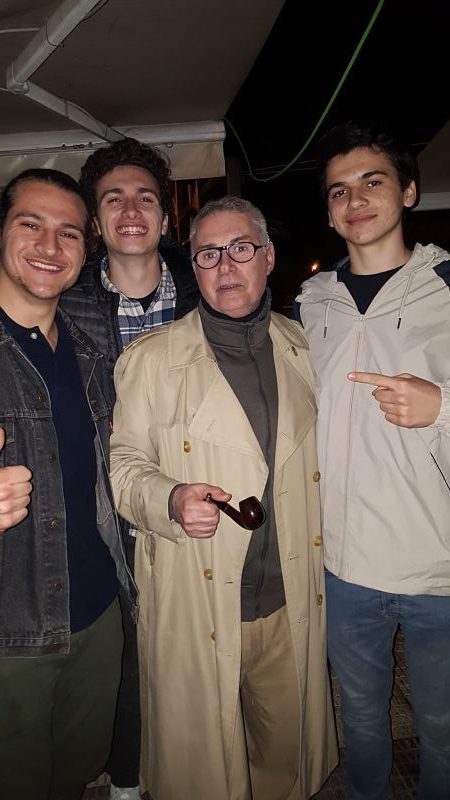 Night out with Don Fernando

Being so far from my family has only showed me how close we really are. My two younger brothers are my best friends, and it was such a great feeling to travel around Spain with them. Hearing about how well they’re both doing back home only inspired me to keep working hard here. I hope that they are able to have a study abroad experience like me in a cool country so I can go visit them later, but they are both much smarter than I am so I’m sure they will. On our long car rides my dad and I had some great conversations about life. He always gives me the best advice, to follow my heart, find something I love doing, and then give it 110%.  It was hard to say bye to them, but my mom is coming on Monday with my grandma, and we have some big things planned, so stay tuned for that! 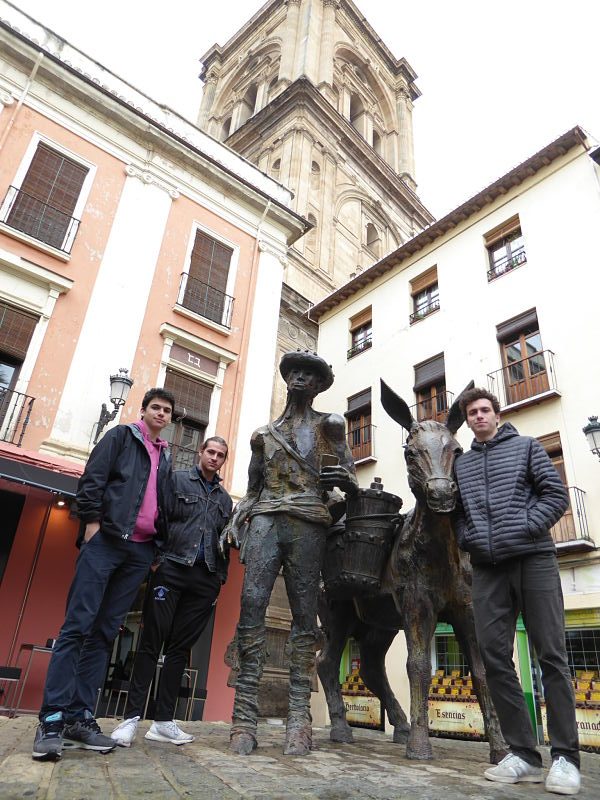