I got an email from the Embassy of Czech Republic in Washington D.C. It highlighted that my visa is now ready. I was super excited to hear good news and I really needed it. Now I can worry less and enjoy my stay in Prague.

I emailed the news to my advisers in Prague to figure out what I should do next since now I must send my passport back to the U.S. I thought this was going to be an easy process and boy let me tell you, it was not. My adviser explained to me the process of sending it back and how much it was going to cost. The amount of information that I was getting was making things overwhelming for me and even more stressed out about things that I shouldn’t be stressing about. I’m also so used to my adviser helping me through every step of the way and I didn’t really get that much here in this case.

It’s like I am fending for myself. I know I am nineteen years old and an adult, I need to be doing things by myself, but I am just not that secure to do that, yet. I guess I should fix that and stop stressing about the little things. This put a drain on my plans; a bunch of students and I were going to take a trip to Budapest and it is scary because what if the passport doesn’t come back in time for my first trip? I will miss out on a lot and I would be the only one in Prague for the weekend.

I went to dinner with a bunch of classmates and we all went to a Czech Restaurants and this was the first time I tried Czech food. I had bread dumplings with tomato sauce. It was so delicious, and it tasted like an authentic home cook meal. It made me feel right at home. I guess this food has that kind of effect on people; it’s good to come home from the cold and eat a nice tasty meal. Czech people usually have their meal with a side of beer. Their beer is known for being a little classier with a different scale to measure them and, in general, very sweet. I’m not much of a beer person; I am more of how you say a wine person. Hahaha but I will give it to them: their beer is pretty great and better than American beer. 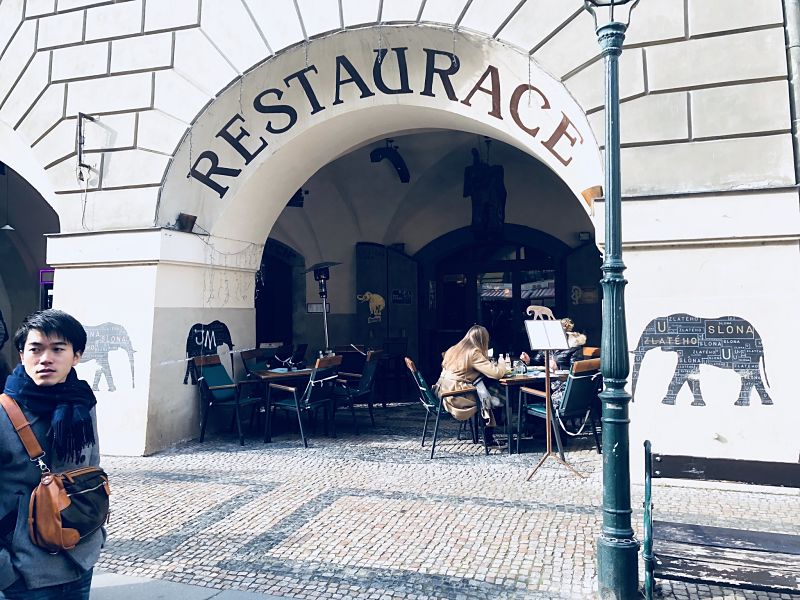 Getting some Czech food

The bread dumplings were so warm and soft; it was so good, that you can almost eat it without anything else on it or even added to it. The tomato sauce was really good, and the servers claimed that it was the hottest and spicy sauce out there. I explained to them that I like my food spicy and hot, so this was not a challenge for me. Later on, that night, I was out with my friends when some Belgian girls saw us, and they noticed us because of our accents. They were only in Prague for a small break but one of them, Gisele, said that she will be studying her Masters in Charles University during the fall semester. We exchanged numbers because she wanted tips and advice for when she moves to Prague. She also talked to me about her life in Belgium and I also explained that I had visited in Belgium and the Netherlands a couple of years ago. We had a brief conversation about the differences between Belgium and The Netherlands. It encourages me to go visited those countries again and she even invited me to visit her.

Anyways, until next time.