So remember last post when I said that I would go more in depth into going to games here in Spain? Well if you were dying to hear about it like I imagine you all were, you’re in luck because now’s that time. My whole life I’ve been going to see live soccer games. I still remember the first time I went to a DC United game with my dad for the first time. The grass was so green and vibrant under the lights, and the players on the field looked like superheroes. When DC scored, I was showered with beer and hugging random strangers. I was hooked. For many years, all I knew was DC games. Eventually I was fortunate enough to see Barcelona and some other teams from Europe play in the US, but they were on their summer pre-season tours so the intensity was never the same. I wanted to see a game in Europe that meant something, where there was something to play for and the players would leave it all on the field. I have been very lucky to get to experience that first hand, and it was sensational. I went to go see Atletico Madrid versus Seville for the first leg of the quarter-final for the Copa Del Rey. These were two of the top teams in Spain battling it out, and it did not disappoint. So here is my experience at the game, and for reference I will compare it to my experiences at DC United games.

Getting to the game was pretty standard, most people go to the game by metro. The stadium is far from the city center and closer to the airport, and there is a stop that opens up just for game days! There is also a bus that is only available on game days as well. This is so cool to me that there is a station only for soccer games, it shows the passion the people here have for the game. After the game, the metro is free and there are so many people that they just open the gates and let them pass through. In DC, most people drive to the games. Tailgating is a huge tradition in the United States where fans drive to the game very early to drink and eat together in the parking lot before the game. This is not the case in Spain. In DC, a fair amount of people take the metro to the game too, but they are not let in for free.

The atmosphere at the Atletico Madrid game was sensational. We had seats in the third row. Walking all the way down to the edge of the field was a dream come true. Everyone at the stadium was so into the game. I would compare it to going to the Theatre. The fans are very attentive and want to watch a beautiful display of football. Looking around I did not see anyone on their phones, but instead on the edge of their seats following every move of the game, whistling when there was an error and clapping when they liked what they saw. When I took my phone out to take pictures I felt as if everyone was looking at me. I looked around and realized that I was the only one doing this. Everyone’s eyes were glued to the pitch, admiring the craft of the world class players performing in front of them. It was also impressive that the stadium was nearly packed and the game was on a Wednesday night. DC United has a strong fan base, and their fan section, La Barra Brava, is very loud and supportive. The rest of the fans that attend the game are not always as into it. This does not mean that they aren’t watching and supporting, but it is not uncommon for people to be on their phones throughout the game. The stadium is also usually only half full, but in all fairness to DC, they have an outdated stadium passed down to them, and are moving into a new one next year. 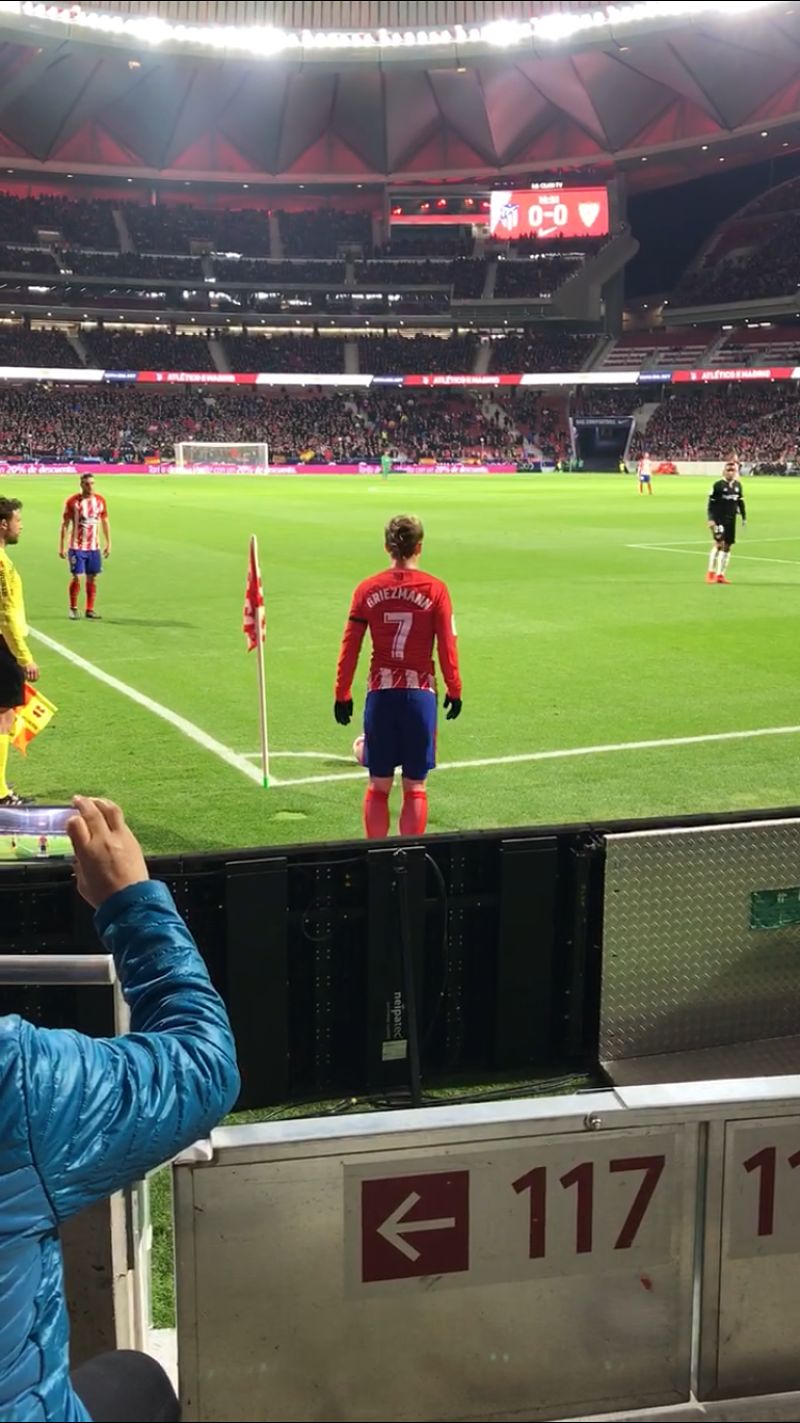 Antoine Griezmann, currently one of the best players in the world

The Atletico Madrid fans were extremely into the game. It is apparent that most people who go watch the games are true fans and care about the result. Whenever there is a nice play, the crowd applauds in approval, and when they score a goal they go absolutely nuts. What most stood out to me was how they show their disapproval, let alone the fact that they show it at all. When they do not like the way their team is playing, fans in Spain whistle very loudly. The intensity of 50,000 fans whistling in disapproval pierces your ears. If I were a player and had that many people whistling like that at me, there is no way I would make the same mistake twice. In comparison, at all the DC united games I have ever been to I have never experienced the fans show disapproval towards their team. Although that may seem like a good thing, I believe it to be one of the main reasons that the soccer culture in the US is not growing at the rate it should be. Teams and players are not held accountable for their level of performance. After suffering a loss, DC fans still clap for their team. Don’t get me wrong, you should always support your team no matter what, but holding them accountable when they are playing badly will make them play better.

In terms of actual gameplay Atletico Madrid were obviously miles ahead of DC. They have some of the world’s most talented players on their team, and are regular title contenders. The speed of play was ridiculously fast and they rarely messed up, which is probably to avoid getting whistled at. DC United on the other hand plays a much slower paced game, and mistakes are a little bit more common. This is to be expected though since they do not have the same budget as Atletico Madrid to bring in world class players.

It was incredible getting to the experience a game like that. Even though they lost in the dying minutes, it was a thriller of a match and one I will never forget. Being so close to players that I usually watch on TV every weekend was surreal. This Sunday I will be flying to Barcelona to watch my idol and childhood hero, Messi, play with FC Barcelona, and I could not be more excited. Until next time,