This weekend was like nothing I have ever experienced, it was amazing, exciting, and relaxing all at the same time. My roommate Sandy and I decided to head up to Northern Italy to do some exploring. We took a train up the coast to the home of pesto and the explorer Christopher Columbus, Genoa. It was Sandy’s idea to head to Genoa because it is where her family was from. She wanted to finally see where her ancestors were from. She headed to Genoa on Thursday and I followed on Friday. The train ride up the western coast of Italy was absolutely breathtaking. Sitting in a window seat I watched as the train sped through miles of patchwork farmlands, cut through mountains topped with pastel houses, and finally zoomed along the side of the ocean. Thanks to the stunning scenery and the second Harry Potter book, the 5 hour train ride flew by.

Sandy met me at the train station with a bright exciting smile on her face. Since she had been there that entire day she was excited to show me around the little town she had already gotten to know. It was refreshingly different than Rome. The city of Genoa was surprisingly quiet. There were no huge groups of tourists or street vendors. Just the people of Genoa going about their daily activities. 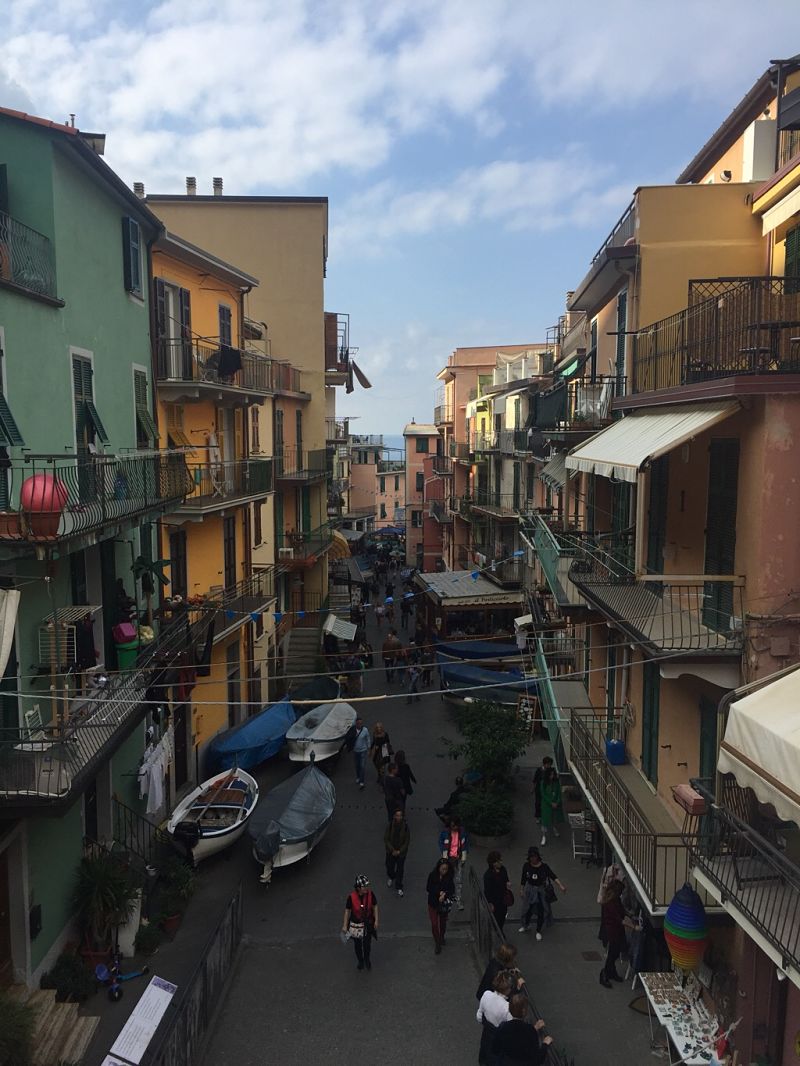 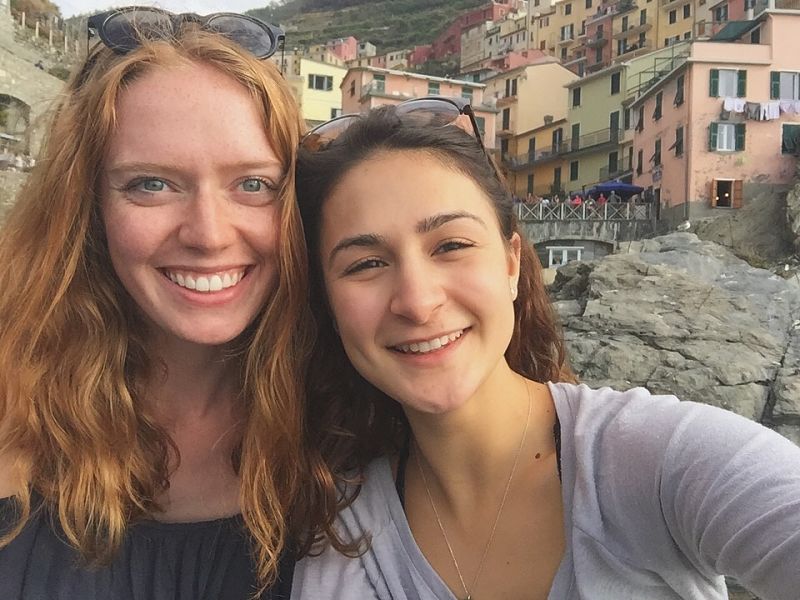 Sandy and I Sitting on the Rocks Enjoying the View

We spent our day wondering the small city. Genoa is a port city in Northern Italy, so after wondering up and down the hilly alleyways, we made our way down to the water to check out all the beautiful view. The marina was filled with huge yachts and beautiful sailboats. Palm trees lined the shore line while pastel houses framed the hills. The familiar smell of salt in the air and sound of the seagulls reminded me of home, it felt so nice being by the water again. There was a huge aquarium that I was dying to see, I had heard that it is the best aquarium in all of Europe. Amongst the sailboats and yachts there was also an extremely unusual pirate ship hanging out in the marina. 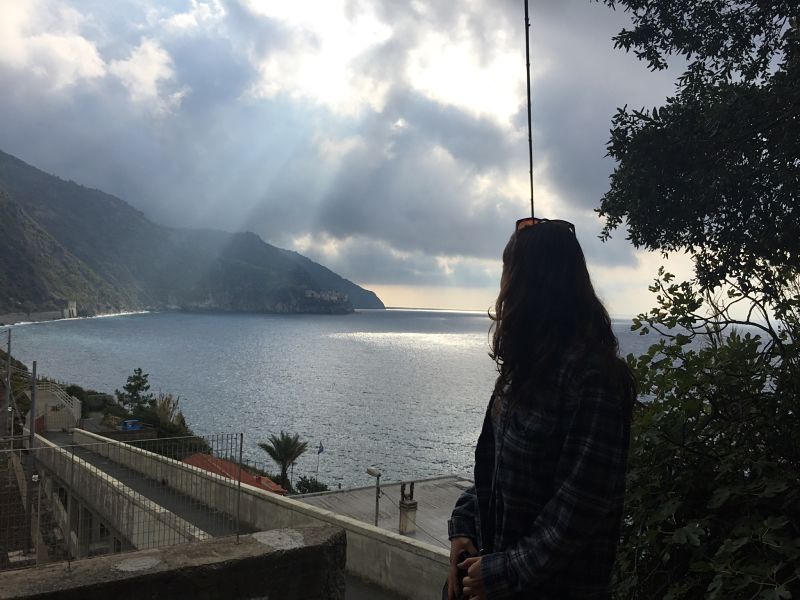 After walking about 5 miles up and down the hilly city, we made one last trek up a large hill that lead to our Airbnb. Panting and from carrying my bags up what felt like 15 flights of steps, Sandy introduced me to our host. Maria was an older Italian woman who brought Sandy and I into her home with so much love and care. She made us feel so at home. Without speaking a lick of English, she did her best to explain to us all the places we should see in Genoa. The day before she walked with Sandy to show her all the sights. I was so touched to see how welcoming and affectionate she was towards us. She put coffee on the stove every morning with toast and jam. It felt like we had our own mom during our stay in Genoa. After this experience I believe that staying in an Airbnb is the best way to see the real life of wherever you are traveling. 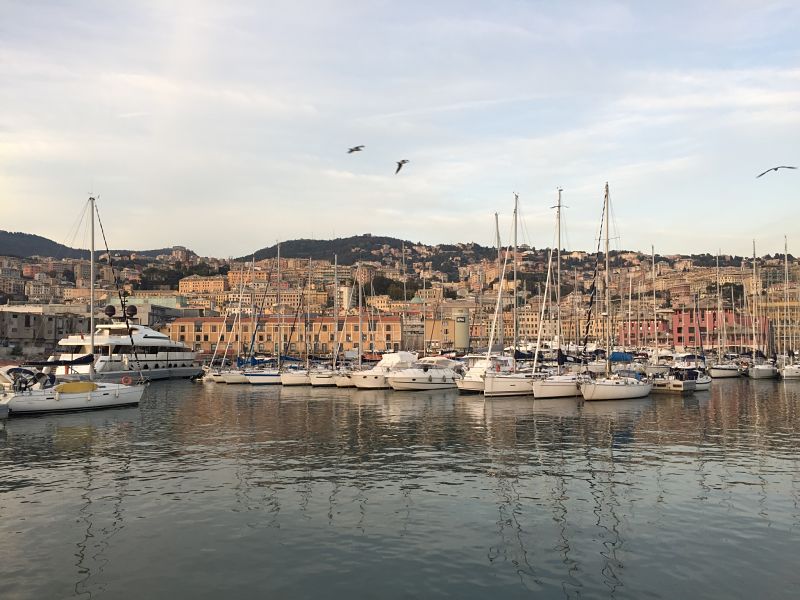 The next day we were back on a train headed to another seaside city, well five to be exact. We were on our way to Cinque Terre, the five lands. These five hilltop oceanside towns were something straight out of a movie. Words cannot even begin to describe the picturesque beauty of these towns. When we arrived at our first stop I couldn’t believe my eyes. The water was electric blue and clear as glass. The rock formations were strong and jagged. The hilltop houses were painted in pastel shades of pink, yellow, and orange. We couldn’t wipe the goofy smiles off our faces all day long. We, again, hiked up and down three of the five hilly towns. Our day consisted of hiking and staring at the view, sitting and staring at the view, and eating while staring at the view. We couldn’t soak in enough of the breathtaking vista. We were sad to see the day coming to an end and wished we had planned a longer trip. 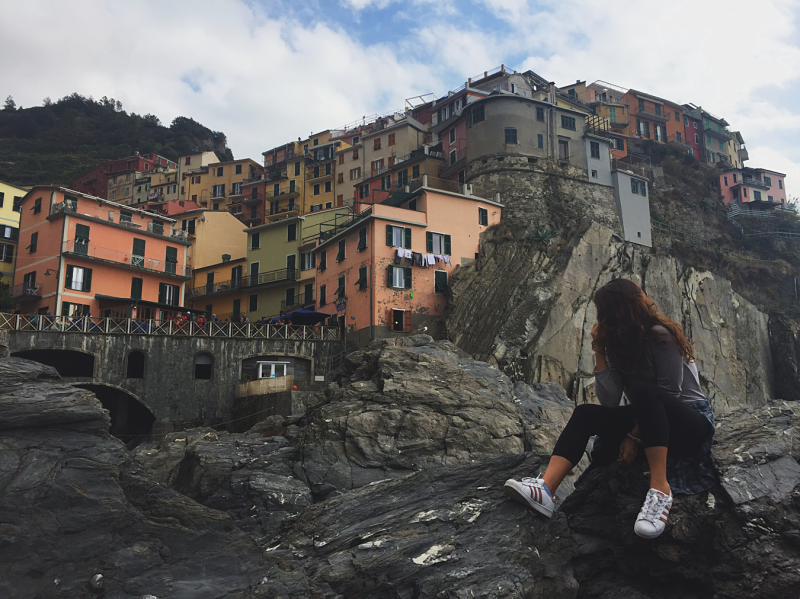 Enjoying the Beautiful View of the City 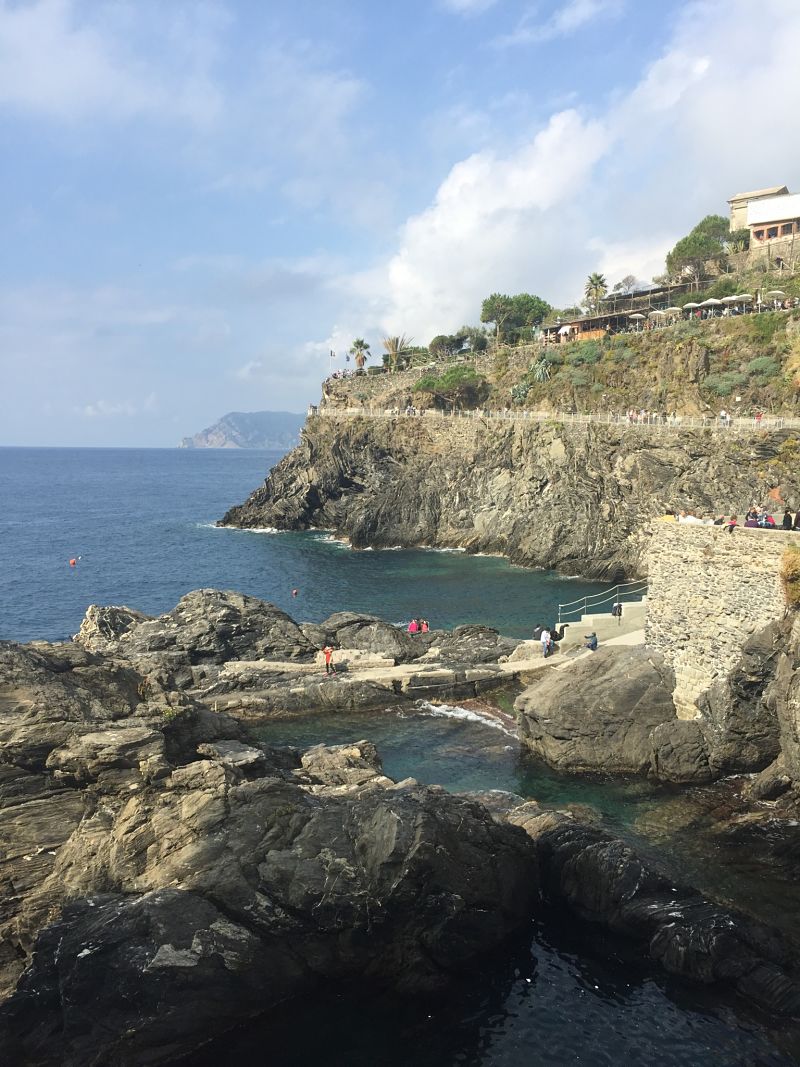 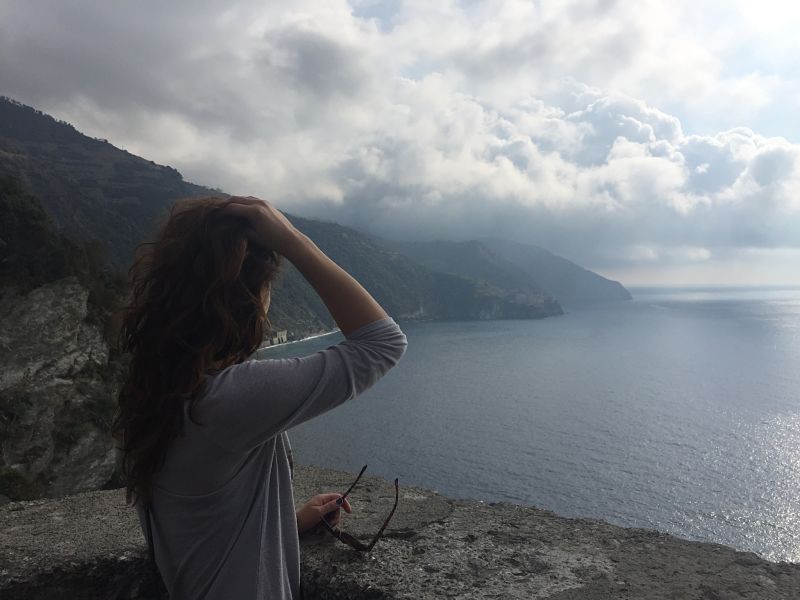 The View From After a Long Hike Up

On our last day we decided to wake up early and see Europe’s best aquarium before catching our train back home. The aquarium is located directly on the promenade. The exhibits were beautiful, and we were lucky enough to see some very active creatures that morning. We saw manatees, seals, penguins, turtles, dolphins, and that’s just to name a few. All of the habitats were big, clean, and beautiful. I was absolutely ecstatic to see that there was an entire exhibit dedicated to plastic waste in the ocean. The exhibit wasn’t fully finished yet, but it was filled with useful information about the dangerous effect plastic has on marine life. It is relieving to know that we are working hard to make positive changes regarding our impact on the environment and educating younger generations about this as well. 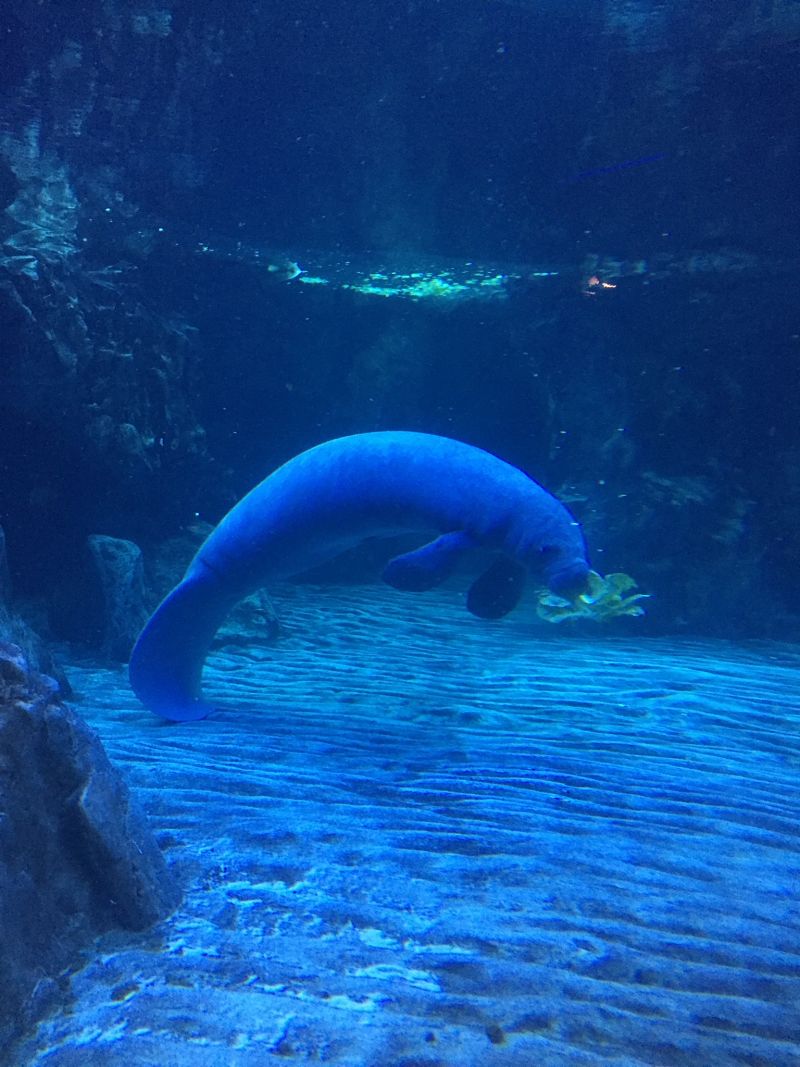 A Mannatee Eating Cabbage at the Genoa Aquarium

Getting away from Rome for a weekend was almost meditative. I felt refreshed and revived after our relaxing trip to Genoa and Cinque Terre. The short weekend was just enough to make me realize it is a place I will come back to again.

One thought on “A Trip Up the Western Coast of Italy”