When it comes to traveling abroad, I have noticed quite a few challenges that I have come to face. Some of these challenges being strikes on air lines, and even strikes on the tube. These types of strikes make it, not only difficult to travel, but sometimes impossible.

When I was looking to book flights for my upcoming fall break trip, I noticed prices were sky rocketing. The were rising by the second, and soon did I find out why. There was actually a planned strike that was going into effect starting the fall. The strike was for all cheap and affordable airlines. All of the ones in which I was hoping to fly through. The earlier prices I had seen to get to and from London, were at most fifty U.S. dollars. But, what I actually ended up having to pay was around one hundred and fifty U.S. dollars. This was shocking to me. But, I learned that the prices went up so much, due to the fact that they had barely any planes flying out, and they needed the money to keep up with their company. So, while I was still able to gain access to these cheap airlines, the prices I paid were fairly higher than normal. Something I definitely did not enjoy.

With these strikes there has also been the problem of students booking flights, just to find out they were cancelled, and they would not be getting their money back. Luckily I was booking after the strike had started, but some other students were not so lucky. These pilots and flight attendants were just cancelling their flights for the day, and leaving people with no way to their destinations. In this case, many students have been unable to travel, because they had already spent their money once on flights and did not have enough to book more. 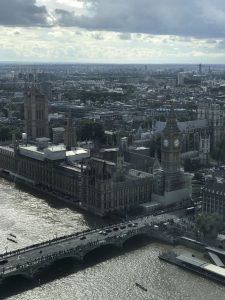 Big Ben from the London Eye

There have also been many strikes all across the U.K. that were dealing with trains. More specifically the tube. When the tube is on strike, there is a large struggle to get around the city. There is most likely only one tube running per line, and everyone fighting for a spot. The tube strikes have been happening due to the fact that they do not make enough money per year. They believe they deserve a higher pay. So, they decide to take a break for a day or two, and show how troubling it is for the citizens to get around. When comparing it to the cheaper airlines, there are many other airline alternatives to get you to your destinations quickly. So, if it were to be a necessity or emergency, you would still be able to fly somewhere. When It comes to the tube, that it the fastest form of transportation throughout the city. Without this, citizens have to turn to taxis, Ubers, and buses. This causes a lot more traffic, and makes it much more difficult for people to arrive on time to events or even work. 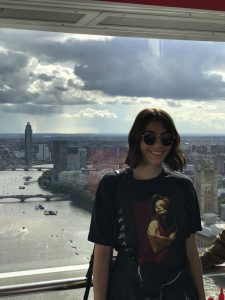 Overlooking the city of London

You may be wondering why this topic is so important to me, and that is because in order to travel around the city I have to have accessible transportation. Especially this week, when I will be heading off to a company to shadow for a day. Since the tube will be on its strike during my time of work, this will only make it more difficult to get to the places I need to be. So, it is important that I find alternate routes and schedule myself in a way in which I will not be late.

Being on your own in a big city like this, and dealing with a problem like this, allows you to gain not only a sense of direction, but a sense of maturity as well. Since I have arrive here in London, I have not only found myself adapting to situations like this daily, but maturing as well. I cannot wait to see how much more I am able to learn and grow from this amazing experience.