That’s it. In what seemed like five weeks rather than five months, my semester in Spain has come to an end. Early Friday morning, I embarked on my 28-hour journey back to Honolulu. Returning home was certainly bittersweet, as I’m always thrilled indulge in my favorite Hawaiian foods and reunite with my family and friends. However, something just didn’t feel right. Although I was technically heading home, I also felt like I was leaving home behind. Seeing the skyline of Madrid one last time as my plane took off was heart-wrenching, as I really don’t know when or if I will ever return to Spain. When you live in another city for an extended period of time, it becomes a part of you. Being abroad has taught me that I can call a city other than Honolulu home, despite the major differences between the two cultures.

During my last week in Spain, I visited Granada in Andalusia and scored a 30 Euro flight to Portugal. In Granada, my friends and I visited the Alhambra, a medieval palace that vividly reflects the Arabic influence in Spain until the end of the 15th century. I saw so many resemblances between the architecture of the Alhambra and in Morocco, a surreal comparison between two very different countries that are separated by only 9 miles of the Strait of Gibraltar. 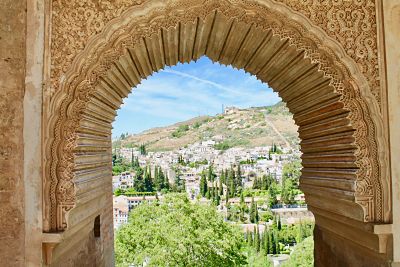 The city of Granada through the Alhambra 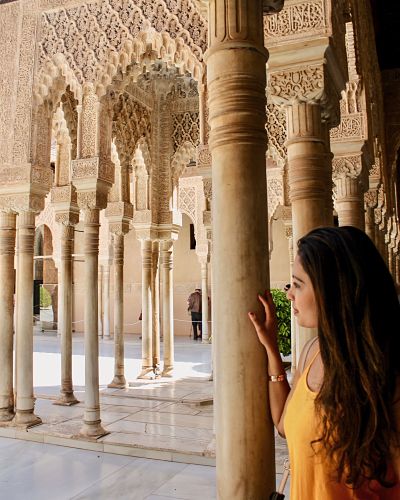 The Alhambra in Granada, Spain

I also took a day trip to the city of Porto in Portugal this week. Porto is Portugal’s second largest city after Lisbon, the capital. I am part Portuguese on my mother’s side, and there is a significant Portuguese population in Hawaii. I grew up eating Portuguese sausages and malasadas, and was thrilled to experience a firsthand account of a culture that I’d grown up with. Visiting Porto was a refreshing experience, as most of the cities that I have visited in Europe have been overwhelmingly touristy. Porto did not have nearly as many tourists as major cities like London or Madrid. It was great to visit a new city without being bombarded tour guides or dozens of souvenir shops on every block. 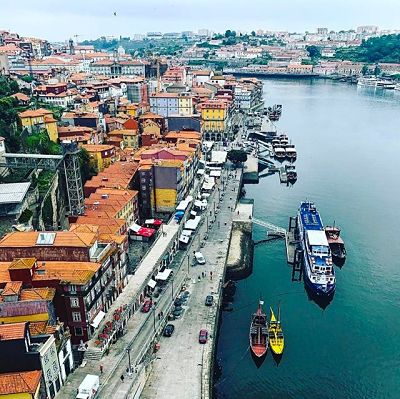 The Douro River in Porto, Portugal

My week ended with a fiesta de despedida, a farewell party with the Colombian friends that I met when I visited Morocco. We had a picnic and watched the sunset at my favorite spot in Madrid – the Egyptian Temple of Debod. We spoke to each other entirely in Spanish, which made me realize what a difference cultural and linguistic immersion made in my proficiency in Spanish. I used words that I’d overhear in other conversations or in song lyrics, rather than stressing about the direct translation from English. This is something that you simply can’t acquire in a Spanish class in the States, reaffirming the many benefits of spending a semester abroad. 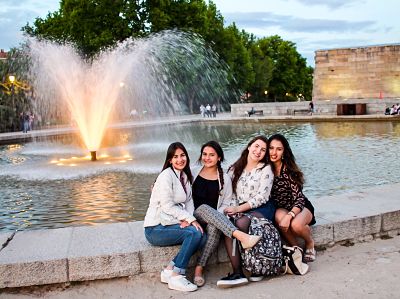 As my semester in Spain came to an end, I’ve done a lot of reflecting about how impactful the past five months have been for me. Although I have been abroad prior to visiting Spain, I had never been outside of the United States for more than a few weeks. The effects of spending five months outside of the United States didn’t really hit me until I arrived at my layover in San Francisco. It felt strange to talk to others in English without translating it to Spanish first. For the past five months, I learned how to speak to store clerks, waiters, professors, and many others solely in Spanish. Talking in English was just not an option. Overhearing many conversations in English also took me off guard. In Spain, it was difficult for me to understand conversations that I would overhear in public. Not only that, but since Madrid is a globally-centered city, it was very common to overhear conversations in many other languages as well. In a way, it was like I had been deaf for five months and finally regained by hearing upon my arrival to the States. 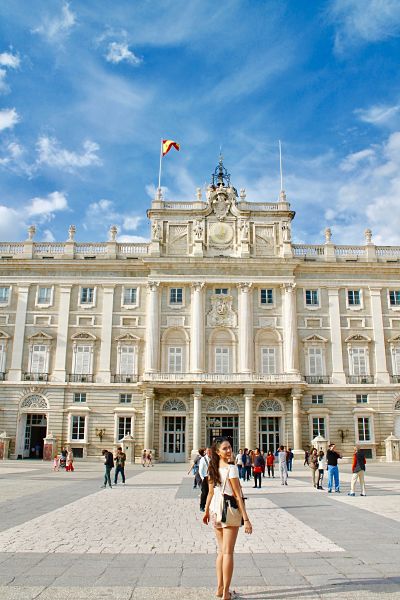 Finally visiting the inside of Palacio Real!

Throughout the semester, I’ve developed and enhanced numerous interpersonal skills with all the experiences I’ve had in Spain. My confidence has been profoundly impacted while abroad. When I’d come across something that I was initially afraid of doing, I would tell myself, “I’m only in Spain for a semester, so why not?” I was indebted to myself in making my semester abroad worthwhile and not take anything for granted. Looking back, my favorite experiences this semester was not necessarily seeing the Big Ben or Palacio Real — it was making decisions that I’d originally been afraid to do to but did so anyway, such as traveling to Ireland and Portugal on my own, registering for Latin Dance, and teaching ESL. It is in these moments where I have made mistakes along the way and learned from them, allowing me to grow tremendously and apply these lessons to future circumstances. Fear is the biggest obstacle that holds us back from pursuing our dreams. However, overtime I’ve learned to not be afraid of making mistakes and take risks when appropriate. It is in these choices where I’ve grown the most, regardless of the outcome. While abroad, I realized that being in Spain shouldn’t compel me from living my life to the fullest back in the States. I’ve learned to live vicariously, abandoning set schedules and to-do lists and just living life in the moment. My favorite trips this semester, such as visiting Budapest with a new group of friends and booking a last-minute trip to Valencia are some of the most memorable, which were spontaneously planned without much expectations.

In relation to becoming more self-confident, I’ve also become more independent while living abroad. I never thought I’d be able to visit other countries without knowing the native language or file a police report entirely in Spanish. You really don’t know what being alone feels like unless you’ve lived in a foreign country with only yourself to rely on. These experiences have taught me creative ways to deal with challenges, and made me realize that if I could overcome something abroad, then I could most certainly overcome it back in the States. I’ve also learned how to manage my money quite well and learned to cook through trial and error. These are skills that you simply can’t learn from a textbook, but only through experience.

This leads me to my next point – spending this semester abroad has taught me so much about myself and many lifelong skills without stepping foot in a lecture hall. I initially decided to study abroad in Spain because I wanted to improve my Spanish. I’ve realized that you can attempt to learn Spanish for years in an American school as I did, but nothing compares to the value of cultural and linguistic immersion. This semester, I’ve learned more about myself through interacting with people around the world than sitting in a classroom. I’m now more aware about of how the United States is perceived from a Greek, Moroccan, Spanish, French, and many other perspectives. I’ve also come to understand the value of experiences over materialistic items. I’ve heard many people say that studying abroad is too expensive, yet they don’t think twice before purchasing a designer handbag or the latest iPhone. Overtime, these materialistic things lose value, but the experiences we have never do. Buying things for ourselves initially makes us happy, but as we adapt to them, they become less valuable. I’ve never once regretted splurging on a trip I’ve taken, but have often reprimanded myself for spending 50 Euros at Primark for clothes that are now sitting at the bottom of my closet. The value of making memories and taking advantage of a new opportunity is incomparable to owning the latest technology or fashions. Our experiences are what defines us, not our BMW or Louis Vuitton purse. 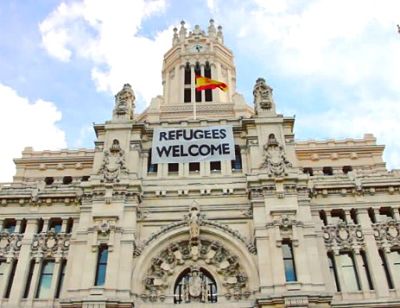 At Plaza de Cibeles — just another reason to love Spain!

In addition, semester abroad has left me addicted – no, not to paella, but to traveling itself. Acquiring new stamps in my passport and purchasing flights gives me a rush that is incomparable to any other feeling. During my last week in Spain, one of my most major concerns about returning to the U.S. was being bored with my life back home. I can no longer take spontaneous weekend trips to foreign countries or easily meet people around the world. I’m also unaware of when I will have the opportunity to go abroad again. I’ll be starting my junior year of college next semester, and the next two years will be dedicated to establishing my career and taking courses for my major. The thought of not being abroad again for many years is my worst nightmare. I am also worried about being around those who may not understand how transformative this experience has been for me. I have many friends and family members who have never left the United States and have no desire to. It frustrates me when people fail to understand the importance of cultural immersion and stepping out of your comfort zone. However, I am looking forward to sharing my memories and photos with those who have supported me from day one.

Finally, being abroad has also taught me that home is a state of mind, not necessarily a place. Throughout my travels, there were numerous instances where I referred to Madrid as home, and not Honolulu. Spending a semester in a foreign country will teach you that you can belong to numerous communities in your life, and “home” does not necessarily have to refer to a single place. A part of me is embedded in the Hawaiian culture, and now, the Spanish culture as well. There is no turning back after a semester abroad. The lessons, experiences, and friendships you’ll make are priceless. Upon my return to the United States, I was surprised that nothing has really changed back home, whereas I’ve changed tremendously in the same amount of time. In five months, I’ve visited six more countries, seen an entirely new continent, completed 40 hours of community service, and have met people from nearly every corner of the globe, from Alaska to Lichtenstein and everything in between. 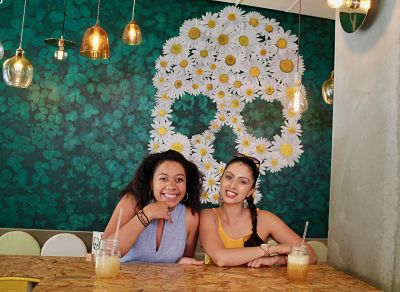 How lucky am I to have spent the semester abroad with my best friend?!

I couldn’t end the semester without offering gratitude to those who have made this experience possible for me and who have contributed to my personal growth. A huge thank you to my parents for their unconditional love and encouragement through it all. Thank you to my best friend Carla, for being my personal translator and for accompanying me on this adventure of a lifetime. Thank you Alex, for an incredible ESL semester and for teaching me that the only opinion that matters is my own. Thank you Maria Alejandra x2, for being so welcoming and for all of the memories in Morocco. Last but certainly not least, I am eternally grateful for all of the support that I have received from Center for Global Education at Marymount University – from the second I expressed an interest in pursuing a semester abroad until my arrival back to the States. I couldn’t have done it without any one of you!