Spring in Sevilla, Spain is undoubtedly a sensational experience. The city was literally blooming – with vibrant flowers growing alongside pastel-colored buildings and the carefree attitude of its people. The Andalucía region of Spain has a completely different lifestyle than Madrid. Andalucía is best known for its rich Spanish culture, most especially bullfighting, flamenco, art, and raw passion. It has a more laid-back atmosphere that still partakes in siestas and has a nightlife that typically lasts until dawn. 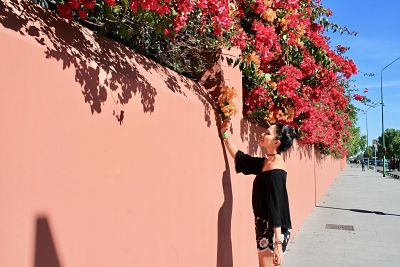 In Sevilla, my friends and I attended the city’s iconic Fería de Abril. We attended the fair on its last day of operation, so it was naturally packed with people from all over the country. The fair is divided into two distinct parts – the carnival that is equivalent to those in the States and the casetas (booths), which families, friends, businesses, and political associations can rent during the fair. In the booths, people celebrate the occasion by eating, drinking, and dancing to traditional Spanish music until 3 AM.

As soon as we arrived, we immediately realized that we were SO under-dressed for the occasion. Spanish women of all ages were decorated in traditional flamenco dresses, roses in their hair, and extravagant jewelry. In addition, men wore elegant suits topped with wide-brimmed hats. Horses pulled carriages filled with people of all ages enjoying the company and Sevilla’s warm climate. 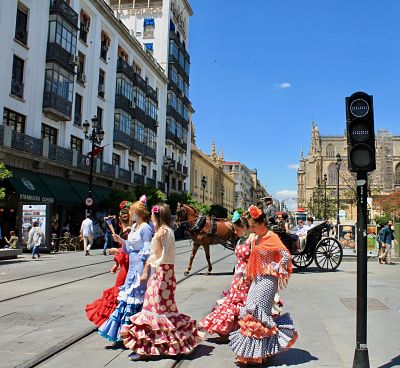 During the festival, my friends and I munched on some tapas, rode some carnival rides, and visited a public caseta, where we danced to reggaeton until our legs were numb. At the festival, we noted some of eminent differences between Spanish and American culture that we observed. I noticed that people in the casetas were truly enjoying the company of their friends and family, rather than the company of their electronics. Kids mirrored their parents by dancing alongside them in traditional outfits, rather than being sectioned off by themselves. While eating dinner at a restaurant near the fair, we saw a customer that had accidentally hit her head on a lamp hanging above her table, but instead of cursing at the waitress or threatening to sue the restaurant, she laughed it off with her friends and continued eating as if nothing happened. Furthermore, we noticed that the waiters at the restaurant did not rush us out as soon as we’d finished eating, even though there were dozens of people still waiting to be seated. In fact, we actually struggled to get the waiter’s attention to bring the check over. We were surprised that we been at the restaurant from 8:30 to 11pm, which didn’t bother us at all since we had been enjoying each other’s company and the food so much. In the U.S., my friends and family rarely spend more than an hour at a restaurant, as it seems like there’s always something that needs to be done immediately after. However, after living in Spain for five months, I’ve definitely learned about the importance of taking one’s time and enjoying the company of others, something that I often disregarded in the States. 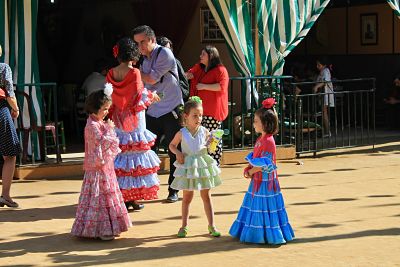 ​Spaniards of all ages partaking in the festivities of Fería de Abril! 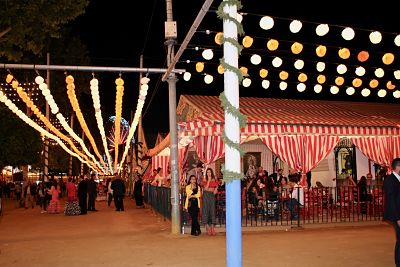 Attending festivals in Spain has truly allowed me to completely absorb the Spanish culture, whether it’s through the sounds of Spanish music, smells of freshly baked churros, or while watching people break out into flamenco along the streets. I would strongly advise anyone going abroad to not only visit the country’s most famous monuments, but also engage in a cultural event or festival. While visiting Spain’s most renowned landmarks such as Palacio Real or Plaza Mayor allows foreigners to acquire an understanding of Spanish history, these sites are often overcrowded with tourists and are not as culturally immersive. Attending both Las Fallas in Valencia and Fería de Abril provided me with a genuine experience of Spanish culture, one that I would’ve never been exposed to if I’d only visited the most touristy areas. It was quite rare to see foreigners at either of these festivals, which had been refreshing since it prevented too much commercialization and overcrowding. It had felt like I was truly apart of the celebration rather than a just spectator, which truly made it an authentic experience for me. 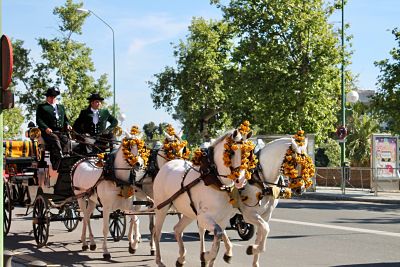