With just two weeks left before I return to the United States, the academic realities of studying abroad have begun to hit as all of the “fun and games” come to an end. I can hardly believe that in the past 5 months, I’ve been to nearly every major region in Spain, and traveled to five new countries on two different continents. Now, I am currently bracing myself for my four final exams in the coming weeks that I have yet to prepare for.

This week was sadly our last week of the Community ESL program at my university. On Monday, a “graduation ceremony” was held for all of the students who enrolled in a class this semester. Both students and volunteers received certificates for their engagement and contribution to the program. I can still remember how nervous I had been at the Community ESL informational meeting earlier in the semester. At the time, I didn’t feel confident enough to teach English for an entire semester to a large group of students. As I’ve mentioned in past posts however, volunteering as an ESL teacher this semester has by far been the most rewarding experience throughout my semester abroad, and definitely not as nerve-racking as I expected it to be. 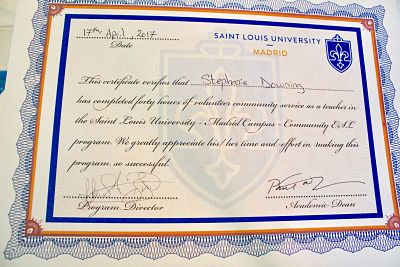 My own certificate for teaching 40 hours of ESL this semester!

Seeing our students progress over the months truly made my experience as an ESL teacher worthwhile. On our last day of class, our students thanked both my teaching partner Alex and I for all of our guidance and support this semester. I was so surprised when some of our students told us that this was the best ESL class they’ve ever taken (I promise this isn’t an exaggeration!). They said that unlike other classes they’ve taken, ours allowed them to have more opportunities to practice communicating in English. I was glad that they benefited from our method of teaching, as this was Alex and I’s main goal when creating our syllabus. We had both taken language classes in the past and agreed that communicating in a foreign language is the most difficult and least emphasized in language learning. I do agree that it is important to have a solid foundation of basic vocabulary words and grammar rules when beginning to learn a language. However, in my 6th year of learning Spanish, my classes have primarily been focused on reading and writing in Spanish, and I rarely have the opportunity to practicing speaking and communicating with others. Alex and I designed our ESL class with this in mind, granted that the students classified themselves as advanced-level English speakers. We only distributed worksheets focusing on vocabulary / grammar about 3 times throughout the entire semester, and primarily focused on facilitating discussions on controversial issues, culture, current events, and other topics. Over time, the students began to improve their pronunciation of English words and learn phrases that would most likely not be taught in a text book, such as idioms, jokes, and slang words. As the semester progressed, we noticed that the students would catch on to some of the phrases Alex and I would use in class, such as “let’s get the ball rolling” or “that’s a piece of cake,” which reaffirmed the importance of incorporating verbal communication in the language learning process.

Throughout the semester, each student was required to give an oral presentation or facilitate a debate on a topic of their choice for the last ten minutes of class. Our students told us that this was their favorite this semester. Since we allowed them to pick their topic, they said that it didn’t really feel like “homework”, as they had the freedom to research a topic they were interested in. Some of the presentations that we had this semester included a movie review, a debate on our society’s dependence on technology, and a student’s reflection on a trip to Vietnam. The students told us that this allowed them to increase their confidence in speaking English publicly, and taught them how to express their interests in English. They also said that they gained a lot more out of this class because they can now use the English language practically. In reality, one will never be asked “what’s the English past participle of ____”. Rather, one will more likely encounter a situation where an English speaker may ask for directions or an opinion about something. Knowing how to understand and respond to something verbally is such an important skill in language learning, and nothing made Alex and I more delighted to know that we actually made a difference for our students. 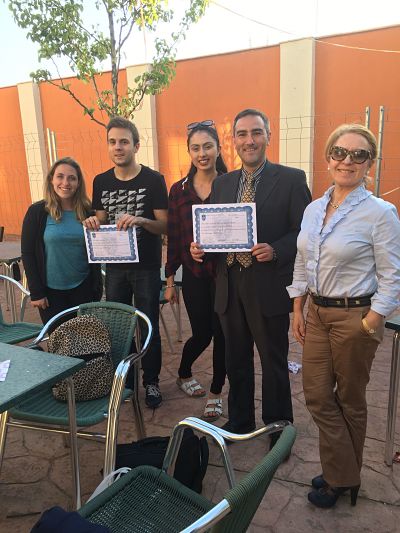 A few of my ESL students at the graduation ceremony

Another perk of teaching an ESL class was the relationships we formed with our students throughout the semester. They are so eager to reunite with Alex and I if we ever visit Spain in the future. Personally, it’s great to have several local contacts in a foreign country, especially since I am not living with a host family. Throughout the semester, our Spanish students taught us a lot about Spanish culture and current events, knowledge that I would not have been able to receive without knowing a local.

For instance, this week I had a great discussion with one of my students about my visit to Valle de Los Caidos (the Valley of the Fallen). Valle de Los Caidos is the most controversial monument in Spain. The monument is located in the Sierra de Guadarrama in El Escorial, a town about an hour away from Madrid. During the Spanish civil war, this region was conquered by Spain’s fascist dictator Francisco Franco. I was glad to have the opportunity to visit the monument, as I had recently taken an exam in my history class about the Spanish civil war, and it was great to be able to have a firsthand account of this moment in history.

​La Sierra de Guadarrama — location of the Valley of the Fallen​

To this day, there are still demonstrations and protests that condemn Franco’s legacy and his monument. Franco’s tomb is located in the basilica at Valle de Los Caidos, which I was able to also visit. Before his death, Franco ordered this monument’s construction to serve as a national act of reconciliation for those apart of his “Glorious Crusade”.  The monument was constructed by Spanish political prisoners who opposed Franco’s fascist ideologies, which is one of the reasons why this is such a controversial monument.

Unfortunately, I was not allowed to take photographs inside the basilica, so I couldn’t capture its spectacular architecture. Inside, the cathedral is dimly lit, which portrays a somber and grim impression to visitors. In my history class, I was taught that Franco was Spain’s equivalent of Germany’s Hitler and Italy’s Mussolini. Throughout his 36 year regime, Franco committed numerous inhumane acts against the Spanish people. He forced labor and servitude onto his political prisoners and killed thousands in his concentration camps.

After my visit, I wasn’t really sure what to make of it so, I decided to talk to one of my Spanish students about her stance on the construction of the monument. She said that Franco was undeniably a terrible man – his violent and forceful acts against the Spanish people were horrifying and socially destructive. Franco’s dictatorship now serves as a dreadful and irreversible mark in Spanish history, one that will forever impact the Spanish people. However, she did say that in Spain at this time, the country was immensely divided. The Spanish people had so many differences and conflicting ideas, which made it nearly impossible to unite the nation. Unlike the United States, where a diverse population is united under common ideals (such as ideologies of freedom, democracy, liberty and justice for all, etc.), there was nothing to unite the Spanish people during the civil war. As a result, a strong leader was needed in Spain to somehow “force” the Spanish people to move past the differences that prevented the country from progressing for many years. Otherwise, growth and progress would have been nearly impossible in Spain. 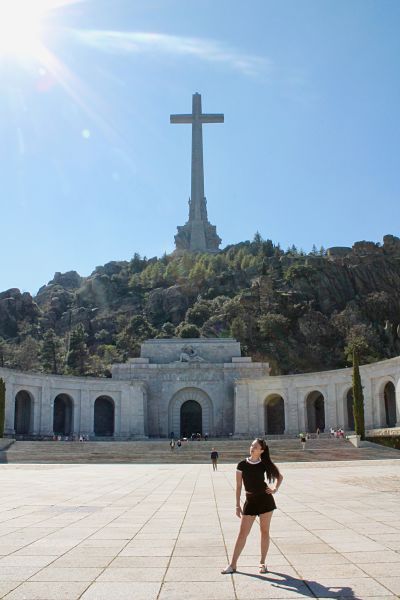 At Valle de Los Caidos – Valley of the Fallen

My conversation with this student truly marks one of the many benefits that come with studying abroad. It’s one thing to learn about a historical event in a history class, and another to obtain a perspective of that same event from someone who had lived through that chapter in history. This is also applicable to our world’s most pressing issues and current events. It’s easy to simply believe dramatic headlines or “fake news” about the world we live in, but having a firsthand account of these issues could dismantle misconceptions or inaccurate stereotypes that the media might portray. Having a conversation with a Spaniard about how Franco’s regime affected her, and her thoughts on Valle de Los Caidos was an intellectually enriching experience for me, much more so than just reading a chapter in a textbook, or listening to a professor who may have never even visited Spain before.  Her thoughts and perspectives on this moment in history is something that I will hold with me forever, and will pass on to others whenever this topic is brought up in the future.