Life’s unexpected surprises and circumstances is truly the best part about being alive. A few weeks ago, my best friend Kaleigh booked a flight to Madrid to visit me and my roommate Carla! Kaleigh was my freshman year roommate at Marymount, and the three of us have become inseparable ever since. Carla and I were devastated when she decided to leave Marymount at the end of her freshman year, but our ongoing friendship has ceased to dissolve.

After Carla and I scavenged three different terminals at Madrid Barajas Airport to pick Kaleigh up (we had gotten lost, Kaleigh didn’t know a word of Spanish, and I ran out of data on my phone :’( ), no words can describe how euphoric we felt once we finally saw her. People around us even clapped and cheered for us as we ran towards her and gave her the biggest hug. 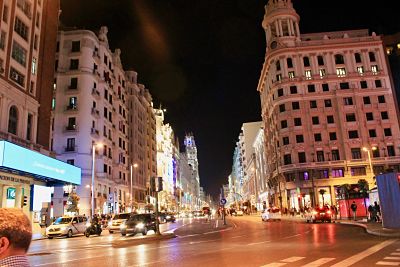 Gran Via: The Times Square of Madrid 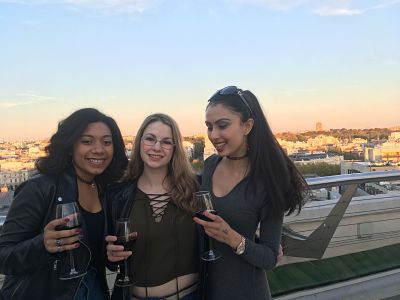 At the top of the Círculo de Bellas Artes

That evening, we took Kaleigh to Gran Vía, which is the 42nd Street of Madrid. It is an upscale region in the center of Madrid that is surrounded by electronic billboards, numerous shops, and advertisements for Broadway productions. From there, we went to Círculo de Bellas Artes to watch the sunset. Bellas Artes is by far the most well-known rooftop bar/restaurant in Madrid. At the top, you have a panoramic view of the entire city – I was surprised that we could even see our apartment building! Kaleigh’s first night in Madrid couldn’t have ended without trying paella, which she naturally devoured. The next day, we had tapas for lunch and visited El Museo del Prado, the world famous art museum featuring works by Velazquez, Goya, and many others.

Giving Kaleigh a tour of a city in a completely different country was a surreal experience. It was just four months ago when I was learning how to use the Madrid Metro myself, and now I can teach someone else. Throughout our tour of Madrid with Kaleigh, I shared memories and experiences that I had made in certain areas, such as the venue I had been at when I lost my phone, the place where I tried tapas for the first time, the metro station where I had gotten lost at, and so on. 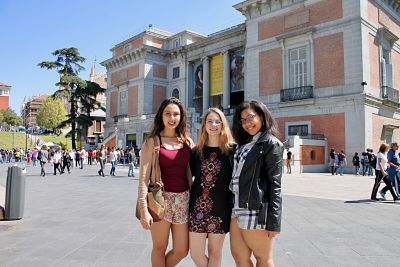 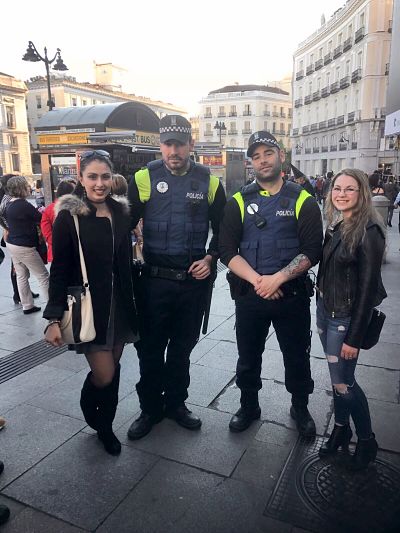 Sharing aspects of the Spanish culture with Kaleigh that I’ve come to adopt over the last four months also made me realize how immersed I’ve become while living in Spain. For instance, I had been surprised when Kaleigh remarked at how late people tend to go out in Spain. I’ve become so accustomed to having lunch at 1pm instead of 11am, and eating dinner after 8 or 9pm, that I had completely forgotten about how these customs differ in the United States.  Washington D.C. and Honolulu are the only two cities that I know like the back of my hand, and now I can add Madrid to the list. Despite visiting several cities and countries throughout my semester abroad, none of these places compare to the experiences I’ve had in Madrid. As I’ve said before, visiting a city or country for a week is completely different than actually living in that place. I’ve made both memories and mistakes while living in Madrid, which has allowed me to learn more about myself and fully experience what it’s like to be a Spainard.

Since Kaleigh will be visiting us throughout Semana Santa, we will be heading to the south of Spain to engage in the festivities of the holiday week. On Saturday, we will visit Córdoba for the weekend and then Malaga to spend a few days on the beach. We are all looking forward to exploring a different region of the country and most importantly, spend quality time with each other. 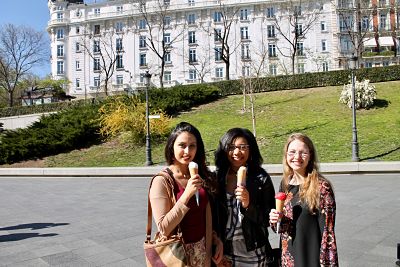