This has been my first weekend in Madrid in a little over a month, which definitely made me realize how fast time is flying. Earlier this week, my friends and I finalized our plans to visit the south of Spain for Semana Santa (Holy week/spring break), which I’m so excited for. Thus, having a free weekend to recharge and unwind before doing more traveling next week has been so refreshing and invigorating.

That being said, nothing too exciting has occurred within the past few days. This week, my friend Alex and I hosted an American themed party for our Community ESL class. The students were required to bring some type of American food or drink and describe when it’s eaten and how it’s prepared. They brought pizza, chicken wings, chocolate chip cookies, chicken nuggets, and Coca Cola – a pretty solid description of the American diet.

During class, Alex and I discussed some of the customs relating to food in America. We said that frozen or processed foods, such as Tyson’s Chicken Nuggets or “TV-dinners” are very common in the States, which really surprised the Spanish students. At first, it was hard for them to understand why frozen food exists in the first place and how it is created. They couldn’t grasp the concept that chemicals were added to the food before freezing it to preserve its quality. In the supermarkets in Spain, the frozen food aisle is mainly limited to frozen fruit and veggies. We told the students that frozen foods are more common in American families because it’s quite common for both parents to work during the day, and frozen foods are easy for kids to prepare on their own. It is also more efficient (time-wise) than preparing something beforehand or teaching children how to cook. One of the students said that although he only has an hour lunch break, he still takes the time to prepare his lunch the night before. Personally, I am not a fan of frozen foods, but I am guilty of popping a hot pocket in the oven since my cooking skills are quite limited. I admire the fact that most people in Spain put their preferences over convenience, as this is often substituted for other commitments in the States. 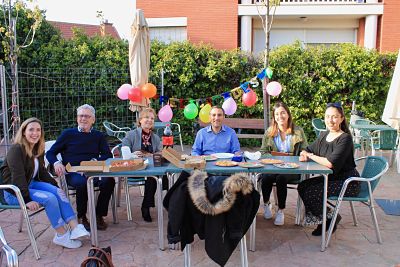 Those of us at the American Party for our Community ESL class.

Not only is eating fresh meals healthier, it’s also allows us to give ourselves a break from our hectic, “on the go” schedules. In Spain, I noticed that people rarely use their phones or other electronic devices when consuming their meals. Earlier this week, I went to a café and saw some students using their computers while eating, and automatically knew that they were not Spanish (their American accent that I eventually overheard reaffirmed this). It’s refreshing to see groups of friends enjoying each other’s company without the distraction of social media and technology. I also noticed that people in Spain rarely take their food para llevar (to go), whereas this is much more common in the States. In high school, I’d always eat my breakfast while driving to school so I could sleep in for another 20 minutes. The Spanish student that I mentioned earlier also said that even though he only has an hour for lunch, he often eats with his colleagues instead of in his office or in the company of his phone.

I definitely think that this is a custom that I will incorporate in my life back in the US. Even if it’s just for half an hour, being able to take some time out of the day to prepare a healthy meal and enjoy the company of my friends and family is one of the best feelings. Not everything has to be rushed and on the go, as I believe that it’s healthy to make time for yourself and escape the hectic routine that often traps us from doing so.