I have reached the time in the semester where I was filling my days with studying and organizing notes to prepare for Midterms over an entire week. Luckily, I am only in four classes so I only had to prepare for four separate exams! The unfortunate part about that is the fact that I have three of those classes within one day, so I had three exams in the course of eight hours! It was a rough day! This was different to me than from Marymount’s Midterm week due to the fact that sometimes my classes would not even have midterms! Often times, the midterm exams would consist of submitting a paper or even the exams would be short and simple. This was not the case at Lorenzo de Medici – there was a Midterm week and every class had an exam! It was quite the challenge!

Getting through midterms is always the most difficult part of the semester for most students, but studying abroad in Europe, you have the luxury of looking forward to traveling somewhere for Spring Break! You have this luxury in the states as well, but the location of Florence allows you to be closer to neighboring countries and opportunities for more adventure! As I was sitting in my last exam, all I could think about was my next destination: Greece.

Athens, Santorini, and Corfu were calling my name. I was even more excited because I would be traveling with three of my roommates! My roommates and I were traveling with a very popular student travel program called “Bus2Apls.” The program is famous for taking students that are living in Europe on day/weekend/week trips to see what the continent has to offer! The purpose of Bus2Alps is to travel by bus, as we did to the port in Italy where we have no other option but to depart by ferry to the port in Athens! Once arriving in Athens, we had a group dinner which followed with a morning trip to the Parthenon! It was unbelievable. The Acropolis is one of the 7 Wonders of Europe! 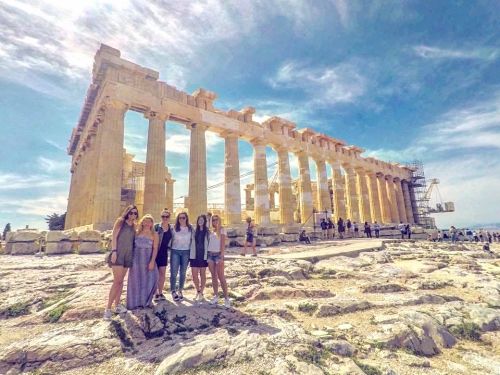 The Parthenon in the Acropolis, Athens, Greece

After Athens, we traveled to Santorini to chase some of the most gorgeous sunsets I have ever seen! With also the typical white and blue houses that you see in the movie, The Sisterhood of The Traveling Pants (oh, and we also found the house from the movie)! After seeing Oia sunsets in Santorini and eating endless amounts of gyros and Baklava, we set out for the Island of Corfu. This part of our trip was more of the typical Spring Break aspect, and less of the tourist attraction areas. We stayed at the Pink Palace which is a resort within the island. On one of the nights we had a Pink Toga Party, where everyone dressed up and we had a typical Greek plate smashing event! Once we had this celebration of watching a typical Grecian dance routine and having plates broken on our heads, I truly felt as if I embraced myself within the Greek culture! 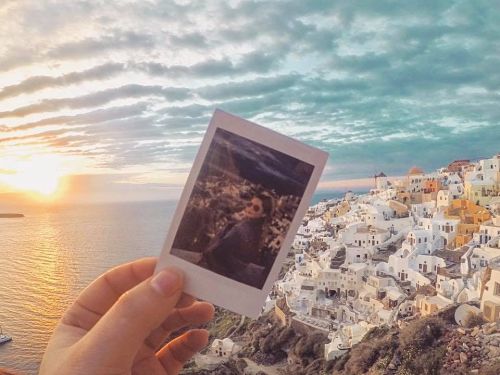 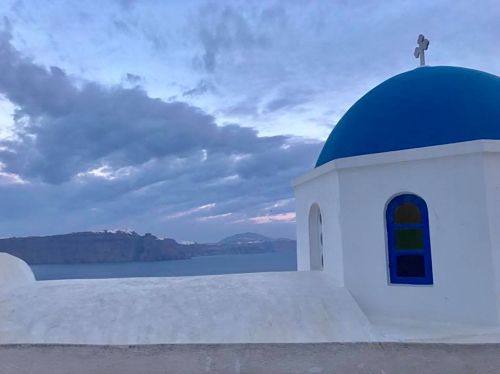 The typical white and blue houses of Santorini

My Spring Break was filled with endless Greek sunsets, pita bread, and baklava. To step out of your daily routine and entire another country where WiFi and access to the outside world is limited, is something that often scares most people. It was a trip of a lifetime that I will never forget but it was definitely refreshing returning to Florence and being able to contact my friends and family once again! It is my advice, that anyone studying abroad, should definitely put Greece on their list of places to see during the semester! I am now back in Florence and getting back in to the swing of things!