This weekend, I had the incredible opportunity to visit Morocco, a country in Northwest Africa. I traveled to Morocco with a program called City Life Madrid, which organizes weekly excursions to different cities in Spain and to other countries for university students. I was thrilled to visit a new country on an entirely different continent for the first time. In addition, I was even more excited to reunite with my Moroccan friend Sadeq, who studied abroad at Marymount last semester.

In order to get to Morocco, we rode on an overnight bus to Tarifa, the southernmost tip of Spain. As we approached the southern region of Spain, I noticed the Arab influence in Spain became more apparent as the journey progressed. It ranged from billboards in both Spanish and Arabic to a multitude of Arabic restaurants, and Arabic-styled architecture. From Tarifa, we took a ferry along the Strait of Gibraltar to Tangier, Morocco, located just 9 miles away from Spain. From Tarifa, it was possible to see Africa from the shore since it was so close to Spain. It was truly incredible to physically see another continent while standing on another! 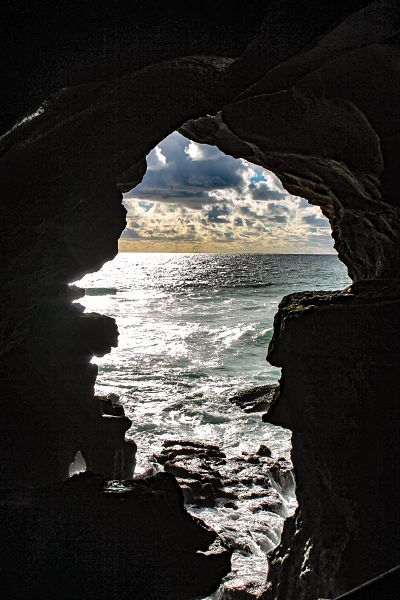 Cave of Hercules: The Gateway to Africa

When we arrived to our hotel in Tangier, I realized that my group of friends and I were all separated. This made me a little anxious, as I was unsure of who my new roommates would be. Little did I know that I had nothing to worry about, and my roommates would accompany me throughout the entire trip. Ironically, their names were both Maria and were from Bogotá, the capital of Colombia. We bonded instantly over our love for Maluma, a Colombian reggaeton singer. They were so welcoming and eager to get to know me, which truly made my trip even better. It was great to step outside of the “American bubble” and get to know others from a different country. 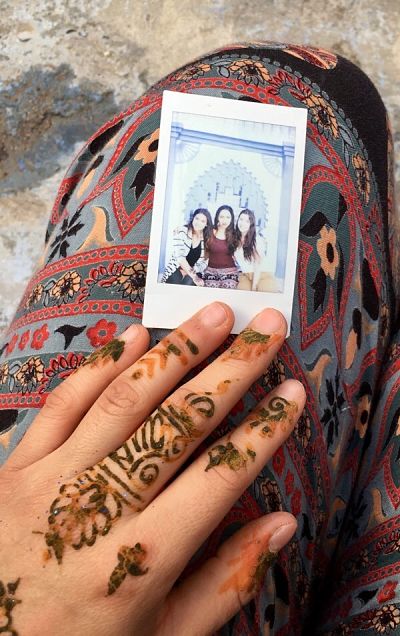 Throughout the trip, we exchanged photos, stories, and elements about our cultures and lives in our home country. I was surprised to learn the significant differences between Colombian Spanish and the Spanish spoken in Spain. They had told me that every Spanish speaking nation has their own accent and phrases that are unique to that country, similar to how American English is different from British English. I thought this was truly fascinating, as I didn’t know that different Spanish speaking countries had their own dialect and accent just like the English language does. This truly adds to the beauty and diversity of the Spanish language and people. 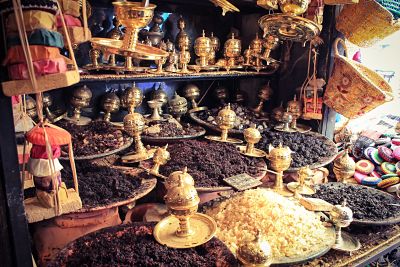 Our first day in Morocco consisted of riding camels into the sunset and shopping for exotic Moroccan goods at a local market (typical, right?). Although very touristy, riding a camel along the beach was so surreal and exhilarating. I always enjoy trips to the beach, as it always reminds me of my lifestyle back home. We then visited a spice shop at a local market, where the
owner described the benefits of some of Morocco’s natural resources and how goods are produced from them. Back in the states, it’s quite common to see Moroccan hair products and oils, and it was great to be able to learn about their origins. For instance, Argan oil, is extracted from the fruit of an Argan tree, which is endemic to Morocco. It contains a spectrum of fatty acids that moisturizes the hair, and can even be used to treat skin conditions such as acne. Additionally, many seasonings used in Moroccan food are actually a combination of other spices.  Ras El Hanout for instance is composed of chili flakes, ginger, turmeric, and several other ingredients. Finally, our day concluded with a dinner at a traditional Moroccan restaurant, where I tried authentic shish kebabs, couscous, and Moroccan chickpea soup, while being entertained by a group of Moroccan musicians. Overall, Moroccan tea was my absolute favorite. I am typically not a tea drinker, but the blend of gunpowder green tea with mint and sugar was delightful, and is definitely a custom that I will integrate into my life back home. 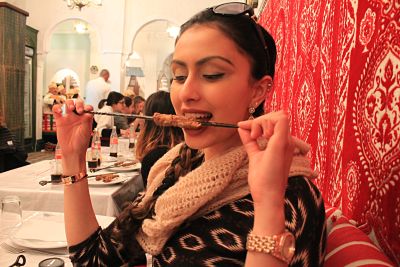 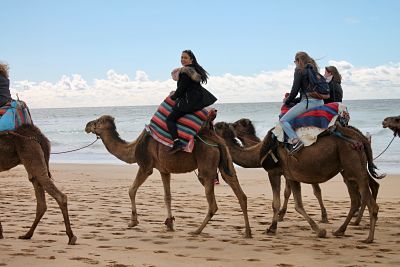 Save a horse–ride a camel!

The next day, we traveled for two hours to Chefchaouen (or Chaouen), which is recognized as the Blue City of Morocco. Chaouen is one of my favorite places in the world, as blue happens to be my favorite color. According to our local guide, the residents of Chaouen painted the walls blue to keep the residents cool during the scorching summer months and to prevent mosquitoes. It was in this city where I reunited with my friend Sadeq. This was by far the best part of my entire trip, and one of the highlights of my semester abroad. Being able to meet his friends and see him thrive in his own culture was an indescribable and bittersweet moment, as I am not sure when I’ll ever see him again. 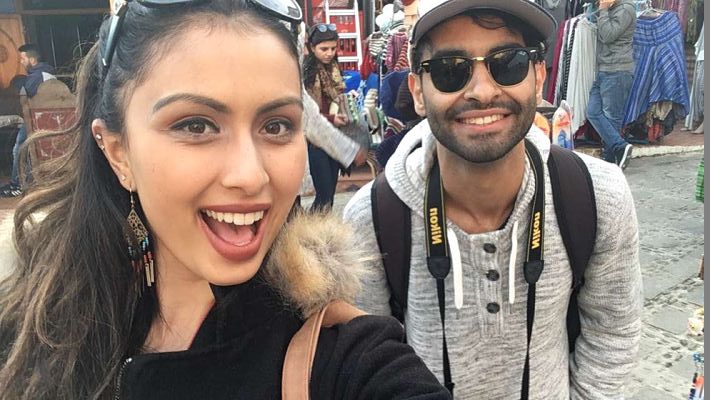 Found a Saint in Morocco! 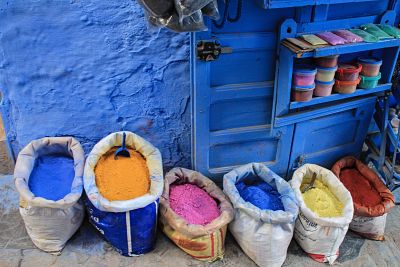 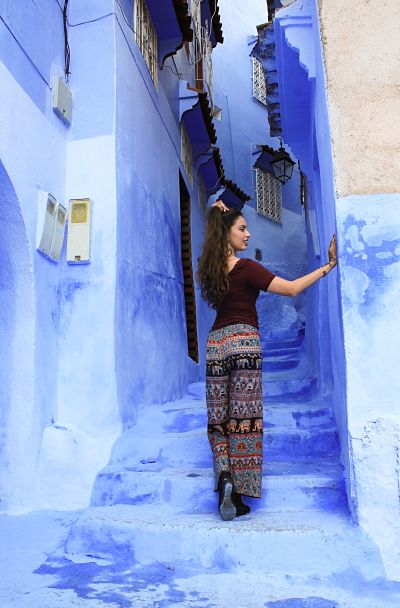 Overall, visiting Morocco was truly a refreshing experience. I felt as if I had seen so much of Europe in the past 3 months, and visiting an entirely new continent truly broadened my global perspective. Although you can literally see Spain from Morocco, the countries are incomparable to each other. Morocco is predominantly Muslim, which has ultimately created a vastly different society form Spain. In Morocco, I noticed that women were almost always accompanied by men and wore traditional Islamic dress. Despite this however, I personally did not feel out of place for not being Muslim or for not wearing a hijab, but did feel wary about going anywhere by myself. Another major difference between Morocco and Spain is that alcohol is legally banned in Morocco, even though many restaurants sell it to tourists. 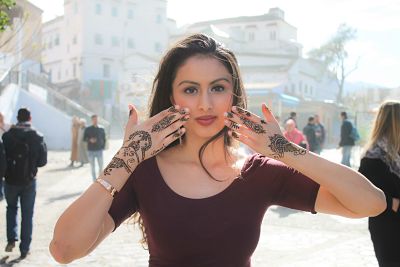 On the contrary, I noticed a lot similarities between the Moroccan and Indian culture, after studying abroad in India two summers ago. For example, Ras El Hanout has a very similar taste to Masala, which is a popular seasoning used in many Indian dishes. I also felt that Moroccans had a similar reaction towards tourists as Indians did. When our group, composed of almost entirely of Europeans and Americans, visited the marketplace, I was surprised that the locals were so thrilled to see us. They would try to practice their English with us and ask questions about our home countries. In other touristy cities, such as Madrid or Honolulu for example, locals (including myself) get quite frustrated with tourists imposing on their daily routine, and I can assure you that I’ve never taken time out of my day to ask a tourist about where they were from. However, this attitude was never portrayed in Morocco or India. The locals, both young and old, were mesmerized by our presence and were so eager to communicate with us. I even caught some locals asking some of us for a picture, as it was rare for them to see such a diverse group of students visiting their town. 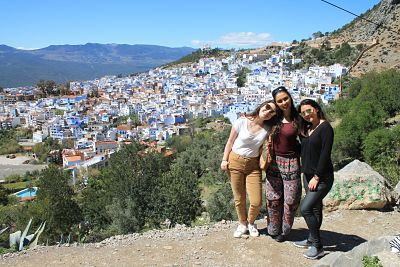 After visiting Morocco, I realized that a lot of people assume that Africa is an entire country, rather than a continent made up of hundreds of different cultures and languages. Morocco in and of itself is one of the most diverse countries I have ever visited. People living in northern Morocco spoke a multitude of languages, ranging from English, French, Arabic, and even Spanish. I was both envious and dismayed that the only language I am fluent in is English. I wish that the education system in the United States taught students a foreign language at an elementary level, rather than in middle or high school. Although my Spanish has been improving after living in Spain for the past 3 months, it will take a lot more time and effort on my end to become fluent. Additionally, it will also be difficult to become fluent in as many languages as Northern Moroccans, as they were immersed in those languages early on.

Despite this, visiting Morocco has only intensified by addiction to traveling abroad. I only wish had more time (and money) to visit more countries in Africa, and the rest of the world for that matter. My entire experience abroad has made me realize that I want to pursue a career that would allow me to travel and become immersed in different cultures. This is incomparable to reading a textbook on Moroccan history or watching a film about it. Being able to taste and smell various aspects of a country and meet its people is such a powerful experience. In the two days that I was in Morocco, I learned so much about myself, my own culture, and a completely new one, all in one incredible weekend. 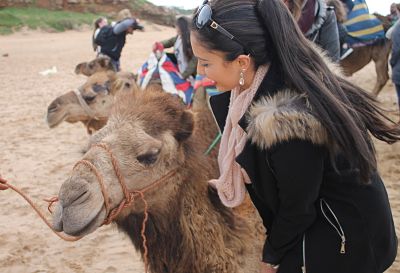 One thought on “Old Friends in New Places”