After writing this week’s post, I had hard time thinking about a title that would best fit it.  The events that have occurred are a bit scattered, and I couldn’t find a word or phrase that could tie everything together. Nonetheless, this week has been nothing but eventful — ranging from an exuberant ESL class, visiting London, and redefining home.

This week’s theme for our ESL class focused on stereotypes about Americans and the Spanish. Alex and I both thought that this would be a great opportunity to tackle some of the common misconceptions about the United States in Spain, and vice versa. We had the class break up into small groups and make a list of all the American and Spanish stereotypes that they were aware of. 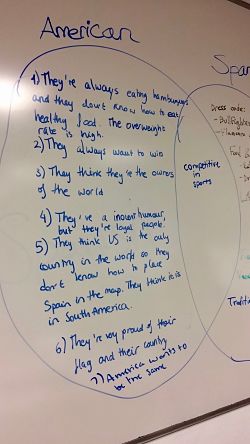 List of American stereotypes by the Spanish ESL students 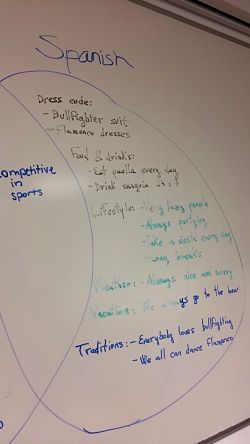 I was initially taken back when I read some of the stereotypes about the U.S., such as
“Americans are very proud of their flag and their country” and “America wants to be the same.” When Alex and I planned this activity out for the class, we expected to learn more about Spanish culture as the students discussed which stereotypes were accurate or not. Ironically however, we ended up learning more about the American culture instead. As Alex and I went through each stereotype, we thought about scenarios or situations that would either confirm or reject the statement. For example, we agreed that Americans are very patriotic. In Arlington for instance, I realized that the American flag flies from nearly every house along North Glebe Road. We learned that flying the national flag on a daily basis is less common in Spain. One of the students said that in Spain, the flag is only on display during election season or for a monumental football/soccer match, such as the World Cup.

However, I had some trouble analyzing the second stereotype, which claimed that all Americans want to be the same. As a nation of immigrants, it’s hard to describe or classify someone as being an “average American.” Whether you’re in Alabama, California, Nebraska, or New York, the American culture and its people vary intensively. After some thought, I perceived this statement as meaning that the American culture strives for equality and conformity. This is something that I can personally resonate with. As someone from a multi-ethnic family, I’ve often found it difficult to conform to one identity. My mother is from India and my father is white, so therefore am I half Indian and half white, or am I simply American? From an outside perspective, the American culture appears to be all conforming. In a country where English is only the language spoken by nearly the entire population, it’s hard to assimilate one’s foreign language and culture into the American culture, especially for a minority group. For instance, when my mother moved to the United States, she didn’t teach my sister and I her native language or cook Indian food for us. In Europe however, one can overhear conversations in Spanish, Hungarian, or English occurring at the same time. Once, I even had a tour guide ask the group which language we preferred to hear him speak — Spanish, Dutch, English, or French. In the U.S., it seems as if people are expected to know English and only English. However, the size and diversity of the United Sates is incomparable to any other nation in the world. Thus, it is only natural for our country to have some elements of conformity for our society to function and progress over time. As a nation of immigrants, English is the language that attempts to united us all, but we should also not abandon our own cultural heritage in the process of conformity. 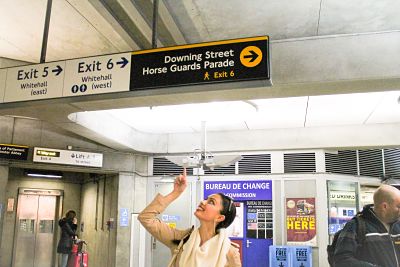 Sign pointing towards Downing Street at the Westminster Tube Station!

On another note, school was cut short this week due to winter break, so my roommate and I traveled to London for the holiday weekend. I am part English on my father’s side, so it was great to visit the city where my ancestors once inhabited. I am also the first person in my family to visit 10 Downing Street in Westminster, where the Prime Minister of the United Kingdom lives. This was such a notable moment in my life – no words can describe how euphoric I felt when I saw signs at the Tube station pointing in the direction of Downing Street, and then actually seeing the street in person. 10 Downing Street is a crucial landmark in my family’s history, and visiting the street has been on my bucket list for as long as I can remember. I couldn’t resist showing all of the guards my driver’s license to let them know that this was my street, not Theresa May’s. 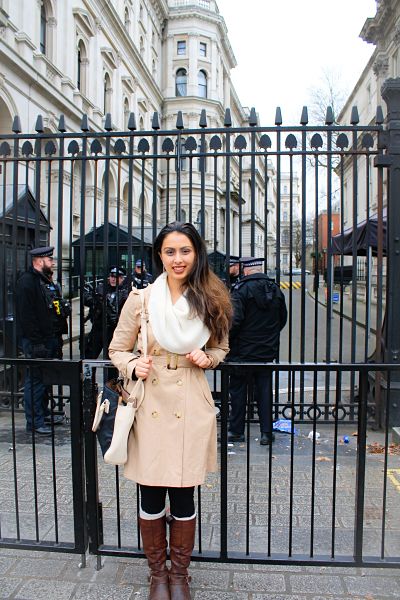 Visiting 10 Downing Street! My last name clearly does not serve as a free pass into the Prime Minister’s residence 🙁

Besides visiting Downing Street, I also had the opportunity to reunite with my host sister from
when I studied abroad in India two years ago. She is currently studying at a university in Nottingham, a town roughly two hours away from London. I was so touched that she took the time to visit me for just the two days I was there. We laughed and reminisced about our memories together in India over fish and chips, which was such a surreal feeling – who would’ve thought that we’d see each other again in London of all places! 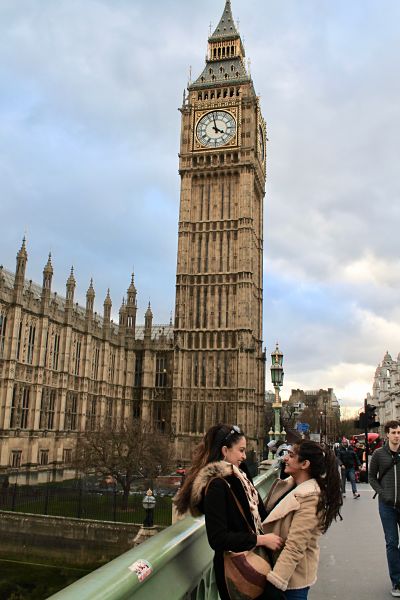 Reuniting with my Indian host sister at the Big Ben!

Before we knew it, it was time to board our flight back to Madrid. As we waited at the gate, I told my roommate, “God, I am so hungry – I can’t wait to be home!” Home being Madrid, that is. I stopped for a minute, and reflected on what I had just said. Before coming to Madrid, I never associated any other city besides Honolulu as being “home”. The sentence came out so naturally, as I didn’t think twice about the place I was referring to when thinking about going home. Home is truly where the heart is, and it’s incredible that the feeling of home can be applied to more than one place. Hawai’i has such a unique culture that different from any other place I’ve ever visited, most especially Madrid. Thus, being able to call Madrid home, with a culture and society so different from Hawai’i, was definitely reassuring. With that in mind, I’ve come to realize that feeling at home can be applied to places, not just a place, where you share a common bond with its people and society. 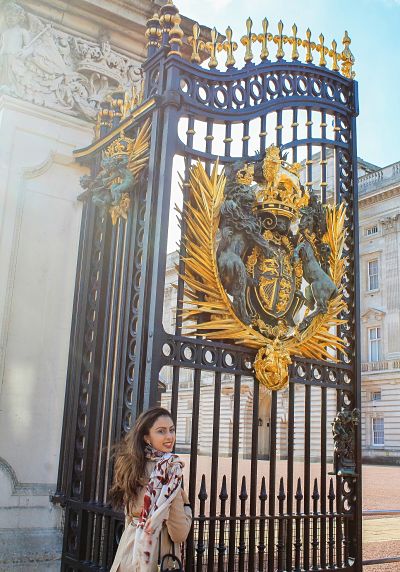