After living in Spain for six weeks, I finally feel completely settled in. Sometimes it seems like I’ve lived in Madrid my entire life, as I now know the streets of Puerta del Sol like the back of my hand and find it bizarre to eat lunch before 2 pm. Other times, it feels like only yesterday when I stepped off the plane at Barajas International Airport and typed in “where is the baggage claim” on Google Translate.

In these six weeks, I’ve developed a fairly consistent daily routine. I’ve gotten involved in several extracurricular activities at school and as a result, have made numerous friends from all over the world. A month ago however, I didn’t think I would have fit-in so well into my new life in Spain. Not to say that my first few weeks in Spain were undoubtedly incredible – as I had fallen in love with paella (Spanish rice), viewed a beautiful Flamenco performance, and dove headfirst into a culture that has now become such an integral part of my identity. However, despite visiting some of the world’s most treasured sites and assimilating into Spanish culture, I still felt that there was something missing in my life that was a crucial element of who I was at Marymount. 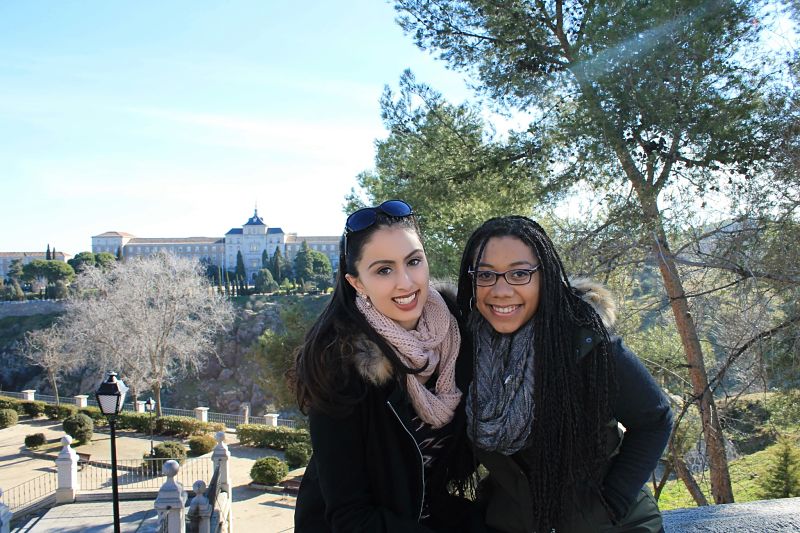 Exploring the city center of Madrid with my roommate.

There’s something quite compelling about fresh starts in life. Being completely anonymous in a new school and country allows you to control how people perceive you. There is nothing for people to judge or hold against you, except for how you present yourself in this very moment. During my first weeks at SLU-Madrid, I felt like the new kid who was enrolled in the middle of the semester, when everyone else had broken the ice and made their own group of friends. SLU-Madrid has a significant number of American students studying abroad – many of whom came together from the same university. I was a bit taken back when the majority of students were already integrated in cliques from day one. Add this to having a shy personality as I do, and one can feel quite alone. I had never encountered this type of feeling before, as starting my freshman year at Marymount wasn’t nearly as challenging since I wasn’t the only “new” student. The entire freshman class at Marymount sailed on the same boat as I, making it a lot easier to open up and get to know others.

In order to get to know others at the university, I made it a point to introduce myself to the students I sat next to in class and get involved in extra-curricular activities after school. One of my closest friends at SLU-Madrid happens to also be my teaching partner for our Community ESL class, and I have also made friends by participating in BocaTalk and as a member of the school’s dance team. However, these relationships did not happen instantly – it took time and effort on both ends to develop these friendships over time.

Once I chose to be less self-conscious and more open towards others, I was surprised at how easy it was to meet others. I was ignorant in thinking that struggles that I had been facing were only applicable to me. Some of my new friends confided that being in a stringent clique kept them from stepping out of their comfort zone and meeting locals and other Americans. A friend even told me that she thought I was lucky for coming to Spain without a big group of students from my university, as it allowed me to avoid the drama that sometimes followed and expand my horizons to do what matters to me. 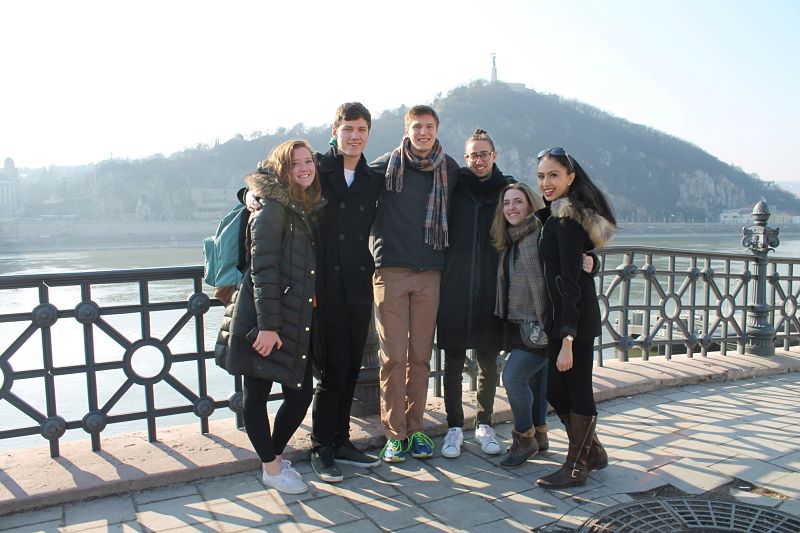 My friends and I on the “Pest” side of Budapest, the capital of Hungary that is separated by the Danube River.

As I reflect on these challenges, I believe that it has taught me a lot about myself, and has essentially changed me for the better. I have learned to be more assertive and confident with myself, and less self-centered and judgmental. I have ultimately assimilated into a stable group of friends that I feel like I’ve known for ages. This past weekend, we spontaneously traveled to Budapest and had an incredible time learning about the Hungarian culture and exploring the country. It was so exhilarating to travel to a completely new country with people that I had only known for only a few weeks. If I could survive being the “new kid” at school and make the first move in meeting other people, I don’t think I will ever struggle in adapting to new environments in the future.

Most importantly, I have developed a sense of empathy for new students at my university, especially the international ones. In the past, I never thought about the struggles that new students may face every day. Last semester, I lived in the Global Thinkers community hall in Gerard, but did not spend much time getting to know my international neighbors. I now know what it’s like to be in a foreign environment with limited knowledge of the language and culture, and where everyone else appears to already have a group of friends. When I return to Marymount in the fall, I will make more of an effort to introduce myself to new students, rather than being completely oblivious to their struggles in adapting to a completely new society. It’s oddly amazing how life’s most difficult experiences has the power to impact a person indefinitely – reaffirming the notion that what doesn’t kill you truly makes you stronger. 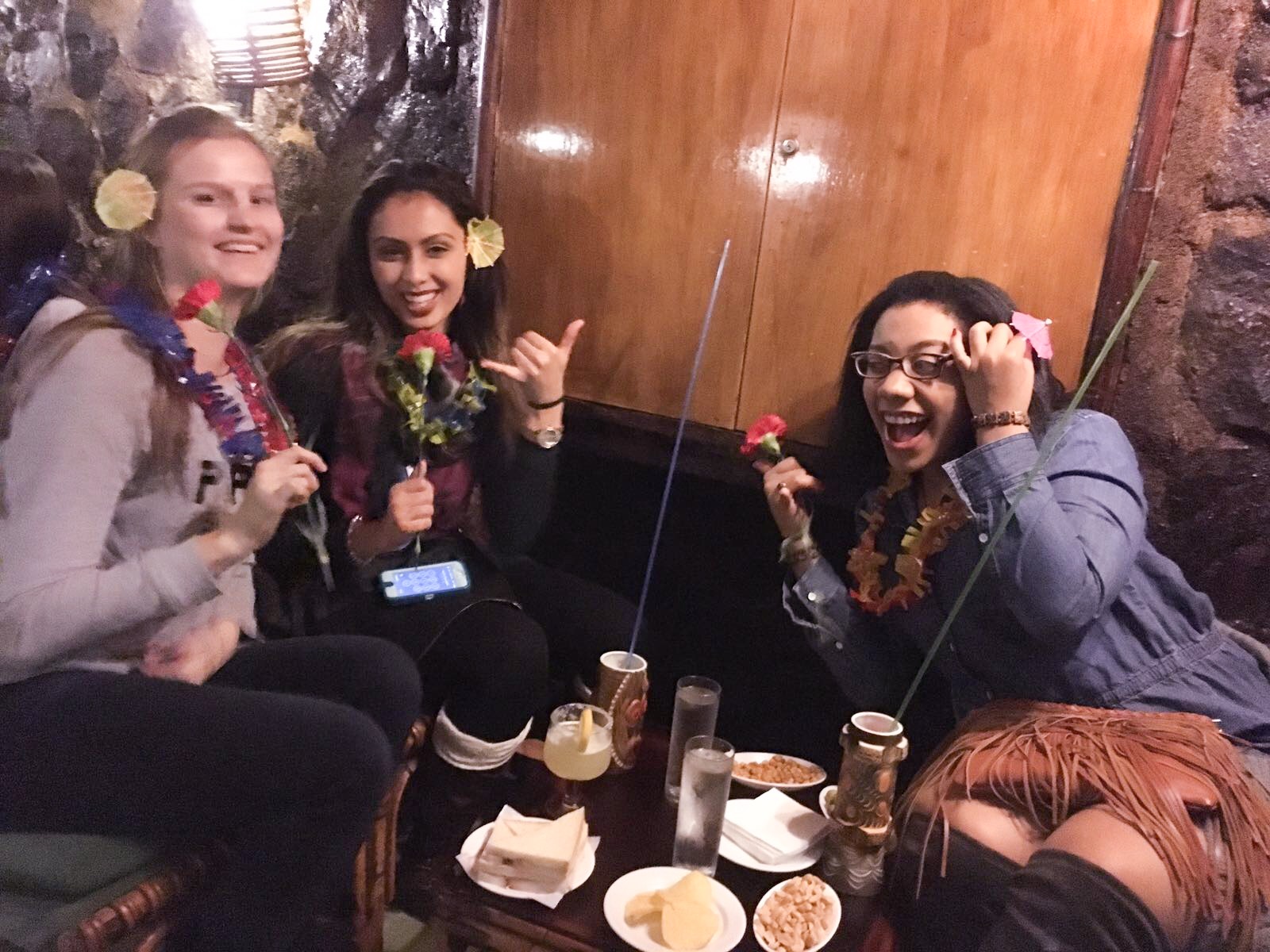 Earlier this week, my friends and I stumbled upon a Hawaiian-themed bar in Madrid! Unfortunately, it failed to resemble an accurate perception of my home state