Carnevale is a typical Italian celebration that has been kept a tradition for thousands of years. The word Carnevale stems from the Latin words carne (meat) and vale (farewell), thus this tradition is in light of the Christian celebration of the beginning of Lent. According to the Christian tradition, Lent is the 40 days leading up to Easter when meat is not consumed. Typically this festival involves a celebration of large groups of people and even parades where people wear masks, resemble elements of circus environments, and take to the streets!

The purpose of the masks is to take away a persons’ typical identity so that there may be an act of social unity. The masks range from all sorts of different colors, the more vibrant and intricate, the better. Some masks are feminine with feathers and glitter and gems, while others are square and simple colored with some even having a long nose (like Pinocchio). Often times, the celebration includes excessive consumption of alcohol, meat, and food in general. 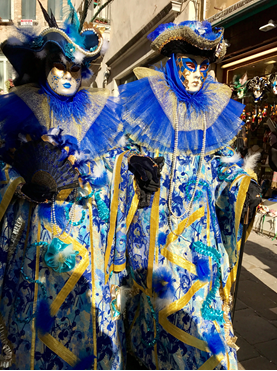 A couple dressed up in costume to celebrate social unity

In order to get the full experience, I went to the most popular place in Italy to celebrate Carnevale; Venice. Venice is the most popular for Carnevale due to its tradition of intricate masks and outfits that people dress up in to portray social unity. I had been to Venice before and it was obvious to me that there were hundreds of more people there than there would be on any other given day. Walking through Venice you could feel how excited and happy everyone was to be there joining in on the festivities. There were people selling masks all over the place. Everyone was stopping to take pictures of those dressed up in costumes. Those dressed up in costumes would slowly walk through town so that people could take pictures. At one point during lunch, my friends and I decided that it felt as if we were in a movie scene as we saw a group of people dressed up in costumes having a conversation while standing on a bridge with colorful houses in the backdrop. Definitely a sight I will never forget. 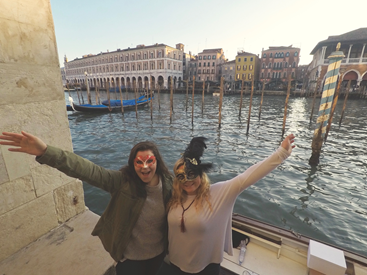 Marymount student, Cara Bernardo, and I in our masks by the water

Throughout the day, we first picked out and put on our preferred masks, then we went to lunch where we felt as if we were in a movie scene. Then by that time, it was almost time for the parade! The parade was in the middle of San Marco’s Square, where there were people in their costumes parading around, families throwing up confetti while wearing their masks, and live performers on stage singing during the celebration. After the parade, the celebrations continued throughout the night with performers continuing to sing (in English) different songs, and vendors of all kinds being open, and shops with intricate masks for purchase almost selling out.

Being part of such a large scale traditional Italian celebration while being in Venice, is something that I will always remember. From buying my own mask, to taking pictures with those in costumes, to throwing confetti, to feeling as if I was in a movie scene, Carnevale was definitely an Italian tradition that I would like to experience again. 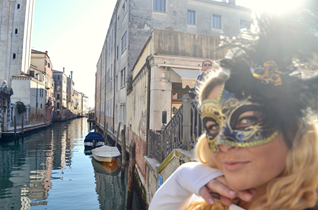 A typical mask that would be worn during Carnevale

One thought on “Carnevale Celebrations”