I genuinely can’t come to the realization that I’ve lived in Spain for only two weeks. Attending classes at Marymount and being with my family over the holidays seems like a lifetime away. I suppose this can be attributed to the amount of personal growth I’ve had based on my experiences thus far. I nosedived into Spanish culture upon my arrival, and resurfaced with so much knowledge and admiration of the Spanish culture and language in less than a month.

This past weekend, my roommate and I visited Barcelona with her family. It was a roughly six-hour drive from Madrid – by far the longest I’ve ever been in a car. On the way, we drove past dozens of small villages and vineyards, contributing to Spain’s world-class wines. My first impression of Barcelona reminded me of Waikiki, a touristy city in my home state of Hawai’i. Palm trees lined the beach alongside numerous shopping plazas, restaurants, and clubs. It was great to have an aspect of home with me in Spain. The only thing missing was the warm and tropical climate…which doesn’t exactly describe the 40 degree weather in Barcelona.

During my visit, I was surprised to discover that locals spoke Catalan, which isn’t exactly a direct subset of the Spanish language. My roommate, a native Spanish speaker, described Catalan as being a dialect from both Italian and French, which I found uniquely fascinating. In Barcelona, Catalan, not Spanish, is taught in schools and is spoken in the workplace. However, it seemed like many locals were familiar with Spanish as well – although this may be because Barcelona is a tourist destination. 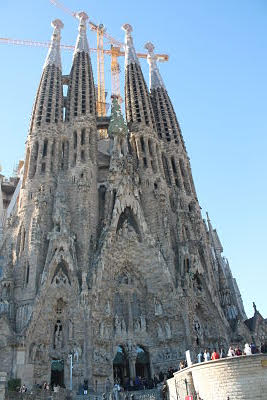 The next morning, our first visit was to La Sagrada Família, an exquisite Gothic-styled Basilica created by Spanish architect Antoni Gaudí. Gaudí’s death in 1926, before the Basilica was even close to being completely constructed, leaves an element of tragedy and uncertainty within the structure. The design of La Sagrada Família is a representation of the Bible. That being said, La Sagrada Família doesn’t look like an ordinary cathedral or historic church. Rather, it resembles a massive sculpture with numerous biblical scenes, such as the birth, death, and resurrection of Christ. Currently, La Sagrada Família is still under construction. This is because it is solely funded by public donations, and has encountered numerous interruptions in its construction by Gaudí’s death and the Spanish Civil War.

After visiting La Sagrada Familia, we went to Park Güell. Other than being an inspiration by Antoni Gaudí, Park Güell is often recognized as the location of the second Cheetah Girls movie. The park overlooks a panoramic view of Barcelona and the Mediterranean Sea, and consists of numerous gardens, buildings, and mosaics. We ended the day by visiting Palau Reial de Pedralebes – the residence of the Spanish Royal Family when they visited Barcelona. 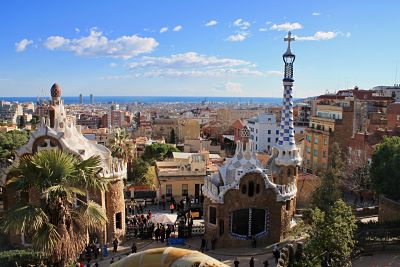 Our weekend in Barcelona ended on Sunday, and were back to school the day after. What I love about SLU-Madrid is its international faculty. For instance, I have professors from Scotland, Ireland, and the U.K., each of whom bring a unique perspective to their class. So far, my favorite class this semester is my Latin Rhythms and Dance class. This week, we finished learning Merengue, which is the traditional dance of the Dominican Republic. This style of dance originated amongst slaves, who were originally trying to copy ballroom dancing. Since the slaves were always chained together, they would drag their feet to the sounds of rhythmic drum beats while working in the plantations. Besides dancing, my favorite part about the class is our dance instructor herself. She is truly a character, as she invited our class to practice our new dance moves at the disco next week! This is by far a first, as none of my professors at Marymount have ever invited students to attend a disco night with them. 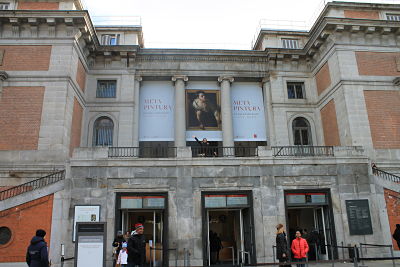 At the end of the week, my friends and I visited El Museo Del Prado, which holds some of the world’s most famous artistic masterpieces. Visiting this museum has been on my bucket list for years. In high school, I took an art history and Spanish class that heavily focused on paintings by Spanish artists such as Diego Velazquez and Francisco Goya, as well as Hieronymus Bosch and El Greco. Seeing the paintings that I studied so intensively in person was a mesmerizing experience. These included Las Meninas (Velazquez), The Third of May (Goya), and The Garden of Earthly Delights (Bosch). I was amazed at how well each of the pieces were preserved for centuries. My two favorite pieces at the museum were the Adoration of the Shephards by El Greco and the Desposition from the Cross by Rogier van der Weyden – no photograph can capture their intrinsic and captivating allure. I was fascinated by Weyden’s portrayal of human tears and the lighting and shadow techniques applied by El Greco in each of their works. 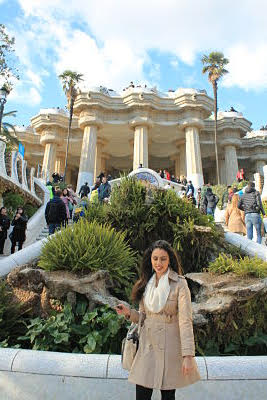 Next week, I’ve planned a visit to Segovia, a historic city about an hour north from Madrid. I’ve also recently booked a flight to London (for just 60 Euros!!!!) to visit the iconic 10 Downing Street, named after yours truly. More on this later!

One thought on “Barcelona, Merengue, and Prado, Oh My!”