Diving in a Loopy Current

Diving in a Loopy Current

Over the last few days, you may have heard comments about how lucky we are to be able to dive in this area of the Gulf of Mexico. There is great difficulty in diving on the southern portion of the Western Florida Escarpment, as currents are particularly strong in this area. Past dive attempts by the Okeanos Explorer and other programs were prevented by the full force of the Loop Current – flowing at four knots. But on the Gulf of Mexico 2018 expedition, we have finally been fortunate to find favorable conditions!

But why would a strong Loop Current affect our ability to deploy remotely operated vehicle (ROV) Deep Discoverer on some expeditions and not others? The quick answer is that, on this expedition, the Loop Current has pinched off an eddy which brought weaker currents to the escarpment region. I’ll explain more below. 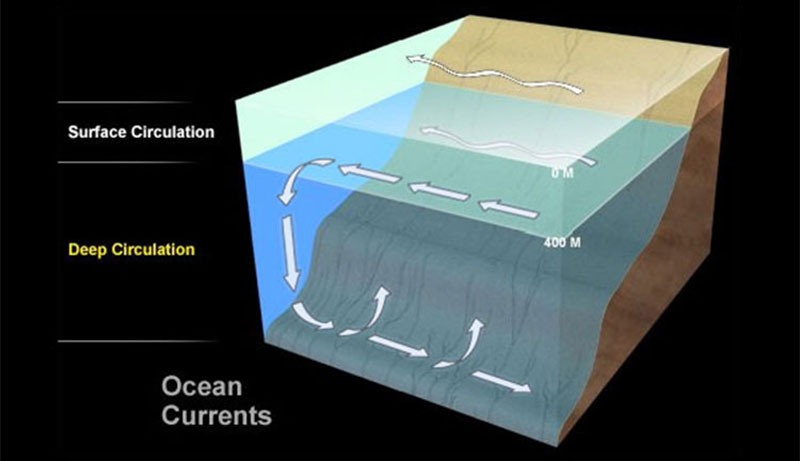 Currents are cohesive streams of seawater that circulate through the ocean. Some are short-lived and small, while others are vast flows that take centuries to complete a circuit of the globe. There are two distinct current systems in the ocean—surface circulation, which stirs a relatively thin upper layer of the sea, and deep circulation, which sweeps along the deep-sea floor. Image courtesy of the NOAA Office of Ocean Exploration and Research. Download larger version (jpg, 103 KB).

But first, consider the basic difficulty of controlling two undersea vehicles (Deep Discoverer and Sirios), a ship, and the thousands of meters of heavy cable tying all three together. Each component of the system must be kept in just the right place. Working against the needed coordination are winds on the surface and currents at depths, many of which can flow in different directions at different depths. Unfavorable winds and currents can make coordination impossible. The ocean above the West Florida Escarpment is a place where unfavorable currents in the Gulf of Mexico Loop Current are often present. 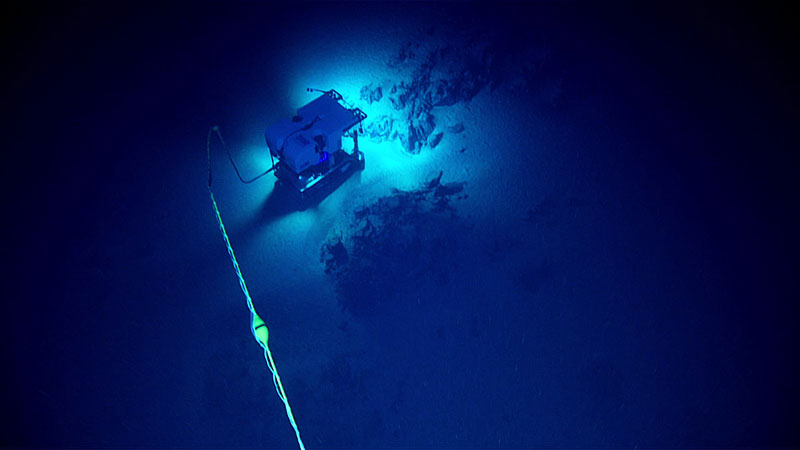 ROV Deep Discoverer, working in conjunction with Seirios and NOAA Ship Okeanos Explorer’s dynamic positioning system, is able to get in close to the seafloor to image large rock outcrops on Dive 14 of the expedition. Currents had prevented previous attempts to dive in this location. Image courtesy of the NOAA Office of Ocean Exploration and Research, Gulf of Mexico 2018. Download larger version (jpg, 573 KB).

The Loop Current is the westernmost segment of a clockwise surface circulation known as the North Atlantic Gyre, which fills the entire North Atlantic Ocean. Winds, blowing across the ocean surface, power the circulation. The winds are driven by heat differences between the Equator and the North Pole. The Earth’s rotation causes the flow to be intensified and relatively narrow along and the continental margins of North America. As the Loop Current flows east out of the Gulf of Mexico, the name changes to the Florida Current, and then to the Gulf Stream.

The behavior of the loop as it flows into and out of the Gulf can be quite complex. Sometimes the Loop Current takes the shortest route in and out, flowing close to the north shore of Cuba and leaving the escarpment relatively free of intense currents. Other times, it extends the full north-south extent of the Gulf, sweeping across the northeastern shore before flowing south again near the Florida coast—and making ROV operations near impossible! When fully extended, the northward and southward flow can become linked creating an eddy that can persist for months.