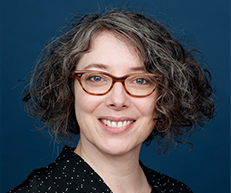 What happens when students can participate in creating their own textbook? Dr. Tonya Howe, Associate Professor of Literature, is excited to find out. Howe began developing the pilot site “Novels in Context: An Open Anthology,” during her 2014 sabbatical to test this idea. Her framework has now become a full-blown collaborative project, which was awarded a Digital Humanities Advancement Grant by the National Endowment for the Humanities (NEH) in December 2017. Dr. Howe is the Co-Project Director with Dr. John O’Brien, a professor at the University of Virginia, and Christine Ruotolo, Director of Arts & Humanities at the University of Virginia library. The goal of their project, Literature in Context: An Open Anthology 1660-1830, is a repository of reliable, annotated texts made “for the classroom by the classroom.”

“I’ve always been interested in incorporating technology in the classroom,” Howe says. “This project was first envisioned in a way that would allow me to connect the two parts of my interests in 18th century literature and digital humanities, but it has grown into a meta-pedagogical tool, of sorts.”

Students will actively participate in the construction of the texts in the project, and those critically-annotated texts will then be developed into an anthology for later use in the classroom. A web-based source book with a print analogue, Literature in Context will become a freely-accessible and open-source alternative to costly textbooks from commercial academic publishers. It seeks to engage students more fully with the material texts that make up our shared cultural heritage.

Dr. Howe has taught at Marymount since 2006, where her areas of interest are 18th century literature and the digital humanities.

In October 2014, I signed on to be the editor of The Collected Poems of Ethelbert Miller. I first met Miller in 2007 when I was an undergraduate student at Marymount and he was a Visiting Poet. Editing Ethelbert’s Collected Poems of Ethelbert Miller would be no small undertaking; his writing career began in the early 1970s, and 1974 marked the publication of his first book of poems, Andromeda. Today, Ethelbert is known for his work as a DC-based poet and literary activist, and he is also the author of eleven books of poetry and two memoirs. A book of his collected poems would need to represent over forty years of writing and service to the community. Such a book would need to tell the story of a man in love with language, with words, with community. The story would need to include the sadness, the loneliness, the quiet moments of the writer listening to the music inside his head: so much story in one book to signify a lifetime of work.

As editor, it was my job to select poems from Miller’s personal collections, the Gelman Library archives, and his eleven books of poetry. Once I selected the pieces for inclusion in the book, I then needed to arrange the work in a cohesive fashion. Lastly, and perhaps most dauntingly, I needed to write the book’s introduction, which would require intensive research and conducting interviews. Working on this project has been the most difficult and rewarding experience in my professional career thus far. I am very grateful to Miller who entrusted me with the responsibility of editing this important collection. I am also thankful for the encouragement I received from my Marymount colleagues—Dr. Holly Karapetkova and Dr. Marguerite Rippy were especially supportive.

In the end, I am very proud of the final product—a comprehensive collection honoring Miller’s aesthetic and encapsulating the heart of the poet. In March 2016, Willow Books published The Collected Poems of Ethelbert Miller. I have enjoyed speaking about the book and my editing process at many venues, including Upshur Street Books, Baltimore’s CityLit Festival, and Busboys & Poets. Miller continues to write poems, and I, in turn, continue to collect and edit his work. There are many more collaborative projects for us in the works!

Dr. Rippy works on 20th century film and drama, particularly on adaptations of Shakespeare, race and performance, and the film maker/actor Orson Welles. Currently, she is conducting archival research on Welles’ “Voodoo” Macbeth, a black-cast production funded by the Federal Theater Project. Her research on Welles’ Macbeth has been 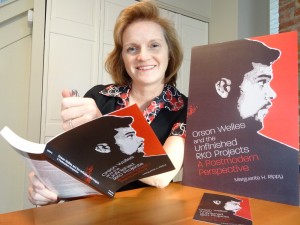 published in the 2008 collection Weyward Macbeth, in an article published in Shakespeare Bulletin in 2014, in her 2009 book Orson Welles and the Unfinished RKO Projects, and in the 2013 co-authored book Welles, Kursosawa, Kozintsev, Zeffirelli. She is particularly interested in press accounts of the road tour of the 1936 Macbeth as it traveled through the segregated American South, and in the contributions of African drummer/choreographers Asadata Dafora and Abdul Essen. Her essay on Dafora will appear in Orson Welles: Stage, Sound, Screen, and Society, forthcoming from Indiana University Press. In 2015, she appeared at the Indie Memphis Film Festival to host a screening of Welles’ rarely-seen Chimes at Midnight (1966). She also serves on the screening committee for the documentary film festival AFI Docs and acts as faculty adviser to the MU Film Club and MU Film Fest.
_____________________________________________________________

The Sankofa-Love Project (SLP) is a re-education resource aimed at giving teachers, students, and other knowledge-seekers easy access to information that will fill in the likely gaps in their understanding of U.S. history and culture. The SLP brings marginalized histories in from the cultural and racial margins with the intent to construct a truer, more inclusive narrative about the events that formed the U.S. and the dynamics that characterize it and contribute to contemporary realities and relationships. The SLP relies heavily on primary source material and on secondary source material that itself relied heavily on primary sources and/or is considered “classic” due to its scholarly cohesion and reputability. The SLP is meant to be of use to anyone who realizes that their own educations were lacking in broad perspective, were biased, or were omissive or otherwise skewed. It evolved out of Professor Trembath’s own educational experience and scholarly pursuits: first, as a Euro-centrically educated Pennsylvania public school student; then as a multiculturally re-educated undergraduate student (Temple University, class of 1992); then as a student of African American literature (Howard University, class of 1996), and now as a researcher, writer, poet, and performer.  Professor Trembath’s Sankofa Love Project includes a website (www.sankofalove.org), a book (This Past Was Waiting for Me, in press, 2016), a blog (The ANti Pundit @ sankofalove.org), and public art performances, collaborations, and teach-ins.  The website, book, and blog are scheduled to launch this June, 2016, but are available for review in draft form on line.