My impression of “King Arthur and the Knights of the Public Humanities: Literature in the Classroom, on Guided Tours, and on Screen,” a lecture by Dr. Dorsey Armstrong. 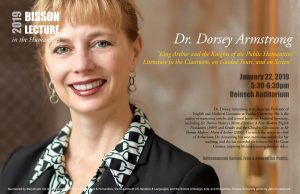 Literature is a vast universe of knowledge and entertainment, and it is transient. By attending lectures such as Dr. Armstrong’s, we do more than learning something new. We appreciate the power of human stories and the changeability of human culture. Weobserve and learn by the efforts humanity had to make thousands of years ago to create what we today call “classic.” As writers and readers, we realize that at any given moment we have the magnificent opportunity to create the myths of tomorrow. So, ask yourselves, “what myths will humanity have a thousand years from today?” and “Who is my Arthur?”

There are myths that materialize in our imagination an era when magic was as real as the air we breathe, and a knight’s code of honor was a sign of zeal and bravery—a time of majestic castles, legendary quests, glorious battles, and betrayal. The literary peak of that epic era is undeniably portrayed in the legend of King Arthur. However, have you ever wondered how much of what we know about King Arthur and his Knights of the Round Table is true? Was there a sword in the stone? Was Merlin even real? Who was really King Arthur? Did any of it even exist at all?

The questions and many more were answered in Reinsch Auditorium on January 22, when Dr. Dorsey Armstrong of Purdue University gave the tenth annual Bisson Lecture in the Humanities on “King Arthur and the Knights of the Public Humanities: Literature in the Classroom, on Guided Tours, and on Screen.” By the end of the lecture, Dr. Armstrong’s enchanting way of presenting facts and materials from her in-depth research managed took the magic away from the myth and exposed its origins.

Dr. Armstrong started her lecture with an introduction to the legend and listed the common elements in every known adaptation. Then, she asked how many of those elements we thought were real. Dr. Armstrong hooked us in even more by singling out only three of those elements. Arthur was real, but not as the mighty king whom we all know, even though later generations of kings would name their children Arthur. Through a thought-provoking demonstration of how the legend of King Arthur was born, we learned that the initial authors who created it were French. The last part of the lecture, and before Dr. Armstrong answers questions by the audience, focused on some of the most popular adaptations of the myth today on the big screen and in literature.

If I had to pick my favorite moments, those that made me chuckle and connect with the subject, it was definitely when Dr. Armstrong read a medieval document in Old English–her accent was more than impressive! Another moment would be when Dr. Armstrong named “Monty Python and the Holy Grail” as the best movie adaptation of King Arthur’s myth.

The legend of King Arthur and of the Holy Grail was created during the time of the crusades. Retrieving the divine artifact could have been interpreted by the culture of that time as a calling to take back the holy lands. Could a legend that entertains us today, have been used as propaganda for the people of the medieval period? One thing is for sure: ‘where there’s smoke there’s fire’ is a wise phrase. Maybe Camelot or Merlin never existed, and maybe the Lady of the Lake was just a symbol for the hope that nature gives to righteous men, but Arthur did exist in some point in the past. This fact teaches modern day writers that storytellers have the power to form myth.