Marymount English Alum David Beach recently submitted a posthumous nomination of  legendary department faculty member, Boyd Hagy, for the Kennedy Center/Sondheim Teaching Award.   A popular teacher with a long career at Marymount,  Dr. Hagy had a deep  impact on many students and is fondly remembered by his friends and colleagues.   David shared  his nominating essay:

“Argument is welcomed and encouraged, but you better have your ducks in a row when you argue with me.”

As I write this, I hear the booming Irish baritone of Dr. Boyd Hagy. When he spoke, 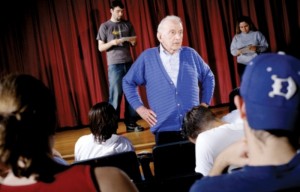 everyone in the next room could hear him too. I took his courses on modern drama, Shakespeare histories/tragedies, then Shakespeare comedies. He carried voluminous notebooks with notes, clippings, playbills and posters of every play we covered. Every three or four years, he taught a master’s seminar, Social Upheaval and Dramatic Structure. I had to wait until after I finished an MA to take it, gladly paying the full tuition rate.

His thesis for the seminar: the social movements of the 1960s and 1970s altered American drama, and thus art, from what had universal appeal to something that appealed merely to individuals in certain contexts. For weeks, we covered “the universalists” – O’Neill, Odets, 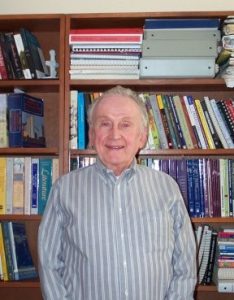 Brecht, Miller, Williams, Beckett and Pinter. Then followed “the individualists” – Churchill, Howe, Shepard, Rabe, Baraka, Albee, Mamet, Stoppard, Kopit and Durang. We argued. Of course Kopit’s Wings shows the “universal” nature of a stroke victim! Of course Durang’s Sister Mary Ignatius shows the “universal” conflict between doctrine and reality! My two major papers “proved” that male images in post-1960s drama showed the universal plight of the modern man. Or so I thought, especially since I earned an “A.”

I studied more drama, attended more plays, sought the art of modern drama. Boyd and I would meet twice a year for lunch. I’d fill him in on what I’d seen, we talked about what we both had seen, and I continued to learn from his astute analysis. Seven years after that inspirational class, we were having lunch in the university dining hall. I was teaching while pursuing a doctorate at another university. One of his undergraduates, a young woman with parrot-colored spiked hair and six noserings, stopped to ask him a question. When she left, I commented on her “ridiculous” hair style. Without being dismissive, he said she was just expressing herself like he did in the ‘40s when he sported a giant Pompadour while wearing a Zoot suit. I leaned in and whispered, “I have something to tell you.” He raised one eyebrow. “You were right.” He smiled like Yoda. Then a booming laugh which turned heads. Then, in a normal tone, “Of course I was right. You just had to figure it out in your own time.” 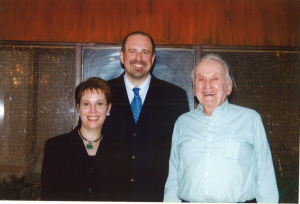 He acted and directed in New York in the Golden Era. Education called, and he taught at a Catholic high school before teaching at a Catholic university. Over and over in the condolences book, students he taught over a span of 50 years wrote about how Boyd changed their lives. He opened our eyes to art, and how art imitates life, and how life is ever-changing, and, thusly, how art is ever-changing. His legacy, for me, is to examine life right now, and write about it, to preserve this time and place.