A Day with the Dogs: Marymount Composition Students Write about Man’s Best Friend 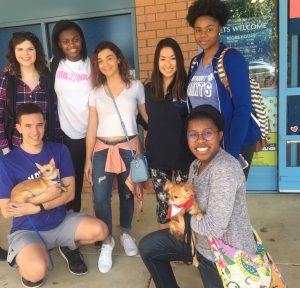 In a sleepy Saturday morning haze, I trekked the long way to the Marymount shuttle stop in front of the Main House. I had a notebook and pencils for taking notes and a bag of trail mix for breakfast shoved into my backpack as an afterthought. Joining my Composition 101 classmates, we boarded the shuttle that would take us to the Homeless Animals Rescue Team (HART) adoption event to meet some very special dogs.

It was only when my peers began to talk to each other about where we were headed that the reality of the situation hit me—I was going to spend the day taking care of dogs! Initially, I had signed up to volunteer just for the material it would give me for the observation essay that Professor Porter had assigned us to write, but I started to think perhaps I could also make a difference by volunteering for HART. Marymount encourages us to serve others; this was my opportunity to serve some rescue dogs who were eager for love and attention. 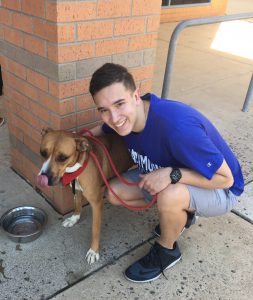 HART rescue dog “Puppy” gets a hug from his Marymount buddy, Brandon Hallahan.

HART is a no-kill rescue group focused on rehoming dogs and cats that are abandoned or surrendered by their owners. Professor Porter had previously introduced the class to HART when she assigned our first essay—a rhetorical analysis of the HART website, examining its mission statement and choosing one of its animal profiles to analyze. Naturally we all fell in love as we browsed the pictures of dogs and cats that were available for adoption. The theme of our composition course is exploring the human-animal connection—what more fruitful way to study this than seeing first-hand the unconditional love dogs have for the humans who care for them?

We pulled in front of the PetSmart in Chantilly where HART hosts an adoption event every Saturday. Professor Porter was out front to welcome us, toting two familiar faces in her bag. We had met her foster dogs Princess and Brady, a pair of Chihuahua siblings, when they came to our class earlier in the semester. Now they sat in her bag with big doe eyes darting from human to human, peering nervously at the other canines that make their way indoors. While we waited for the transport van with the HART dogs to arrive, I walked inside the store to look around and take some notes for my essay. The automatic doors opened with a gentle whirr and I was greeted with the expected PetSmart soundscape. Footfalls on linoleum, birds cooing softly, parents reigning in their children and the muted melody of music from the speakers. That didn’t last very long, as I saw the van pulling up to the curb through the windows, and I scrambled outside. Muffled yips and yaps came from the van and the student volunteers eagerly swarmed around the vehicle to see their prospective pups. When the van door slid back, I was rewarded with a menagerie of puppy personality. Some were thumping their tails excitedly against the cage floors, some were barking, some of the older dogs were just quiet, exhausted from the ride. As students were paired up with dogs, the dogs were given red handkerchiefs with little white hearts to put around their necks signifying they were available for adoption. 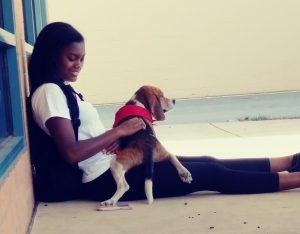 When it was my turn to pick a dog, I made eye contact with a pair of soulful amber eyes that seemed like they belonged to a person. She had a sable coat with a charming little shaved rectangle on her back from where a veterinarian had administered medicine. Her tail was gently wagging from side to side, and she wouldn’t look away from me. I was smitten.

“What’s her name?” I asked one of the HART volunteers unloading the van. She shook her head and told me she wasn’t sure, the dog was a new arrival. Soon I learned the dog was a Shepherd mix, about five years old, named Sophie. She had clearly been used as some sort of breeder dog who had mothered many pups as evidenced by her sagging stomach, and as I stared into her eyes I wondered if dogs feel the same pain human mothers do when they lose their children. Something about her gaze, innocent and maternal, told me yes. My heart broke, but the hopefulness in the tilted-head look she gave me made me smile. Of course, I chose her.

To my delight, Sophie handled like a dream. She was all smiles, tongue lolling out, nearly jumping up in my arms (about 40 lbs of solid dog) out of excitement. I helped her stretch her legs by running around the block with her, and I was amazed by her energy. Being with her gave me a chance to let go of typical college anxieties, and see the world through her innocent amber eyes, accompanying her as she (literally) stopped to sniff the roses. I felt privileged to be let into her little world. 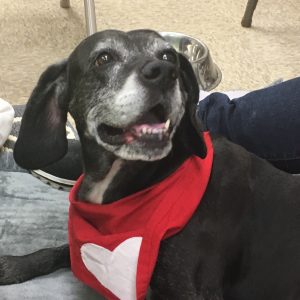 “Lydia,” HART wonder-dog, shows blog author Lee Ward that hard work and determination are essential in order for humans and dogs to overcome their obstacles. Physical therapy is helping Lydia learn how to use her back legs again.

Folks stopped by now and then to inquire about the dogs we were handling.
It was our job to inform prospective adopters about our dog’s age, breed, likes and dislikes, and personality. After an hour of showcasing our dogs, we were called to the back of the store in their lunchroom where Marymount provided us with soda and pizza. One of the dogs was lying underneath the table, looking up at anyone who was taking a slice. We affectionately dubbed him the Pizza Guardian. While I was eating my pizza, I met a very special dog named Lydia. She was all black, dappled with distinguished grey around her snout and feet. She looked at me, brandishing the cutest smile I’ve ever seen, and her foster mother Charlene told me her story. Lydia had ruptured her discs in her lower back, rendering her lower legs paralyzed. She requires extra care, including physical therapy and a wheel apparatus that lets her stand using her front legs. Charlene proceeded to show me the physical therapy she did with Lydia, using a treat to encourage her to lift her hind legs which would improve her muscles. Lydia was completely unable to move her legs just weeks ago, but before my very eyes she was lifting herself, determined to get better! 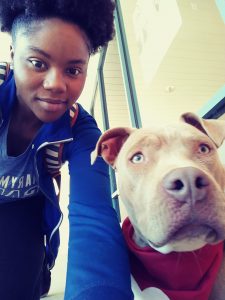 Stare-down selfie! Marymount student Gigi Coltrane and HART dog “Mariah” compete for who has the most soulful eyes.

At the end of the day, we said goodbye to our dogs, and I’d be lying if I said I didn’t almost cry. As we headed back to Marymount, we were all happy because not only had we fulfilled our class requirement to take notes at the rescue for our observation essay, but we had also spent our day doing something good for the dogs. Later we found out that some of the dogs we helped had been adopted! Sophie and Lydia are still waiting to find their new homes, and I hope it will be soon that they, too, are adopted by families that will give them the love they so deserve!

This entry was posted in Events. Bookmark the permalink.

5 Responses to A Day with the Dogs: Marymount Composition Students Write about Man’s Best Friend