Palabras Y Peliculas: Latinx Identity on Screen and in Text 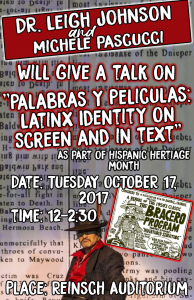 As part of Marymount’s observation of Hispanic Heritage month, Dr. Leigh Johnson, Associate Professor of English, and Dr.  Michele Pascucci, Lecturer in Spanish, explored the complex history and influence of Latinx experience in literature, film, and popular culture. Dr. Johnson began by defining the differences among the terms Latino, Hispanic, and Latinx. She then explained the ways in which Latinx populations have responded to displacement, discrimination, violence, and deportation throughout American history.

Using examples from oral tradition, Spanish language newspapers, and Latinx literature, she discussed the effects of the Mexican War on national boundaries and identity, the role of Latinx people in the American Civil War, and American policy toward immigrants during the depression and World War II. She also offered examples of contemporary poetic voices exploring Latinx experience:

Where is the center of America, anyway?
Are there flowers on a volcano?
You can find the center in my heart
where I imagine the flowers never die
But today the volcano explodes in the way
it has every day for 30 years.
No it is not a sacrifice it desires,
for we already have sacrificed too much,
They want us out of this country
they say we don’t belong here
vamos pa’ el norte
they tell us the American dream is  the truth
but that our stories of escape from horror are not.
–Maya Chinchilla

Dr. Pascucci then highlighted the influence of Latinx experience on film and popular culture. Offering a variety of examples, she focused especially on the ways in which the popular television show “Jane the Virgin” represents contemporary Latinx life in America by integrating Spanish language and Latin culture into its playful representation of immigrant experience in the United States.